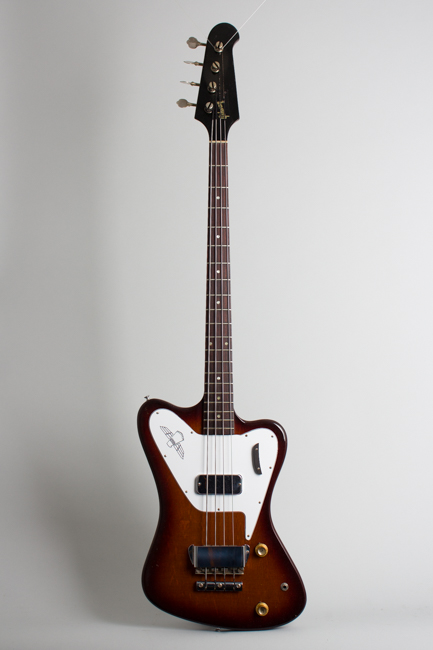 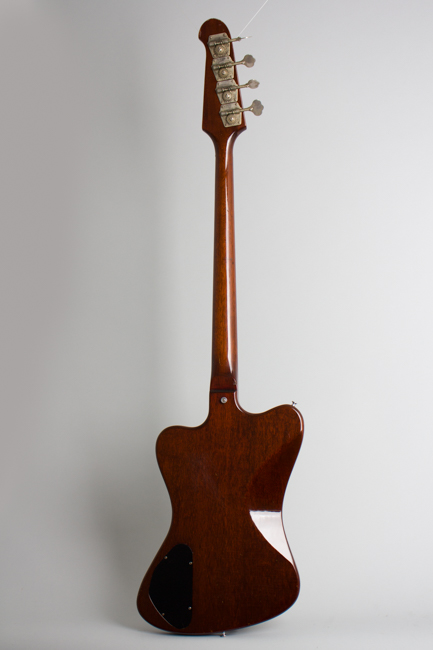 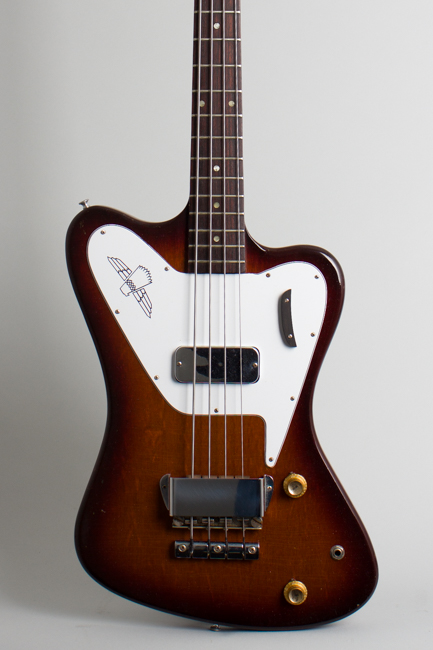 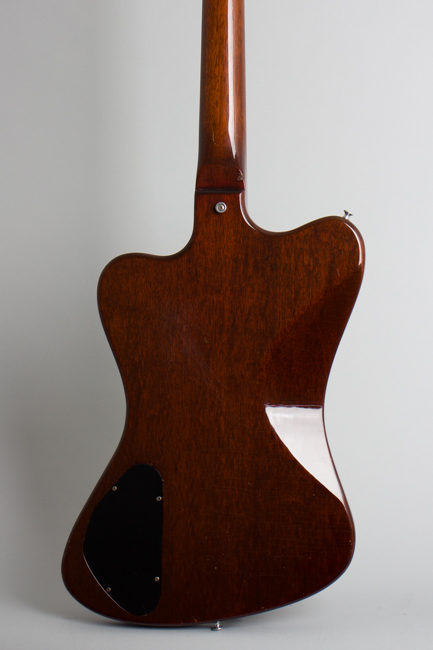 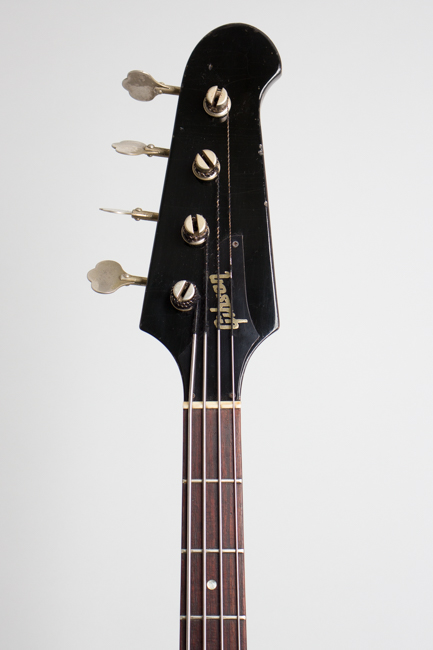 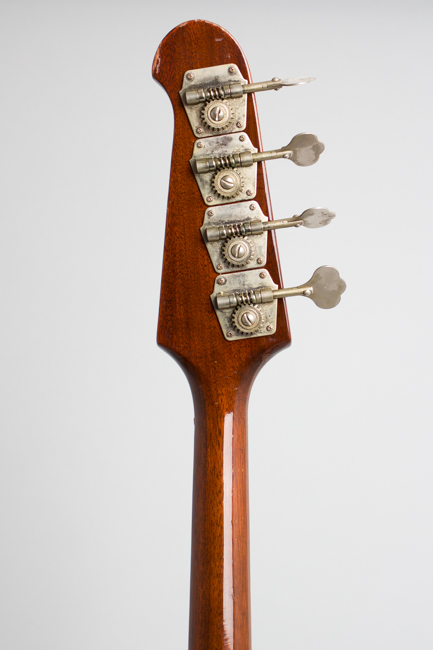 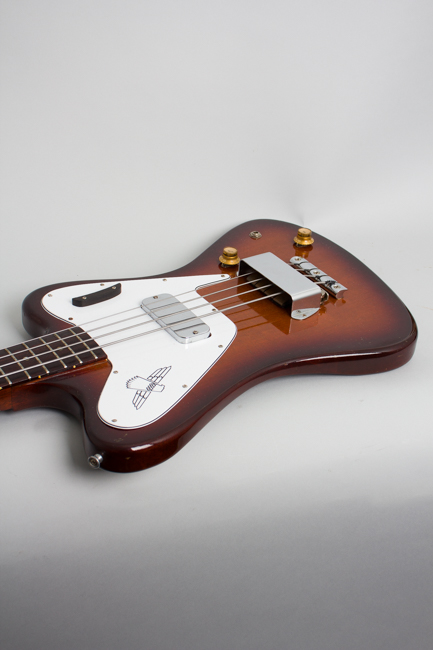 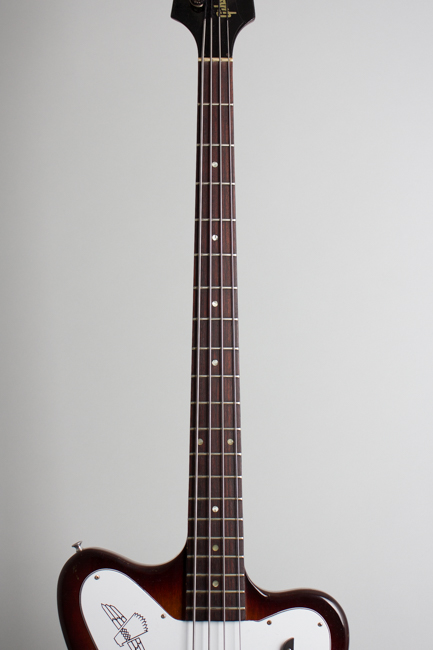 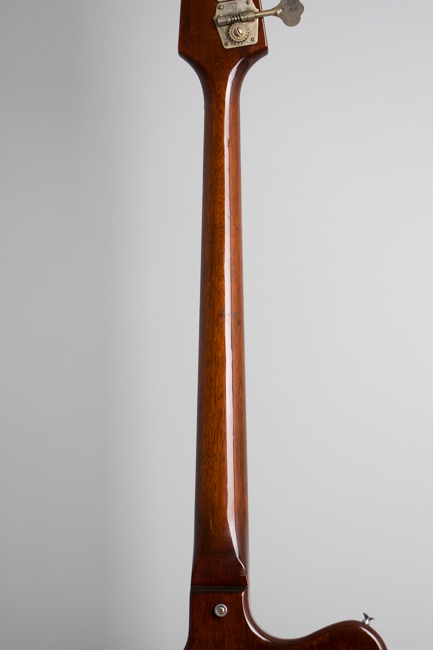 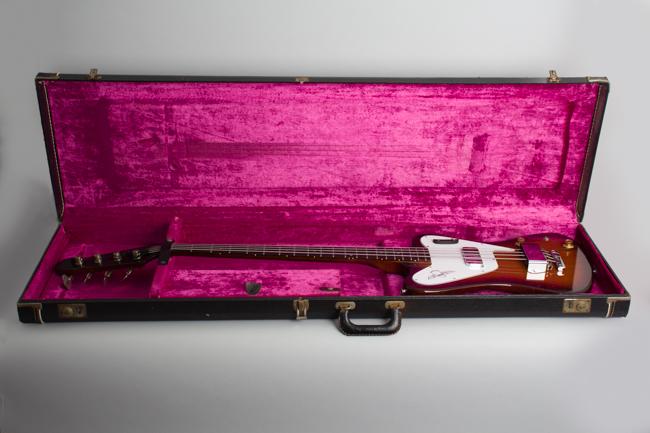 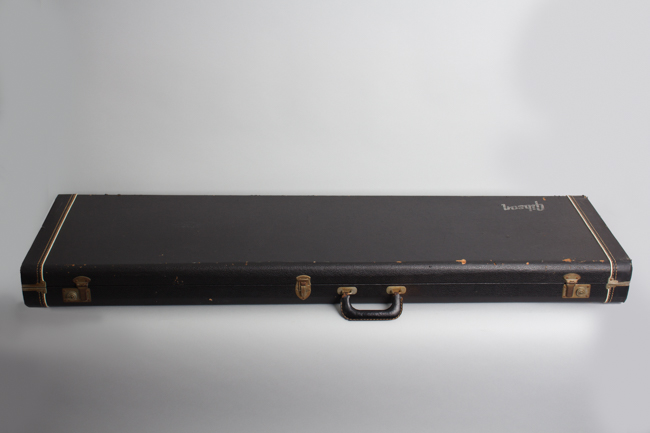 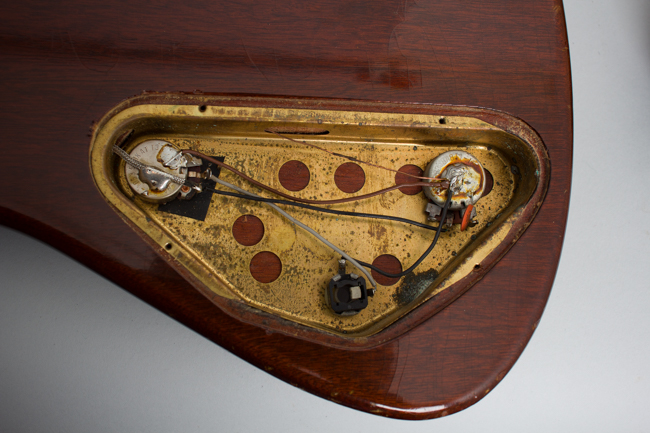 This imposing bass is a 1966 "Non-Reverse" Thunderbird II, one of Gibson's greatest but less heralded 1960s 4-string classics. The Thunderbird was Gibson's first long-scale bass, specifically designed to try to woo customers already accustomed to the feel of Fender basses. Earlier Gibson basses had been short scale affairs noted for their very dark sound; the Thunderbirds have a much more wide-range tone and put a unique Gibson twist on the 34" scale bass concept Fender had pioneered.

This instrument is a second-try "non-reverse" Thunderbird, a lower-priced, simplified descendant of the earlier "reverse" body line that had been launched in mid-late 1963. These new models were introduced in summer 1965, available for only a few years into the late 1960s in ever-dwindling quantities and never considered a sales success. All Thunderbird basses are all fairly rare and many have been damaged over the years making an unbroken example like this all the more delightful a find.

This Thunderbird II is finished in the standard 2-tone sunburst; even in this fairly conservative livery it is a supremely striking bass, built with generous proportions all around especially the slim long-scale neck that seems to go on forever. The huge ax-like headstock mounts four large Kluson bass machines, the first time Gibson had used them. The large, thin-rimmed contoured body is made of mahogany with a one-piece glued-in mahogany neck, making this bass far simpler to build than the earlier laminate neck-through-body Thunderbird design.

The rosewood fingerboard is unbound and dot inlaid like all Gibson basses. The body carries a central white laminated pickguard with a bird logo, in this case a very nice repro (the originals often shrink and crack over time). The Tune-O-Matic style adjustable bass bridge with a separate tailpiece was a new feature exclusive to the Thunderbirds. The single large humbucking bass pickup is mounted in the same center body position as the Fender Precision's, not down by the fingerboard as Gibson had previously preferred. All these second series 'birds were built to the same design; the companion Thunderbird IV simply added a second pickup closer to the bridge and additional volume knob in emulation of the Jazz Bass.

Typical for 1966 this bass has a mix of chrome and nickel-plated hardware; older stock was intermixed with newer parts and installed with no consistency. The tailpiece, bridge cover and pickup are chrome, while the bridge is nickel. The copper mute mounting is still attached to the bridge; the felt mute pads are gone.

The pot codes are not legible but the serial number and features indicate 1966, so this is a prime-year example of this rare 'bird, one of all of 361 shipped out that year. The neck is similar in feel to a Jazz Bass, narrower at the nut but with a noticeable taper nearer the body. The "new model" Thunderbird II was first listed at $239.50 in June 1965, plus $56.50 for the case. This was a full $50 less than the price of the reverse model, and more comparable to the Fender Precision it competed with. Still, sales remained a tiny fraction of Fenders.

This is a truly great playing and sounding bass, with a fast low action and powerful midrange punch that slides into overdriven growl when played hard or cranked. Gibson poetically called it a "throaty bass tone". While the "non-reverse" 'birds have often been discounted, they are absolutely distinctive instruments in look, feel and especially sound. Very light for its size, slim-bodied, fast-playing and incredibly stylish, this Thunderbird II is a super example of this underappreciated Gibson model, not for the player who wants to stand discreetly in the background but a bass that demands its own spotlight! Glenn Cornick, John Entwistle, Mike Watt and (lately) Geddy Lee are noted as users of this unique bass, ignored for decades but recently attracting enough attention to merit re-issues from Gibson.

This bass shows some fairly minor wear overall and remains mostly original; the pickguard is a very nicely done repro complete with the correct bird logo and the tone pot looks to have been replaced long ago. There is no center handrest, and no holes in the pickguard for it. Most importantly, there is NO structural damage or repair; a large proportion of surviving Thunderbirds have suffered broken headstocks and/or body cracks in the thin control area; this bass has NONE of these issues.

The finish has some fairly minor checking, dings, scratches and dents with a swath of belt-buckle scuffing on the lower back but no heavy wear. There is one noticeable chip in the upper neck heel, a shallow scratch above it and a couple of "hanger marks' at the base of the headstock.

The rest of the hardware is original, including the bridge, tailpiece, bridge cover, wood finger rest, tuners and the pickup and wiring excluding the tone pot. The long thin neck is perfectly straight and the angle to the body excellent, which is often not the case with non-reverse Thunderbirds. The original frets show hardly any wear. This is one of the cleaner T-birds we have seen, and also the best player. If you have been looking for one of these imposing 'birds, this is a very nice ready-to-gig example comfortably residing in a 1970's Gibson Thunderbird case, which is solid but with some external wear. Overall Excellent - Condition.
×