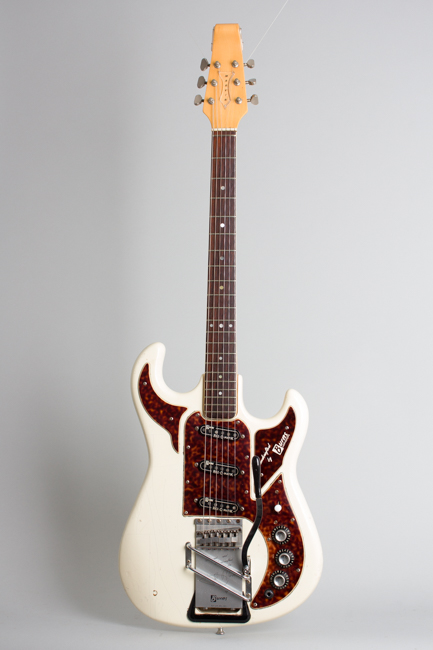 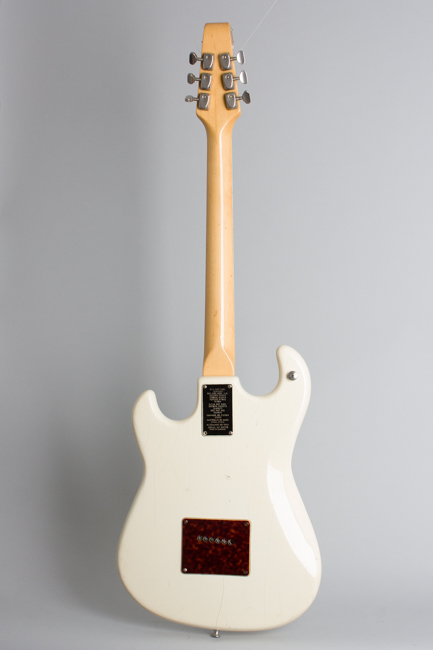 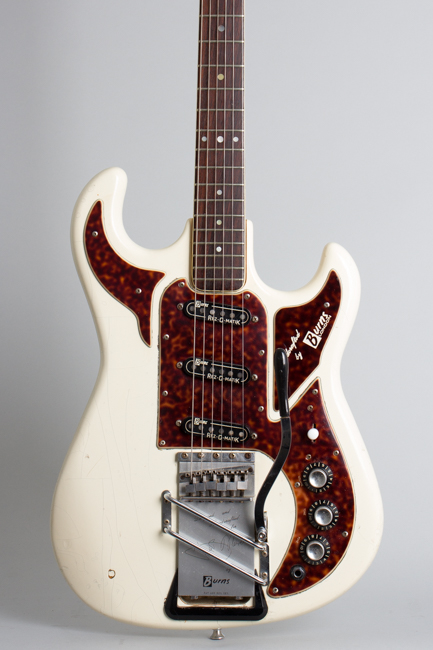 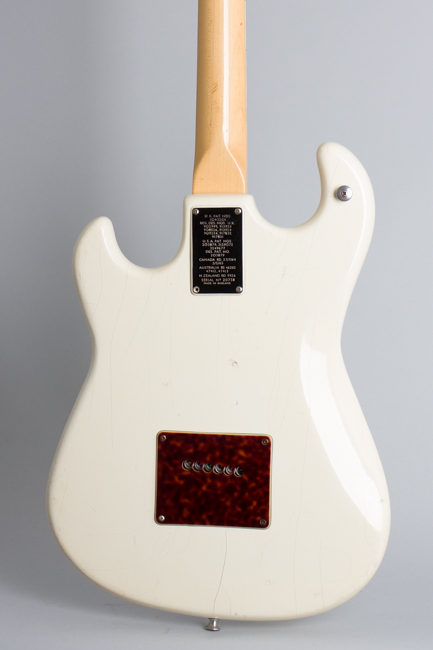 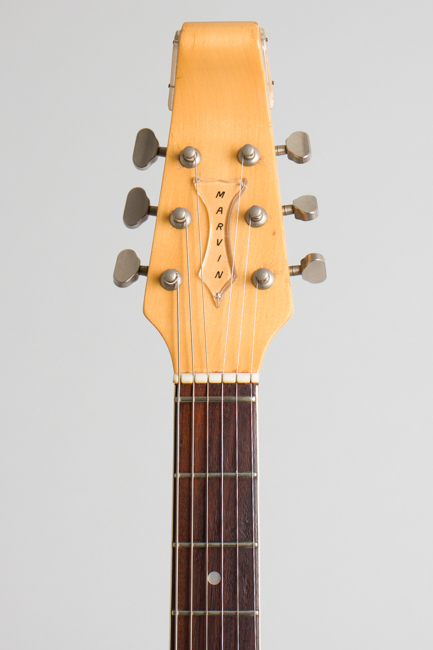 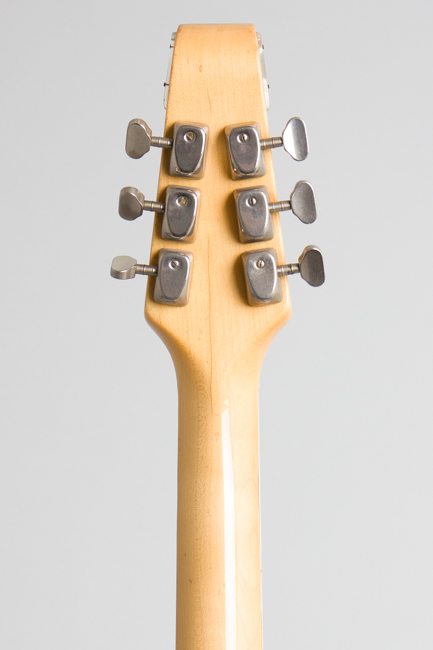 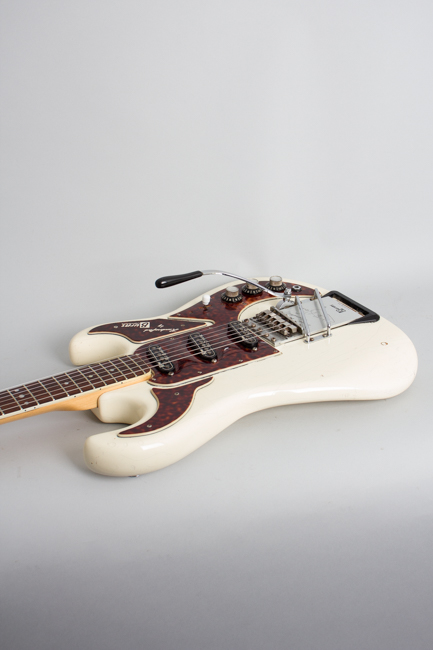 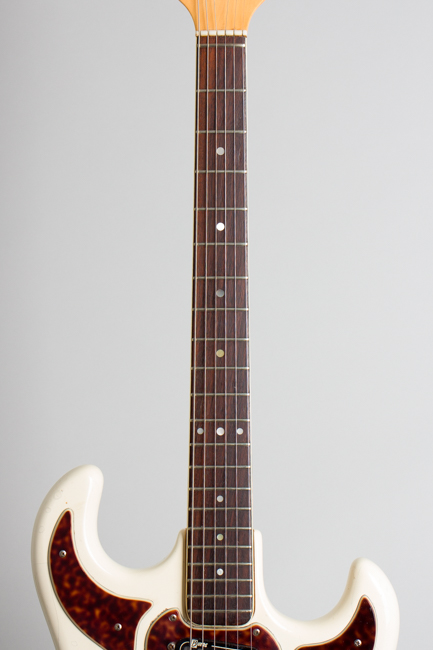 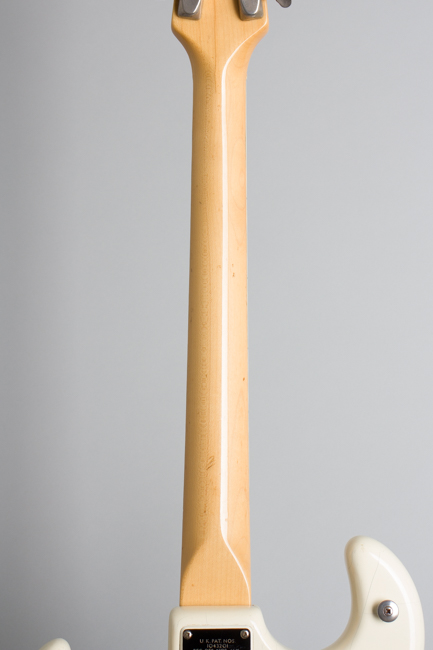 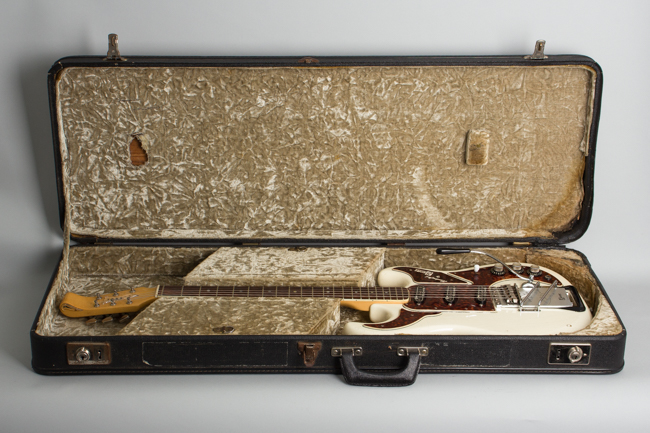 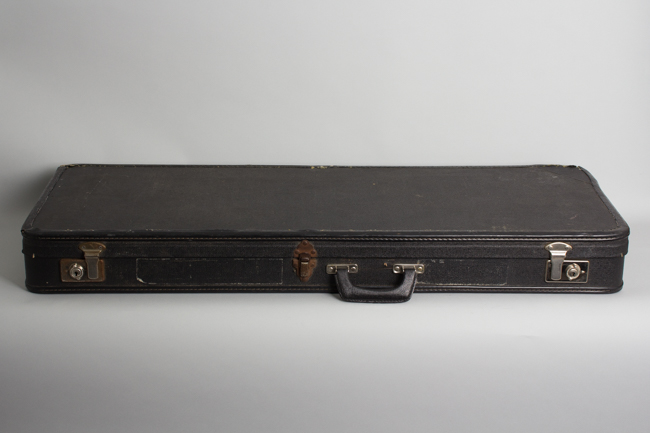 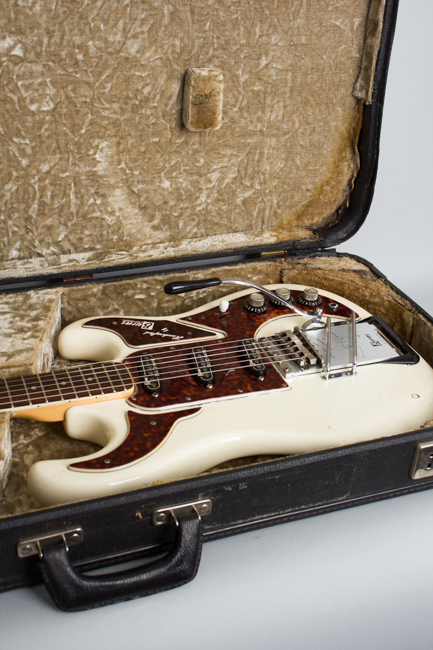 The sleek and striking Marvin guitar is one of the rarer Burns-made instruments, and indisputably the most sought after. The top-of-the line Burns instrument for 1964-6, the "Hank Marvin signature" guitar was designed for the Shadows' leader, and used by him exclusively through the end of the 1960's. It is also one of the best playing and sounding instruments of this eccentric but always interesting line. The Marvin has perennially been the most avidly collected of all Burns instruments due to the Shadows enduring worldwide popularity. This one was made in mid-1967 and originally carried a "Baldwin" logo; like many it has been accurately re-badged long ago with a "Handcrafted by Burns" lower pickguard section, almost certainly sourced from Eddie Cross & Son, Burns original supplier.

Introduced in the middle of 1964, this was the company's new prestige guitar; the former top-of-the line Bison was re-styled to match it. A matching bass was also issued and the Shadows endorsement cemented Burns' position as the U.K.'s top guitar maker. These were expensive instruments; the Marvin's list price in June '65 was over 173 Pounds, almost exactly the same as a Stratocaster. Production was limited; 1964-5 Burns-logo'd examples are VERY scarce today; this didn't change much after September 1965 when the American Baldwin piano and organ company took over. The model remained available until the late '60's'; some features changed in mid-1966 when Baldwin "standardized" the line.

The Marvin is generally seen as Burns' defining design, though arguably the least original as Hank's specs largely derived from the Stratocaster. It is visually striking with its curvier upper horn and eye-catching brilliant white finish with red tortoise pickguards, the Shadows signature look at the time. A welcome lift from the Strat is the longer 25 1/2" scale length, with one extra fret. The three-and-three scroll head was Hank's idea. This 1967 example uses a "flattened" scroll headstock introduced in mid-1966, easier to produce than the earlier carved scroll. The bolt-on neck is finished in natural, with a bound rosewood fingerboard and metal-button VanGent tuners.

The three "Rez-O-Matik" pickups are also Stratocaster-influenced, mated to a Strat-like wiring rig of a 3-way switch, master volume and 2 tone knobs, a move away from Burns' earlier elaborate switching and low-impedance experiments. The most unusual feature is the "Rezo-Tube" vibrato, considered the instrument's defining feature. The long aluminum plate has a knife-edge-bearing front edge which pivots on a block; the entire assembly is sprung from beneath. The strings pass through individual tubes (hence the name) inside the body recess, isolated from the wood completely! As the entire plate moves upwards this requires a "cage" armrest over the top avoid the player's arm interfering. The unit is engraved "Designed and handcrafted for Hank B. Marvin by Burns."

Jim Burns himself was extremely proud of the Shadows' signature instruments. The Marvin handles very well and is an excellent and versatile player's instrument. The Rezo-Tube adds a distinctive quality to the sound, and the pickups are fine sounding in a "Stratty" but never thin way. Even in its Baldwin-era form this ranks among the best of Burns instruments. This one was likely originally sold in Australia, as it is in the very solid Stamford case specific to down under.

This 55 year old guitar has some wear but overall is in generally well preserved condition. The white poly finish on the body has some typical checking; not as heavy as some but with some fairly deep lateral lines. There are a number of dings and dents to the body finish, one noticeable deep circular ding in the top and some chipping around the endpin. The neck finish has some small dings and dents but no heavy wear.

There are a few small splits in the body down by the endpin, the result of the guitar being put down hard long ago. These have been sealed up solidly but are still visible. The pickguard(s) have shrunk up a bit but are fully intact. As noted the "Handcrafted by Burns" logo plate has some age to it but is not original to the guitar. This substitution is quite common on Marvins, as most Shadows fans prefer the Burns logo to the Baldwin marking.

Apart from this and a couple of small hardware pieces the guitar is original. The switch tip is a correct Burns re-issue as is the trem arm mounting screw; the arm itself is original. The hardware and plastic show some typical wear and scuffing (especially the trim piece behind the trem) but no heavy damage. The frets and fingerboard show only very light wear and this is an excellent player with a sound all its own. If you've been itching to play "The Rise and Fall of Flingel Bunt" just right, this is the guitar! The original Aussie case is very solid but shows repair to the bottom section, solidly but visibly done. Overall Excellent - Condition.
×