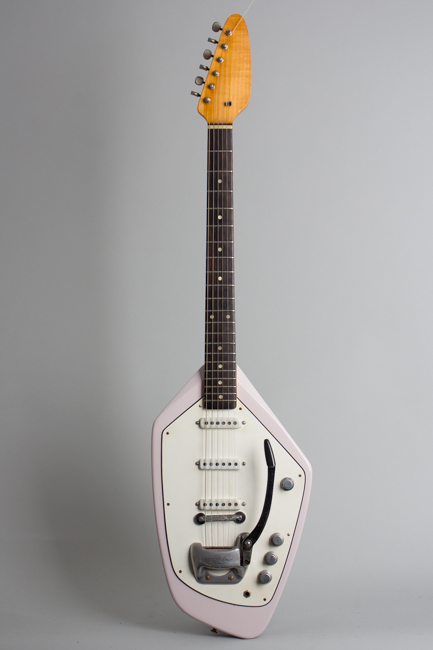 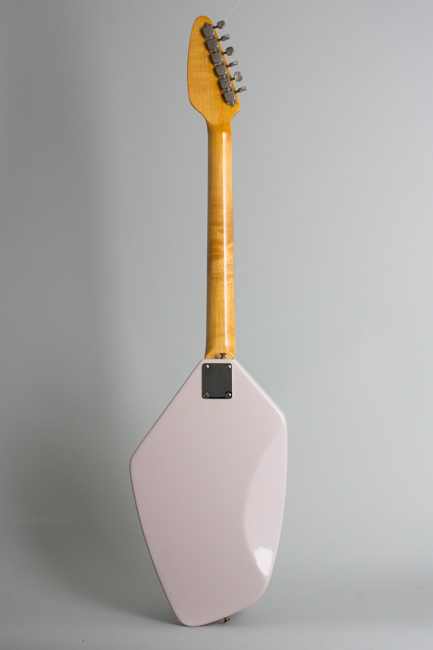 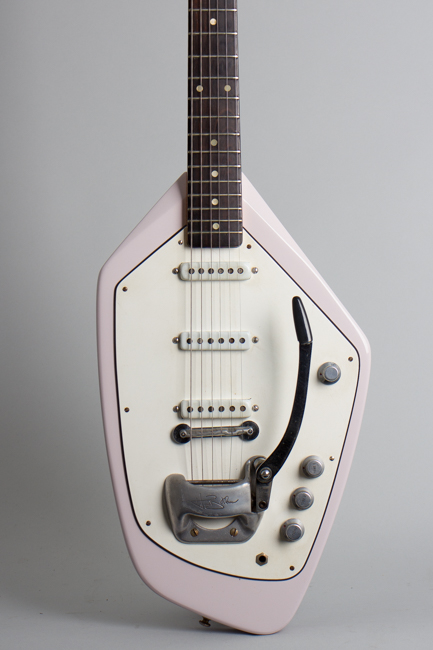 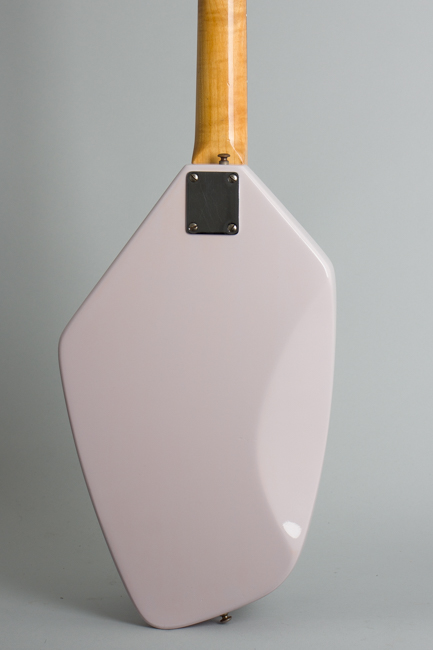 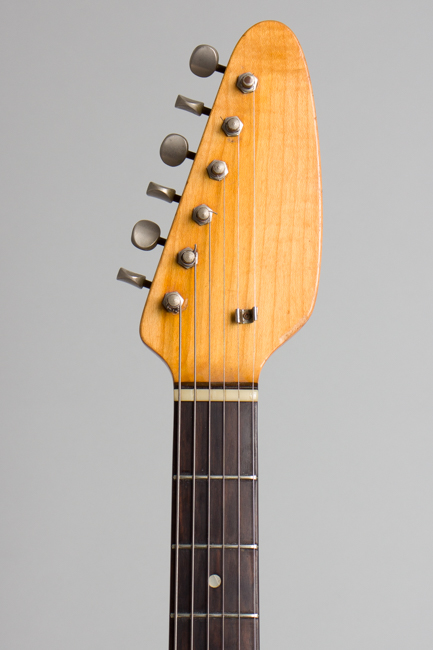 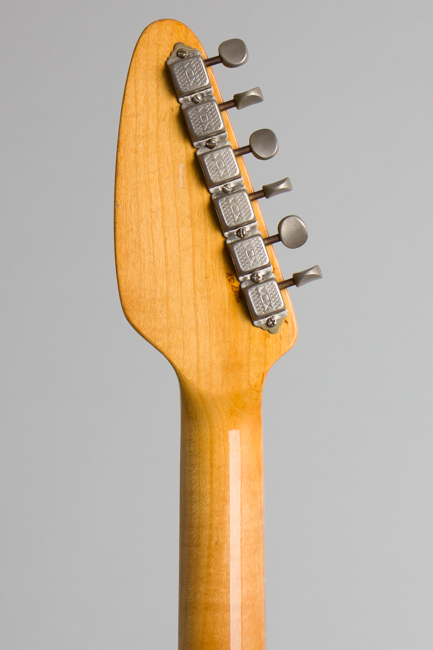 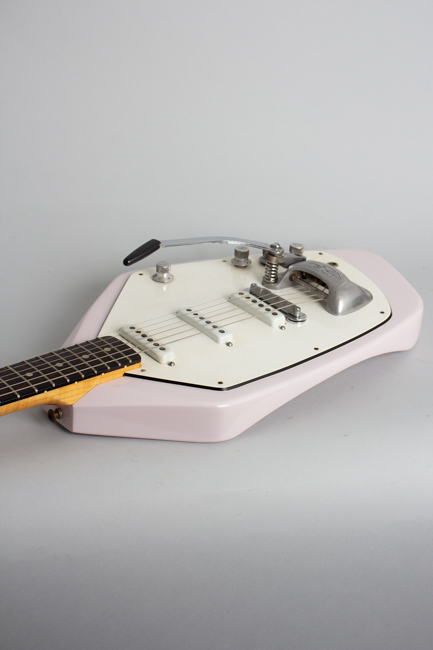 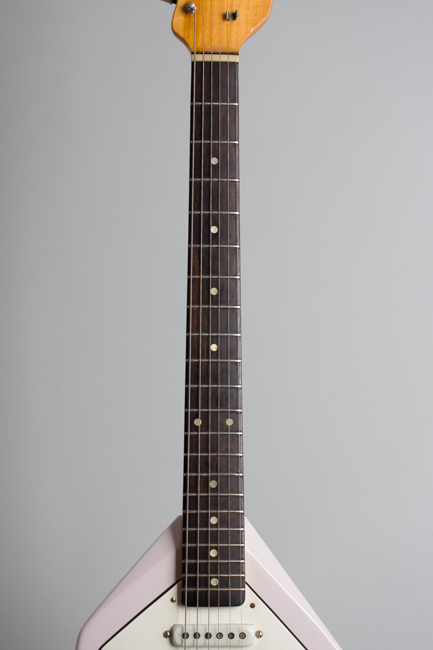 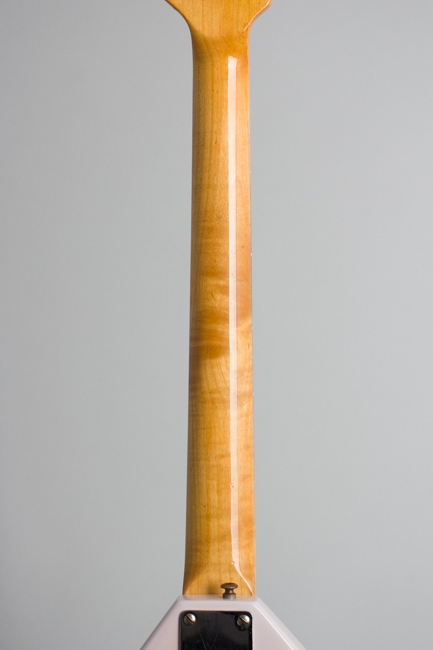 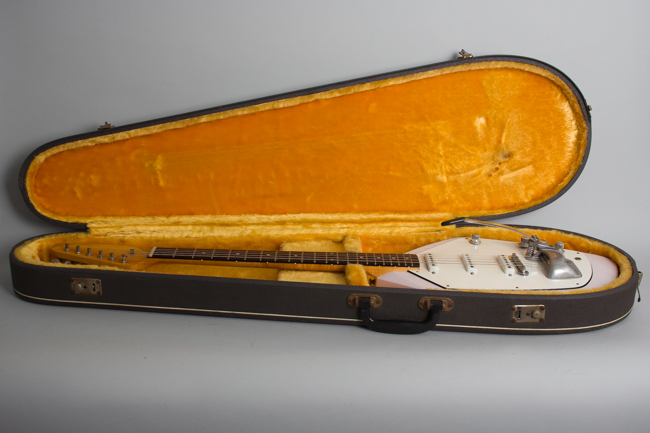 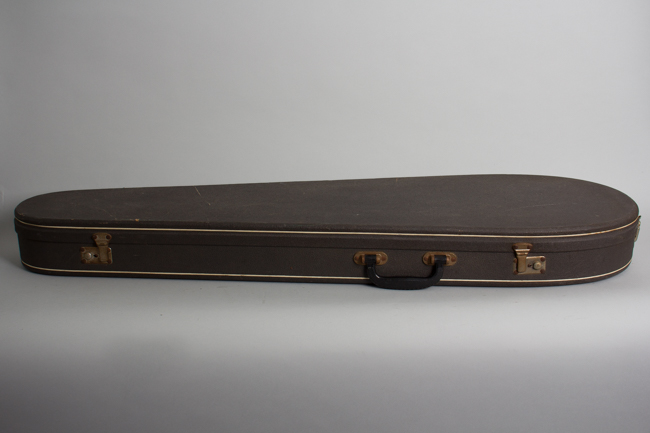 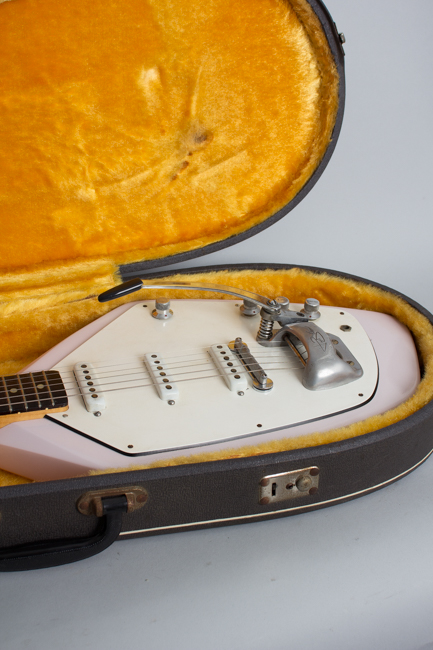 The Vox Phantom remains one of the 1960s' most iconic instruments, at least in visually -- utterly distinctive then and now. Along with the teardrop-shaped Mark series, the abstract trapezoidal-shaped Phantoms were born at JMI in Dartford, Kent in the early '60s. The Phantom VI guitar introduced in 1962-3 is Vox's most recognizable signature instrument. This one dates to the end of 1964 and is a rare fairly early example, especially hard to find here in the US. It has been neatly refinished with some restoration but even so is a better instrument than many later examples.

Like most Vox guitars the design is based on the Fender Stratocaster with the body reduced to an angular minimum, visually effective if not particularly ergonomic. JMI served as Fender's UK distributor in the early 1960s and had ample opportunity to examine the California company's products in detail. The three 6-pole pickups are a case in point; they are nearly identical to 1962 Stratocaster pickups, with a similar but more square-ended white plastic cover. Controls are also a ringer for the Strat: a master volume and two tone knobs, but using a 3-way rotary switch for pickup selection. This one has the earlier "Hank Marvin" Vibrato (which the Shadows guitarist never used!), with the early style solid aluminum bar bridge closely modeled on the Bigsby piece.

The maple neck is date-stamped December 1964 on the heel, made of nice maple with a thick dot-inlaid ebony fretboard. A product of English furniture builder G-Plan, it has a somewhat chunkier profile than those from 1965-6. The distinctive "Spear" Vox headstock is cut flat Fender style and the truss rod adjustment is at the body end. The body is made of light African mahogany, now refinished in a pale lilac color (originally it was white polyester). The pickguard is cut from hard signmaker's plastic, and will never warp and shrink like the later Italian versions.

Unlike nearly all Vox guitars originally sold in the US, this JMI-made example was assembled at the Vox factory in Dartford, Kent. That facility was overstretched even in 1964 supplying Vox product to the UK and world markets; instead of expanding their guitar-making facilities, JMI outsourced the bulk of instrument production to the EKO factory in Recanati, Italy. Eko-made Vox guitars are exponentially more common in the US and to the connoisseur lack the cachet -- and the sound -- of original JMI-built instruments. Thomas Organ in California controlled US distribution of JMI's products and nearly all the Vox guitars they handled would be of Italian parentage, making this genuine 1964-dated UK-made instrument extremely rare in America.

This particular guitar has a bit of a story; according to the original owner it was bought at the sell-off of old stock at the Vox retail store in Hollywood in 1969; the original finish had flaked so it had been stashed in the basement and forgotten. It was stripped and refinished natural hippie-style in 1970, then refinished again more recently in lacquer to a subtly attractive pale lilac color. In any color the Phantom VI is a garage rock classic, one of the most visually striking of all 1960s guitars. This is a far better playing (and especially sounding) example than the great bulk of them, still wicked-looking piece of '60s cool.

This is a restored instrument but not heavily altered from original and a clean looking guitar overall. The finish on the neck is not original but older amber lacquer from 1970 that highlights some flamey grain; there are a few small dings and dents to the surface but no heavy wear. Any headstock markings (likely a simple "Phantom" applique) were long ago lost in the refinish. The neck was also nicely refretted in the distant past plays quite well; virtually all UK-made Vox necks had dubious fretwork originally, so this is almost always a must be playable to a modern standard. The nut is replaced as well.

The body is finished in lilac lacquer; this is a more recent finish although the original white Polyester was removed in 1970. It is very clean with almost no subsequent wear; although not an original Vox color it is very attractive. All hardware appears original or at the very least period. The three pickups and wiring are stock as are the bridge, "Hank Marvin" trem and tuners. The trem arm is present but some of the mounting hardware is a mixed bag. The forward pickup selector knob does not match the others perfectly but is an original '60s JMI part. Over the years we have seen so much inconsistency in the fittings used on these UK-assembled instruments that it's close to impossible to judge what was "correct" originally!

Even with the refinish this is a better-preserved example than most of the "real" versions of this iconically badass guitar, in the original classic oblong case. This 1964 dated example is a neat and rare find, especially here in the US where nearly all Vox Phantoms were imported from Italy, not the UK. This one likely came over in the first batch, and despite a checkered life has preserved its mojo for sure! Restored to Excellent Condition.
×