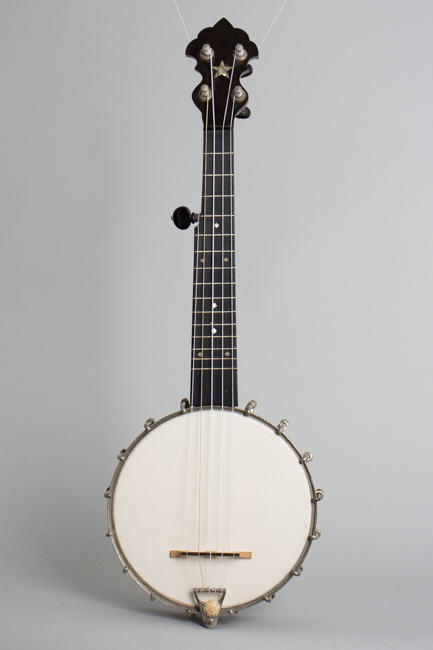 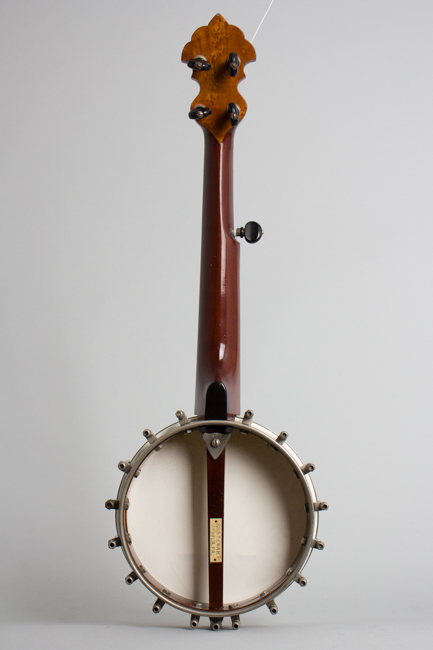 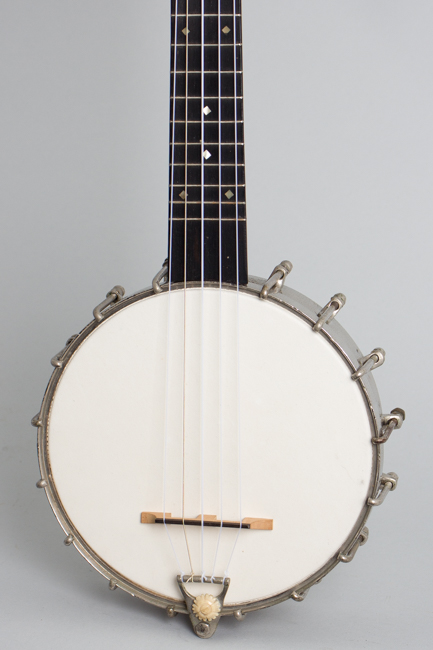 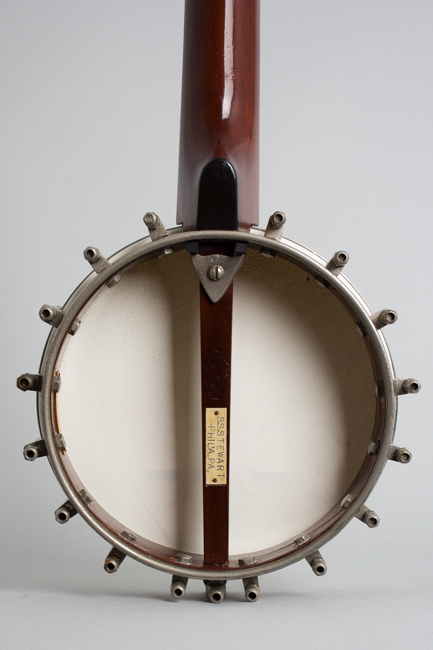 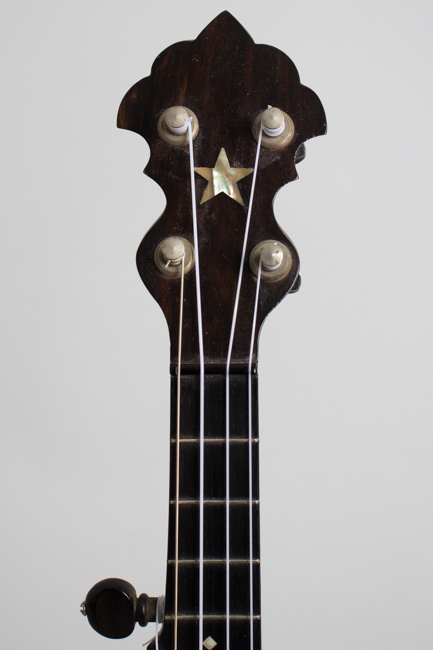 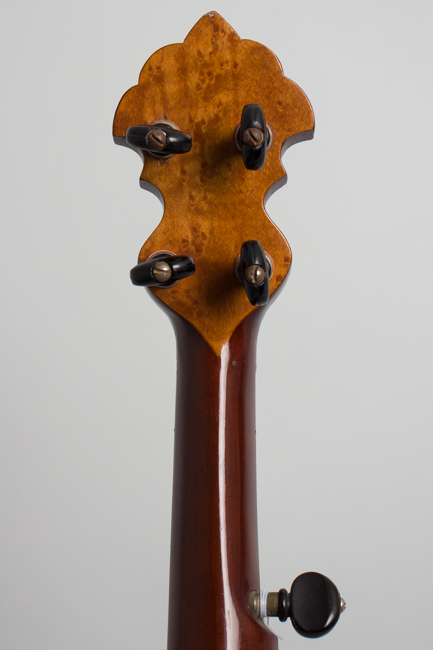 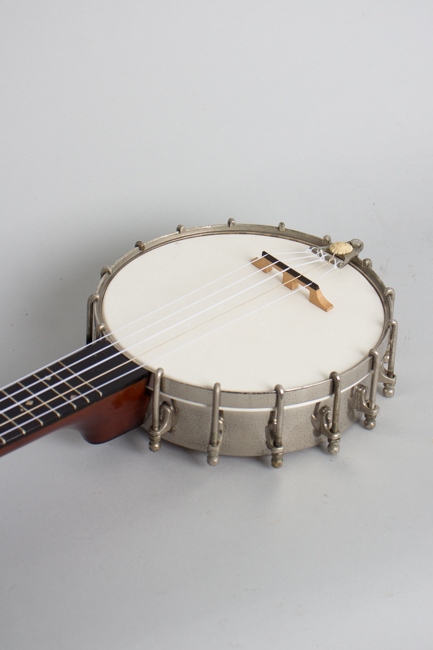 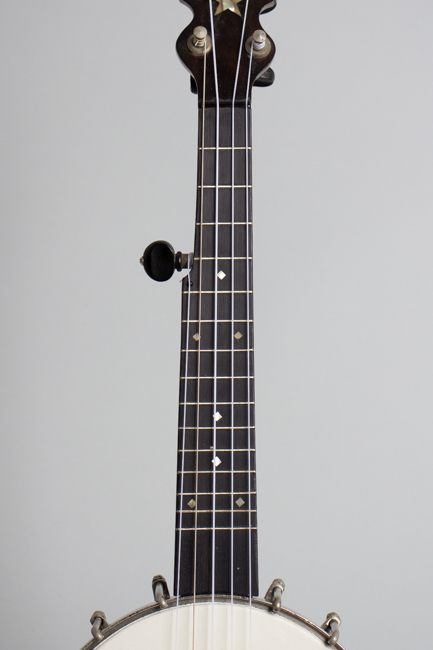 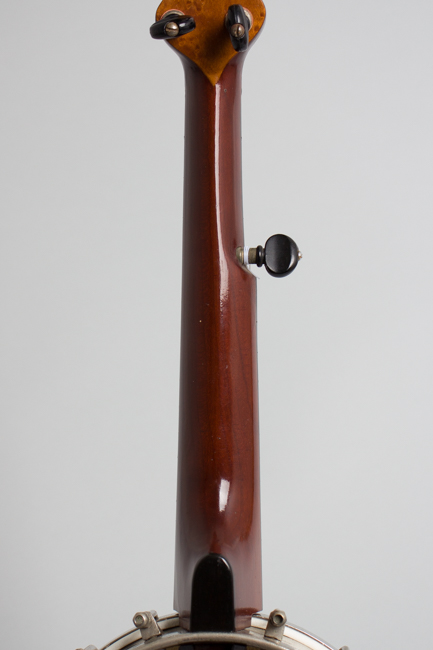 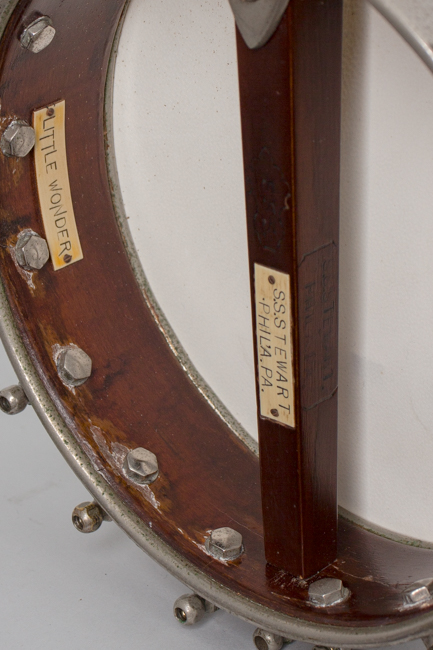 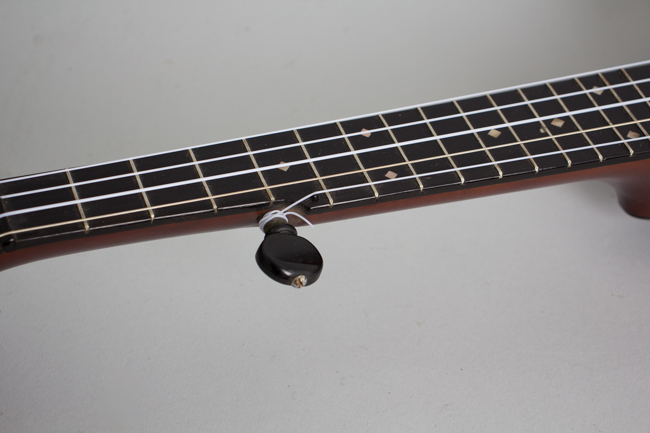 This diminutive Stewart Little Wonder has seen some wear and repair but remains a very rare and interesting (not to mention awful cute!) tiny 5-string banjo. A product of the late 19th century fascination with banjos of all sizes, the "Piccolo Banjo" with a 7" rim and 15" scale was the smallest size generally attempted, though a few even tinier novelty instruments are known to exist. Much of the impetus for building banjos in many assorted sizes came from S.S. Stewart in Philadelphia, but other makers latched onto the idea as well. They were originally intended to be played in large banjo ensembles, with the piccolo taking the high melody or counter melody in the orchestral arrangements.

This mini-banjo does not carry a serial number but has the ivoriod S.S. Stewart plaque as well as the brand and headstock-shaped "SSS" stamped on the dowel stick. It bears a "Little Wonder" ivoroid plate pinned inside the rim as well. The level of decoration is very plain, with just a dot inlaid fingerboard and single pearl star on the headstock. The neck is Stewart's typical cherry with an ebony fingerboard; the spunover rim is fairly basic but typical Stewart fare of the era. The tailpiece is the original "Common Sense" style with the center "walrus ivory" (per Stewart) decorative rosette still intact. This banjo has seen some finish re-work and repair but while almost toy-like in appearance actually plays well and has a lovely and surprisingly powerful sound.

This probably 125+ year old tiny banjo is in very good playing shape but has seen a decent amount of older repair to get there! the inside of the spunover rim has a number of ancient cracks in the wood that have been sealed with what looks like at least two different types of glue. There are some small chips if wood missing just by the neck joint and this area has been heavily glued up; the metal outer rim has some minor bulge distortion in just this area. This sounds worse than it is structurally, as the rim seems quite solid but it is a bit ugly.

The neck, dowel and inside of the rim were refinished long ago, it looks like a maple veneer was added to the back of the headstock at that time. This finish is shinier than the original but not unduly thick. The hardware appears largely original including all but one of the hook/nut sets (one is period but mismatched) the Champion style friction tuners and that lovely Stewart tailpiece. The plating has spotting and minor corrosion but is not heavily worn. Set up with a skin head and NylGut strings this is a lovely little banjo to play with a sparking sound, housed in a modern gig bag. Very Good + Condition.
×