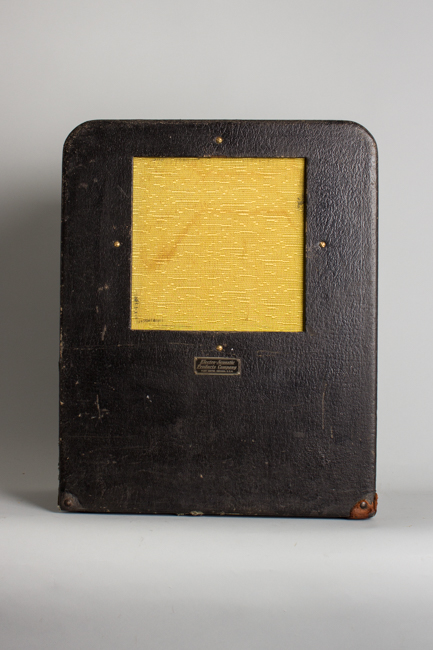 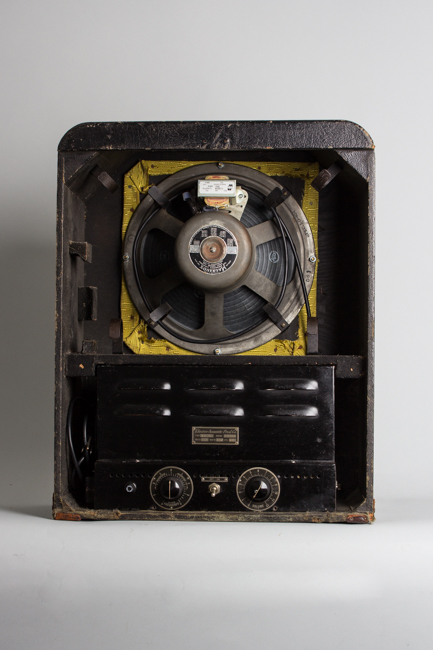 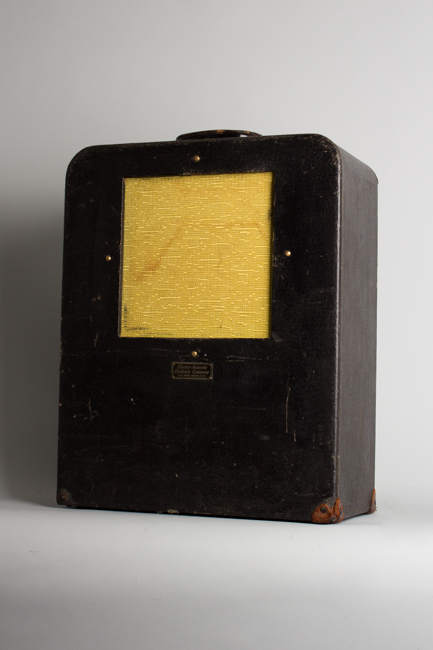 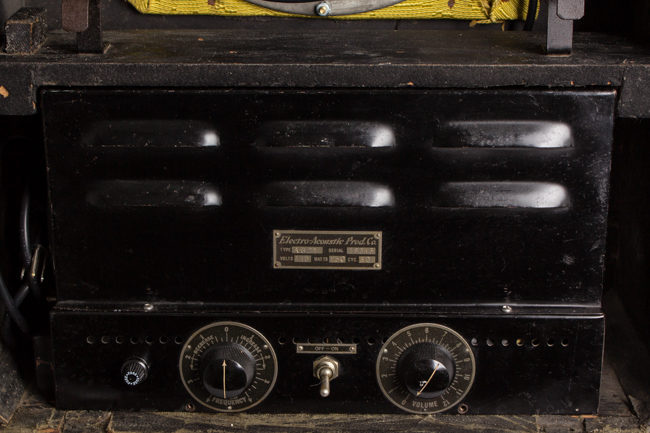 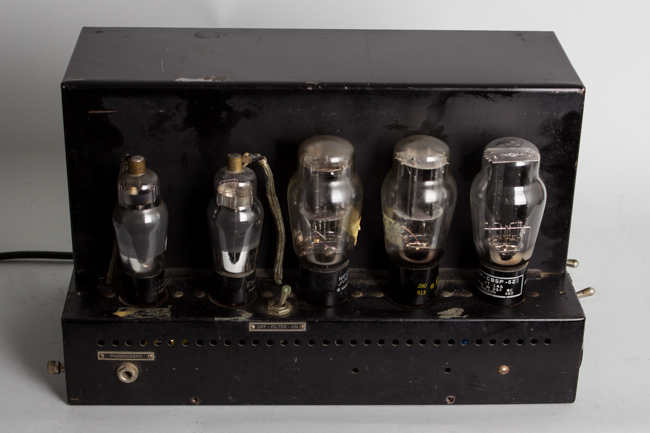 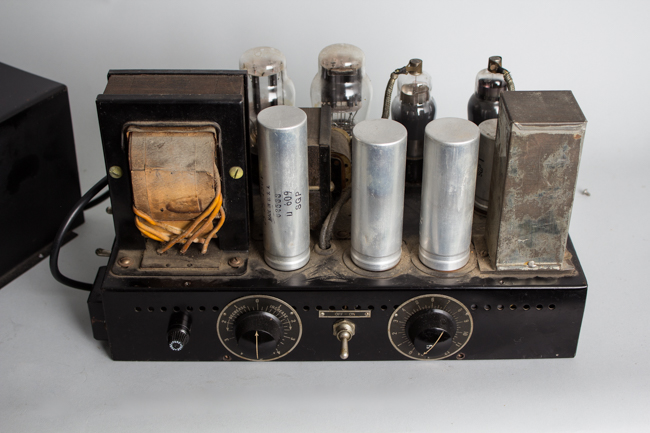 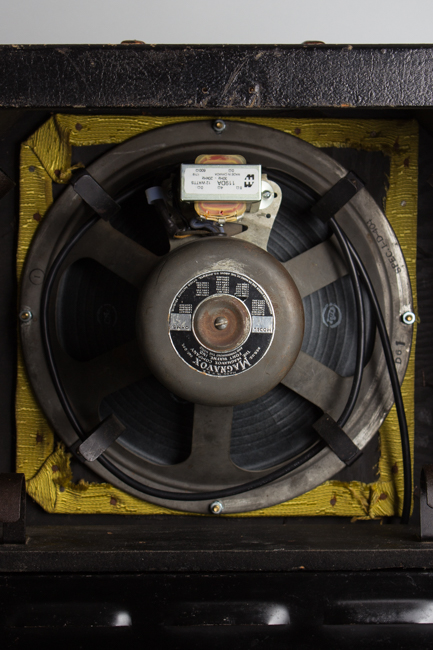 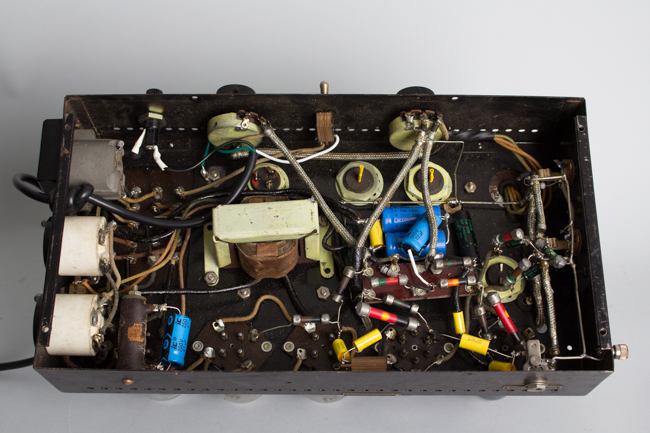 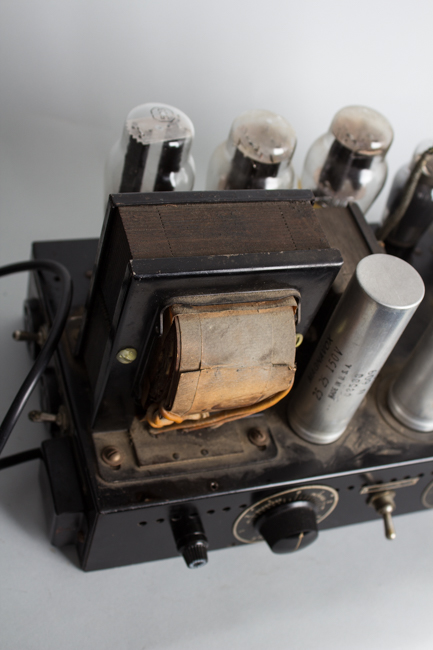 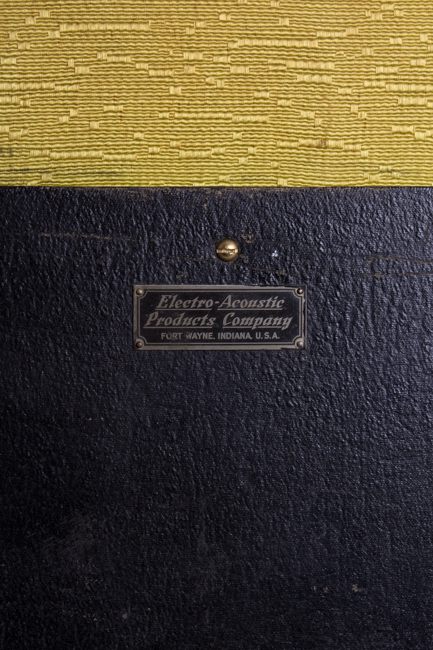 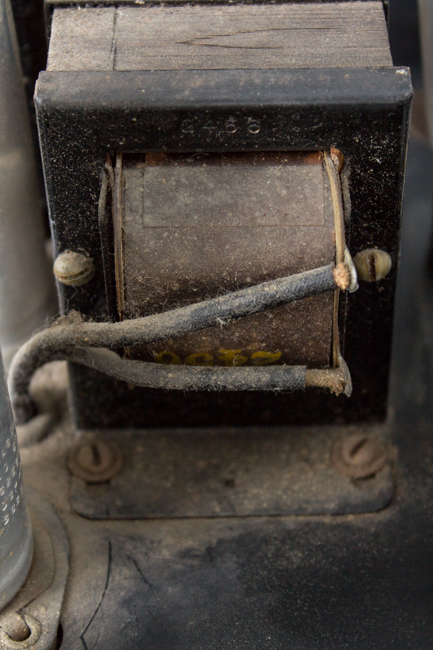 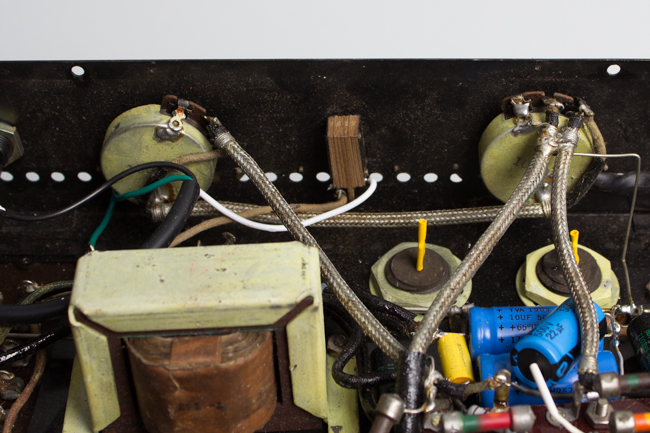 Going into the mid-1930s, small portable Public Address systems and musical instrument amplifiers were generally similar designs. The market for PA's was larger and more general than that for the still-experimental electric musical instruments, and many of the technical developments in this area were originally applied to them. Most usually feature a single volume and (sometimes) tone control and one or two input jacks, a field coil speaker and fairly thin wooden cabinets.

Portable PA systems you could simply plug into available wall sockets appeared in the early 1930s when the introduction of electrolytic capacitors and rectifier tubes enabled economical built-in power supplies. Previously, such amplifiers required heavy multiple battery packs and were far less practical for everyday use.

This particular amplifier is an early high-quality Public Address unit labeled as a Model A821, made by Electro Acoustic Products Co. of Fort Wayne. Indiana. Based on availably records they also had offices at 103 Park Ave. right here in New York, NY. The company was a subsidiary of Magnavox until 1938, when it was absorbed during the reorganization of the parent companies and the brand disappeared.

This model A821 was likely made in the early-to-mid 1930s and features two input jacks (added for modern convenience, replacing the original proprietary phenolic microphone sockets), a volume control and a "high frequency" control (the same as the later commonly labeled tone control in most guitar amps from the 40s and 50s). The amp unit can be easily dismounted from the speaker cabinet if desired. While originally designed for use as a PA it makes a dandy combo amp today, 85 or more years along.

The overall sound is pleasingly lo-fi and the breakup amazingly smooth, ranging from a velvety "old-timey" dark/clean-to-mild breakup to more aggressive searing compressed distortion when pushed. Overall it offers a very different tonal character than the more familiar Gibsons from that era, or any other amp we've heard for that matter. We could easily see this becoming a studio favorite, even a "secret sauce" in the right players arsenal!

Overall this unit is well preserved for its age, showing wear but no major damage. The fabric-covered wooden cabinet has its fair share of scuffs, tears and soiling but remains structurally well-intact and from what we can tell, the yellow cloth grill covering is original as well.

The field coil speaker is the original Magnavox which has been professionally reconed and restored. The output transformer residing on the speaker frame is a newer Hammond 119DA specifically selected for this speaker. The amp remains otherwise original, including the power transformer and choke that reside within the chassis. The tube compliment features two 2A3 power tubes in parallel single ended, known and used as a very high-quality triode in the hi-fi world, yielding around 10-15 watts of power.

The amp has seen typical maintenance in order to ensure safe and reliable operation in the modern age. This includes replacement of all electrolytic capacitors (some of which were nearly a 100 years old at this point!), a modern fuse, as well as typical cleaning of all sockets, pots and jacks and biasing to spec. While an eccentric piece by modern amplifier standards this is a very high quality unit, a considerable rarity and an undiscovered sonic palette for the adventurous player looking for a special one-of-a-kind sound. Very Good + Condition.
×