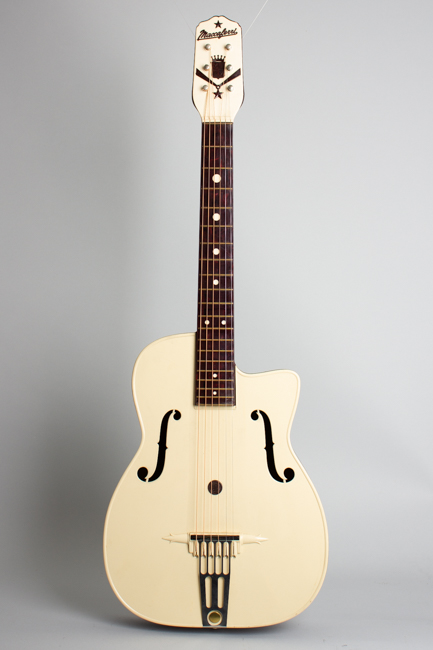 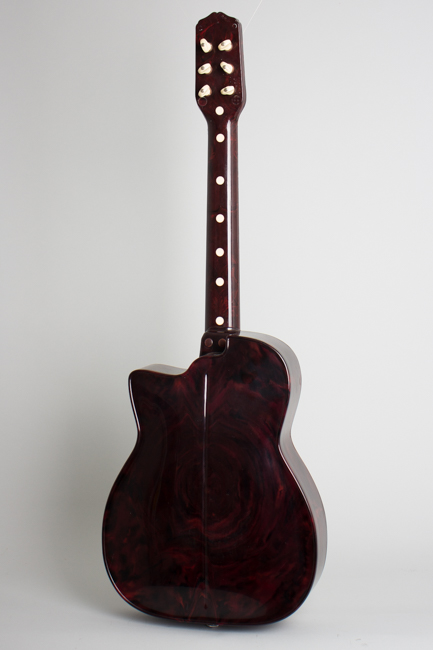 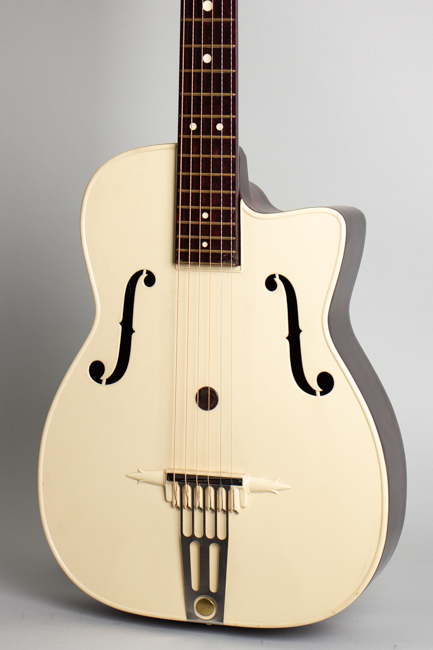 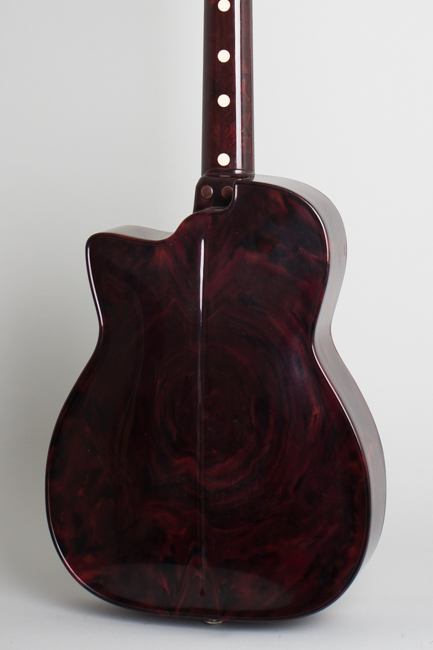 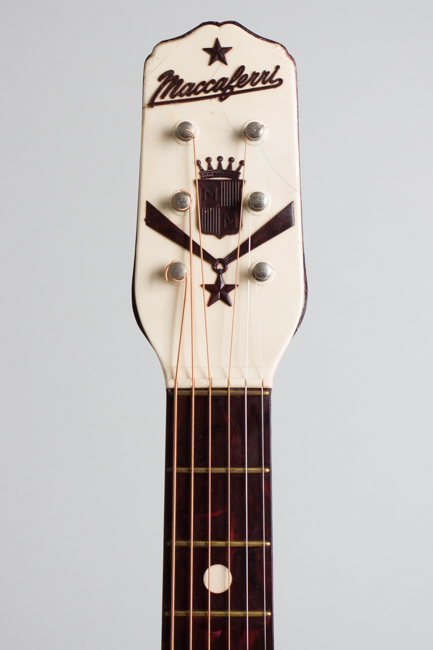 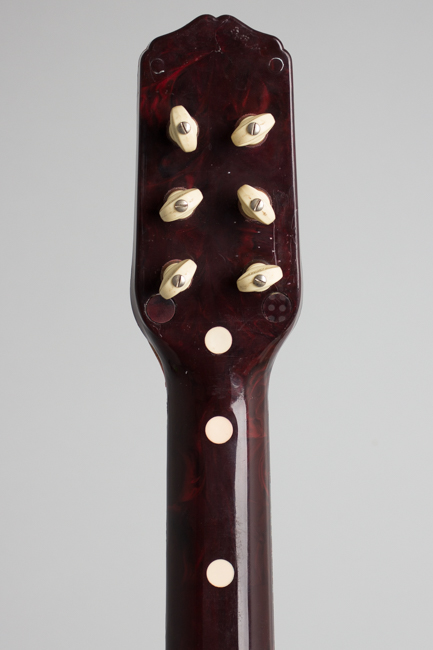 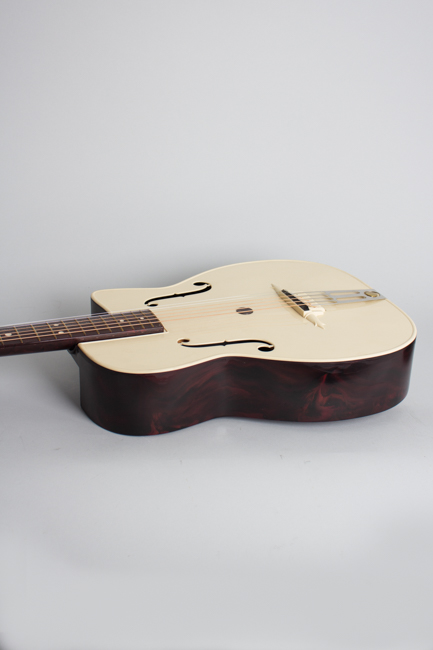 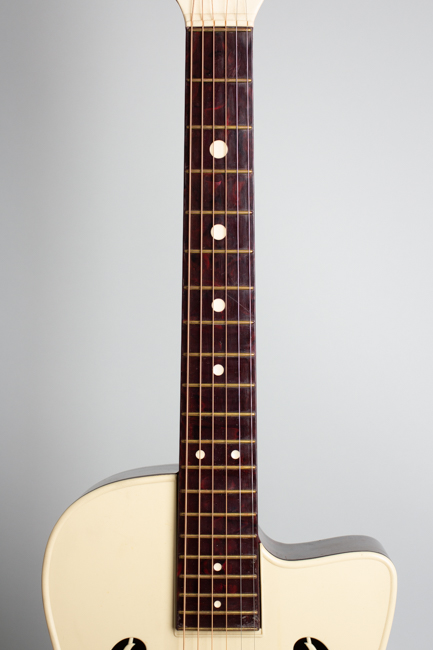 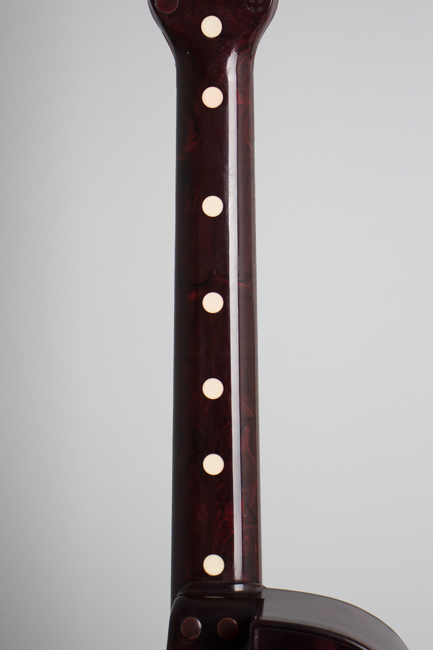 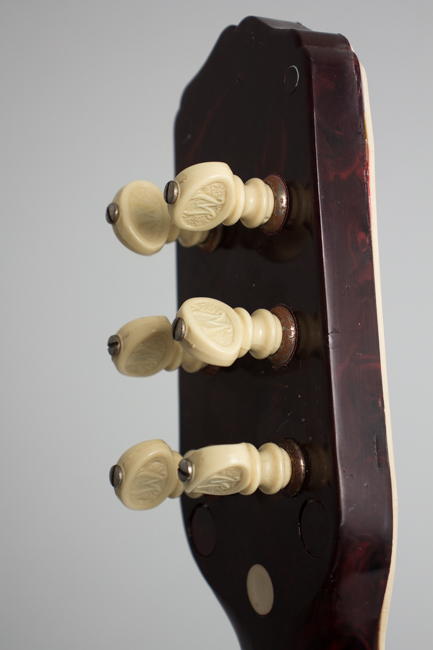 In the 1940s and early '50s Mario Maccaferri made a fortune with plastics. His Bronx, New York factory turned out millions of plastic clothespins, reeds for clarinets and saxophones, ukuleles and finally; Guitars. Maccaferri remained a guitarist and luthier at heart, and after selling ukuleles by the truckload (with thanks to Arthur Godfrey) set his sites on manufacturing a playable plastic guitar. This model G40 was his pride and joy, an arched top, f-hole guitar designed to sell at the popular price of $39.95.

The guitar is in many ways reminiscent of his original 1930s Selmer design, smaller overall but with a similar body shape and layout. The main difference is twin F holes located forward on the soundboard, in place of the original "D" shaped soundhole. And, of course that it is made of molded plastic instead of wood!

The neck is made of solid plastic with an integral metal core, and a clever bit of engineering makes the angle adjustable to raise or lower the action with a fixed bridge. The colors in the two-piece Styron body are intended to resemble rosewood on the back and sides and a 'spruce' top. The geared tuners are mostly hidden in the hollow headstock, which is proudly emblazoned with the Maccaferri logo.

The Maccaferri guitars were officially launched in the spring of 1953. They were heavily featured in The Music Trades likely mostly due to the novelty factor; it was the Populuxe '50s and better living through plastic was everywhere! While they played and sounded amazingly well, the novelty and toy aspects meant very few players saw them as a "serious" instrument, public reaction was dismissive and sales poor compared to the ukuleles. A miffed Mario Maccaferri took his toys and went home, discontinuing sales entirely and holding the unsold stock at his factory for decades. In the 1980s many were unearthed and sold off, and since then have become a whimsically beloved part of the guitar experience. And, truth be told, a surprisingly good instrument, considering their plastic origins!

Overall a this is a nice clean and great playing example of this molded miracle. There are some scuffs and dings on the body and a couple of the headstock side seams are slightly open but everything works as intended. It plays very well and sounds, well, as good as these do and a lot better than most people expect! Generally Excellent Condition.
×