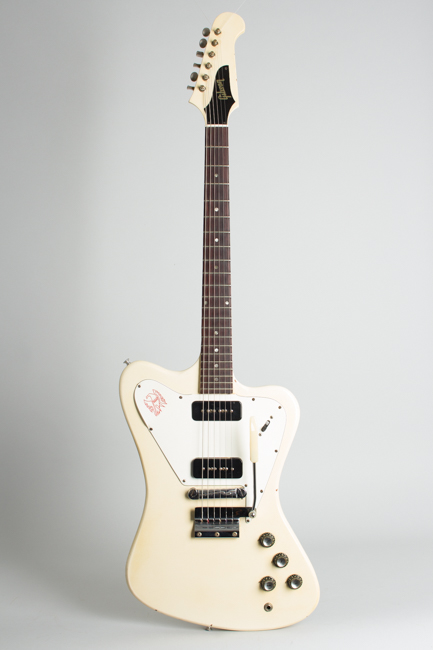 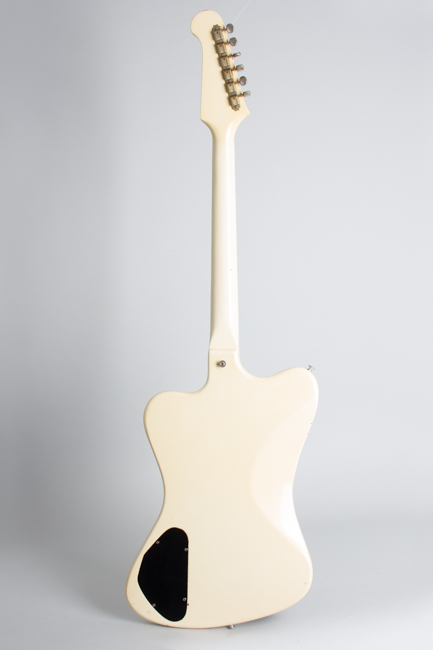 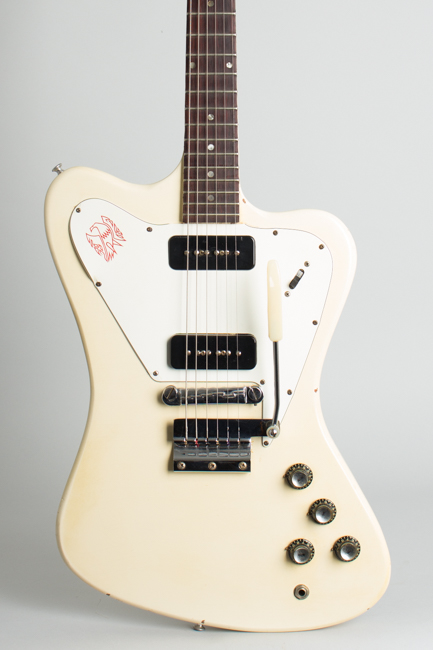 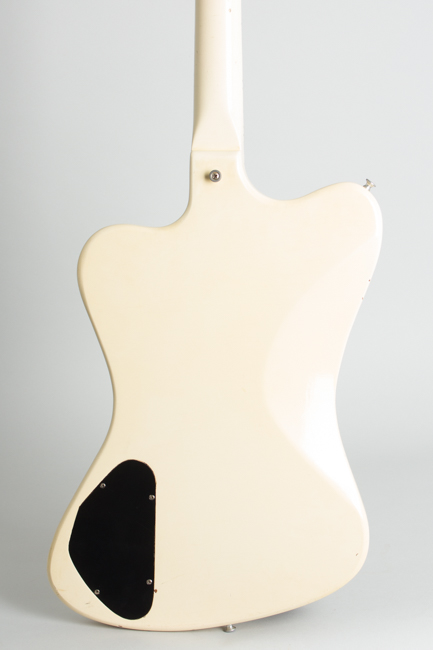 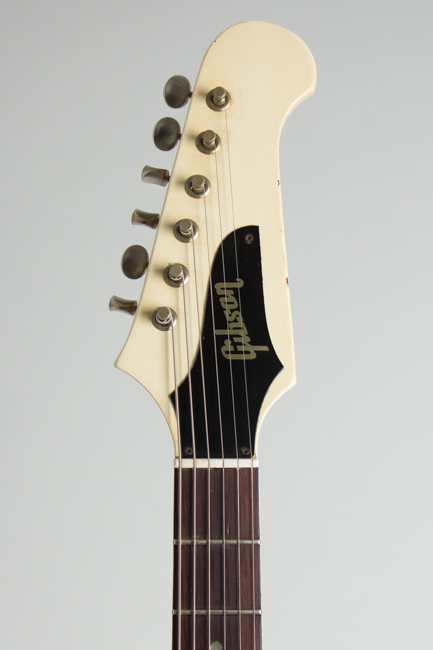 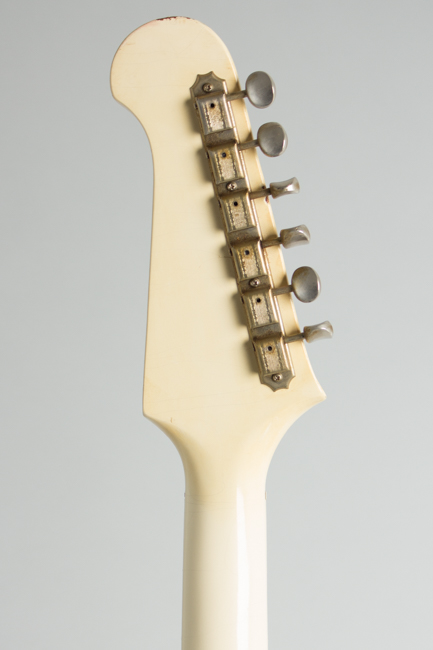 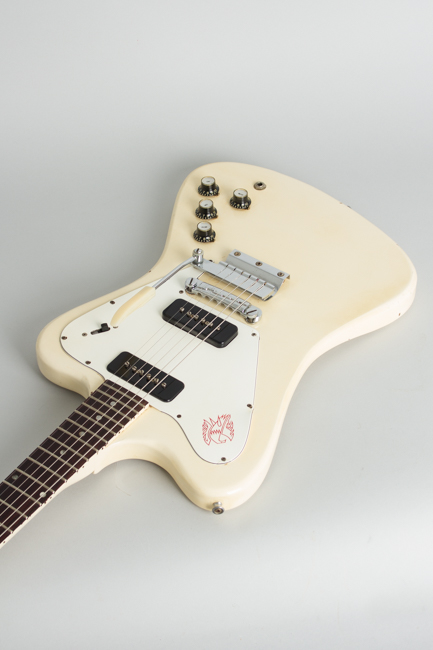 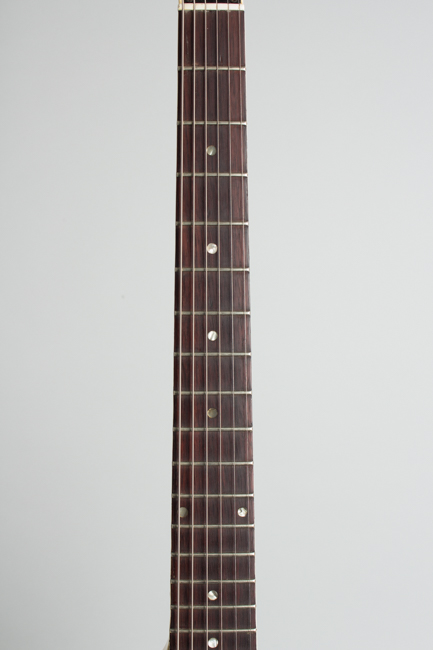 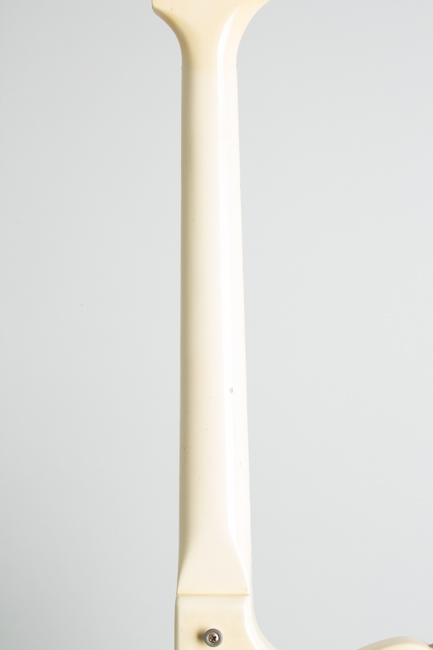 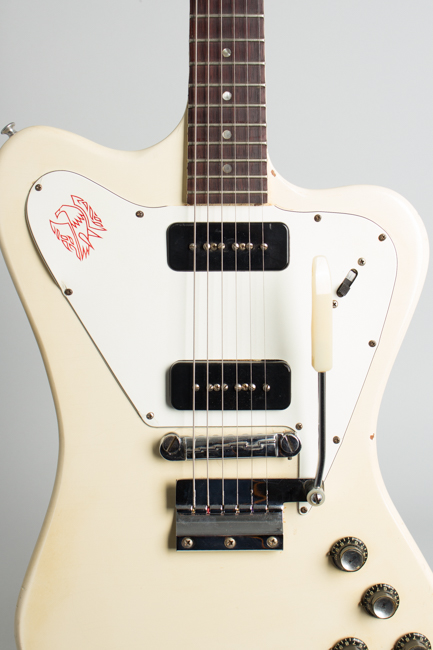 One of Gibson's less heralded 1960s classics, the second-try "non-reverse" Firebird models were lower-priced, simplified, but still stylish variations of the earlier "reverse" body guitars. Introduced in summer 1965, these new-model Firebirds remained available into the late 1960s in dwindling quantities, but were never really considered a sales success. This example of the most basic model Firebird I is finished in a striking Polaris White, one of the rarer of the special custom colors advertised as available on the line but in practice not often ordered.

The body is one-piece mahogany with a standard glued-in neck, far simpler to build than the earlier laminate neck-through-body Firebird design. The I features two plastic-covered P-90 pickups and all chrome-plated hardware, including Gibson's "short" Vibrola unit. This guitar also has the unusual (for a Gibson) original slider switch used on most non-reverse Firebirds in place of the more common toggle.

The visible pot codes on this particular guitar date to the 39th week of 1965, and the serial number indicates the same year, so this is an early example of this style 'bird. The knobs are the older style metal capped, clear plastic back-sprayed in black instead of gold on this custom-color example. The neck is considerably narrower than earlier reverse Firebird necks, but not quite as insubstantial, feeling as period SG necks.

This is a great-sounding guitar, with P-90 pickups that really growl when cranked. While the "non-reverse" Firebirds have often been discounted in Gibson history, they are very distinctive guitars unlike any other and are often excellent instruments. Extremely light, fast, and very stylish, this super-striking custom-color Firebird I is a fine example of an oft-underappreciated Gibson model, an unrepentant rocker's guitar.

This guitar is quite clean overall and all original except for a recent refret. There are some small dings and dents, but overall the fairly fragile white finish is nicely intact, faded a bit to a more creamy hue and with some light checking. The pickguard has shrunken somewhat as is common for these, and shows a few patched spots in the corners -- still in better shape than many! The red-painted bird logo is still very sharp and clear; many have faded out over time. This is not only a very good playing 'bird, but quite the looker. Supremely striking and majestic in its Arctic White livery. Excellent Condition.
×