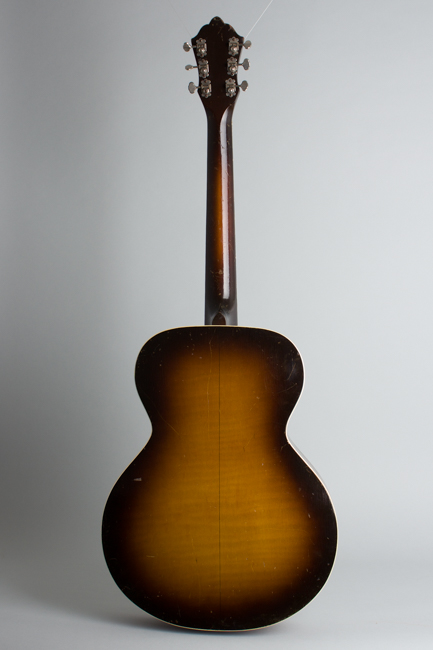 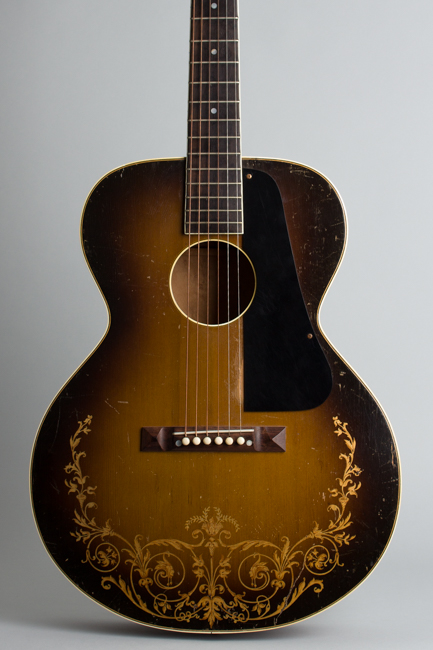 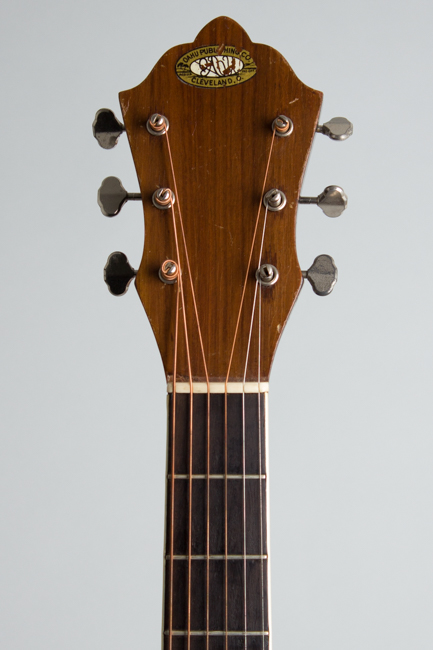 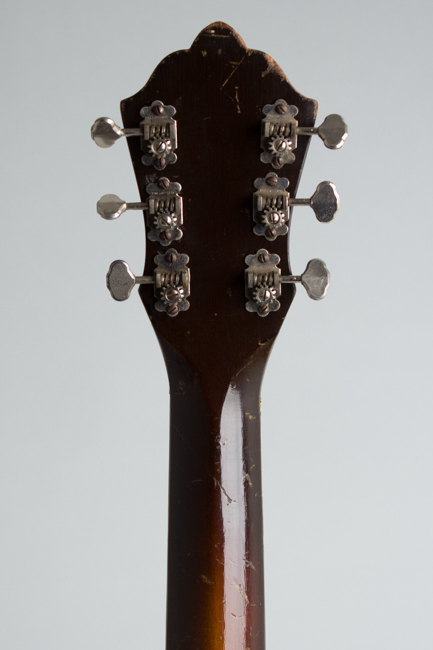 This Oahu-branded Jumbo guitar is a very rare variation of this Chicago classic. It has NOT undergone conversion from an original Hawaiian setup; it is a dedicated, purpose built 14-fret neck Spanish guitar. Cleveland-based Oahu (as the name would imply) specialized in teaching Hawaiian guitar and the great bulk of the large-body instruments made for them were Hawaiian guitars; this Spanish style was ordered in far smaller numbers.

This example is the second large-body 15 1/2" version of the classic Oahu Jumbo with a ladder-braced spruce top and laminated maple body. This guitar was originally sold through Oahu's chain of teaching studios for a whopping $98.00, quite a sum in the late 1930s, and was touted as a fully professional grade instrument. Certainly for this price, it ought to be -- other offerings in the same range would have been a Martin D-28 and Gibson Advanced Jumbo!

The original Spanish neck on this model is 14 frets to the body with a rounded "V" contour and a bound rosewood fingerboard, slimmer than the square Hawaiian version and more comfortable to play, unless a conversion included slimming. The dark sunburst spruce top has triple binding and an elaborate gold scroll decoration on the lower area, with the back and sides subtly sunbursted as well. There is a black plastic pickguard rather inelegantly screwed to the top, easily removable if desired.

The elaborate carved headstock shape is a trademark of this model, and carries early "Pat' Pending" Grover tuners with a cloverleaf base and "butterbean" buttons. This instrument was in the highest echelon of what Kay in Chicago built, and while perhaps less sophisticated than many high-end competitors, it remains a very nice example of one of the 1930s' most distinctive looking guitars.

This guitar shows playwear overall but remains in well-preserved original condition. There are small scuffs and dings overall, a couple of long scrapes to the back, and some pickwear just at the top edge of the pickguard. The stencil work to the top is in very good shape. The "butterbean" Grover tuners are original (which is rare with these!) and the bridge appears to be a well-done reproduction in rosewood using the original pins.

There has been a well-performed neckset and the guitar plays nicely with a very big sound. While a very different instrument from a period Martin or Gibson flat top, this Kay-made guitar is a fine example of the quality that the company was capable of when building for a client, not pinching every penny. A fine pre-war jumbo guitar, raw-boned perhaps, but capable of a very powerful sound all its own -- and complete with the rare fitted HSC. Excellent - Condition.
×