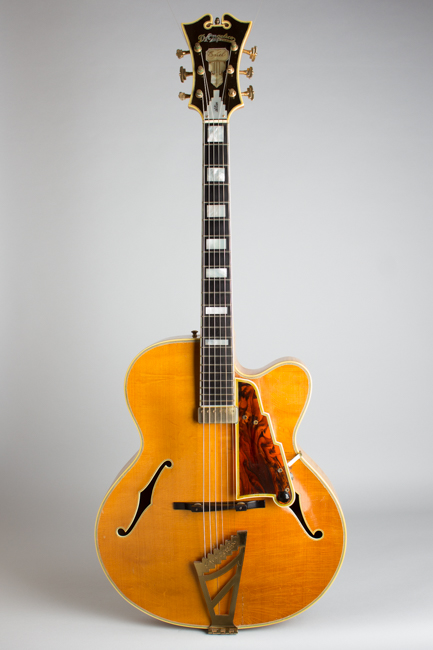 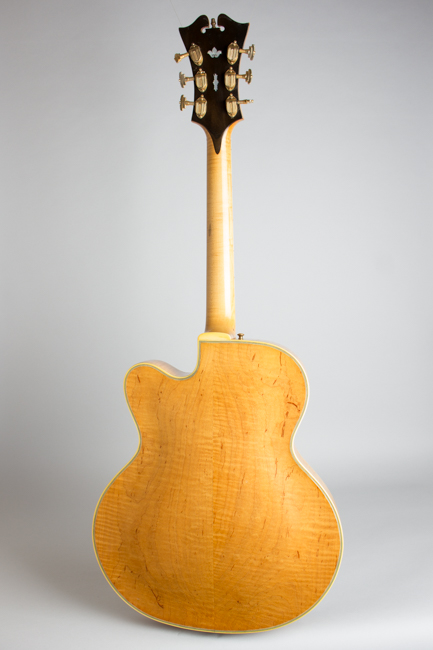 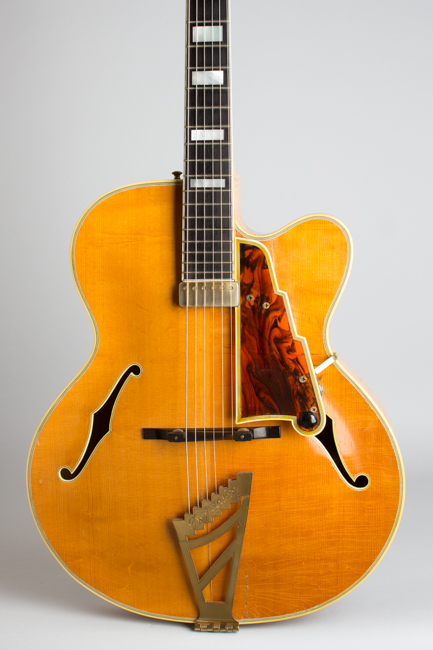 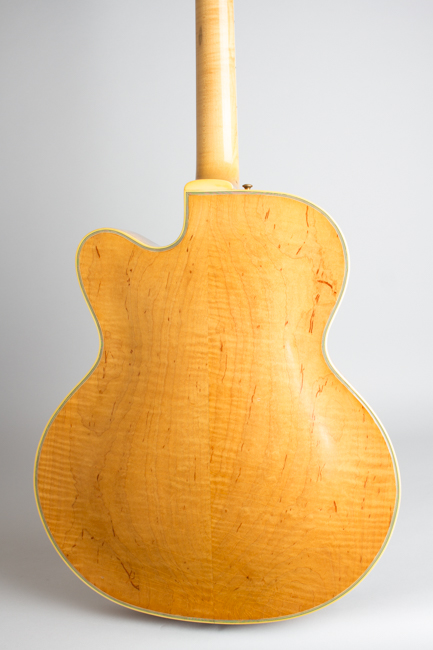 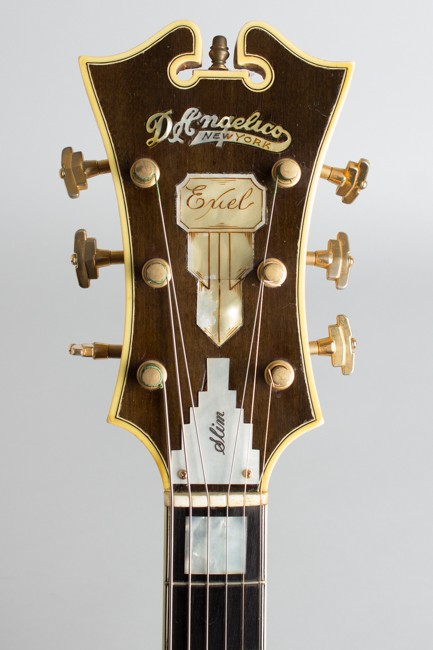 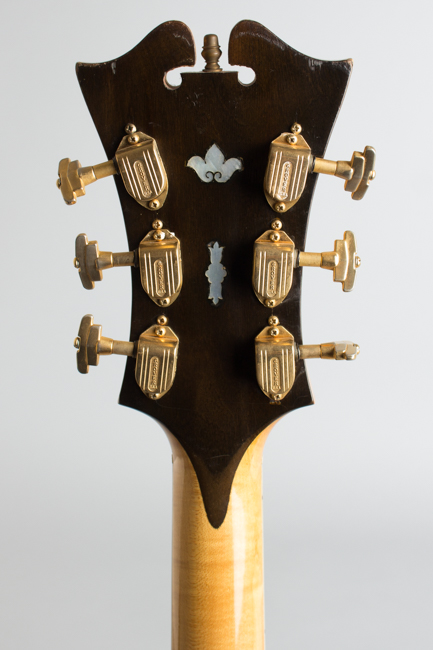 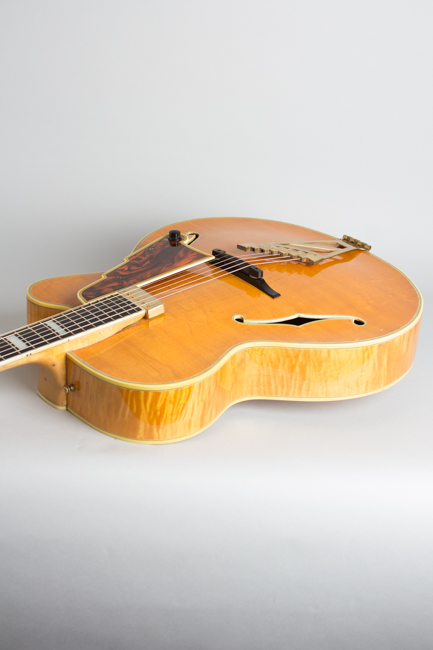 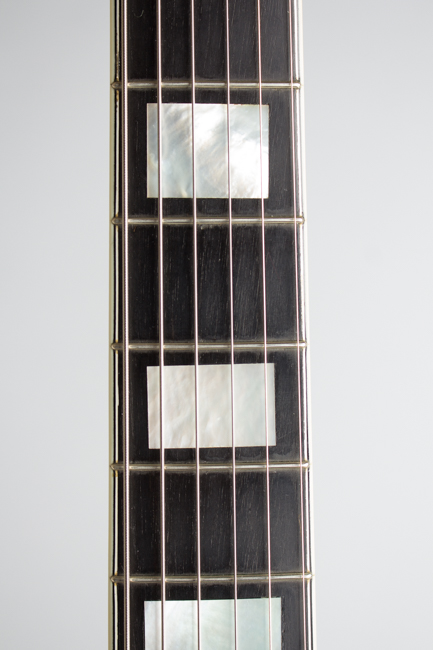 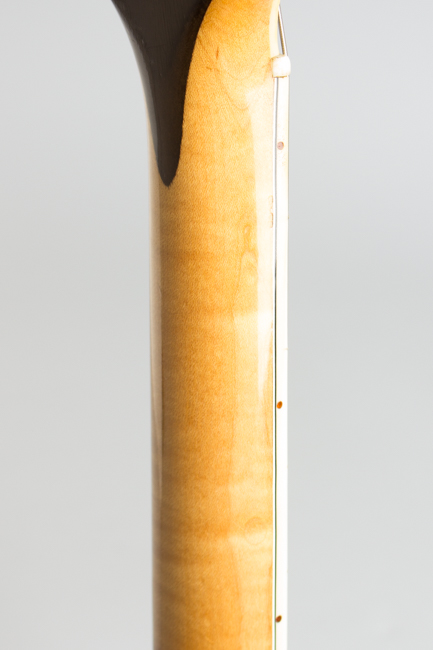 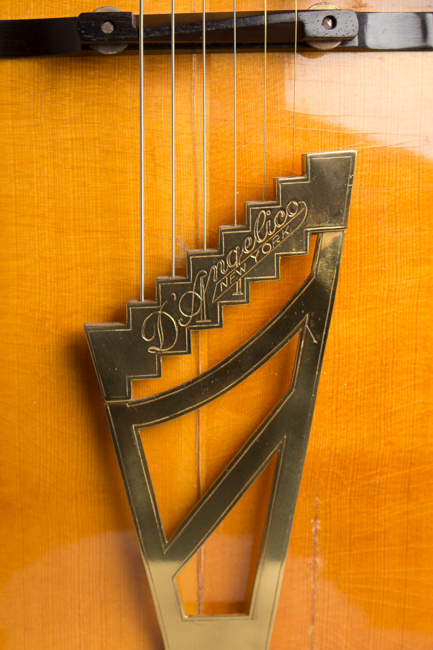 This beautiful blonde cutaway D'Angelico Excel is a wonderful example of this builder's best work, as well as a simply fantastic player's guitar. John D'Angelico built these instruments for the individual players of his time, but even so he really was building for the ages, each instrument standing as an individual creation that is not only a work of art, but can be the finest tool for musical creation one may imagine. This guitar "excels" when played both acoustically and amplified, demonstrating once again that the authentically legendary status held by this single builder is no fluke.

In 1958 the Excel was one of two basic styles offered by D'Angelico, with many custom variations possible. This 17" model was not the most elaborate or expensive D'Angelico guitar -- that distinction belongs to the 18" New Yorker. Still, right up through the 1960s many players preferred the slightly smaller and easier to handle 17" Excel, and even after it was technically no longer the flagship model, the Excel still made up a large part of D'Angelico's production. He had first made cutaway instruments in 1947 following Gibson's lead, and by the time this guitar was made, the rounded treble-side cutaway had become a more-or-less standard feature.

Each D'Angelico guitar was individually built to order, often reflecting the player's personal preferences, but all shared the same high standard of craftsmanship that characterizes these purely handmade instruments. This Excel is a cutaway arch-top guitar from the period that saw the final flowering of D'Angelico's talents, when he was widely considered the premier builder of carved top guitars in the world, really competing only with Gibson.

By this point the original Epiphone company was gone, the Strombergs were dead, and most other builders had abandoned the carved top guitar in favor of purpose-built electrics. Even Gibson built only small numbers of their L-5C and Super 400C guitars in this period, and to many professional players a D'Angelico was superior to anything else available.

At this juncture, John's clients primarily consisted of many of the best working guitarists, both well-known names in the jazz and session/broadcasting worlds as well as now-forgotten players who worked the more prosaic restaurant, wedding, and social "casual" gigs still common at the time. This guitar is noted in the D'Angelico ledgers as completed and sold on June 25, 1958, with the buyer's name noted in printed transcriptions as "Cangel," which may be an abbreviation or a misunderstood notation -- the late 1950s ledgers are written by hand in a sometimes semi-garbled script.

The features of this Excel are fairly typical for the period. The back and sides are made of beautiful curly maple, with a somewhat unusual dark-spotted figure to the back and strident flame on the sides. The X-braced top is carved from fine tight-grained spruce with a slight wave to the grain pattern towards the outer edges. The top and back are enclosed in 6-ply Celluloid binding inside a double wide outer layer, with a double side line. The f-holes are triple-bound. The body dimensions are a 17 1/4" lower bout width with a depth at the rim of just over 3". The carved ebony bridge and engraved, gold-plated Art Deco tailpiece are typical D'Angelico fittings of the period.

The one-piece maple neck has a 1 11/16" nut width and a 24 3/4" scale. The triple bound ebony fingerboard is ornamented with very neatly executed pearl block inlay in the typical Excel non-segmented block pattern. The neck has a fairly flat "C" profile and is very comfortable to play, with a wider profile than some. The headstock has the "D'Angelico New York" script inlay at the top, above the inlaid pearl block design engraved "Excel," and is crowned with the traditional finial at the peak. It has triple binding with a thick outer layer in the Excel pattern.

Tuners are the gold-plated Grover Imperials used on all of these guitars. There are pearl pieces inlaid into the back of the headstock, which is ebony veneered. The Truss rod cover may be a replacement; it is the traditional style (mimicking the stepped silhouette of the New Yorker hotel on 42nd Street), but is a bit smaller than expected and bears the name "Slim" in incised script.

This instrument has a fabulous acoustic tone but is currently optimized more for use as an electric guitar. The multi-bound celluloid pickguard is in the original style but of more recent vintage, and includes a built-in mounting for a Gibson "Johnny Smith" mini-humbucking pickup. The attachment bracket is screwed to the pickguard, not the guitar, and there is a small piece of damping material between the pickup and the top.

The single volume controls is mounted at the far tip of the pickguard, with the wires routed to the jack mounted just beneath; there is no jackhole in the guitar itself. The sound is smooth and superbly sweet, with the classic character of many period jazz recordings. A couple of similar Excels were made for Mundell Lowe within months of this guitar.

This beautiful guitar has survived 60 years of use with fairly light play wear, but does show some repairs that can mostly be traced to the effects of the original Celluloid pickguard disintegrating and outgassing some time ago. The lovely ambered blonde lacquer finish is original except in small areas where touch-up over the repairs has been affected. There is no heavy finish wear, and the guitar overall looks and plays excellent.

The instrument has a number of repaired top spruce grain cracks, which mostly appear to be the result of the drying effects of Celluloid off-gassing. The area under the pickguard is predictably the most affected, with two noticeable spliced cracks hidden under the repro guard and some residual staining to the wood. There is also a grain crack just along the bass side of the fingerboard extension. These are all sealed but visible, with some very topical finish touch-up.

The top seam has an old separation under the tailpiece running up to the bridge area that has been re-sealed and spliced, and another grain crack just under 3" long off the treble side; these are visible older repairs but completely stable. There is also a small grain crack to the maple side just below the tailpiece. There is no wholesale overspray to the top, as one might often expect with these older repairs.

There are a small dings to the finish overall and moderate checking to the lacquer mostly across the top. The bass side of the heel shows some noticeable finish patching, and the heel and possibly the back of the neck up to the headstock base have been re-lacquered at a slightly later time. There have been three different strap button locations in the neck heel area; on the centerline about midway up, on the bass side closer to the fingerboard and currently on the side into the top edge of the internal heel block. There are several filled screwholes on the side of the fingerboard extension from different pickup installations over the years.

The multiple binding on this guitar show no celluloid distress at all, not even much shrinkage. Except as noted above the hardware is original, including the Grover Imperial tuners, engraved tailpiece, and carved ebony bridge. The guitar has been refretted with fairly slim wire and plays effortlessly. Despite the catalog of repairs above, this guitar presents very well, plays beautifully, and sounds truly spectacular in both acoustic and amplified modes. All of John D'Angelico's instruments are special; this one is a splendid example of how the later models perform, particularly in the amplified mode. Includes the original Ess & Ess hard case (made in Brooklyn), the guitar has apparently spent much of its working life in "Joisey" and exudes a vintage East Coast mojo. Excellent - Condition.
×