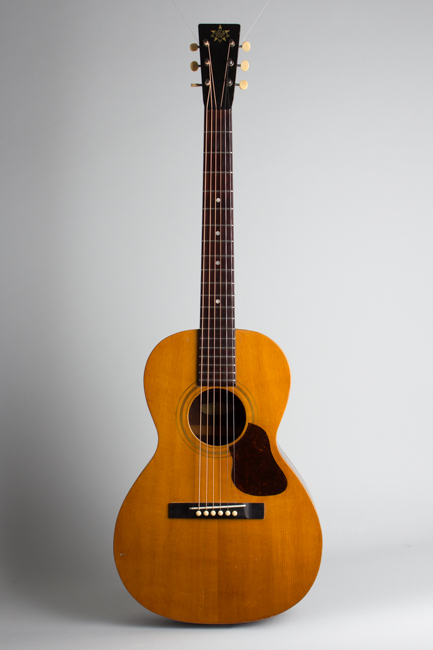 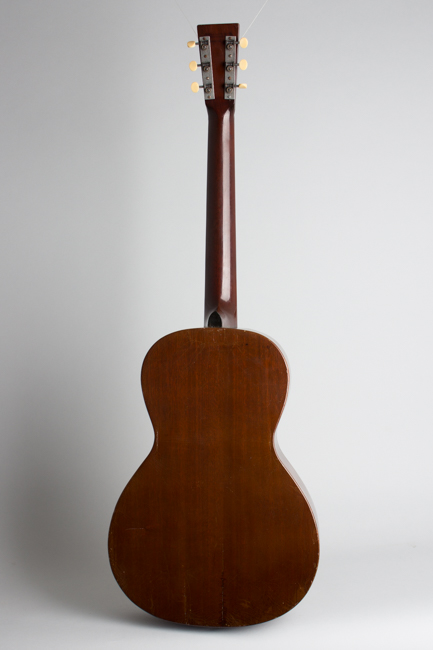 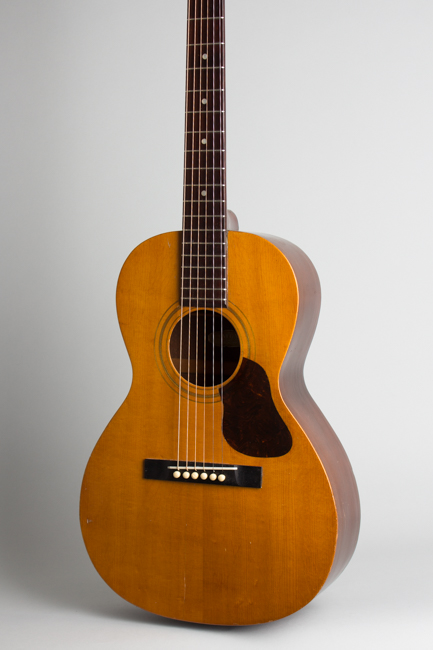 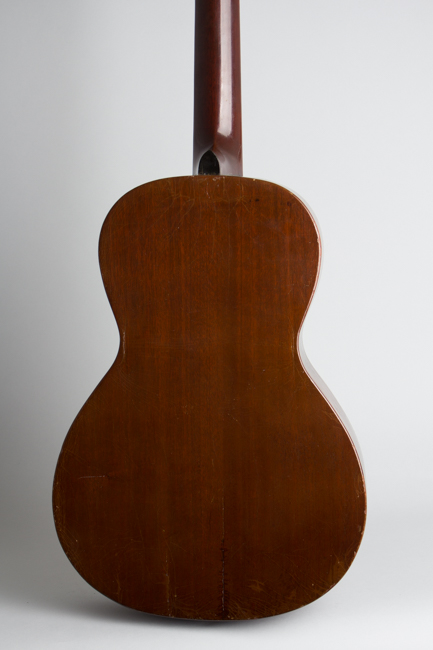 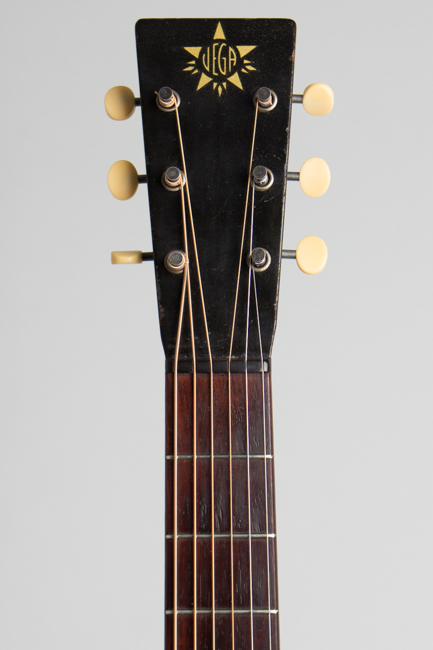 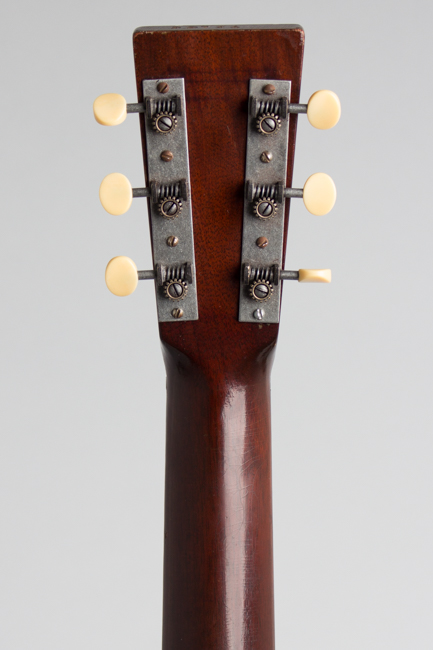 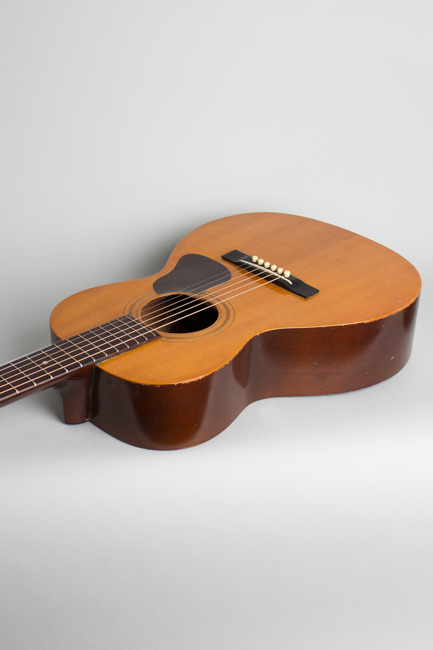 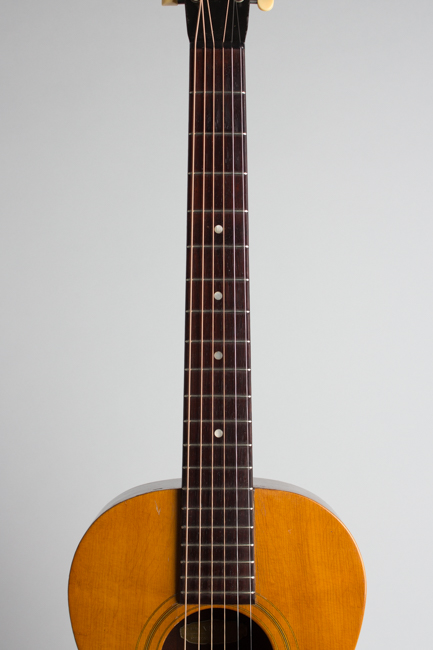 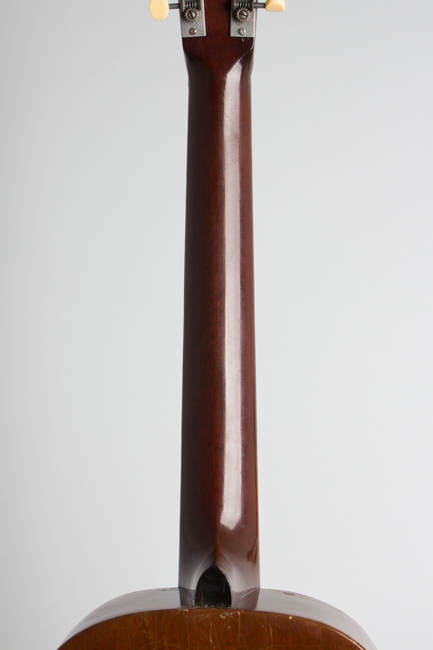 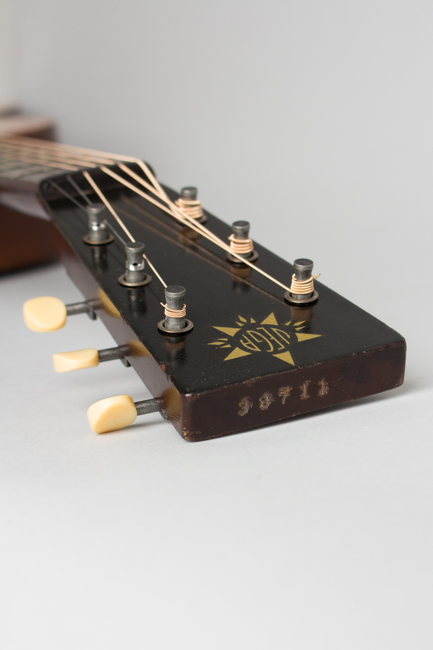 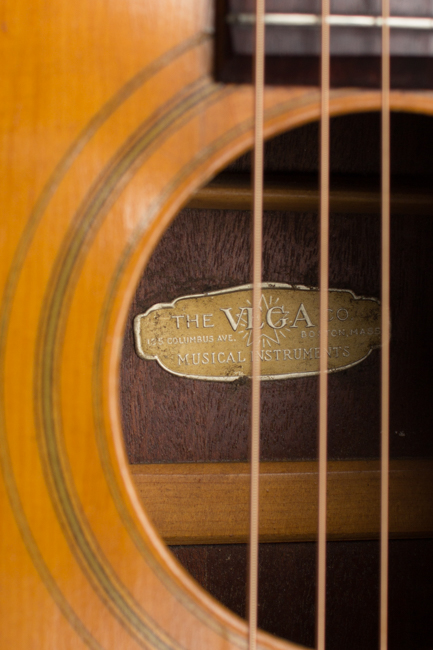 This plain but elegant little Vega flat top is the pre-WWII Model 04, saddled with one of the most unexciting instrument names ever! In the late 1930's this was the least expensive guitar the Boston-based company built. While Vega built guitars for at least 75 years, we do not see that many examples of the company's guitar output, at least compared to their banjos.

The Style 04 is a 13 1/2" wide mahogany and spruce flattop, ladder braced with 14 fret neck joint. It was priced in this "Concert size" at $30 in 1939, exactly $10 less than a Martin 0-18 but still not a cheap instrument for the time. There is very little ornament, just a Vega star logo on the headstock, inlaid pickguard and a wooden soundhole rosette. The body edges are not bound or purfled. There is a neat little gold embossed Vega label in the soundhole

Internally the bracing is simple, in the "ladder" style typical of many 19th and early 20th century guitars. There are transverse bars under the fingerboard, behind the soundhole and a ways back from the very thin flat bridgeplate. This is similar but more finely crafted than the familiar "Stella" style construction and makes for a punchy and lively sounding guitar. The scale is a bit longer than Martin's at 25" giving some extra muscle to the sound. Even this very basic instrument is very neatly made of good-grade woods in the Vega tradition, with a high level of craftsmanship. The neck has a slim and comfortable profile with just a hint of a rounded "V" spine.

This is how Vega's 1939 catalog described the model: "Here is a new moderately priced Vega guitar which compares very favorably in tone, workmanship and appearance with much higher priced instruments. Selected mahogany body and spruce top with black and white inlaid ring around sound hole. The neck is mahogany with blackwood fingerboard and genuine ebony bridge. The body top and back are polished finish. Neck joins the body at the 14th fret, shaded top on request."

The instrument shown in the catalog illustration has a slotted peghead and elevated pickguard, this one has a solid head but the celluloid pickguard is inlaid into the top. It also has a genuine rosewood fingerboard not the "blackwood" (dyed maple) specified. Vega's guitar serial numbers have not been accurately documented but this guitar appears to date to around 1938. All of these Vega "standard" flat tops were discontinued in October 1941; some returned after the war but many including this style were not revived. This is a fine sounding solid wood pre-war concert guitar, an excellent player with a sound somewhere between a Schmidt-made Stella and a Martin 0-18.

This pre-war Vega is decently well preserved with some light wear overall and appears all original except for replaced tuners. There are some old repairs but the instrument is solid and very playable. The finish remains original with some checking, dings dents and scrapes but no major areas of wear. There are repaired spruce grain cracks on the top off the upper edge of the pickguard and behind the bridge, from the A string area to the back edge. The back has a couple of longer mahogany grain cracks coming off the back rim and a very short one right by each waist. All are solidly sealed with minimal touch-up

The neck has been reset, which is a difficult procedure on many Vega guitars due to the cello-like mortise & tenon heel joint they are built with. This one has been done very solidly but there are a number of cosmetic scars on the rim and back finish from the neck removal procedure; there are no cracks however. The instrument is now an excellent player with the original uncut bridge; the unslotted bridge pins appear original as well.

The tuners have been replaced with modern vintage-style strips which look the part perfectly; we are actually not sure what this model was originally equipped with built they would have been pretty basic. The original frets remain in very good shape and playability is excellent. Overall this is a very nice specimen of a rarely seen 1930's Vega flattop, a cool prewar instrument that many modern players never encounter. Very Good + Condition.
×