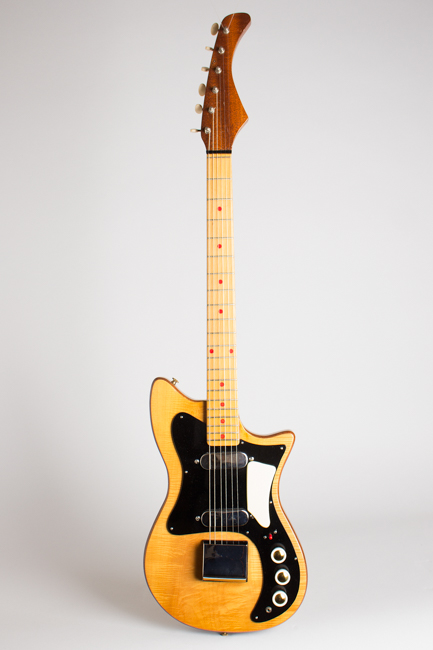 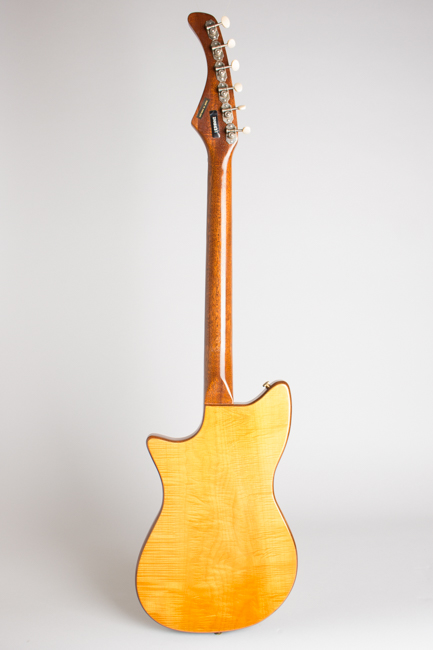 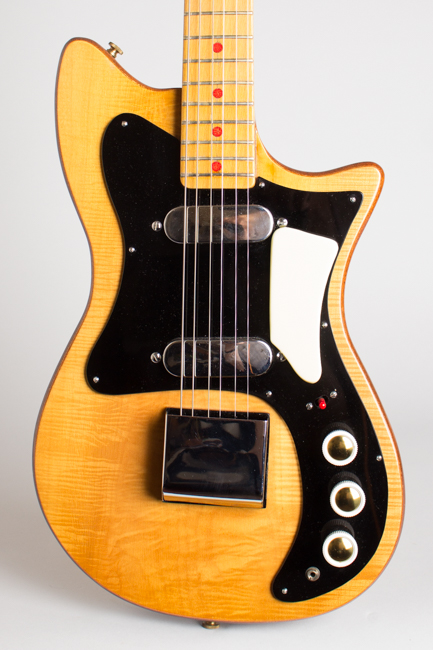 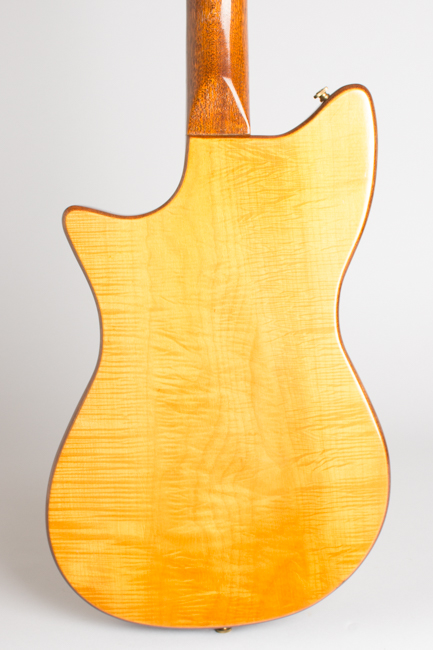 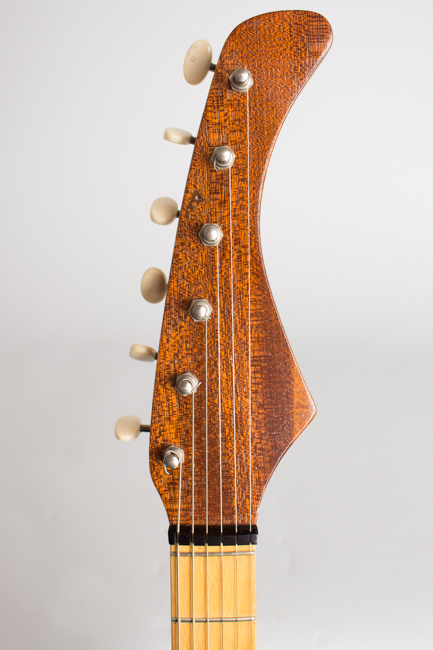 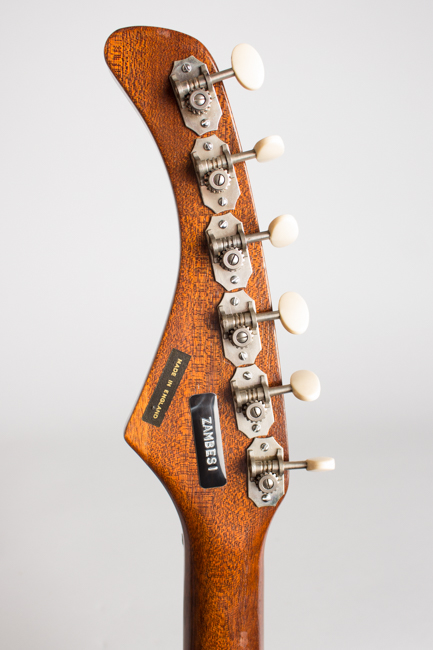 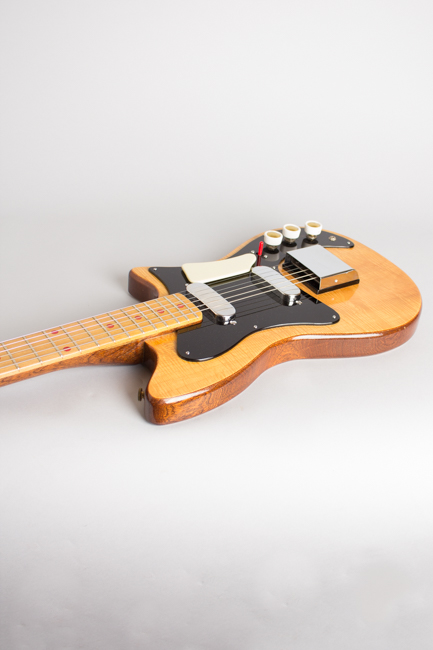 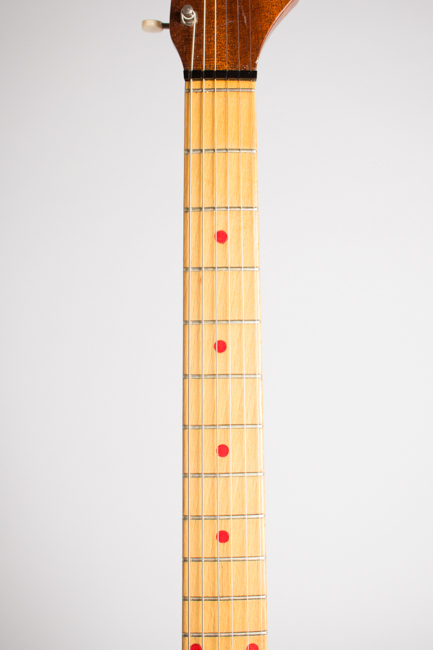 When the "Beat Boom" began in the UK in the late 1950s, the electric guitar industry in that country was practically non-existent. With the much-coveted American guitars mostly unavailable and European or Japanese imports the only alternative, a few hardy souls began to build solid bodies themselves in a sort of modern cottage industry. In 1959 Jim Burns and Henry Weill were early pioneers in this effort, but their partnership and their brand-Burns/Weil- was very short lived. Weill-who designed the pickups and electronics-called his subsequent line "Fenton Weill" and continued production for several years thereafter.

This guitar was built by Weill's company, but sold under yet another brand-Hohner London, a wholesale UK-based division of the company primarily known for Harmonicas. The model was called the "Zambesi" (for reasons lost to history!) and is certainly a uniquely striking looking solidbody. With a long scimitar-like headstock and slim double cutaway body, it has quite a rakish air. The face and back are veneered in sycamore with a nicely flamed grain, and the fittings are basic but functional. The construction is solid if not to quite the same standard as Burns or Grimshaw instruments, but certainly better than most other English guitars of the period.

How this guitar got to the US is a mystery…it was bought as "new" in the 1970's in a famously eccentric guitar store in Arizona renowned for such offbeat finds, and then put away untouched until fairly recently. The back of the headstock is marked "ZAMBESI" in Dyno tape lettering and there is a "Made in England" sticker usually seen only on exported instruments. The name "HOHNER" was originally written on the pickguard, but has been carefully and neatly removed-the faintest shadow is visible under direct light. The US-made case is period and appears built for the guitar; we can only assume some venturesome American company imported a few of these in hopes of catching some cheap guitar-boom action in the early 1960's. This very rare guitar-even in England, but exponentially more so here- has survived in nearly perfect condition since and we can't imagine there are many more out there like this!

This is as clean and original an example of this super rare guitar as we can imagine seeing. It shows very little wear at all, and appears to have hardly ever been played or even handled much since 1962. The bridge cover has some slight distortion to the top where it looks like the flimsy metal piece was pressed down over the raised saddle screws, and there are a few TINY dings and chips to the finish. The rearmost knob has a small dent in the metal cap.

These instruments were never renowned for playability, but by its own standards this is a functional guitar. We straightened the neck and did some leveling to the notoriously poorly set English furniture-shop frets, resulting in it now playing better than it likely ever did when new in 1962. Overall this is an amazing find for the connoisseur of the weird and wonderful, especially in the US. One of the oddest-looking but best sounding of early UK-made guitars, in nearly pristine condition. Comes complete in a US-made Jobber case that appears perfectly fitted to the guitar, also in extremely fine condition. Excellent + Condition.
×