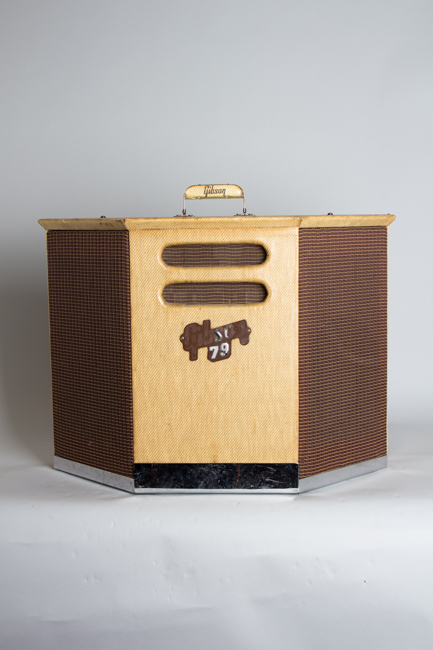 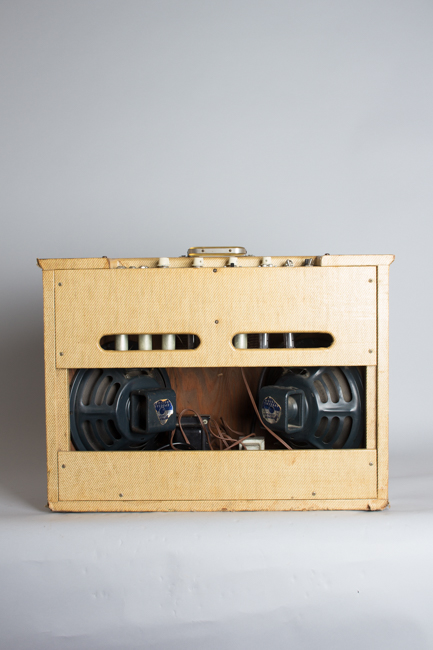 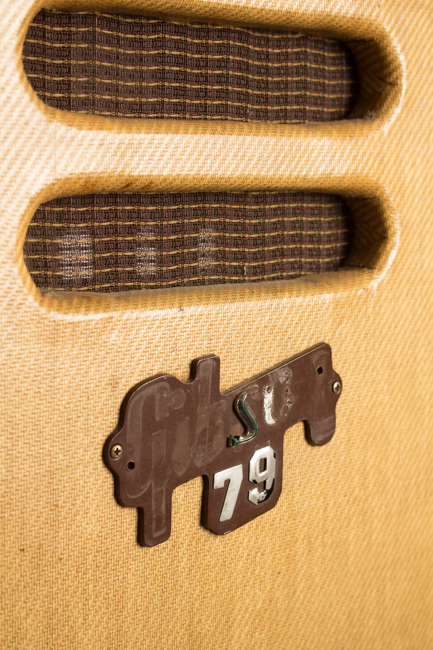 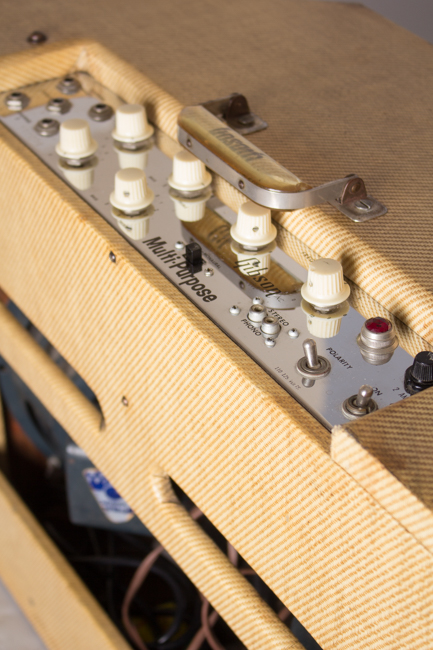 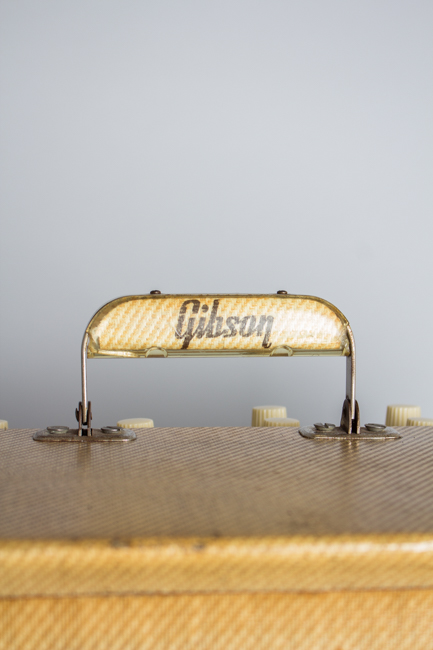 While Gibson has produced many interesting amplifiers over the years, the GA-79 is one of the most unique and most sought after. Introduced to complement the company's new stereo guitars, the GA-79 was the world's most advanced stereo instrument amplifier at the time. Indeed, Gibson even encouraged customers to use it as a home stereo amp at the time!

The legend "Multi-Purpose" is printed on the control plate to attest to that, above an input labeled "stereo-phono". This is a very early example; the model was first catalogued in 1961, but this one is of a very limited number shipped out in 1960. Later examples were designated GA-79RVT with added reverb, but this original style GA-79T has only a tremolo effect.

This unusual wedge-shaped stereo amplifier was originally meant as an adjunct to Gibson's new stereo guitars, the ES-345 and ES-355. After all, if you're going to spring for a guitar with a stereo output, it only makes sense to have an amp to exploit that feature! Not wanting to limit sales of this new baby, Gibson also made the amp fully functional with any standard "mono" electric guitar.

The GA-79T basically consists of "two amps in one" to produce a true stereo output, rather than a design that produces a stereo-esque effect like Magnatone's 260 and 280. The unit features two independent preamp channels with their own volume and tone controls plus a single tremolo rate and depth. Each channel has two inputs, with a single stereo jack in the middle. There is a "stereo-mono" selector on the control panel and a hard-wired outboard trem pedal provided.

The most visually striking feature is the unusual wedge-shaped tweed-covered cabinet, soon enough copied in England as the Watkins "Dominator". This mounts two Jensen P10Q speakers at an angle of approximately 45 degrees to each other which accentuates the stereo character, but creates a bit of a sonic dead spot in the front-center of the amp until you get quite a distance away from it. The design creates typically Gibson-esque smooth, round, clean tones up to medium volumes, but slides into sweetly textured crunch when pushed.

This tweed-sheathed beauty is a lovely example of the first GA-79T, the earliest of this iconic amp we have seen (the speakers are dated to the 33rd and 34th week of 1960) with a lot of differences from the more common 1961-2 era examples. A classic example of the best in Kalamazoo electronic engineering, and a great studio or stage amp.

This is a nicely original amp, with just an added 3-prong cord and some newer tubes. The original Gibson-branded tubes are included but are a bit noisy so we replaced them, but they are still working and could be remounted as desired. There is some external wear overall, with dirt and staining to the lacquered tweed covering and fraying at the edges. The control panel is still shiny and the graphics are nicely intact.

Internally this amp is only lightly serviced, with no notable alterations. The original Jensen speakers still sound great, and the often removed trem pedal is still present. Unfortunately most of the fragile plastic "Gibson" logo is missing from the amp's face; the mounting plate is still intact with the "79" in metal letters.

The four screws securing the handle are replacements; the cream plastic control knobs are a matched period set but are not a style usually associated with Gibson, so we cannot absolutely verify them as original. At some point (in the disco era?) an owner mounted fairly heavy mirrored metal plates to the top and bottom; existing screws were used but no extra holes drilled. We removed the top one for the sake of original appearance; we left the bottom in place as it provides a useful kick-guard to the base, but either can be installed or removed in a few minutes without otherwise altering the amp.

This is a fantastic sounding amp, useful in all sorts of ways; clean at first, it builds into a powerful roar when pushed. We might even try spinning some records through it! A true Gibson classic, and one of the coolest oddball amps of all time. Excellent - Condition.
×