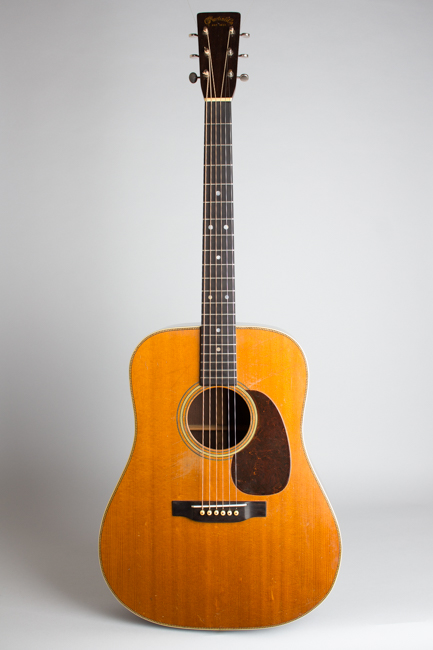 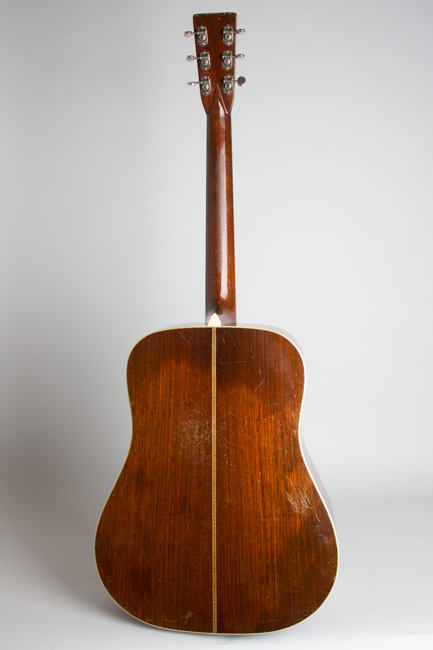 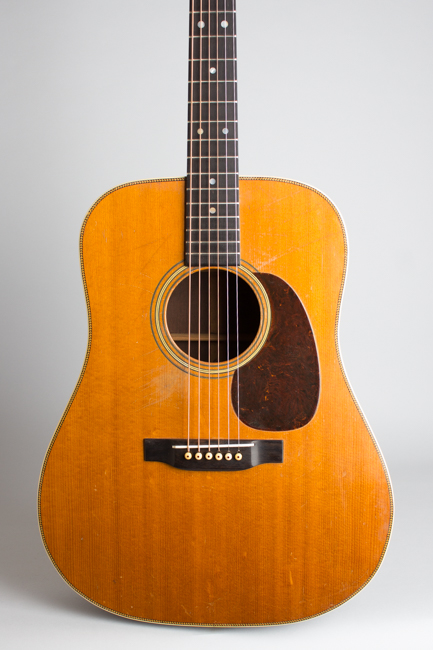 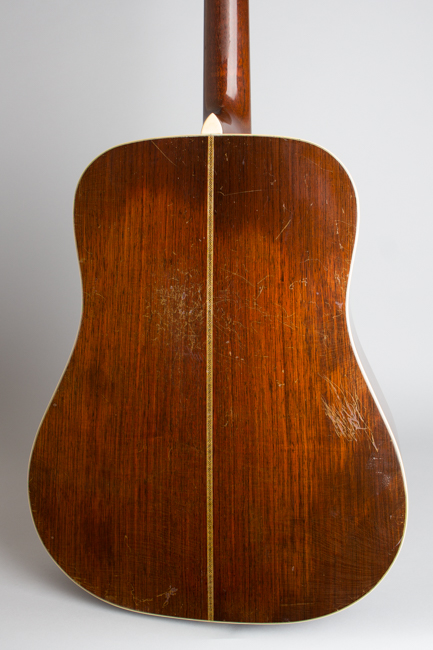 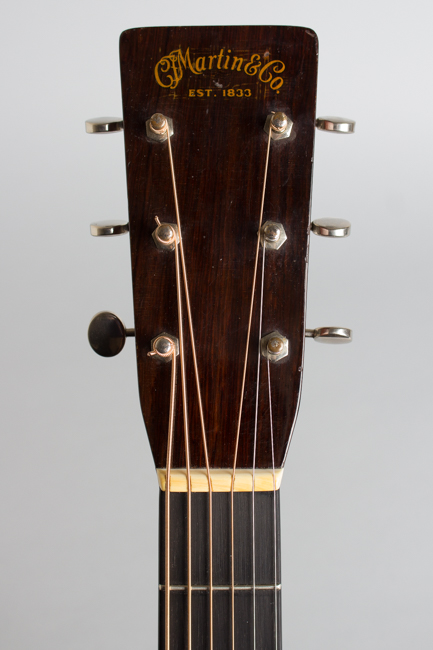 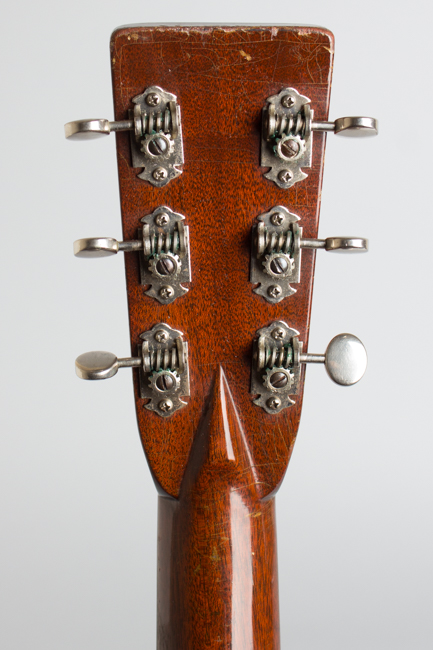 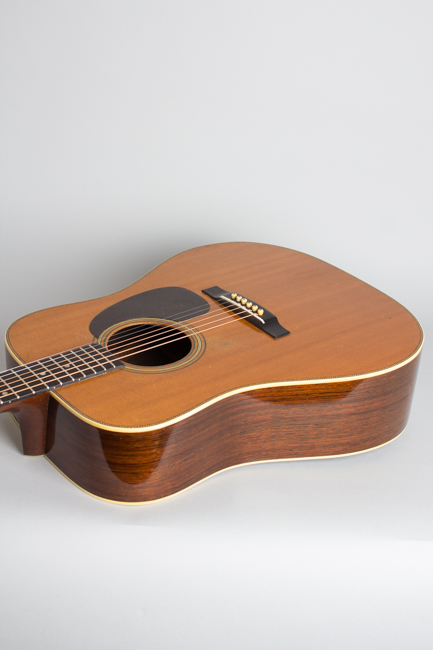 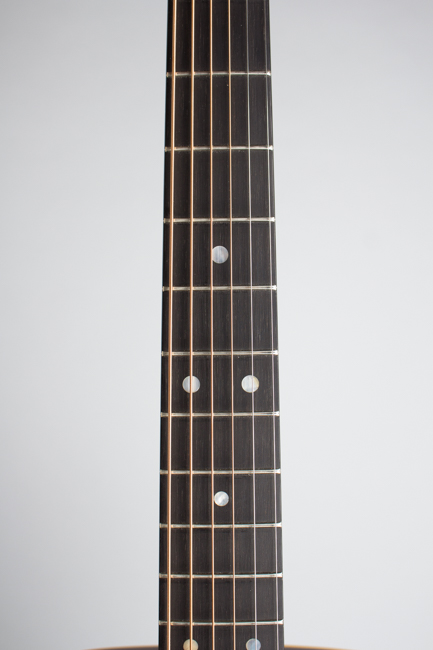 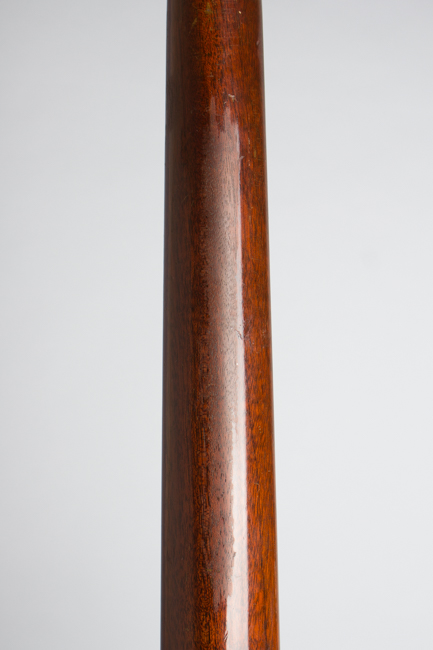 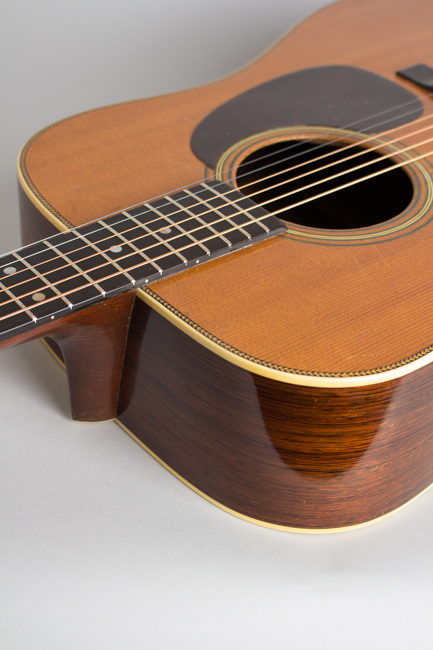 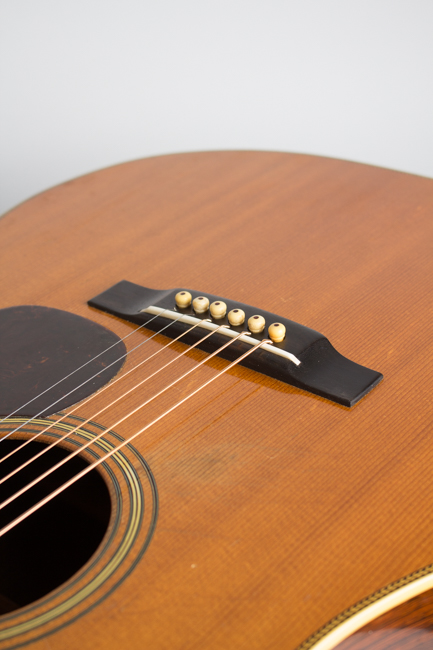 
Among guitar connoisseurs, the word "Herringbone" has a special meaning. It refers not just to a specific type of wood top trim used by C.F. Martin, but to one guitar in particular -- the 1934 - 1947 D-28 Dreadnought, one of the most revered of all classic American guitars. Bluegrass players will play virtually no other instrument than a D-28 of close copy, and the model is one of the mainstays of virtually any acoustic flat-picking or rhythm stylist.

This is a relatively late example of a "bone" from mid-1946, built just as the nation (and the guitar market) was gearing up for a post-war boom period. Despite competitive efforts from Gibson, Martin's D-28 Dreadnought was widely considered unquestionably the best large-body flat-top available when new and remains a superlative instrument for both wholly acoustic folk or bluegrass and the emerging and honky tonk style with electric instruments in the mix.

Martin's instruments changed quite a bit in this period and 1946 was a transitional year; this D-28 has the classic period appointments. It features beautiful Brazilian rosewood back and sides with a nice, even, straight grain pattern with some typical darkening from the wood's oils leaching into the finish on the upper quarters. In organized Teutonic fashion, Martin preferred very straight-grained woods in the 1940s; the modern fascination with dynamic figuring would have been dismissed at the time as frivolous at the Nazareth factory.

The tight and very even-grained spruce top on this guitar also shows Martin's dedication to the finest and most consistent of tone woods; by the end of WWII, spruce was in very short supply, yet the company's best guitars still feature exquisite tops. The Sitka spruce used on this guitar was sourced from Alaska; the supply of Appalachian spruce used previously had been decimated by the wartime needs of the aircraft industry and was no longer available in the quantities required.

In the middle of 1944 Martin's craftsmen stopped using the original scalloped X-brace pattern on these instruments, reportedly due to the failure rate of tops in the field with the heavy gauge strings common at the time. This 1946 guitar is still built and braced more lightly than examples from a few years later on. The earlier delicate small pearl diamond-shaped fingerboard inlays had also recently been changed to larger pearl dots, and these instantly identify the guitars of this particular period. The herringbone wood trim is bordered by a layer of ivory celluloid among the top, and the back is triple-bound with a chain pattern backstrip. Other typical features include the long-saddle ebony bridge, tortoise pattern Celluloid pickguard, and pre-war style openback Waverly tuners.

Within less than a year of this guitar being built, the use of the lovely herringbone wood trim came to an end; it had been sourced from Germany, and when the company's supply was used up, there was simply no more to be had. The D-28 stood at the top of the post-war Martin line, but the top was simply bound in celluloid. The "bones" of this just post-war period are superlative guitars, and while often not quite as responsive as their scallop-braced predecessors, they have a huge and sometimes slightly more focused tone. This splendid example is a joy to play, and excels at practically any style of picking one cares to attempt!

This is a very fine playing and sounding D-28, with plenty of volume and a somewhat brighter, more penetrating sound than some from this period without losing the depth these are famous for. It has recently been refurbished with a neck reset and refret, but remains all original apart from this.

The original lacquer finish has no overspray or touch-up and shows its age with some typical checking, small dings, surface scratches, and compression marks. There is some pickwear on both sides of the sound hole, with one fairly concentrated spot above the upper back edge of the sound hole that goes through the finish. There are some fairly deep scratches on the back and the finish is worn off the spine of the neck.

Amazingly there are no cracks anywhere, and this guitar, though well-played, must also have been well-cared for. Old D-28s from this period are real workhorse guitars; they were rarely coddled and often show the signs of very heavy use. This guitar wears its scars proudly, and remains not only a great piece of 20th century guitar history and artistry but an exceptionally fine player's instrument. It arrived with a somewhat worn period 16" hard shell case not specific to Martin, but one that appears to have been with the guitar since new. Excellent - Condition. Excellent - Condition.
×