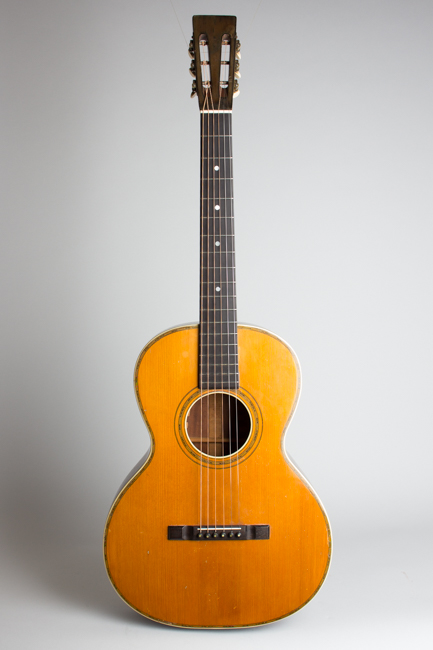 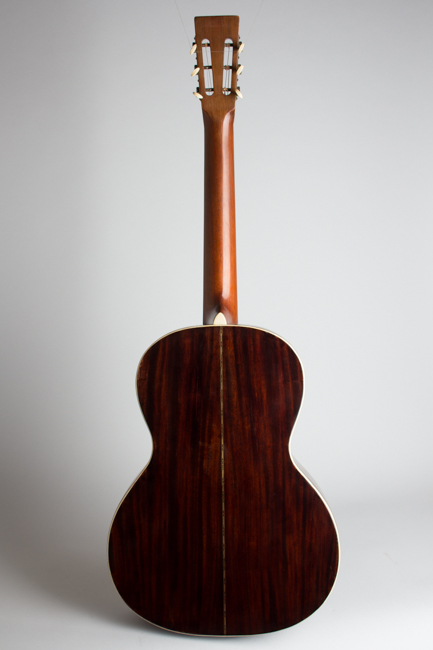 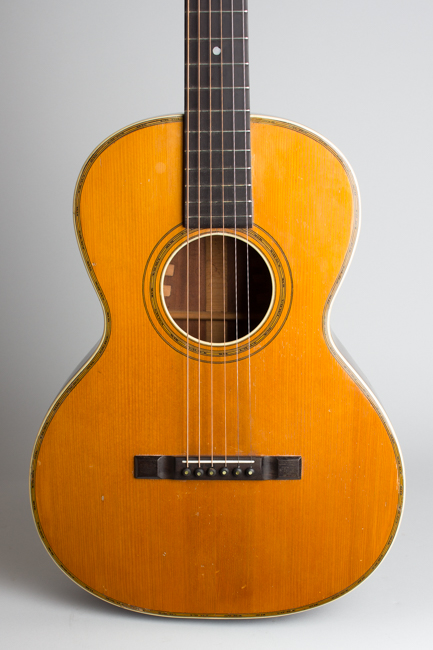 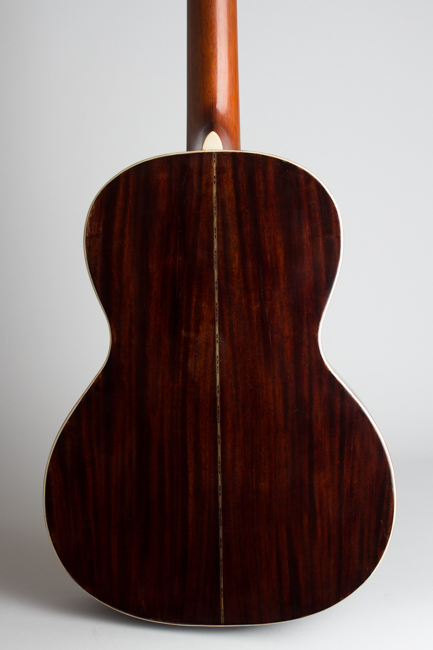 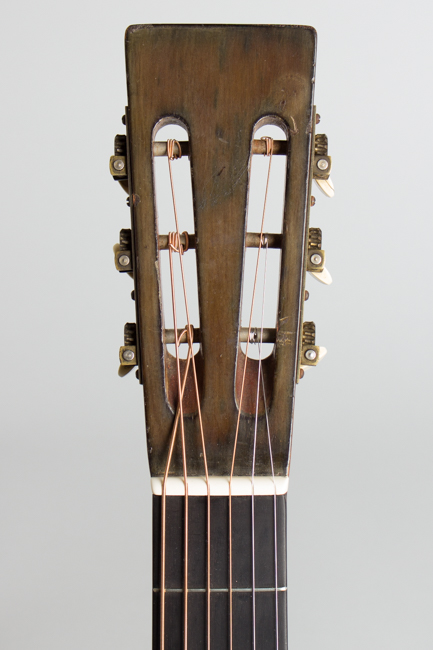 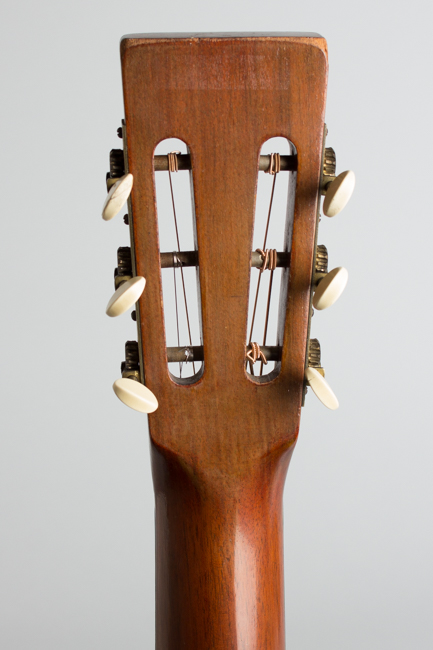 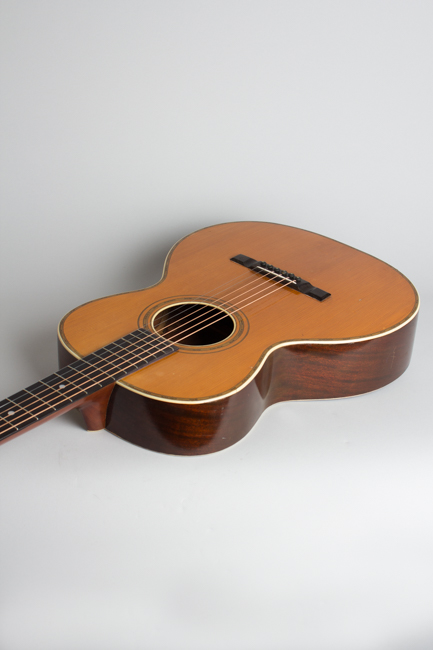 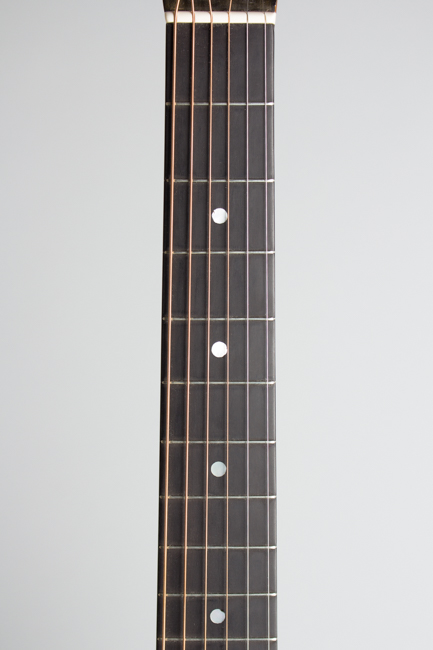 This guitar is a most interesting example of the Larson Brothers' 1920s work, and from a period when they were in the leading edge of building some of the finest steel-string flat-tops ever made. This guitar is 12-fret instrument of traditional design, 14 1/2" wide at the lower bout with a long 25 1/2" scale neck, making it fairly large for the time. It carries no brand name or stamp, but its design and build characteristics mark it unmistakably as Carl and August Larson's work. This is cosmetically a lower-grade guitar, but still built with very high quality materials and to the same standards as the Larson's fancier products.

Instead of the Brothers' patented laminated X-bracing, this instrument features a simpler canted straight brace design particular to Chicago makers sometimes now referred to as "Z bracing". The top has a single slanted brace and several straight braces, making for a very light and extremely responsive instrument. Despite this delicacy of construction, the top is solid with no distortion, just the brothers' trademark "built under tension" arching. This is a fairly large guitar to use this system, but was certainly designed as a steel-string instrument. It was likely built for a player on a budget and would have been considerably less expensive originally than a rosewood, pearl-inlaid Larson.

The features represent the lower end of the "middle-of-the-line" grade of build for the Larsons; professional quality but simply not as fancy as their deluxe products. The top, back, and sound hole edge are neatly bound in grained ivoroid and there is colored wood marquetry around the top edge and sound hole. The unbound ebony fingerboard has plain pearl dot inlay, with no decoration on the headstock or bridge.

The back and sides are solid mahogany, but finished in a "faux" rosewood grain that was a specialty of August Larson's, though it is more often seen on maple-bodied mandolins. The mahogany neck has a fairly slim profile with just a hint of a "V" spine, not as round-backed as many Larson necks.

The tuners are the original plain brass Waverly strips with composition buttons, mounted in the original 1910s "upside down" gear-up position. The guitar bears no serial number or logo stamp; it was likely a private customer order and may well have been bought in person from the brothers themselves. It is impossible to date exactly but the style of tuner and general features suggest the mid/late 1920s. This is an absolutely lovely guitar that has survived in finer and far more original condition than many.

This guitar remains in very fine condition for its age. There is light wear overall, mostly small dings and dents to the finish and none of the heavy playwear often found on flat-tops of this vintage. The back has had a number of grain cracks repaired, and this area only has a French polish application over the original lacquer. There is a hairline crack to the side just along the top edge of the tailblock that is solid. The remainder of the guitar remains in surprisingly original condition, with only the alterations needed to make it playable.

The neck has been reset; the angle is perfect, but we do see a bit of blushing around the edges and a very small sliver of wood missing on the side/back joint just above the heel. It has also been refretted, with very small (by modern standards) period-style wire. The bridge (and even the wooden bridgepins) is all original, appearing to have been reglued at some point. There is a small rosewood patch added to the underside of the bridgeplate, no doubt due to wear to the holes from string ball ends.

This is a most unusual great-sounding and playing guitar, with a combination of features not often encountered. The Larsons' artistry shows through in the quality of materials and construction, even though this was not an expensive guitar. The design, with its unusual bracing pattern (almost never seen on instruments later than WWII) combines some of the sharp attack of the prewar Stellas with the mellower sustain and sparkle of the typical Larson. A real gem of a medium-sized prewar flat-top; superbly responsive and with a unique character. Excellent - Condition.
×