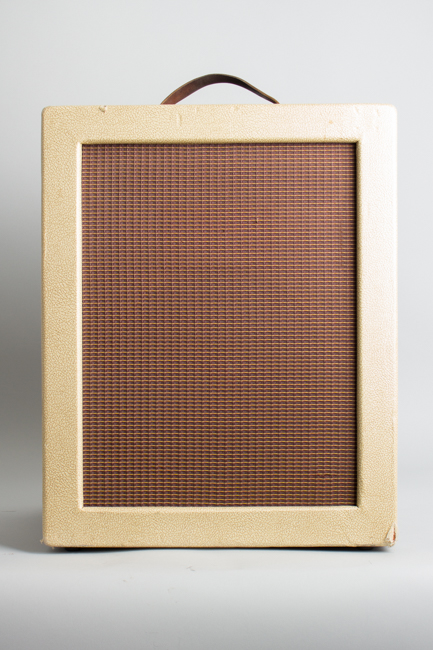 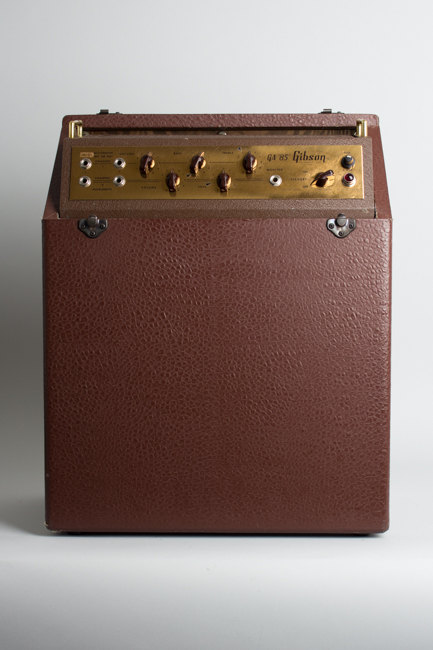 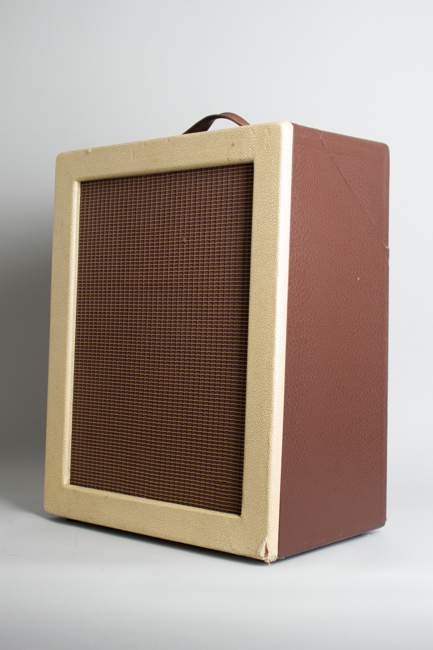 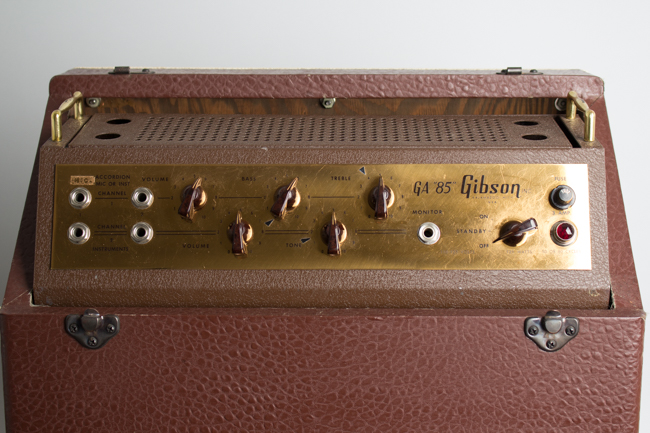 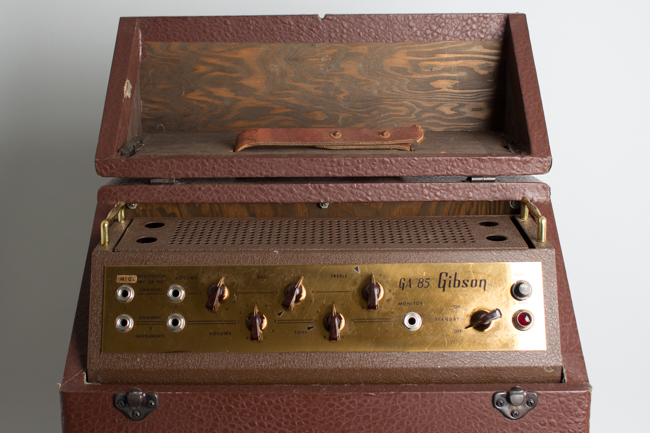 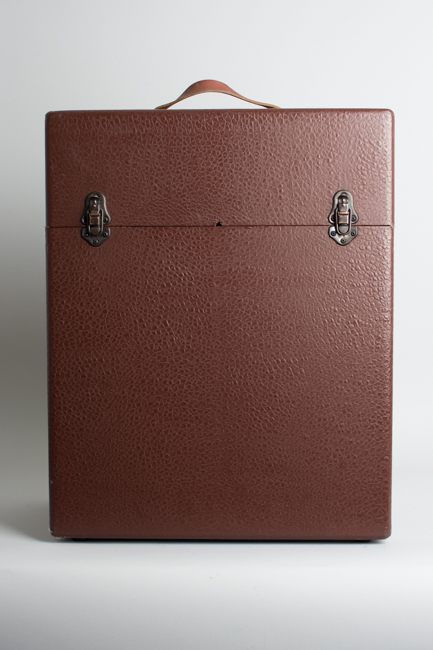 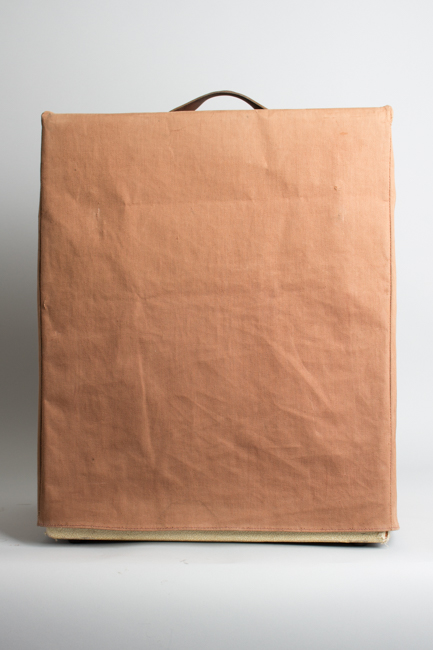 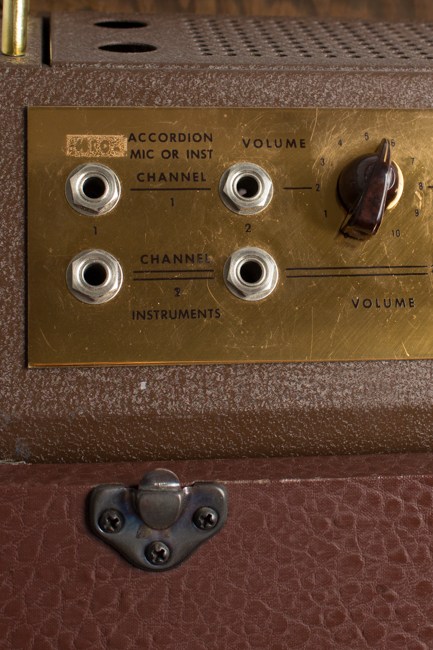 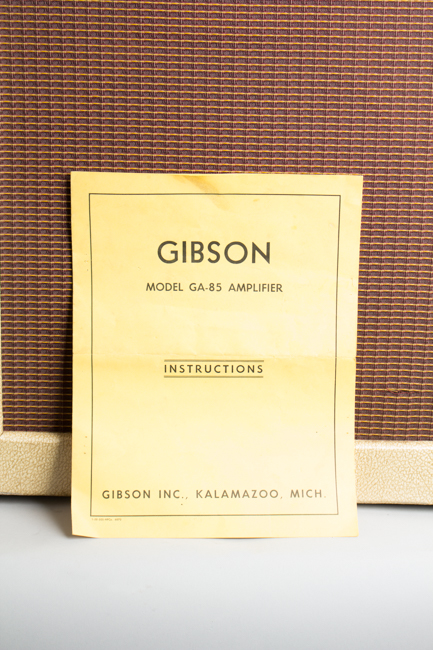 The GA-85 is one of the Gibson company's more interesting late-1950s amplifiers, with an unusual 2-stage construction that even at the time seemed rather old fashioned! The amp is a direct descendant (some might say a rehash) of the 1940-41 EH-185, which had the same basic idea -- a drop-in chassis with a separate speaker cabinet.

There is some likelihood that the amplifier unit itself is a product of Thordarson Electric Manufacturing Company, one of Gibson's long-time sub-contract suppliers. This separate head fits neatly into the speaker cabinet for carrying, and is removed for playing. The remote cabinet can be set up with the lid open or closed to alter the sound a bit.

The GA-85 is a 2-channel amp putting out about 25 watts total. The spiffy gold faceplate mounts the controls for Channel 1 (volume, bass, and treble) and Channel 2 (volume and a single tone control). The design aim was a clean H-Fi sound, and this amp is not the out-of-control overdrive monster many smaller 1950s combos become when pushed over "5", but has a clean, punchy sound that gets attractively wooly when pushed. It also has the unusual (for the time) feature of a headphone/monitor jack, which did not become common for decades.

The internal components we can see carry date codes from 1957; this model was only available from '57-'58, so that's pretty academic anyway! The GA-85 was designed as an easily portable but fairly powerful professional recording/gigging amp and still makes for a nicely compact unit with an interesting take on the traditional warm, jazzy Gibson tone.

This amp remains overall in very fine original condition, with just light external wear overall. The original cabinet handle has been replaced with a stout piece of leather and the molded plastic "Gibson" logo is missing from the grill cloth, but there are no other major alterations. Internally it appears completely original down to the tubes, and still has the original heavy-duty power cord with the old-fashioned ground clip, from before 3-prong plugs were common.

The grill cloth is very clean and the cabinet Tolex has only some small damage spots near the bottom. The metalwork and faceplate on the pull-out amp unit are nice and shiny, with none of the commonly seen moisture damage we often encounter on old amps these days. There were a few very small stickers added to the faceplate indicating a previous user's preferred settings, that could be removed if desired. This well-cared-for amp includes the original instruction/tech sheet/schematic that is a very rare find in itself. A lovely package of Gibson history that sounds great too! Excellent Condition.
×