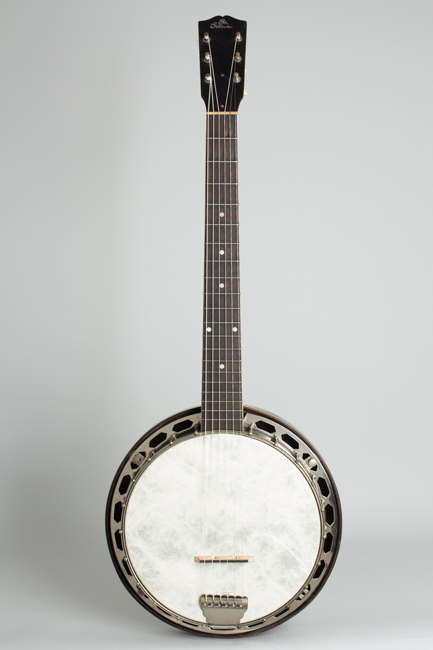 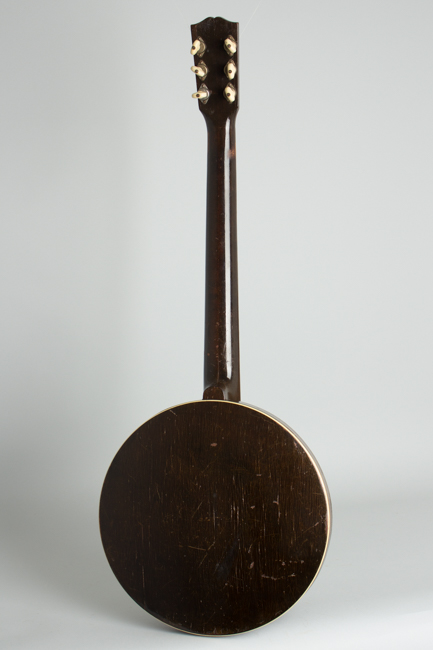 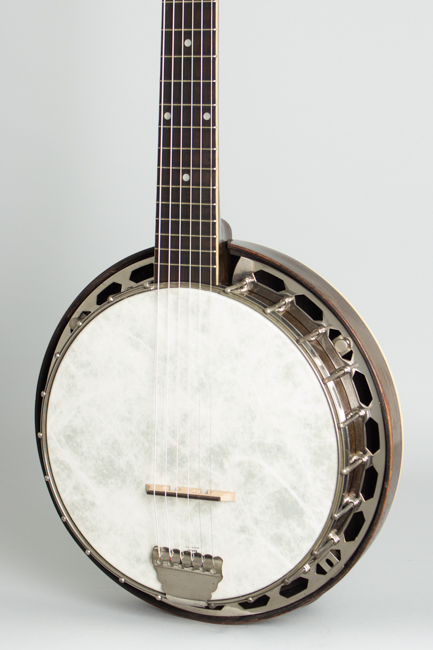 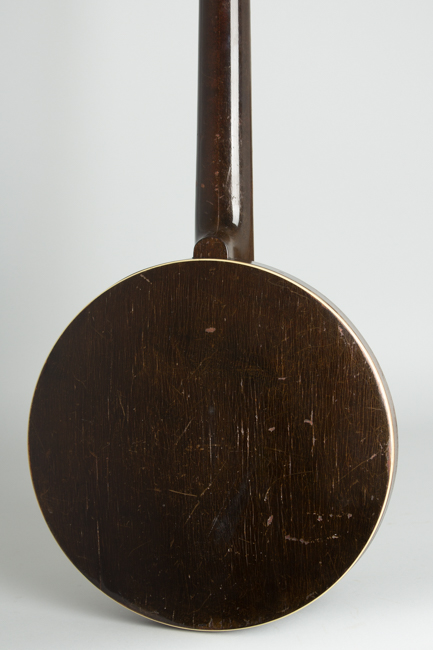 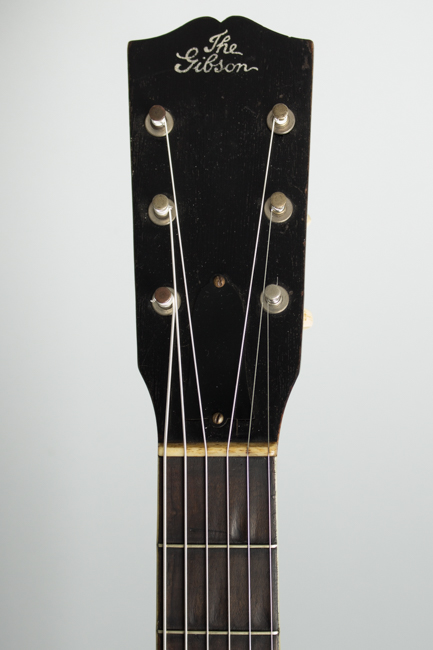 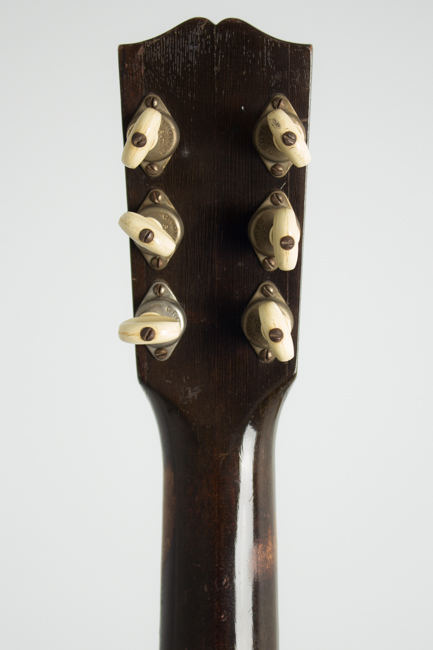 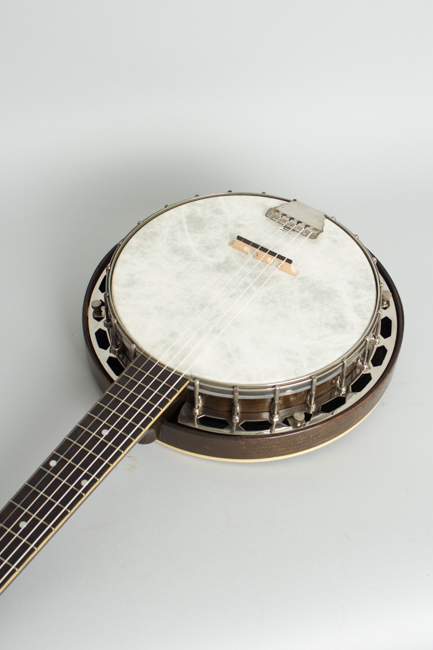 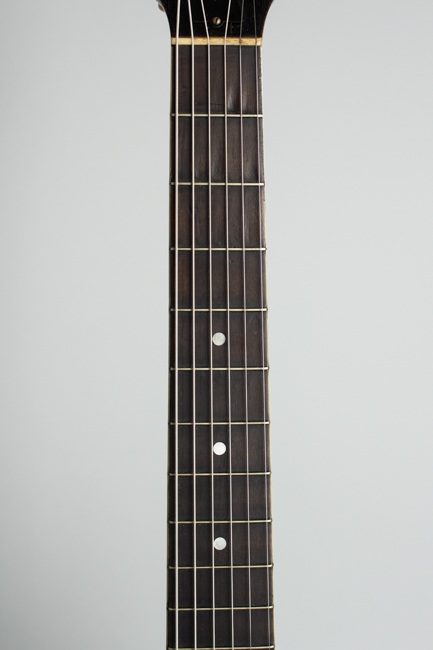 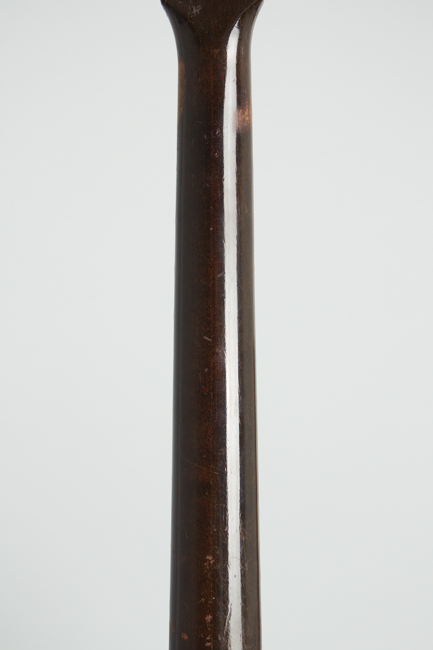 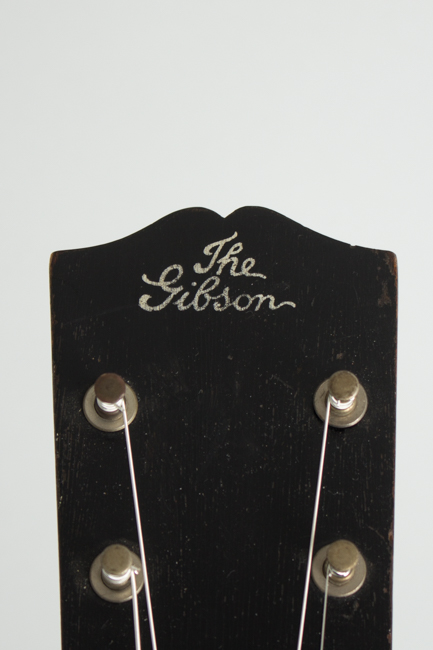 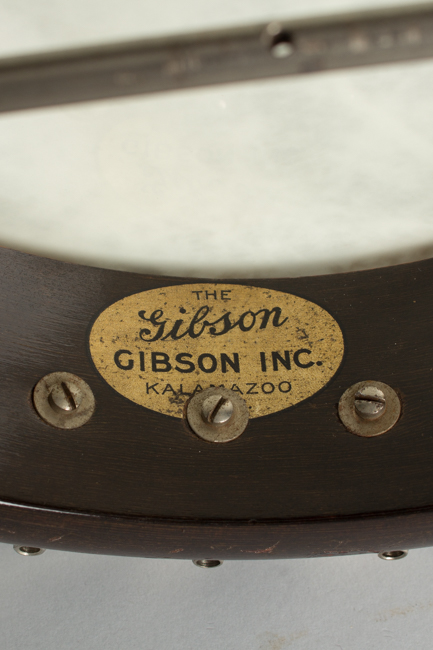 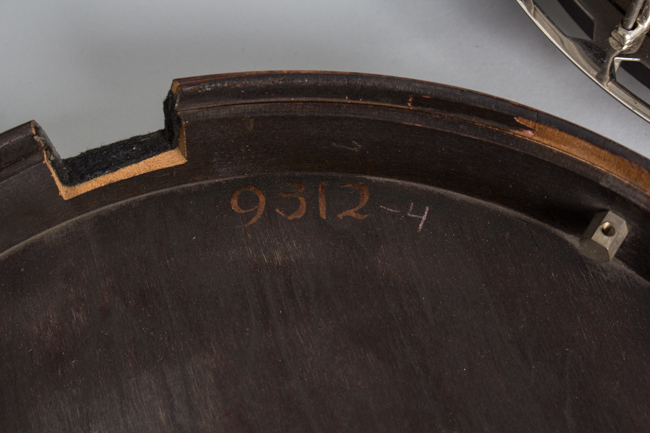 Here is a nice example of one of the Gibson company's more elusive creations: a six-string Mastertone-era banjo. This is a fairly rare instrument, even more so than the company's earlier "trap door"-style large-rim guitar banjos built prior to 1925. This one carries a factory order number from 9312-4 stamped in the rim and marked on the resonator internally in white paint, indicating it was the 4th one in a batch built in mid-1929.

Very few batches of these were assembled in any given year, as the tenor banjo was by far the best seller. The GB-1 six-string banjo is built on the standard 11" Mastertone-style rim but without any of Gibson's elaborate tone rings, just a simple solid metal hoop-like ring sitting atop the rim. The model is basically equivalent to the TB-1 tenor from the same year. It carries the older-style two-piece tube-and-plate flange that would be superseded in a couple of years by the cast one-piece unit. The sound on this banjo is mellower than a Mastertone, still fairly loud but with less overring and snap.

The neck is a substantial round-backed affair with a bound dot-inlaid ebony fingerboard and a guitar-shaped headstock with "The Gibson" in silver paint script. The headstock carries six individual Grover "two-tab" geared tuners and the typical Gibson truss rod.

This GB-I was the less expensive sister to the Mastertone GB-3 that early country fingerpicker Sam McGee used to back Uncle Dave Macon and record several of his most famous pieces, and is basically the same instrument minus the Mastertone tone ring. In more recent times, the Gibson six-string banjo is most often associated with Neil Young. The GB-1 is a cool Gibson rarity and still one of the best banjo-guitars extant. This is a good-playing example and makes a fine "Git-jo" for a variety of styles.

This banjo shows some general wear but remains largely original and an excellent player. The finish is all original and unaltered with scuffs, dings, and dents, especially on the resonator back. The plating shows some loss, mostly to the hooks. All the hardware is original except the tailpiece, which is an old period guitar unit adapted to fit a banjo rim by bending it to shape and securing it with the outside coordinator rod nut. This semi-amateur fix of generations ago looks good and actually works very well, so we left is as it has been.

The instrument is set up with a modern Fiberskyn head and replica Grover-style bridge; it plays and sounds excellent with a sweeter, plunkier tone than the fancier tone-ring equipped models from Gibson and others. A neat find in a period 6-string and a very pleasant instrument to play, perfect for the front porch in Willoughby. Excellent - Condition.
×