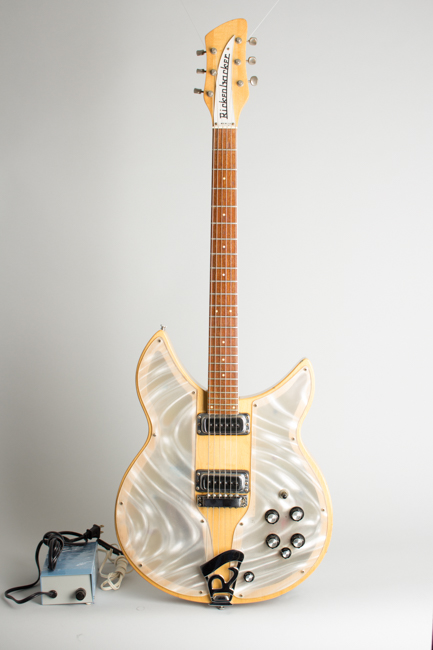 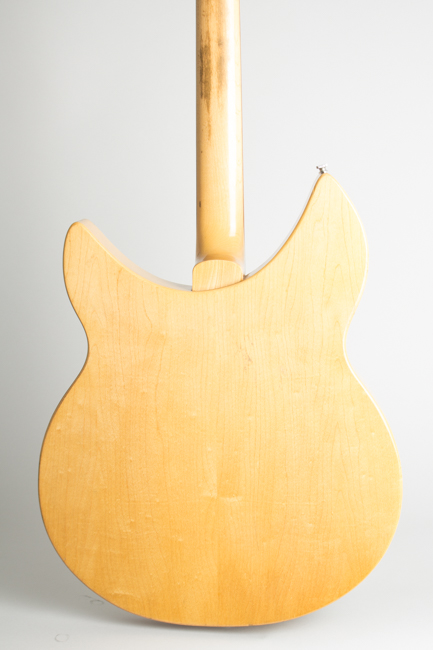 In the early 1970s, as their signature semi-hollow body guitars were falling out of popular favor, Rickenbacker was casting about -- some might say desperately -- for new ideas. As it turned out, it would be the 4001 bass that would carry the company through that decade until the "jangle" sound returned, but in the meantime some very oddball concepts were tried. This Model 331 represents perhaps the oddest, yet also most engaging and certainly memorable of these high concepts. This is the infamous "Lightshow" guitar, which in the company's own words "combines the fine musical instrument with the thrill of a light show". As actual lightshows had become a big part of the rock experience in the late '60s, one can see where the inspiration came from, but the execution is decidedly unique.

The model 331 debuted in mid-1970, and was technically offered up into 1975 although most extant examples seem to date to 1971. This guitar has a serial number dating to October 1971 and is a "second series" Model 331. The very early versions had clear lights and tinted filters to create the swirling multi-colored effect. This one uses different colored bulbs and greatly improved electronics for the lights, with internal circuit boards in place of hand-wired sockets. It is also the only Mapleglo example we have ever seen; most model 331s have a dark burgundy or red finish.

The body of the 331 is slightly deeper than the standard Model 330, with the top of the guitar covered with Lucite panels over translucent swirled plastic sheets. When the instrument is played, the colored lights inside respond to the pickup signal, flashing on and off to different frequencies. The effect is pretty unmistakable, and a lot of fun particularly in the dark! It does require an outboard transformer unit plugged into the wall, so stage mobility was limited somewhat!

The rest of the guitar has typical Rickenbacker features for 1971, a transitional time for the company in general. It mounts the recently introduced 24 fret neck with a bound dot-inlaid fingerboard, with a more substantial heel joint than earlier models. The sonics are taken care of by two of Rickenbacker's then-new "Hi-Gain" pickups with black caps over the polepiece wired for stereo or mono output with the standard 5-knob control rig. The small sixth knob by the tailpiece controls the sensitivity of the lights, which is also tweakable via three mini-pots inside. The guitar plays and sounds like a standard Rickenbacker Model 330, feeling just a bit larger and heavier.

Most Rickenbacker Lightshow guitars produced were six-strings like this one; a small number of 12-strings were made and even fewer basses. Roger McGuinn used a custom 341/12 live into the later 1970s, usually for the "Eight Miles High" encore at shows. In the early '70s John Entwistle often posed with one of the basses, though it doesn't appear to have seen much stage use. The Model 331 actually does work as intended and is a dazzling and spectacular stage instrument, although it has a propensity to overheat if left plugged in for more than 15-20 minutes. They were very expensive when new and today are extremely rare with the status of the most celebrated of collectible Rickenbackers. This one has seen some hard use but been lovingly fully restored, and is in its own weird way as cool as any guitar we have ever seen.

This Lightshow guitar is fully functional, and is original except for a set of Studio California replacement internal electronics circuit boards that control the lighting element. These light system boards are exact replicas of the originals, painstakingly re-created by Studio California's Paul Wilczynski for this instrument. The restored lighting rig was personally installed, signed, and dated by Paul Wilczynski in 2014. The guitar's other components, including all external hardware, pickups, and wiring are original with pots dated to the 30th week of 1970.

Amazingly enough, this extremely rare guitar was once someone's gigging instrument -- probably for some time. There is wear on the back of the neck down to the wood and some light fingerboard wear in the lower positions. The body shows a bit of buckle wear to the back and a number of dings, dents, and scuffs overall. The neck shows a typical repaired fingerboard separation on the treble side, so often seen on older Rickenbackers with the original dual truss rod system. The frets have just been crowned and playability is excellent.

These Lightshow guitars were mostly regarded as a novelty when new, but this one was a working guitar somewhere and shows it. It remains ready to dazzle, complete with a repro power transformer for the lighting rig and a '60s Rickenbacker silver case that is worn but still functional. Very Good + Condition.
×