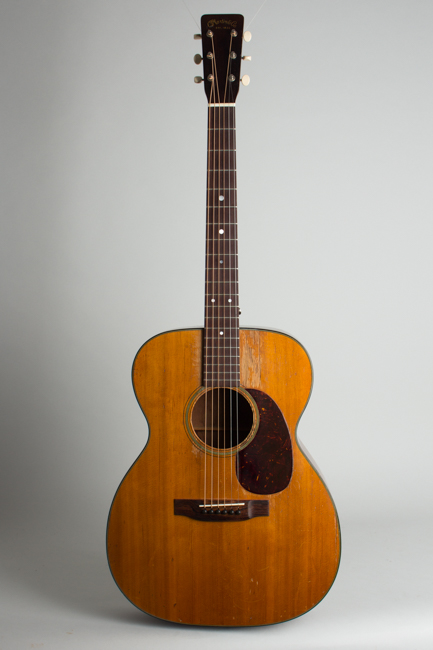 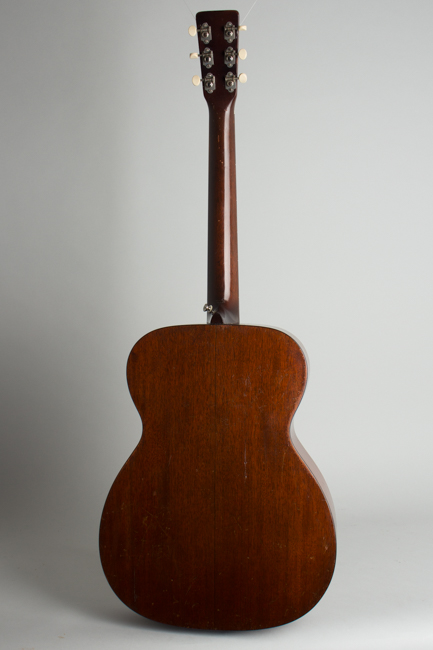 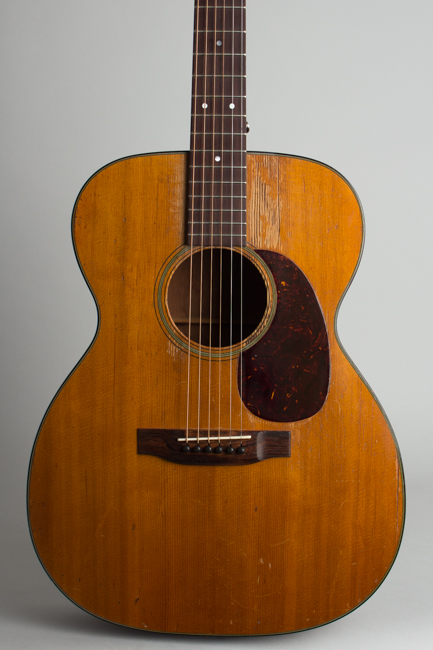 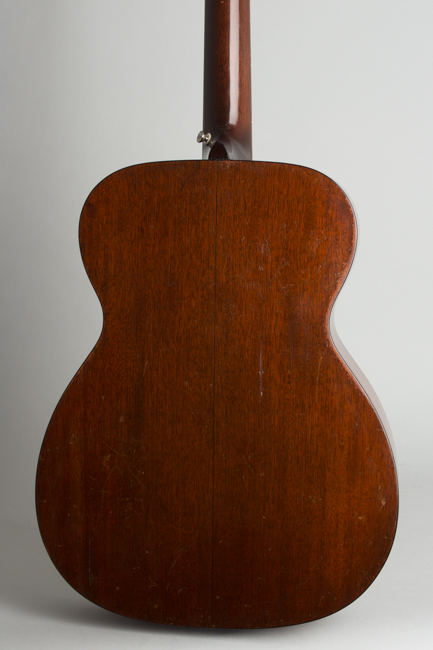 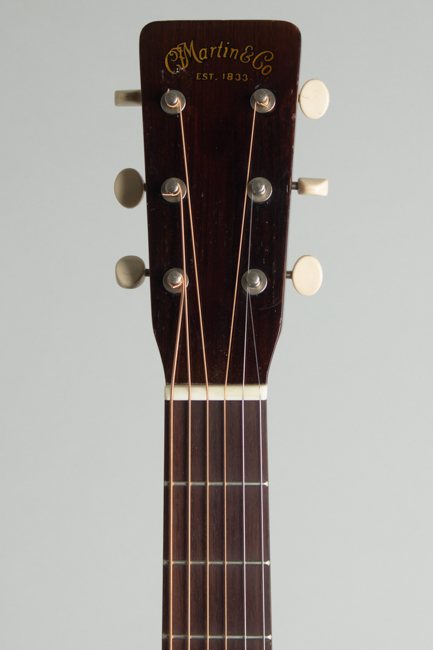 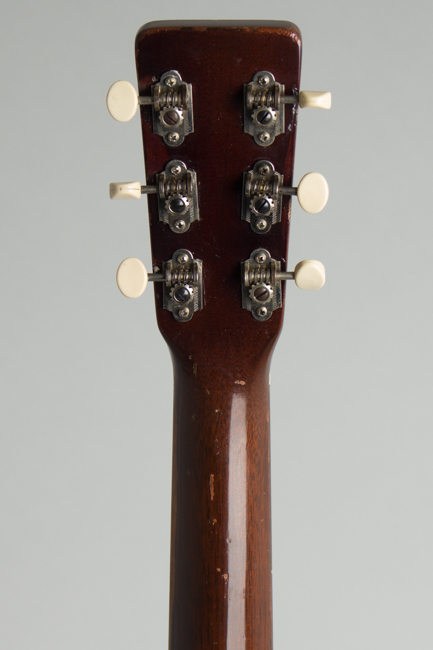 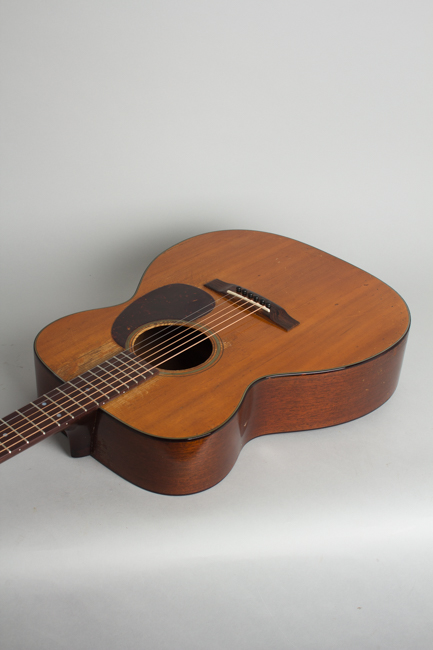 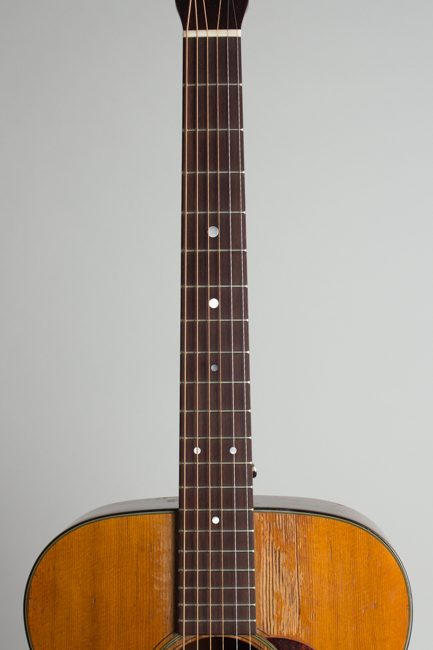 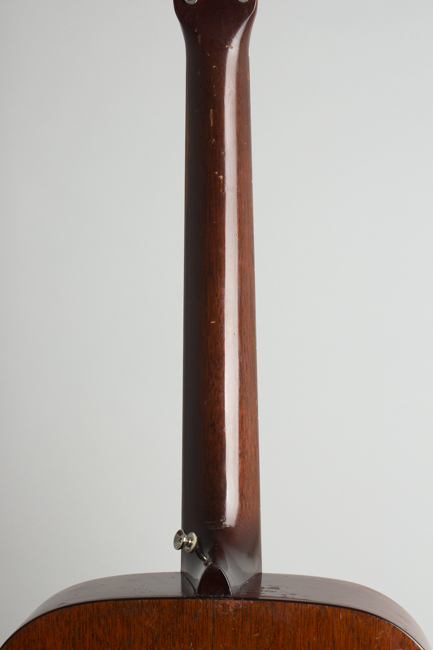 To many players and Martin fans, the 000-18 -- even a very heavily played in one like this -- remains one of the company's most propitious combinations of wood, wire, and inspiration. The light mahogany body coupled with a spruce top makes for a transparent but warm and responsive guitar; the 15" wide narrow-waisted 000-size body contributes both depth and clarity to the sound. This 14-fret 000-sized body was introduced with the OM-18 in 1930. After 1933 nearly all Martin guitars were built in this new "Orchestra Model" format, so the OM designation was dropped and the model simply called the 000-18, remaining one of the company's mainstays ever since.

This is not a flashy guitar; the trim is discreet with tortoise celluloid on the body edges and a simple multiply sound hole ring. In classic Martin style, the elegant understatement speaks for itself. Despite its lack of flash, this was always a fully professional instrument popular with radio entertainers, most obviously the country acts common in the Southeast. While not a particularly expensive guitar by 1950s Martin standards listing in 1955 at $120.00 (plus case) a 000-18 represented a substantial investment to many players.

This very worn-in example was built late in 1954, one of a total of 452 000-18s shipped that year. It incorporates typical post-war Martin style 18 features including lovely mahogany on the back and sides, a superb straight-grained spruce top, rosewood fingerboard and bridge, and tortoise celluloid pickguard and body binding. The neck is mahogany with a fairly slim "C" profile; the fingerboard inlay is mixed size dots and the tuners are openback individual Waverlys with plastic buttons. This 000 has seen its share of use and wear but is in excellent playing condition and sounds lovely. It is a fine fingerpicker's instrument but also has a lot of punch and clarity as a straight rhythm machine as well.

This very well-worn-in old Martin has likely been some interesting places and played a lot of music over the past 65 years. It shows general wear and a number of repairs but retains its vintage sound and character fully and has the feel of one of those "ultimate songwriter's guitars", where the tunes seem to flow out of the instrument.

The entire guitar shows signs of heavy use. There is a lot of pick wear into the wood around the fingerboard end, the soundhole and just at the back edge of the pickguard. The finish on the entire instrument shows dings, dents and scratches too numerous to catalog. The top has a number of deep scratches along the grain that appear to be cracks but when inspected from below prove to be just scratches. There IS one old repaired top crack evident right by the edge at the turn of the lower treble bout, and a small cleated crack under the bottom edge of the pickguard. The top is actually in better structural shape than many similarly well-worn Martins, with none of the long splits behind the bridge we often see.

There are several grain cracks to the back that are solidly but sloppily sealed up, with some attendant errant glue marks. There is a spot of finish loss and flaking on the side just above the heel which is likely the result of steam escaping during the neck reset; this is not finished over. The sides show several small impact cracks and dents, all repaired and none of any significant structural import. The back of the neck appears oversprayed, but the body finish remains entirely original.

An old but later period short-saddle rosewood bridge is fitted, the original small maple bridge plate is intact and in surprisingly good shape. There is also an older neck reset that left a small crack in the very lower tip of the heel, which is finished over but visible. The guitar is fitted with a newer rosewood fingerboard in the correct pattern including the inlay, frets and nut. There appear to have been several sets of tuners fitted but original style Waverly openback pegs are back on; this resulted in some chipping patching to the headstock face that is finished over. There is a large strap button fitted on the treble side of the heel.

This guitar plays and sounds great, and wears its scars proudly. Its most recent owner passed on and we are told this was his pride and joy favorite guitar, and it certainly has that feel to it. Not a piece for the clean freak or collector, but just a great playing and sounding old Martin with stories to tell, if you know how to ask. Overall Very Good + Condition.
×