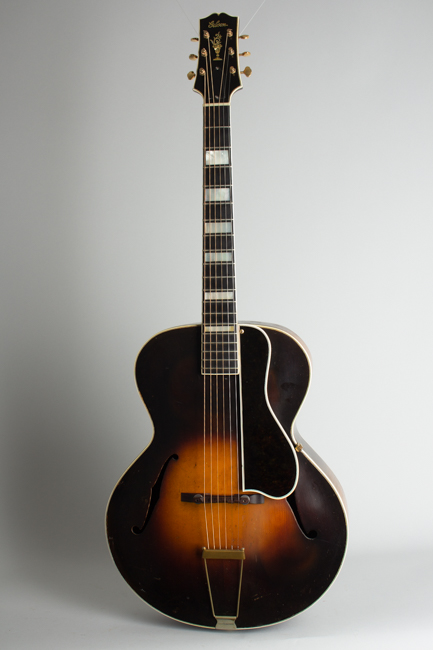 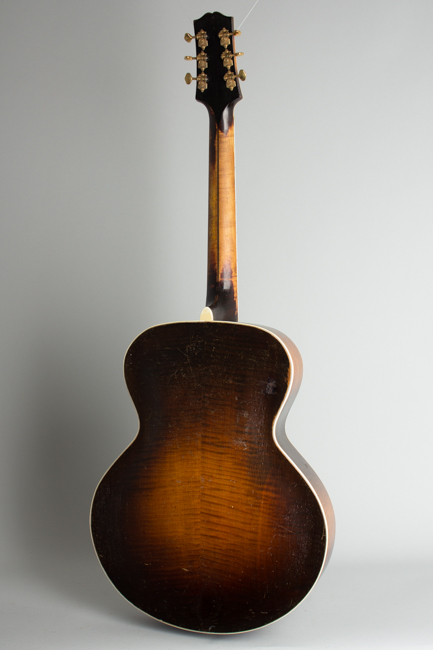 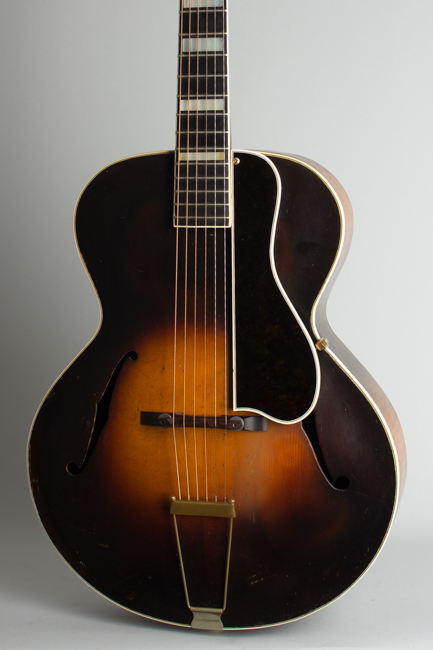 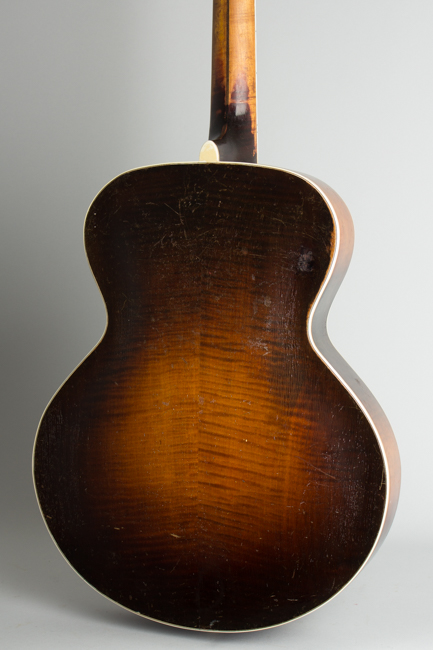 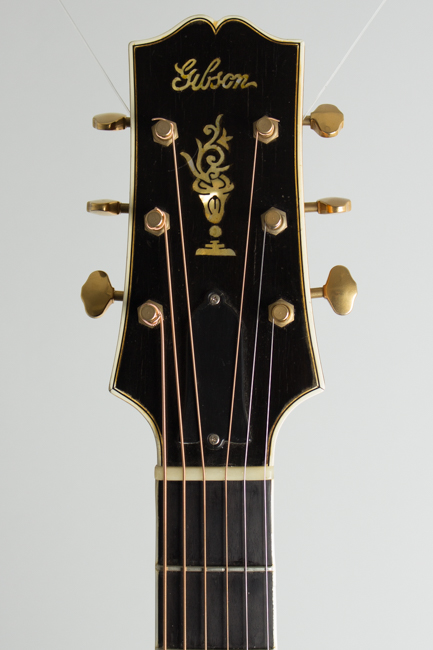 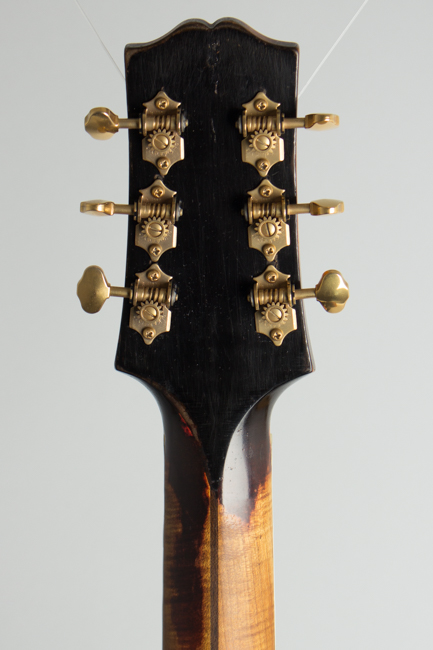 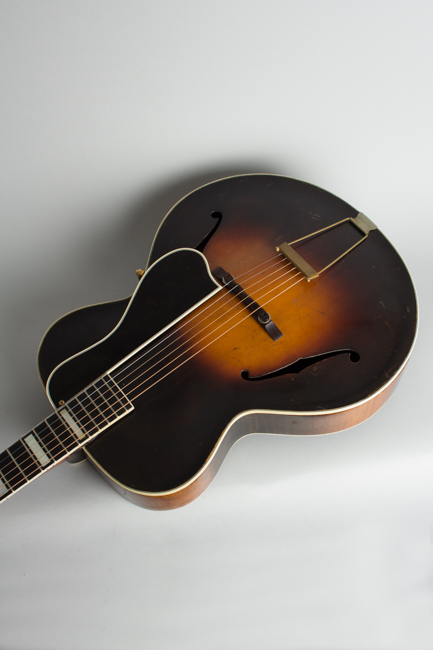 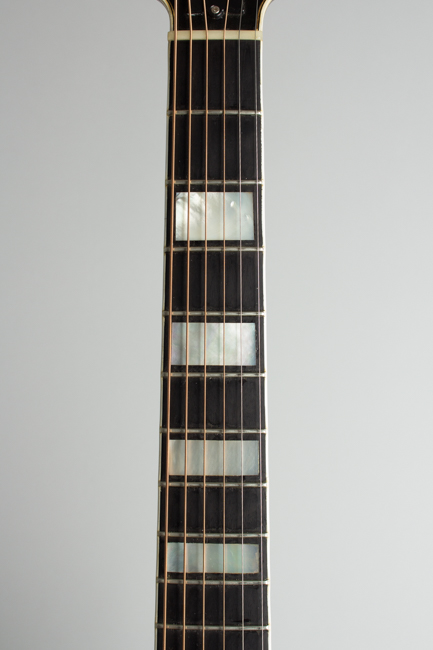 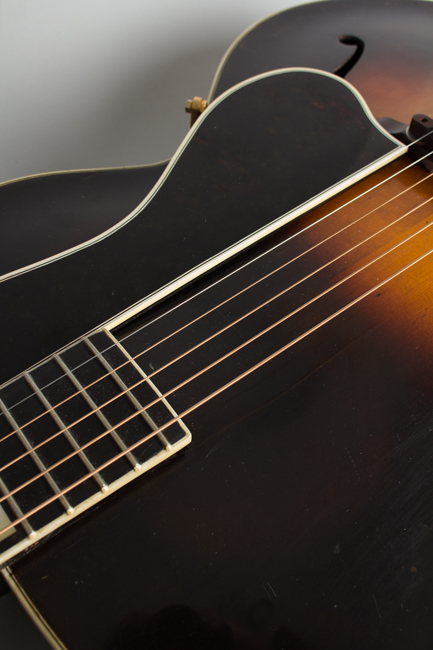 This 1934 L-5 has a somewhat checkered life, but has been well-restored and is now a fine player's example of the pre-eminent orchestra guitar of its era. The L-5 was the original f-hole archtop guitar, debuting in 1923-4. At the time this one was built, ten years later, it was still the top of Gibson's line and generally considered the finest carved top guitar made.

Orchestra and jazz band banjoists had by this time almost universally converted to guitar; the $275.00 L-5 along with Epiphone's competing Deluxe were the choice of nearly all top professional guitar players of the time. Eddie Lang, the era's most influential guitarist, went from a Gibson L-4 to a dot-neck (probably 1927) L-5, then to an early block neck L-5 around 1930, setting the trend for all to follow. In 1934 the L-5 still ruled the roost for orchestra guitars, having given Gibson a dominance in this style of instrument that the company never lost.

That said, these early L-5s are fairly rare guitars today. Retailing at $275.00 (plus case!), the L-5 was extremely expensive (a top-of-the-line Martin pearl-trimmed Style 0M-45 retailed exactly $100.00 less). At the height of the Depression, only top professional users with steady salaries could afford the indulgence of such an instrument.

Most 16" 1930s L-5s were used extensively for many years, and this is definitely one of them. Some owners preferred them to any later guitars and they can be seen in the hands of recording studio players well into the 1960s. As working guitars, these instruments have often been heavily modified, refitted, or refinished. This one was once converted to an electric guitar but has since been returned to its original acoustic form and remains a superb instrument with its original character restored.

This guitar shows typical features for an early 1930s L-5; the transition between variants of this model is particularly inexact. The side-line bound, straight-end ebony fingerboard has pearl block inlay in place of the dots used on the earlier versions. The 3-piece laminated curly maple neck has a "V" spine -- this one feels rounded down a bit -- with a relatively shallow profile. The pearl inlaid flowerpot in the triple-bound headstock and straight across "Gibson" logo are the hallmarks of the early 1930s L-5. This guitar originally had the then-new Grover G-98 tuners with metal "butterbean" buttons, and now sports reissues of the same.

The body on this particular guitar is slightly larger than many early L-5s at 16 3/16 inches wide, and is triple-bound back and front. The long triple-bound celluloid pickguard is a good reproduction of the original, screwed to the top by the neck block instead of pinned to the side of the fingerboard. The top, back, and sides carry a beautifully blended dark sunburst finish; the back is superb tight-grained curly maple. The tailpiece bar is the earlier "string over" style, but mounted backwards as Gibson did in this period to use them up. The adjustable ebony bridge is a modern piece.

This particular guitar is extremely well-played, and it's easy to see why. It has a powerful and very versatile sound typical of the best early L-5s; simultaneously warm and incisive with plenty of depth. It plays very well and is extremely responsive for an archtop guitar...it even sounds lovely fingerstyle! This is an extremely fine sounding instrument, and a more affordable example of one of our all-time favorites.

This early L-5 looks to have had an eventful life up to this point, including some alteration and subsequent well-done restoration. Once converted to an electric instrument, it has now been returned to its original configuration as a purely acoustic carved top guitar. The top required a patch near the fingerboard end to repair an old pickup installation; it has been carefully restored with a piece of spruce to the original pattern. This can be seen on careful observation of the area. Small holes for two knobs and a jack (in the usual areas) were similarly filled with matching wood and touched up; the job is quite well-done, but again can be seen on close inspection.

The original sunburst lacquer finish was retained as much as possible; there is a clear overspray to the top and some heavier touch up to the darker areas to cover the repaired sections, but the original tone of the 1930s Gibson finish has been preserved. The back and sides retain their original finish, with some fairly heavy wear overall and an area of touch up to the lower side where the jack repair was affected. The back of the neck is worn down to the wood over much of its length as well. There are a few small screw holes on the side of the fingerboard and neck heel from previous pickup and strap button installations.

The guitar has also been refretted some time ago and the fingerboard binding replaced. The gold-plated Grover Sta-Tite style tuners are modern replacements, as are the bone nut and truss rod cover. The headstock face is untouched original finish, the back has been overfinished to cover marks from old tuners. The bridge is a fairly generic rosewood piece and the pickguard and bracket are correct style reproductions. The tailpiece remans original.

Overall, despite the extensive work, this remains an extremely fine instrument, as are most early L-5s. Notwithstanding the unfortunate modifications in the past, this remains an excellent-playing and wonderful-sounding guitar. This is the second L-5 of this period we have seen with this same restoration -- now that these archtops are once again valued for their original character, decades of prior abuse can be rectified! The restoration makes this an excellent player's value in a 16" L-5, one of our favorite and most requested instruments. Very Good + Condition.
×