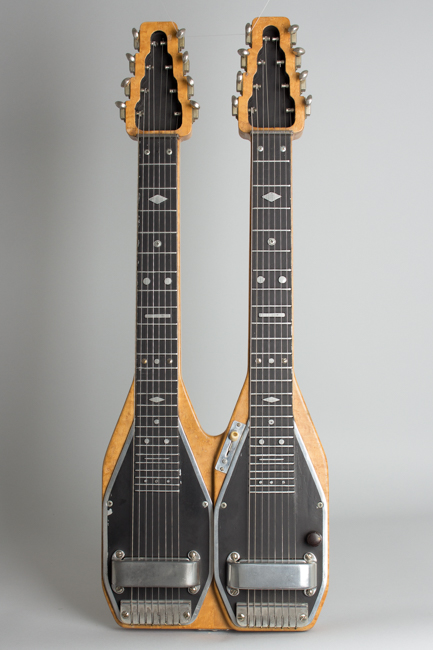 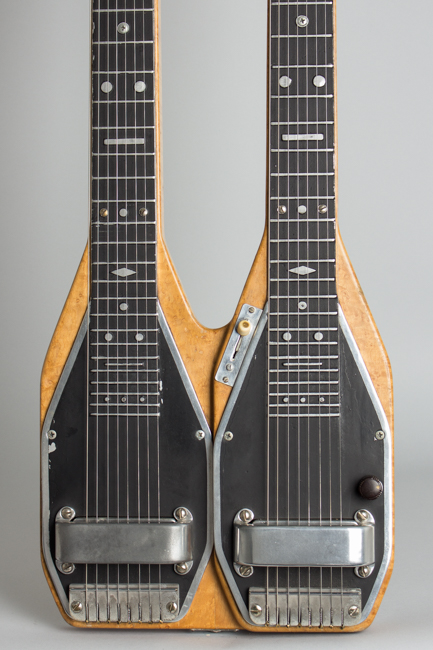 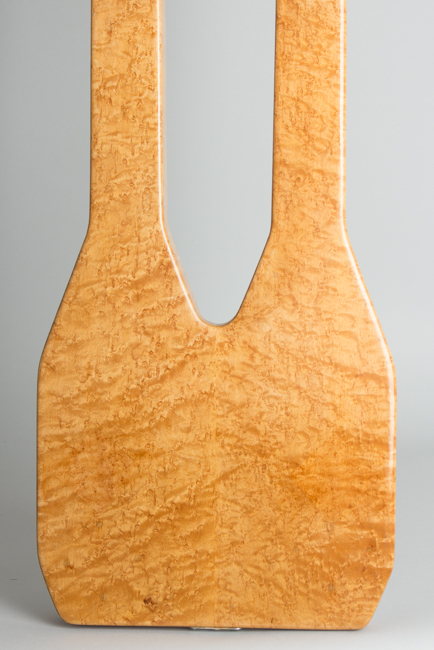 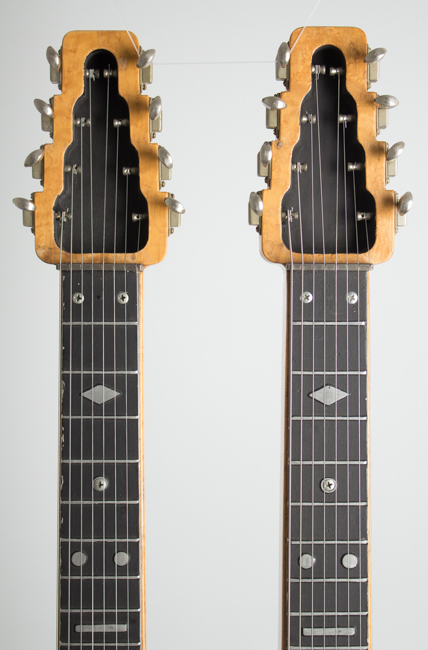 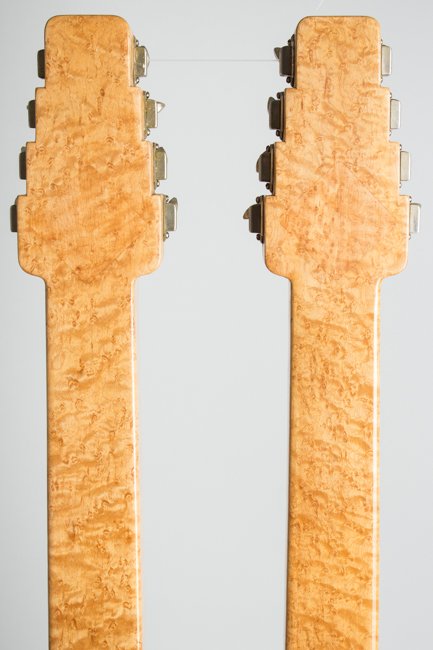 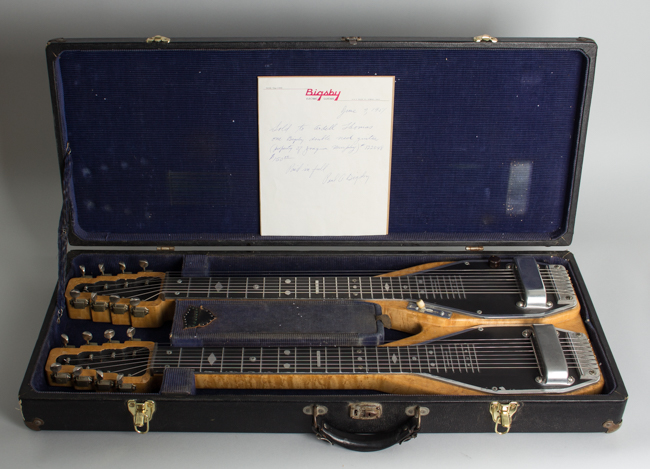 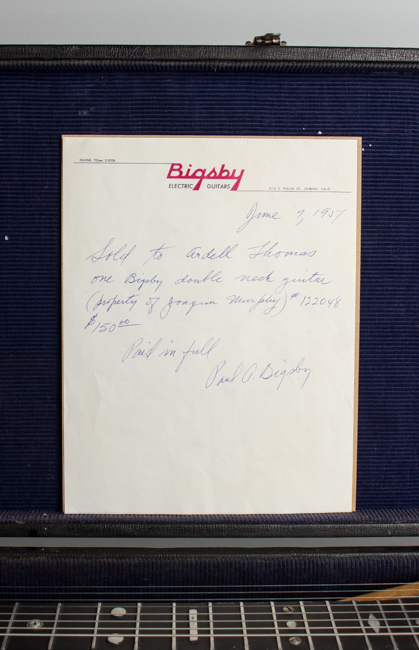 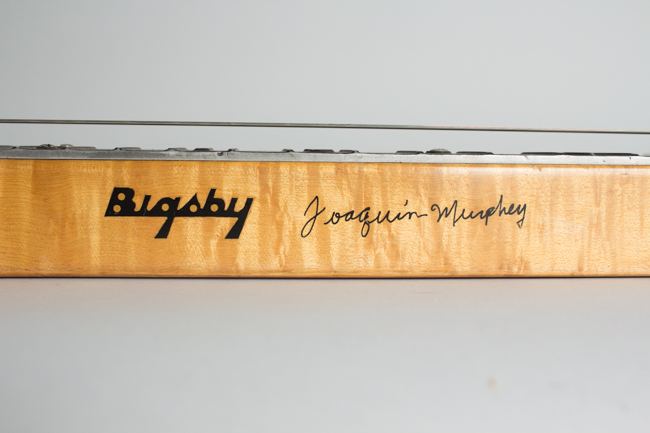 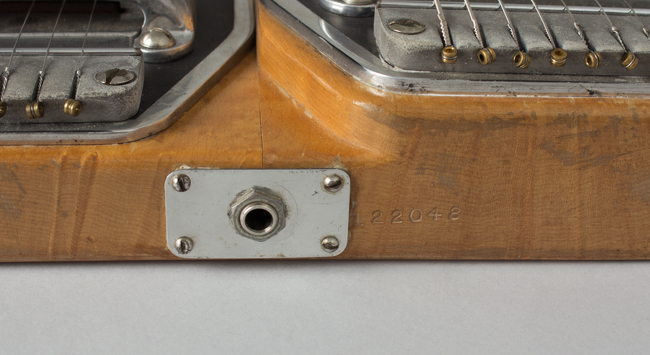 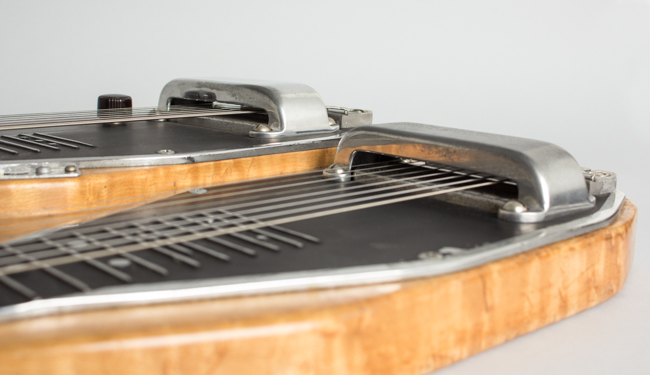 Paul "P.A." Bigsby is a legend in the history of American guitar making and an extremely important figure in 20th century guitar history. Born in rural Kane, Illinois in 1899, he relocated to Los Angeles in the early 1910s, training as a skilled patternmaker. With a strong interest in motorcycle racing and cycle design, Paul became designer and foreman for the Crocker Motorcycle Company by the 1940s, personally building some of the most highly sought-after racing cycles ever made. He also served as a director of the Los Angeles Motorcycle Speedway Association.

Through his friendship with steel player Joaquin Murphey and Merle Travis, Bigsby -- an amateur musician himself -- became interested in guitar design. In 1947 Travis conceived a solid-body electric guitar and jokingly asked his cycle-building friend if he could make it. "I can build anything" replied Bigsby, and within a short time had made from scratch the instrument Merle sketched out on scrap paper. This early project between two friends proved crucial to the development of the solid-body electric guitar.

Collaborating with Murphey and then Speedy West over the next few years, P.A. also essentially invented the modern pedal steel. He built his California hillbilly hot-rod guitars well before Leo Fender but was not interested in commercializing them to any large extent. Instead, he worked mostly alone, hand-building one guitar a month to each customer's order. By the mid-'50s a vibrato tailpiece unit he initially designed for Merle Travis was in such demand he put it into volume production. The Bigsby "True Vibrato" unit quickly became popular as an add-on accessory and was adopted by Gretsch, Gibson, Guild, Harmony, Magnatone, Kay, and others as standard equipment on a their guitars. By the end of the 1950s Bigsby phased out hand-building guitars to concentrate on this more profitable business; the familiar Bigsby vibrato is still in production and remains widely used today.

This instrument is a very early example of Bigsby's work. It is a double 8-string "D-8" steel guitar personally handcrafted for Joaquin Murphey in December 1948 (the serial number "12-20-48" actually designates the date of completion). This was well before Bigsby was working with instruments full time, when he was building one-offs for his circle of musician friends. It is almost certainly a replacement for a nearly identical steel he had hand-built for Murphy in 1944, which was the first instrument P.A. made for anyone other than himself.

Earl "Joaquin" Murphey was one of Bigsby's cycle-enthusiast friends in the mid-'40s; he was also an up-and-coming steel guitarist. Hired by star Western swing band leader Spade Cooley as a teenager, Murphey's wildly sophisticated playing was a sensation in southern California, influencing nearly every future steel guitarist.

Murphey persuaded his motorcycle designer friend to build him a guitar after trying a Rickenbacker style-instrument P.A. had made for himself -- during the war, aluminum Rickenbacker steels were unavailable at any price. Already a showman, Murphey asked for something special that would stand out visually and sonically from the crowd. The steel Bigsby supplied was the result of a master player and innovative craftsman combining their talents to create a showpiece both in looks and sound. That doubleneck was quickly put to use on stage and studio and noticed by nearly all up-and-coming players in the Western style. Murphey's first 1944 D-8 has been considered lost under unknown circumstances since at least 1948; this guitar was apparently built then as a replacement.

This beautiful sleek double-eight steel is the second generation iteration of that initial design, built to the same pattern with some detail differences and upgrades. It maintains a completely unique look, made from aluminum and solid bird's eye maple with a spectacular grain figure, Bigsby's favored wood. The metal fingerboards and body plates are integral castings, made the same way P.A. fabricated aluminum motorcycle parts and highlighted in black paint. The first Murphey D-8 had rather generic guitar headstocks; this one has Bigsby's newer "stairstep" design that eventually became standard on his pedal steel instruments. The original tuning pegs are then brand-new 1948 nickel Kluson Deluxes, the earliest version where the shaft does not go through the outer side of the casing.

The first steel made for Murphey had the earliest Bigsby pickups, patterned after Rickenbacker units with a horseshoe magnet structure. This guitar has the newer blade pickups developed in 1947-8, but still under the older-style arched handrest cover. They are controlled by a single volume knob and a 3-way selector offering either neck, or both together. These pickups were occipitally well-designed; they caught on with top players at the time and have become a highly sought-after item on their own -- some still consider them among the best units ever made.

Murphey apparently only used this instrument sparingly...he and Bigsby were already working on the triple-8 console steel that became his signature instrument when it was made. In 1951 he consigned it for sale back through Bigsby's shop, and it was sold to one Ardell Thomas. The receipt for this transaction, handwritten by P.A. Bigsby on his own letterhead, still accompanies the guitar. The instrument re-surfaced in the 1980s and was briefly loaned back to Joaquin Murphey, who resumed playing after a long layoff towards the end of his life. This unique piece is one of the most historic steel guitars extant, a fantastic piece of both Western music history and Bigsby artistry.

The guitar is in generally very original condition, with some wear and a few minor modifications over years of use. At one point the second owner added four leg sockets to the bottom (it is fairly heavy!) and these were later removed and the areas very neatly patched with matching bird's eye maple. The jack plate appears later; at least, it is not as neatly made as we would expect from Bigsby. There is some general wear to the finish and metalwork overall, but nothing excessive.

The instrument still functions exactly as intended and is simply one of the best-sounding steel guitars we have ever heard...even not plugged in it rings like a bell! Each neck has a slightly different tonal character, which may simply be due to the thicker maple body on the outside neck. It still resides in the original Bigsby handmade hard shell guitar case, lined in heavy blue corduroy fabric. Bigsby's cases are as artful as the guitars they contain. The most amazing artifact is the hand written 1951 receipt from P. A. Bigsby, documenting the sale of this guitar to Ardell Thomas and noting it as "Property of Joaquin Murphy". Overall Excellent - Condition.
×