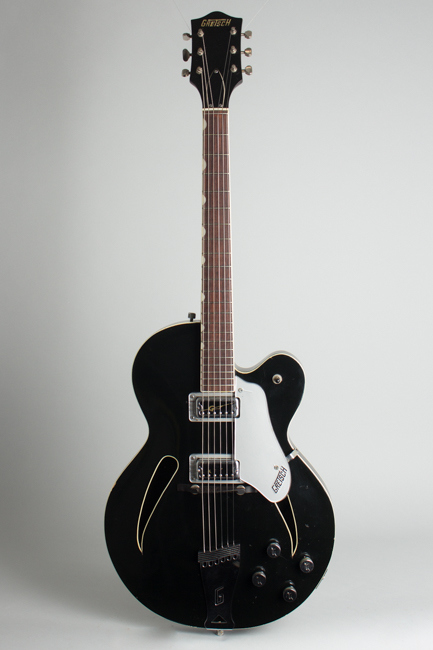 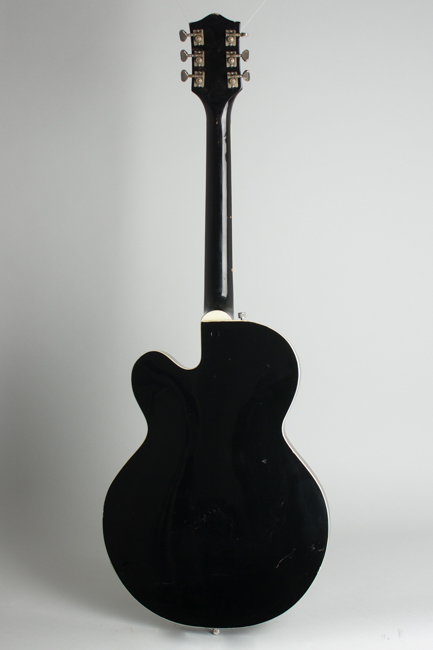 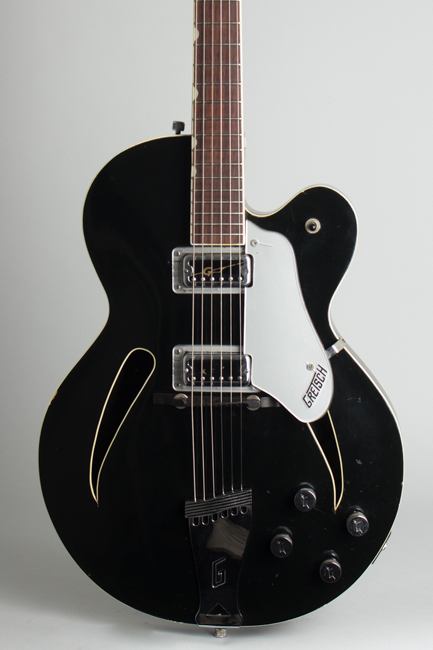 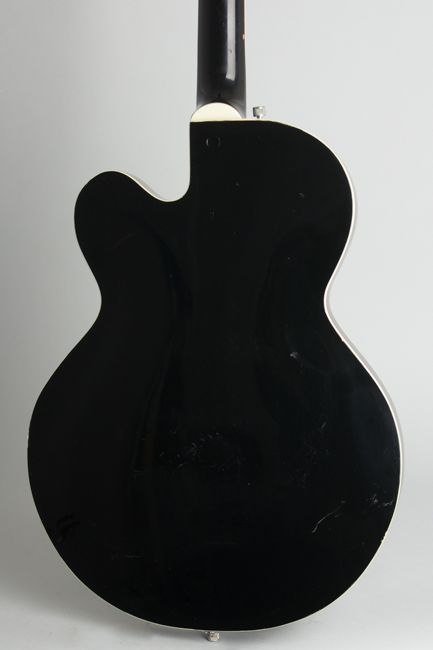 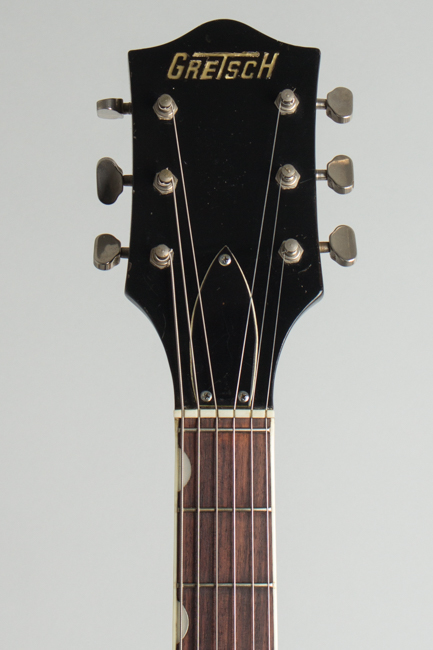 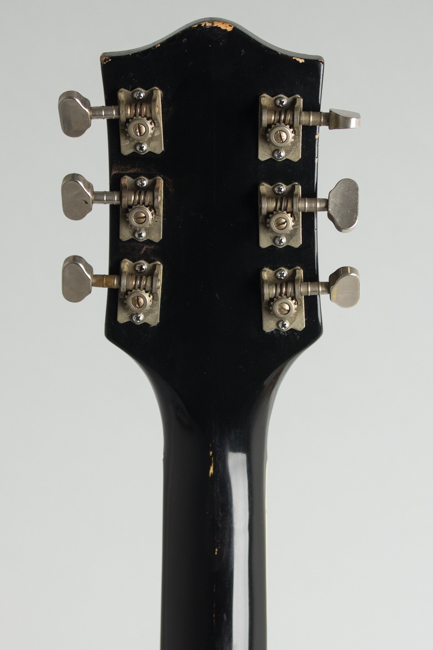 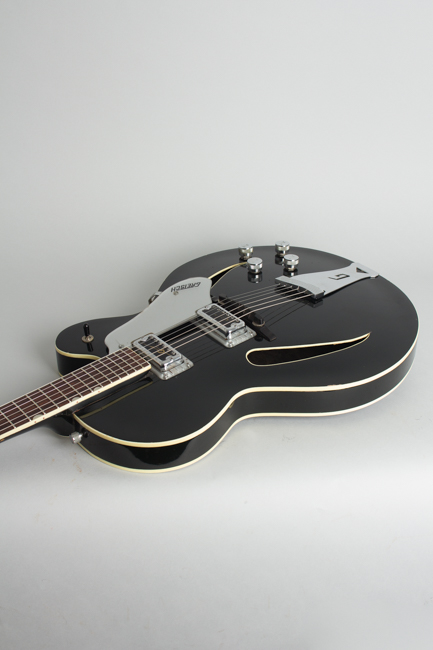 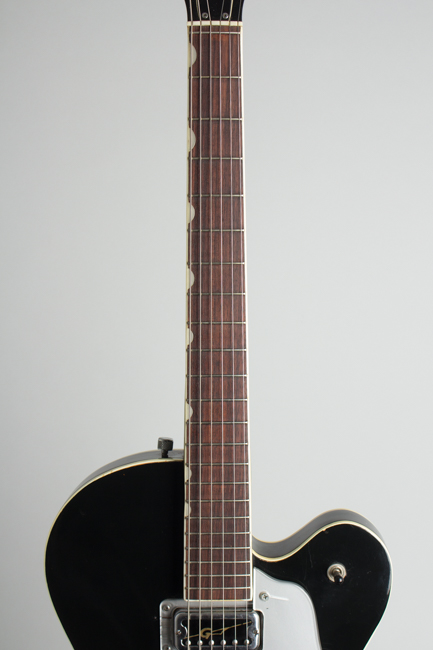 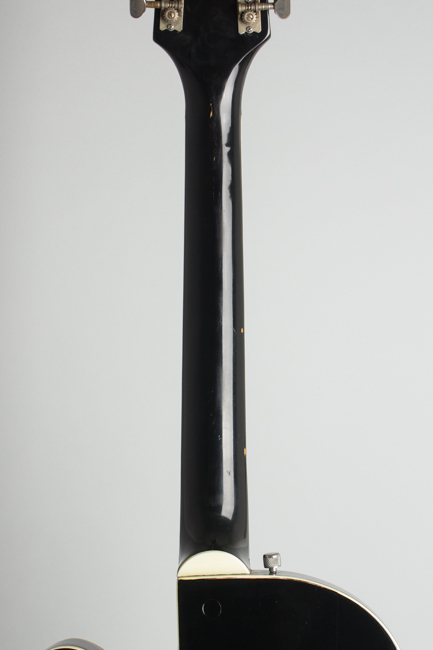 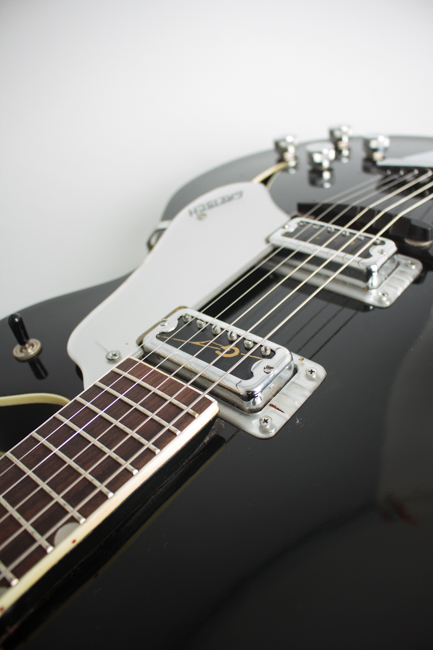 There are a number of mysteries associated with the "golden era" of Gretsch guitars; this gleaming ebony model is one of the most aesthetically pleasing of the company's sometimes inexplicable custom instruments! This "cat's eye" electric is remembered in the Brooklyn area as a special model built exclusively for the local Sam Ash music stores, offered for just a few years in the mid-1960's in black and red finish options. Some have labels and serial numbers and some don't; this one does not but the pot date codes suggest it was assembled in early 1966. They were only sold locally (Ash was not a national chain at the time) and seem to have disappeared after 1967 or so.

While the 6117 model number associated with these is the same as used on the standard Anniversary Model, this special instrument has enough variant features to qualify as its own line! It is a fully hollow, thin line electric with a very narrow rim 16" body shared with the budget "Clipper" model; the Anniversary retained a deeper body. The twin bound "Cat's Eye" soundholes were inherited from the company's 1940's arch tops; they were discontinued as a standard appointment in the early 1950's but occasionally pop up on later custom jobs.

The wiring is unusual as well; instead of the standard Gretsch layout it is more Gibson like with a 3-way switch and individual tone and volume controls. Possible someone at Sam Ash was not a fan of the quirky Gretsch wiring layout after having to explain it to countless customers! The pickups are the standard single-coil Hilo 'Tron units, the wooden bridge and "G" tailpiece are standard lower-end Gretsch fittings.

The 24 1/2" scale fingerboard is bound rosewood with the standard Gretsch "thumbprint" inlay. The neck is fairly wide and somewhat chunky for a period Gretsch, and feels fairly substantial in the hand. The headstock is unbound with a plain "Gretsch" pearl inlay. The Tuners are Dutch made Van Gents, used by some US guitar makers mostly around 1964-5 as the guitar boom stretched supplies of the familiar Kluson. Grover and Waverly machines.

This unusual Gretsch is actually a great playing and cool sounding guitar, but its wicked looks are in a class by itself. No original paper trail has been found on these models, but enough have surfaced to suggest the Sam Ash store ordered at least a batch or two for each of several years following 1964. Many have stayed in the New York area, but the total sold seems to have been fairly small compared to the standard Gretsch models. This instrument is one of the cooler 1960's Gretsch oddities, always a conversation piece and a well thought-out instrument to boot!

Overall this is a nice clean original guitar, with some light wear but none of the oft-encountered Gretsch issues. It has a good neck angle and does not appear to have had or needed a neck reset. The binding has NO rot visible anywhere, which is increasingly difficult to find. The small celluloid block on the treble side of the heel has been replaced, all else is original and in very good order.

The gleaming black finish has some small dings and dents but no major wear; the only visible repairs are a jackplate added to the side and a discreet re-seal of the lamination seam on the back of the headstock just behind the nut. The pickguard has minor cracks at the screw points.

This guitar has been refretted with period correct wire and is one of the best-playing mid-60's Gretsch guitars we have had in a while. It comes complete with the original slimline case, which is solid but has for reasons unknown lost about half of the covering on the lid and some of the strapping on the top edge. The inside remains quite clean, like the guitar but the exterior of the case suffered some trauma long ago! Overall Excellent - Condition.
×