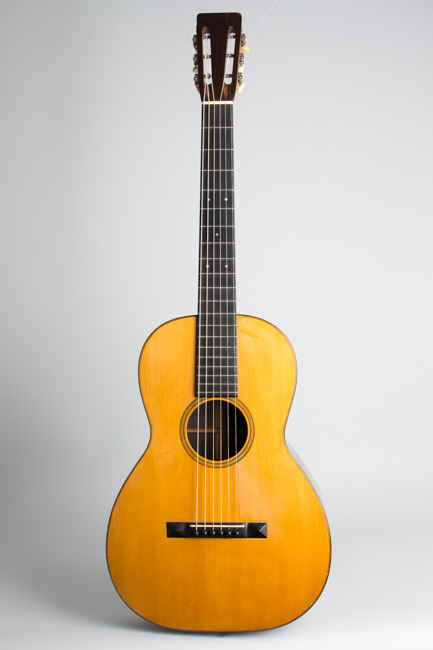 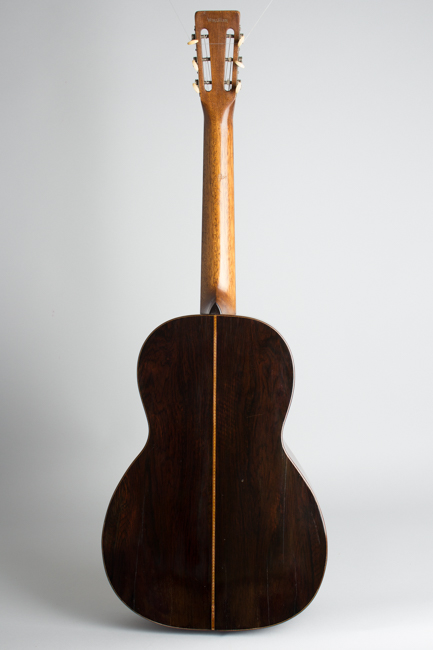 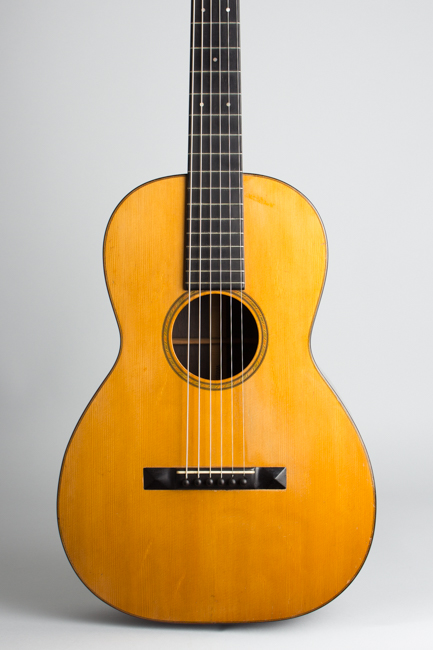 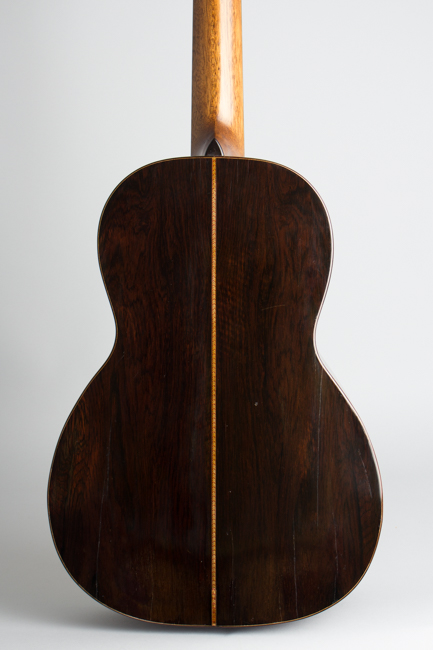 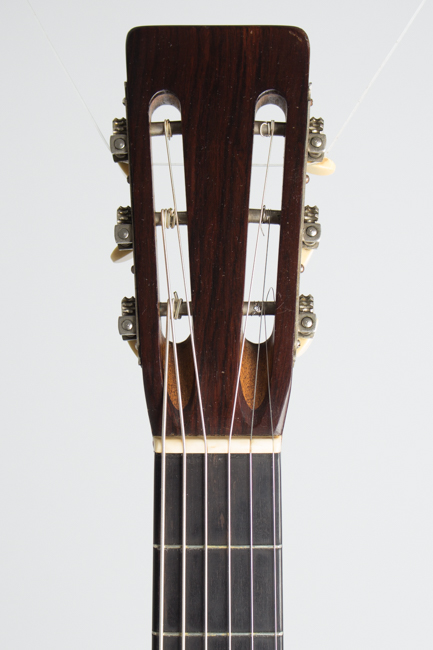 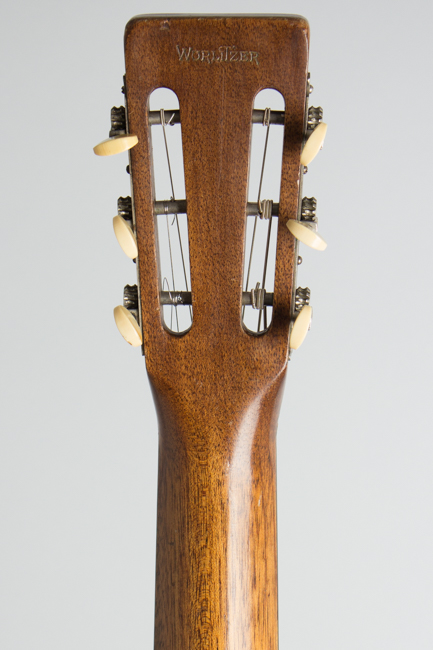 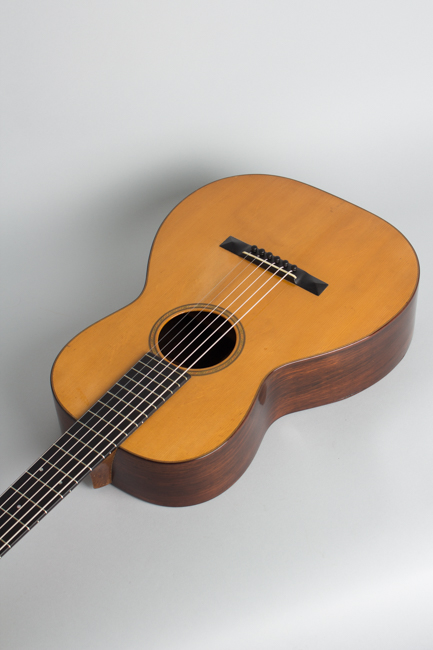 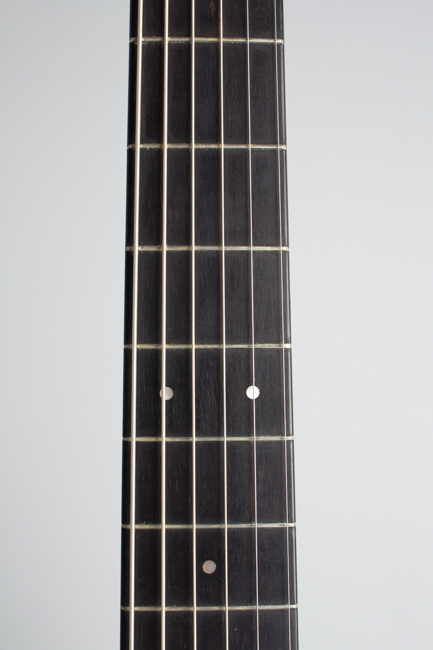 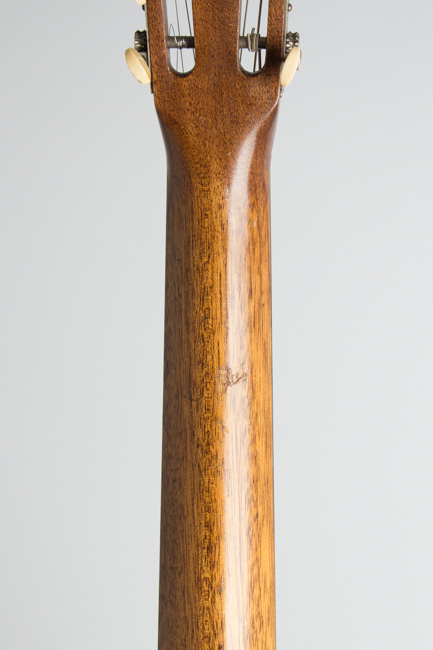 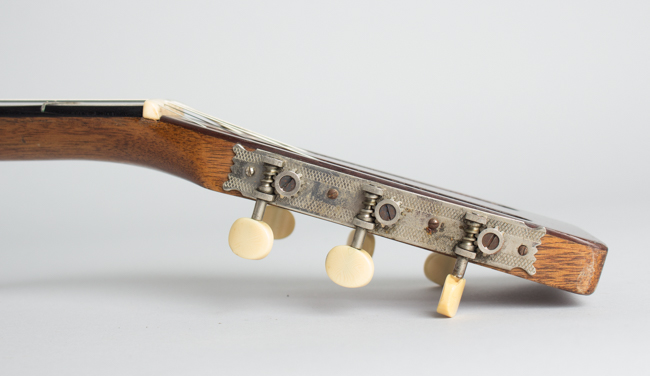 The 12-fret Martins of the 1920s are some of our very favorite guitars, and this is a lovely and quite unusual example. It is also a very rare Martin instrument, part of a special custom line made exclusively for the Wurlitzer stores from 1922-4 only. This particular instrument has a Wurlitzer stamp on the back of the headstock and inside the body on the backstrip, but no Martin markings. It also has no serial number; by February 1923 Martin serial numbers were added to the series, so this is one of the earlier examples.

The Wurlitzer line consisted of versions of a number of Martin styles, made with slightly variant features to make them look less like the regular line. This model 2088 is the same basic instrument as Martin's 0-21, but with a single ring colored wood rosette and a colored wood herringbone backstrip in place of the traditional two-tone herringbone wood trim on the Martin-branded models. The inlay in the unbound ebony fingerboard is a plain small dot pattern. These Wurlitzer instruments were produced in VERY small quantities -- only 13 total of the model 2088 were ever made.

This Brazilian rosewood flat-top is delicately X-braced in a scalloped pattern but like all higher-grade Martins of the early 1920s was not originally intended for steel strings. It would likely hold extra light steel effectively enough, but we feel it is best suited to a heavier gauge silk & steel stringing. It was not until later in the 1920s that Martin began bracing guitars regularly for steel. Most features of this guitar are pretty much as they had been since the last century, with a small pyramid bridge, no pickguard, and a wide fingerboard on the neck which joins the body at the 12th fret.

Martin's Style 21 designation signified a midline instrument; the standard Martin 0-21 was the smallest and lowest-priced rosewood model in the company's line. Models beneath this used mahogany for the back and sides. Like all Martins, it is built of the finest grade materials to the same quality workmanship standards as the highest grade instruments. The Brazilian rosewood on the back and sides has a bit of swirl to the grain that Martin would have considered a bit below the standard of their top-line guitars, but today is more prized. The straight-grained Appalachian spruce top has a lovely look with a few small bearclaw figures. The outer binding is rosewood and the position markers in the ebony fingerboard are small and discreet.

This guitar has had some repair work in the past but has not seen nearly as much hard playing as many period Martins. It remains in far better and more original condition than most period survivors nearly a century old. This is a wonderful-playing and sounding guitar within the limitations of the stringing options, and performs extremely well particularly as a fingerstyle instrument. It is also a superbly attractive Martin rarity, with the discreet colored wood trim giving it a slightly more cheerful, less austere look than its more common brethren.

This guitar remains in excellent playing condition. The top is extremely clean, with only some light dings and pick marks to the original finish mostly below the high E string. The back and sides have a French polish overfinish that is a bit shinier than the original varnish but not overly thick. The back shows a number of old grain cracks to the rosewood on the lower bouts; all are solidly sealed up but visible. The lower back edge of the body is a bit uneven; it is possible there was some exposure to moisture in this area long ago...that would probably explain the cracks and overfinish as well. At any rate, all is solidly repaired now.

There are no other alterations to the instrument -- the original Waverly tuners and even the original ebony bridge pins and endpin are still intact. The original bar frets are still intact, crowned down a bit in the lower positions. The back of the neck has a feelable capo mark behind the third fret; otherwise it is quite clean. This is an excellent-playing and sounding guitar, with a big warm sound for an 0-size instrument even with silk & steel strings. This lovely Martin rarity even has its original purple-lined hard case, something that does not turn up every day! Excellent - Condition.
×