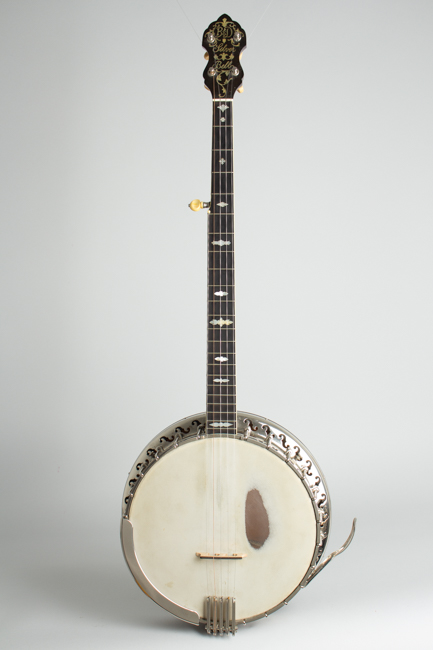 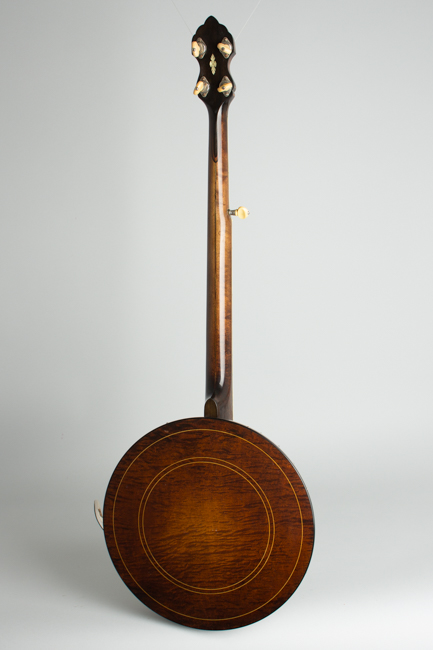 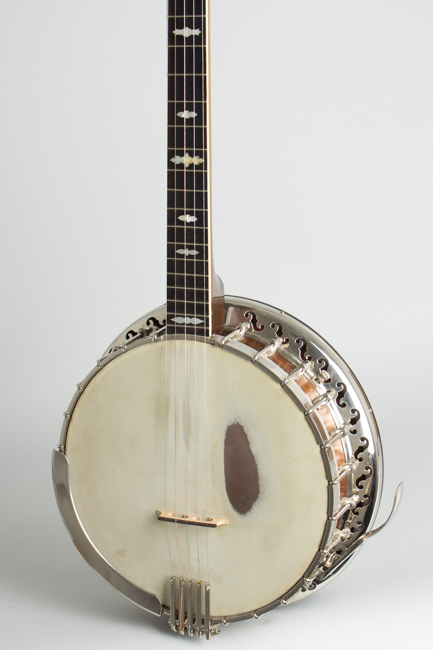 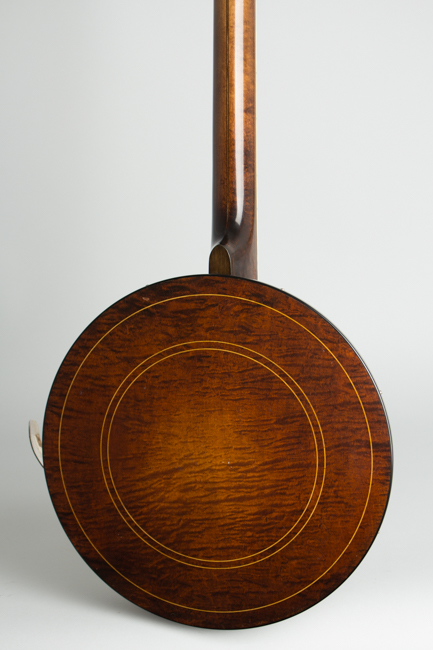 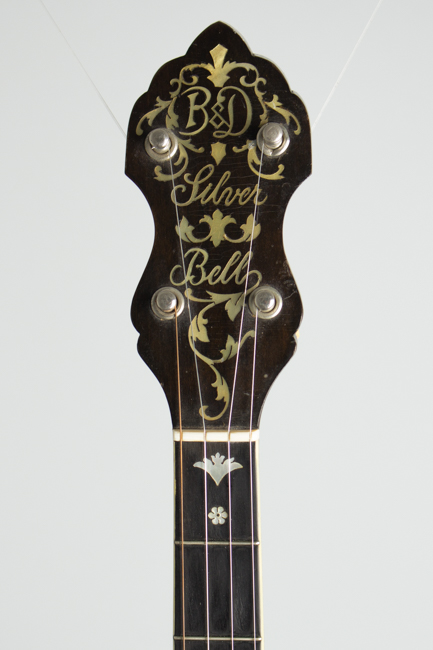 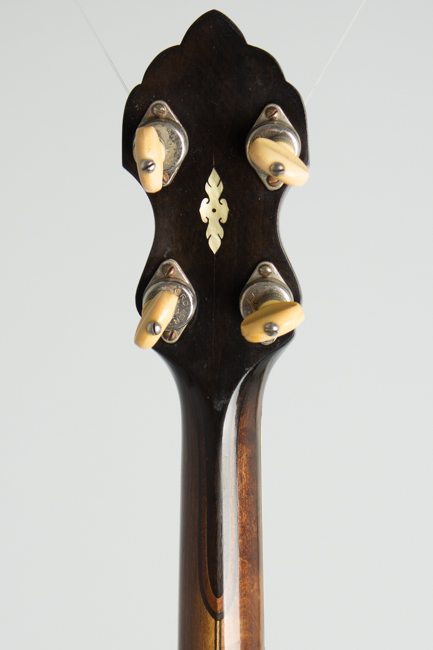 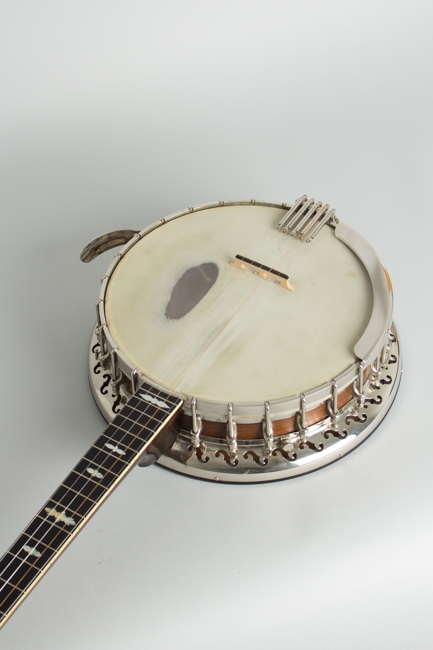 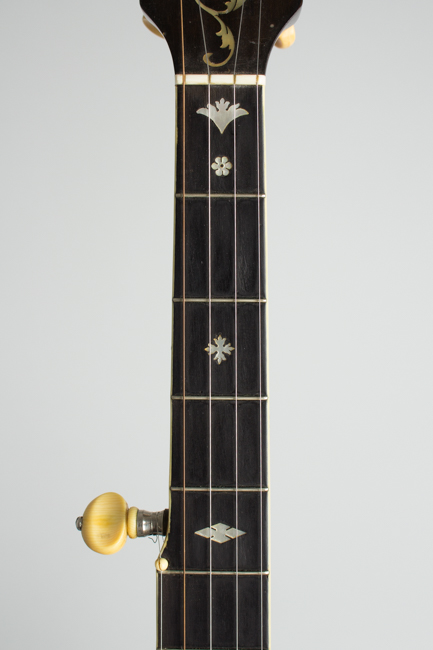 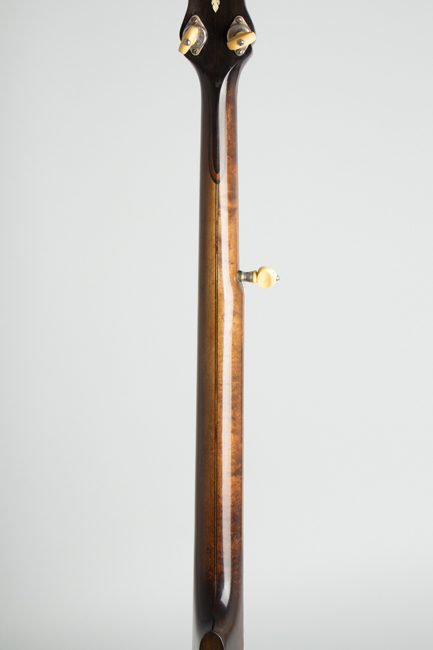 This instrument is an extremely rare, very interesting, and great-sounding banjo for the player with a taste for something different -- an ORIGINAL 5-string Bacon & Day Silver Bell. While the 1920s Silver Bell tenor and plectrum models were very popular when new and are still relatively common, an original 5-string like this is so rare most players have never seen one. Company founder Fred Bacon was a 5-string player himself, but by the time he and David Day had the Silver Bell design on the market, most working banjoists were tenor or plectrum players...at least those who could conceive of affording a $140.00 banjo! Although listed in the B&D catalogs as an option on some models, very few 5-string banjos were actually made.

This substantial-feeling banjo carries full Silver Bell #1 appointments, including the low mounted shallow f-hole flange and fancy shaped pearl inlay on the headstock face and fingerboard. There are multiple ebony/maple laminates to neck, heel, and headstock, ivoroid binding on the heavy ebony fingerboard, and black binding on the resonator rim. The tuners are 2-tab Grovers with ivoroid buttons. The resonator back is veneered with spectacularly burled maple, one of the nicest #1s we have seen, and has no name plate fitted. The tailpiece is the original 5-string Oettinger, a rarity in itself. This banjo also has the B&D soft pedal mute fitted, which provides some novel sonic effects on a 5-string.

This banjo is very loud and quite crisp but has quite a different tone from the usual Mastertone sound, with a warmer ring and great "life" to each note. The neck profile is a bit deeper than the typical Gibson Mastertone with a very comfortable feel; the neck has a noticeable "V" contour in the lower positions and gradually becomes more of a rounded "C" above the 5th fret. This instrument of course pre-dates Bluegrass banjo as a playing style but certainly has the power and projection to work in that context; it also sounds great in a ragtime or even "classic" mode. A lovely historic rarity, this Silver Bell is also a wonderful player's instrument in unusually well-maintained condition.

This is a nicely original banjo that shows some fairly minor wear but no repairs or alterations. Everything remains complete and original except for the later head and bridge -- well, OK, the retaining nut for the Oettinger tailpiece has been replaced, but that's about it. There is some fairly light wear to the finish, mostly scuffing and shallow scratching to the back of the resonator and some small rubs to the neck. The plating also shows only relatively minor wear. The frets are original and have some very light wear in the lower positions as does the ebony fretboard. The banjo is currently set up with an older plastic head, somewhat worn on the surface but well-settled in.

This is an excellent-playing and sounding instrument which appears to have seen only careful use over the past 90+ years. The original case is included with some general wear; this is enclosed in a somewhat later larger leather tan cover that has protected it to some extent. Excellent Condition.
×