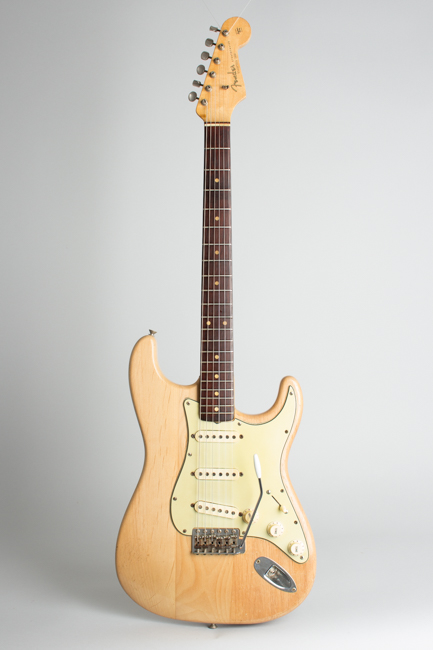 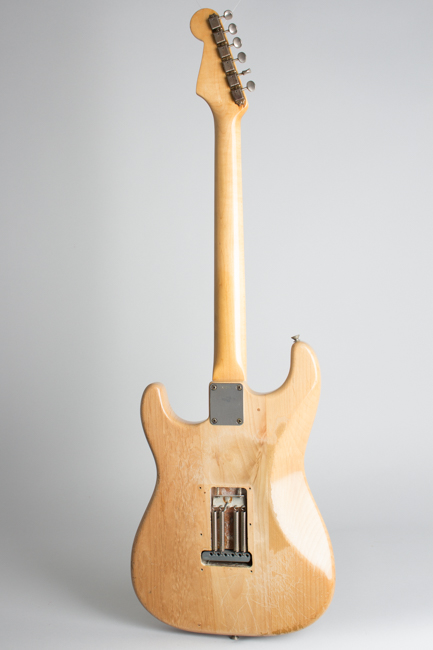 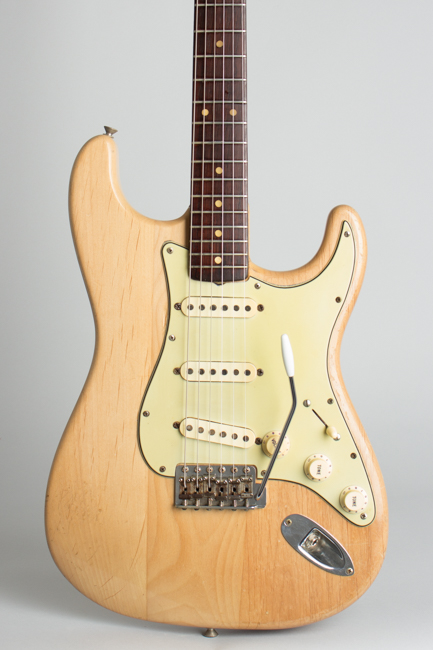 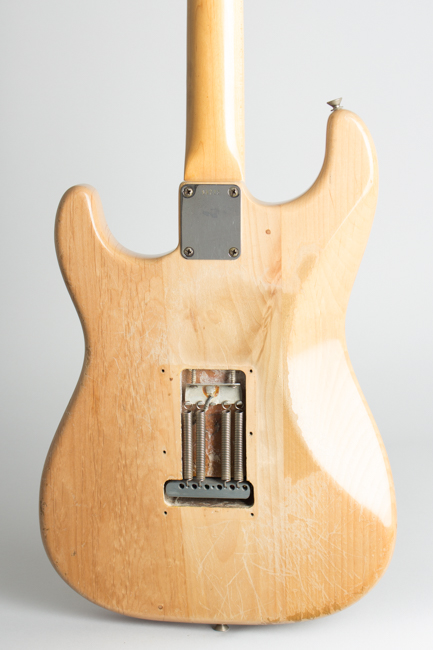 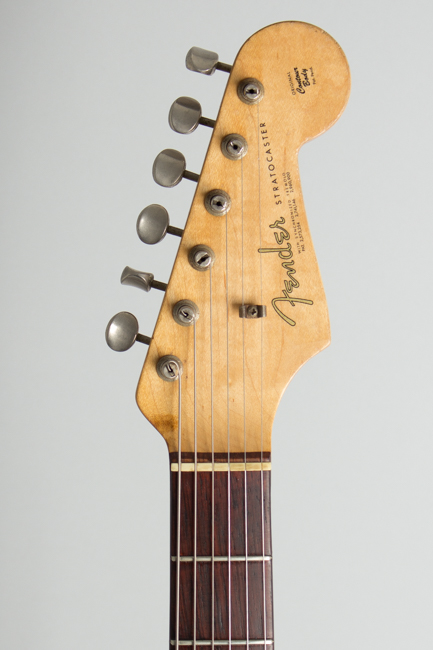 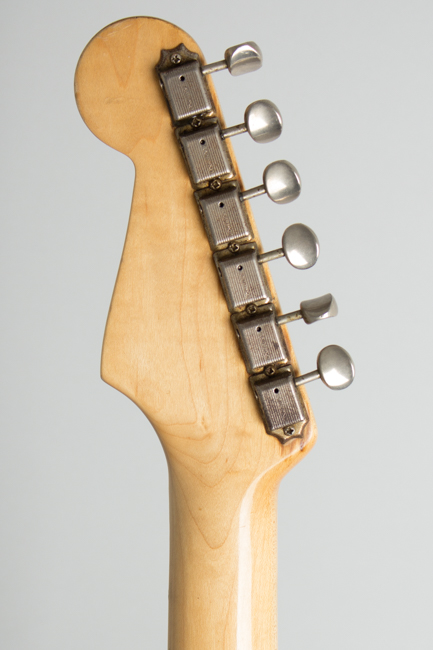 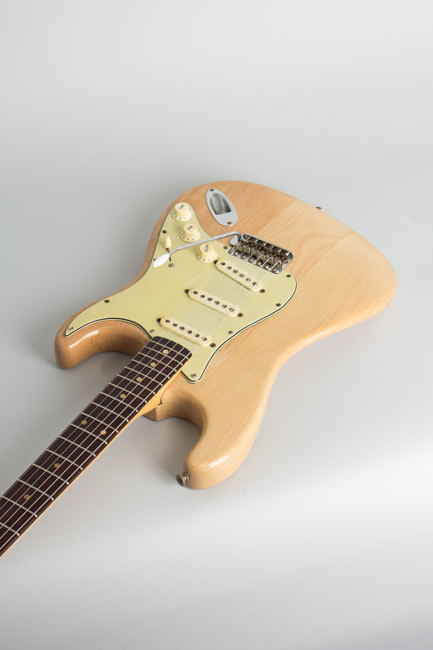 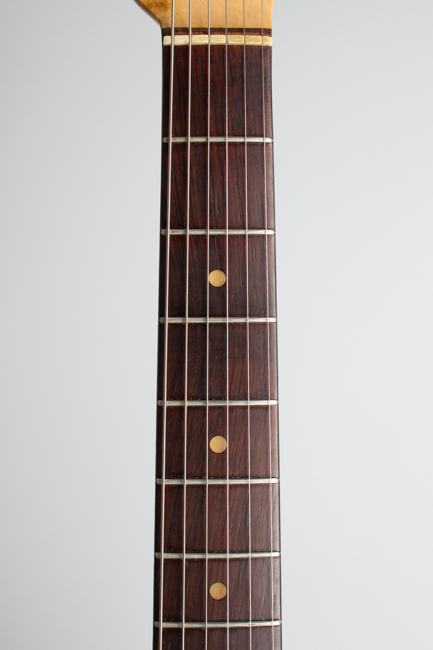 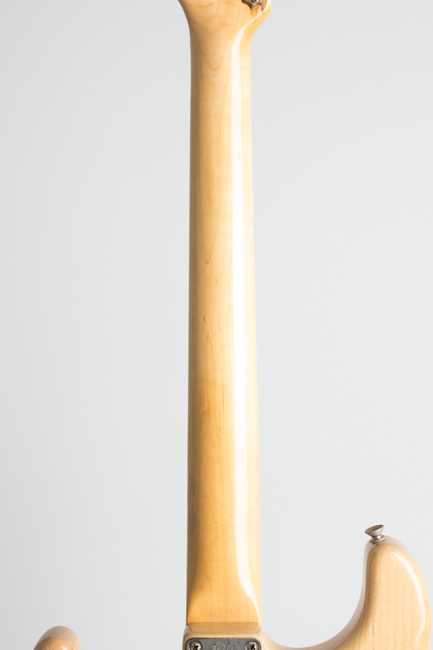 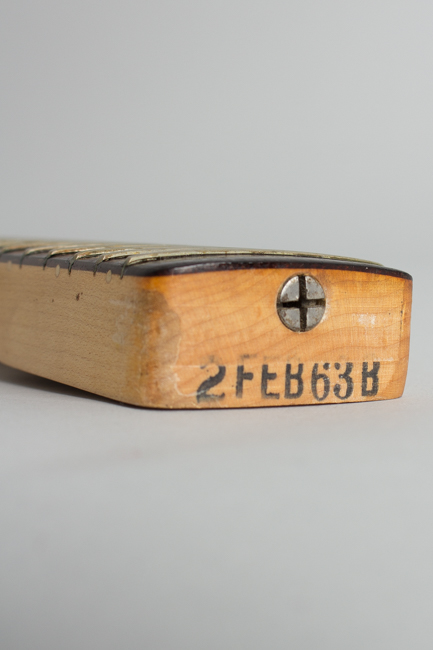 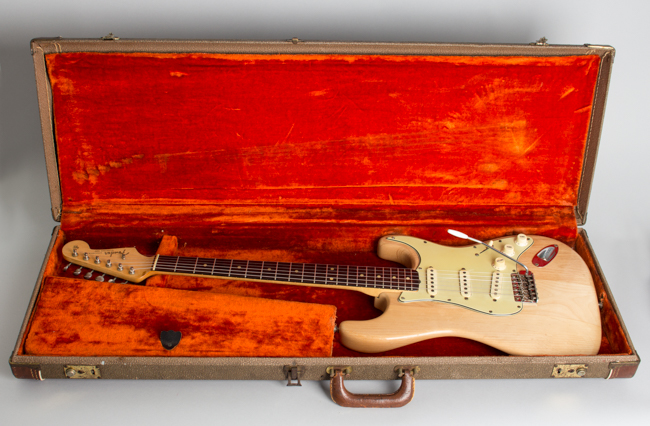 This is what today we call a classic "player's" early 1963 Fender Stratocaster, showing typical changes these guitars underwent with constant use, but fully restorable if desired. This guitar has had one owner since 1972, and although cosmetically altered from original condition, still retains much of its period character.

This would actually be a great template for a "dream" Stratocaster -- Sonic Blue with a matching headstock? Could be! As it stands, the finish was stripped long ago with a thin clearcoat added on both body and neck. Most of the fittings and hardware remain original, and there are no routs or alterations to the body. The neck has been refretted, but the wire is not overly large and it can be played as is or fretted again with a period correct, or indeed any other, wire without guilt! The headstock carries an early replica correct-style decal which again could be easily replaced.

This guitar started life as a typical sunburst Stratocaster with the standard appointments for the period. The rosewood fingerboard-faced neck is marked 2 FEB 63 B on the heel, indicating a fabrication date of the second month of 1963, with the typical "B" nut width. The body is dated 4-63 with a penciled marking inside the tremolo cavity, indicating it was finished out that month. Visible date codes on the potentiometers indicate they are from the sixth week of 1963 (6306); all components of the guitar carry closely related dates, indicating a likely assembly/sale in the first or second quarter of 1963. The neckplate carries one of the last original series pre-L series numbers, again typical of this period. The guitar still retains the remainder of the original finish sunburst finish in the pickup routes and trem cavity; there is residual black paint in the neck pocket indicating a probable "rattlecan" finish job before the natural refin.

All of the hardware remains original with a few minor exceptions. All of the pickups, pots, covers, switch, and wiring are original; the rig was re-soldered at the volume pot only during the refin process. The neck pickup output is somewhat weaker than the other two; this is increasingly an issue as these guitars age. It has output and is functional, but the sound is not all it should be and it would benefit from a coil repair or rewind; this can be easily arranged, but we have left it original for the moment.

The only electronic alteration is that the jack has been replaced, but the original is included. For some reason the screws holding the switch are not original, but appear to have been there a long time. The lovely "Green" nitrocellulose pickguard is original and in very good shape with no cracks and less shrinkage than many; most of the pickguard screws are original with a couple of later replacements.

The bridge plate and saddles are original; all of the saddle adjustment screws are later (the originals likely having rusted and become difficult to turn long ago). Currently there is a later correct vintage-style steel trem block mounted; the original block is included with the stub of the old arm broken off inside. This is another common Stratocaster malady and can be drilled out and restored if desired. Currently a later arm is mounted and the trem functions as intended. There is also a later back trem cavity cover included with a large rectangular restringing port.

Overall, this guitar shows some wear to the thin clear finish, which is worn away in some areas -- most notably a large spot of buckle wear on the back. The edges shows some chips and dings, and there is one spot on the face worn into the wood above the neck pickup, which was finished over. The neck finish shows very little wear by comparison. There is an old "classic" cigarette burn on the headstock adjacent to the low E string that was also finished over. The rosewood fingerboard has been planed and refretted without notable loss to the depth of the board or the original "clay" dot inlay. The fretwire is somewhat taller than the original 1960s-style Fender factory wire -- typical of 1970s work -- but not hugely oversize. This later refret job is of a good professional standard and shows just some light wear in the lower positions.

The other hardware on the instrument remain original including the Kluson Deluxe tuners, string tree, knobs, and switch tip. Overall, despite the various indignities it has suffered, this remains a highly coveted pre-CBS era Fender Stratocaster and a good-playing instrument, relatively easily restorable to an excellent professional standard. It is still housed in its well-worn original brown Tolex Fender case that remains quite functional. Overall Very Good + Condition.
×