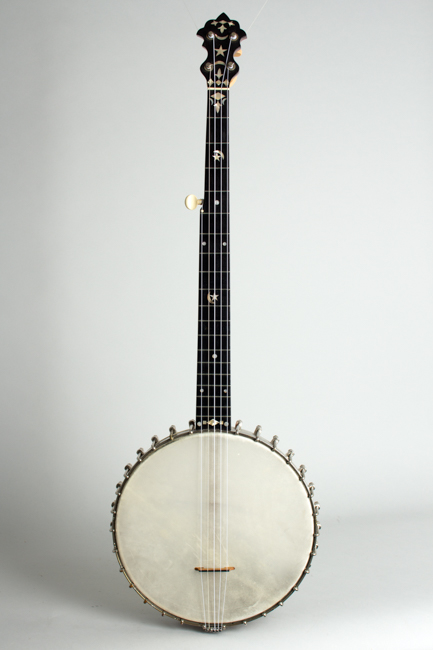 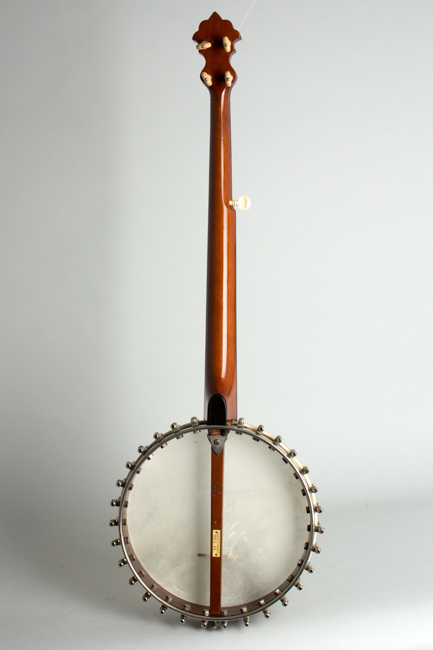 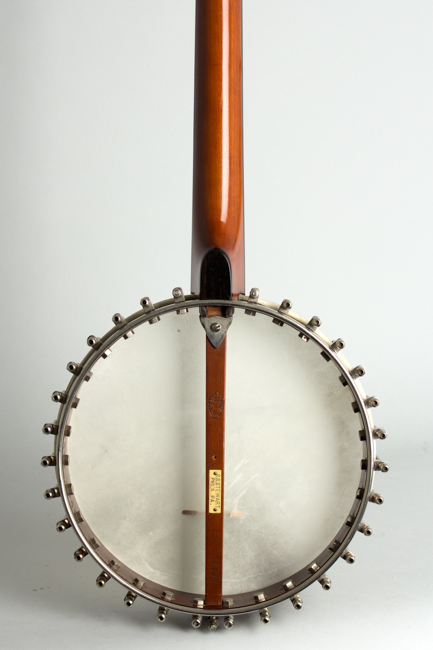 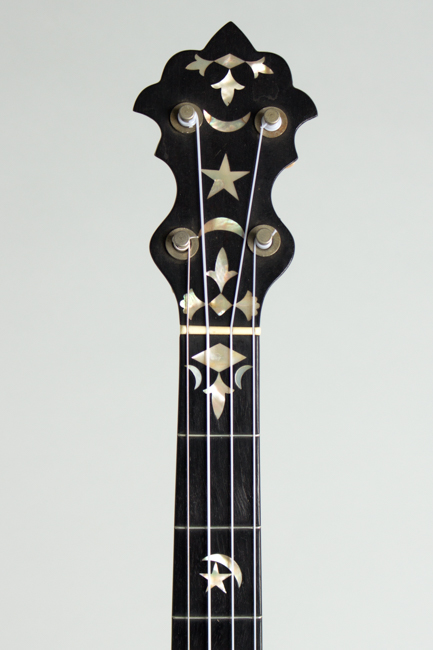 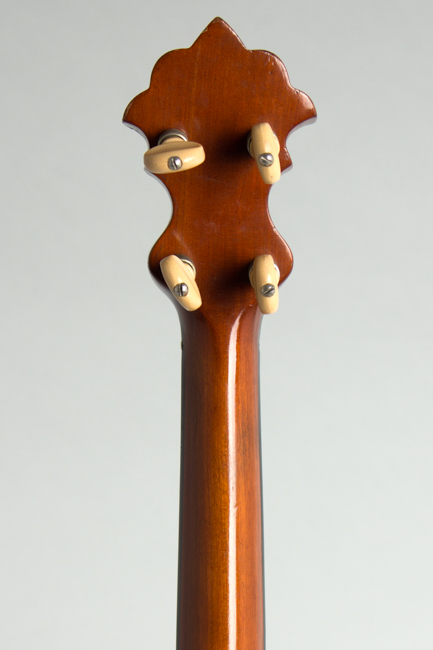 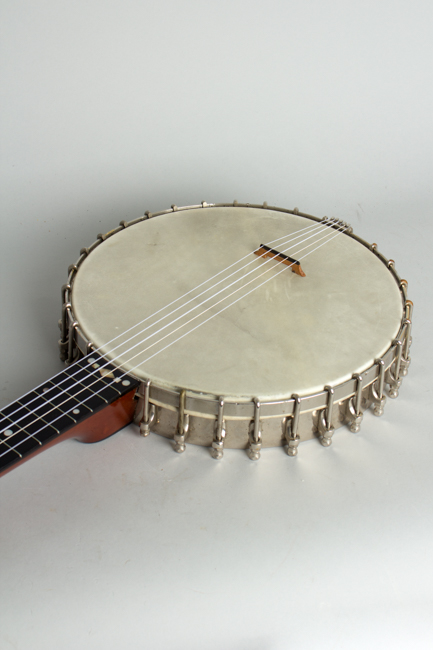 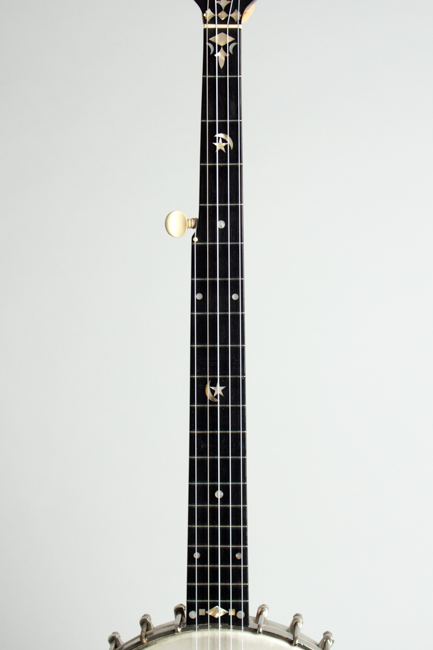 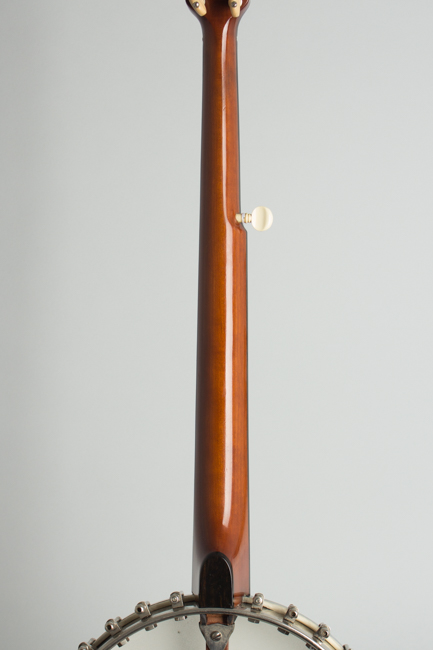 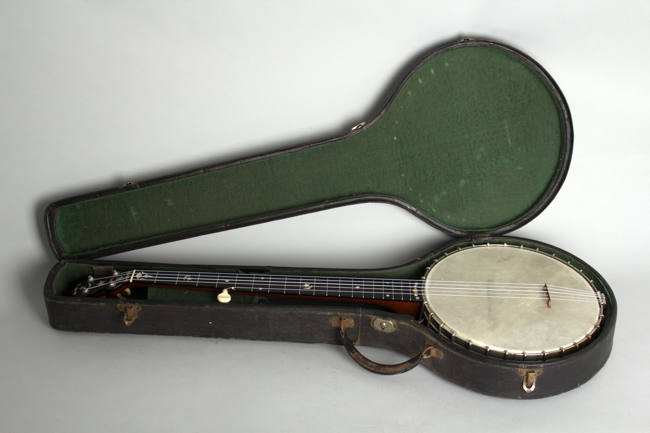 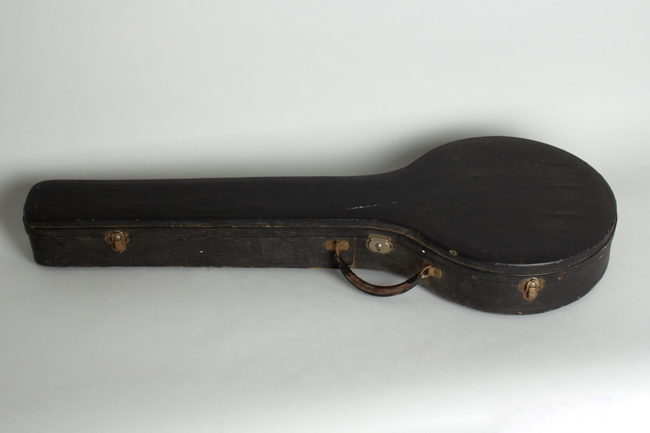 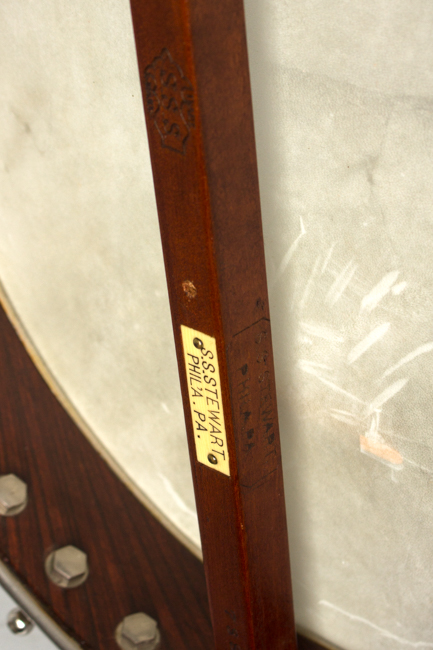 This instrument is an S.S. Stewart Champion #2 banjo, made around 1892 when the Philadelphia company was, at least by their own account, the world's greatest banjo maker. The Champion was a mid-line model, built around an 11 1/2" rim and standard 27" scale neck. The #2 Model can be identified by the 30 bracket rim and the moon-and-stars pearl inlay pattern on the fingerboard and headstock. The dowel stick carries an inlayed celluloid "S.S. Stewart, Phil'a PA" logo tag alongside an impressed "SSS" headstock-shaped logo.

The Champion #2 was listed at $35 around 1895, which was a midline price for Stewart but a considerable sum of money even in the Gilded Age. The Champion 31 had fewer brackets and less inlay for $30, while the #3 used the same rim but was somewhat more elaborately decked out at $50. Stewart were never at a loss promoting their wares; this model was "declared by nearly all purchasers to be FAR SUPERIOR to what is claimed for them, even much better than represented" and added "The tone of this instrument is fully warranted".

The banjo appears to have been refurbished sometime around the early 1920s; the internally sprung Grover friction tuners, cammed No-knot tailpiece, and a very fine hard case it resides in appear to date to that period. It is an amazingly clean survivor of the first golden era of the 5-string banjo, a true playable antique and a lovely example of S.S. Stewart's work.

This banjo remains in extremely fine condition for its age, now approaching 130 years old! The finish is amazingly clean overall, with minor dings and corrosion to the rim and very little wear to the neck and fingerboard. There is one small screw hole in the center of the dowel, for reasons lost to history. The hooks and nuts are mostly original with just a couple of substitutions that are period if not an exact match, and the plating has only minor losses.

The somewhat rare cammed No-Knot tailpiece dates to the early 20th century. This ingenious patented piece of hardware was not an original Stewart fitting but is prized by many banjo collectors by itself. The tuners on the headstock are early 1920s vintage Grovers, seen on Vega banjos of that period. The 5th string tuner is an 1890s ivoroid piece. It appears the last time this banjo was refitted was just shy of 100 years ago, and it does not look to have been played much either before or since.

This banjo, like all early Stewarts, was designed in an era when only gut strings were used on banjos. It is set up with a NylGut classical set and a calfskin head. We recommend tuning to a whole step or so below modern "G" tuning, which makes good use of the resonance of the larger rim and is appropriate for the time it was made. We would NOT recommend steel strings on this instrument; the cherry neck is not suited to that tension and many lovely old Stewart banjos have been effectively ruined in this way over the last 100 years. Taken as it is, this is a lovely period piece and a good playing and sounding banjo within its 19th century limits. It is accompanied by the superb high quality and well-fitted HSC probably purchased in the early 1920s. Excellent - Condition.
×