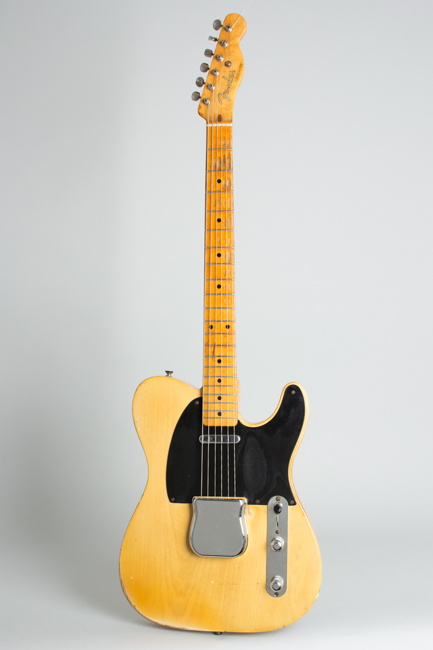 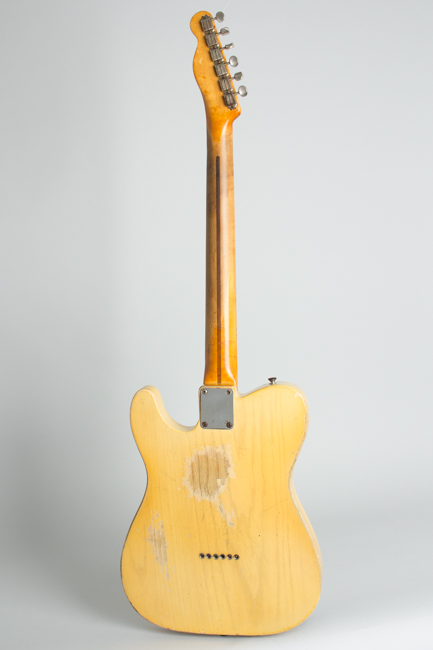 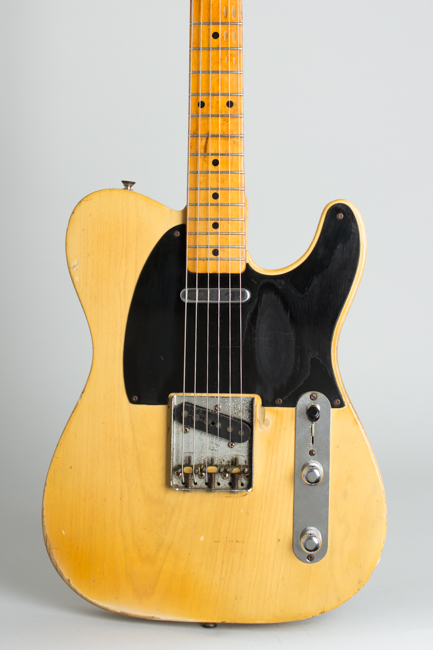 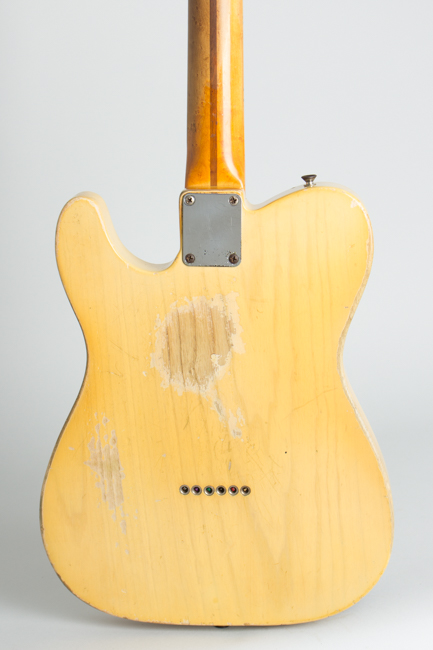 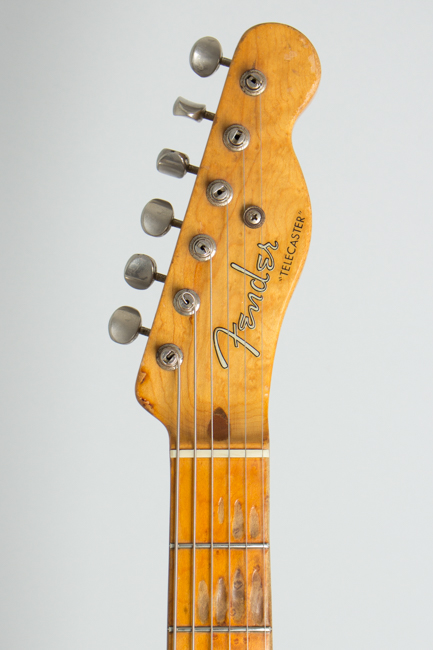 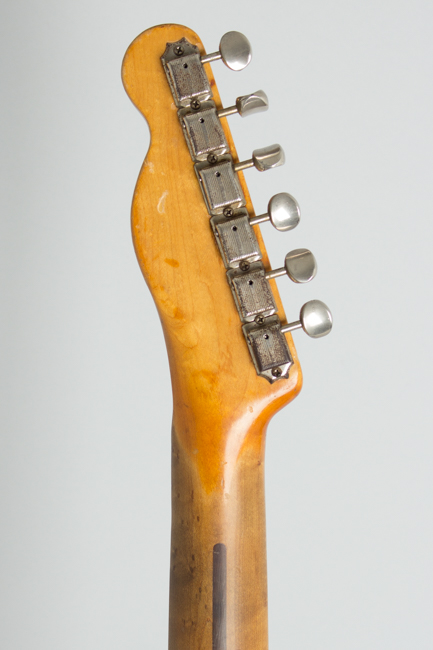 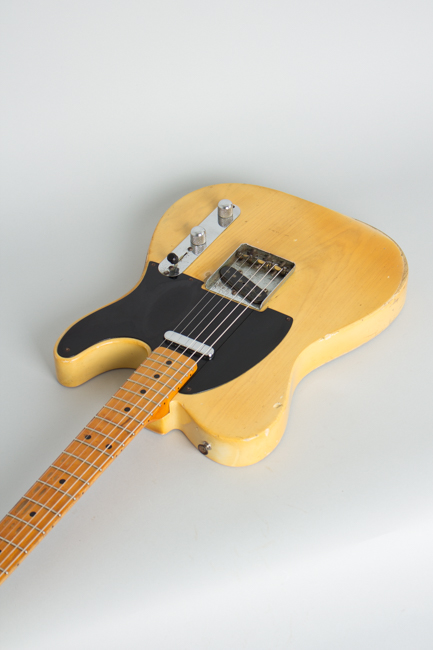 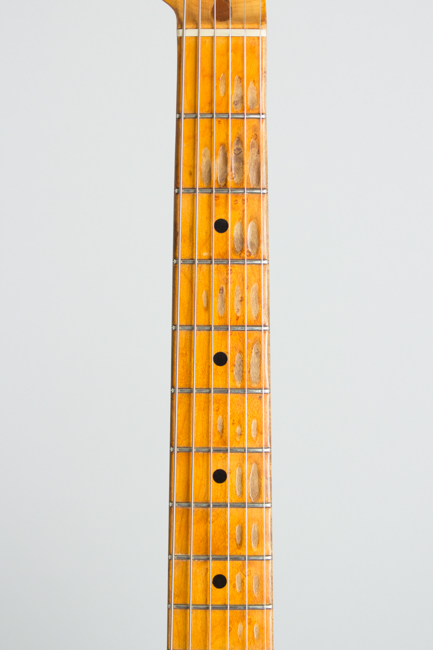 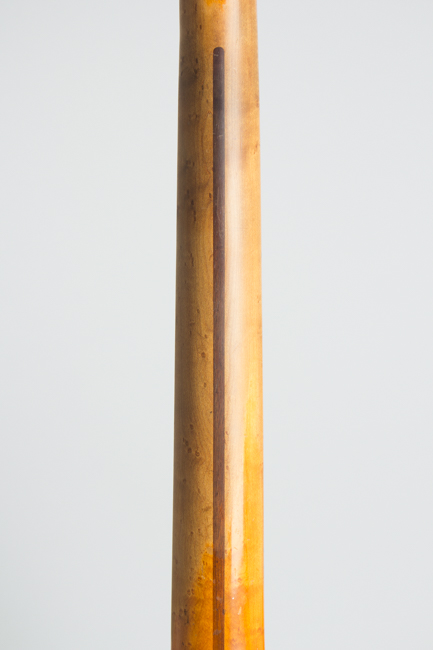 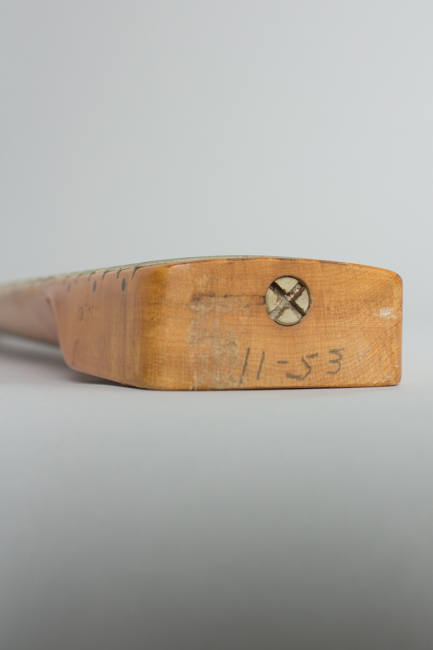 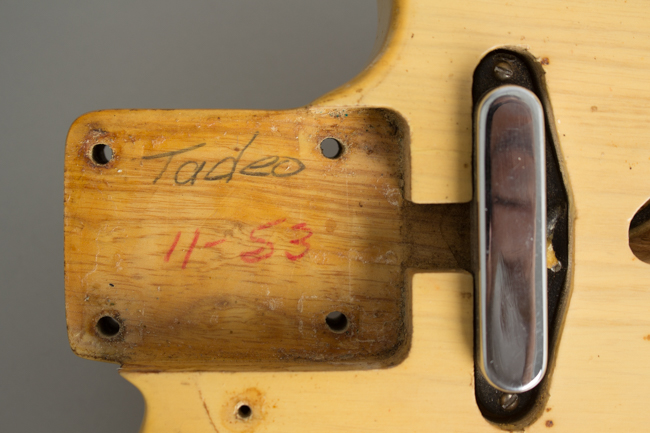 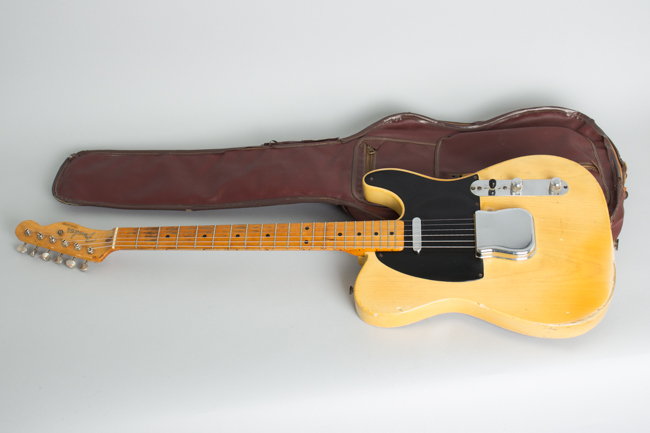 This beautiful "Blackguard" Fender Telecaster was assembled at the company's original factory in Fullerton, California right around the end of 1953. It carries a very consistent set of date markings, with the serial number 2188 stamped on the bridgeplate. The neck is dated 11-53 in pencil on the heel, while the body also carries a red-penciled date mark of the same month in the neck cavity, with the "Tadeo" signature above in grey pencil. The potentiometer date codes are 304-333 indicating the pieces were made the 33rd week of 1953. Mary wired this guitar up on 11-23-53 and left her masking tape signature in the control cavity, as she did on many other original Telecasters.

This guitar has been played but escaped many of the common modifictions early Fenders are prone to. The only alteration is the original electronics rig has been replaced with one wired to the "modern" Telecaster switching scheme to allow for more playing flexibility. The complete original rig (pots, caps, and switch) are in a baggie in the case pocket and the guitar can easily be restored to original if desired. This substitution is very common in Telecasters of this period, as they were originally wired with a bass capacitor in position #1 and no available pickup blend setting.

This exceptionally fine instrument is otherwise original except for a refret with appropriate wire and some associated overspray and polishing out to the fingerboard. The neck is fairly slim for a '53 and round backed, with some light burl figure visible in the maple. All screws are of the Phillips-head type as is customary for 1953. The '53 Telecaster still has the same look and feel of the earliest Fender guitars from 1950-51, although many of the fine details gradually evolved as the decade went along. This particular year is considered by many Fender aficionados as the peak of the company's early period and the apex of quality and consistency for their first Spanish guitar, before the introduction of the second Fender solidbody, the Stratocaster.

Many of the artists most associated with "blackguard" Teles have used examples from this year including Roy Buchanan, Danny Gatton, James Burton, Keith Richards, Albert Lee, and Red Volkaert. The "butterscotch" blonde ash body and maple neck are subtly changed from the earlier examples, with the neck profile being slightly sleeker than "Broadcaster" standards and the finish having a slight halo effect around the edges.

Many players and collectors consider the 1953 Telecaster the most desirable example of the model. In his authoritative and beautiful book "The Blackguard" author Nachos Banos references this and states "There is something really magical about these mid-'53 butterscotch finishes". Early Fender Telecasters of this period are considered one of the most collectable and historic of all electric guitars, and this is a very fine and playable example.

The instrument remains in well-played but nicely preserved condition with some typical wear but no major alterations from its original state. The guitar shows signs of use in the past, but the finish is unaltered and overall is not heavily worn. The original blonde lacquer shows a number of dings and chips overall (mostly to the body edges) but it is not heavily discolored, worn away, or abused. There is only minimal "smoke" darkening of the finish overall, more noticeable on the neck which is worn down to the wood on much of the back surface.

There is visible play wear through the finish on a good part of the lacquered maple fingerboard; again, typical of Fenders from this early period. There was a small "classic" cigarette burn on the headstock edge by the low "E" tuner and a small amount of lacquer has been chipped off a bit there. The pickguard shows some wear through the lacquer where the strumming hand impacted over the years. There is a fairly worn spot to the lacquered guard just below the treble side of the strings, and a few deep scratches across its face.

The pickups, bridge components, lacquered fiber pickguard, strap buttons, and all screws and other hardware are original. The original Kluson Deluxe tuners are still intact and funtional and no other tuners have ever been mounted. As noted the original pots, switch, and caps are not currently mounted but included. This allows the guitar to be played in "Modern" wiring scheme that allows blending of the pickups, but the stock rig has been preserved intact and can be re-installed if desired. The jack and pickup leads retain the original cloth wire.

The neck has had a well-done refret some time ago and the fingerboard was oversprayed at the time. There is no other finish work visible. These frets still have a decent amount of life in them, and the guitar is just heaven to play. The instrument is accompanied by its original plasti-leather gig bag but that is in a semi-functional state; the zippers still work but some stitching is pulled out and the the handle not attached. It is also accompanied by a very nice reproduction Fender 1952 style shaped hard case. We love blackguard Teles more than just about anything else with strings and this is a wonderful example, used but not abused with vibe for days. Excellent - Condition.
×