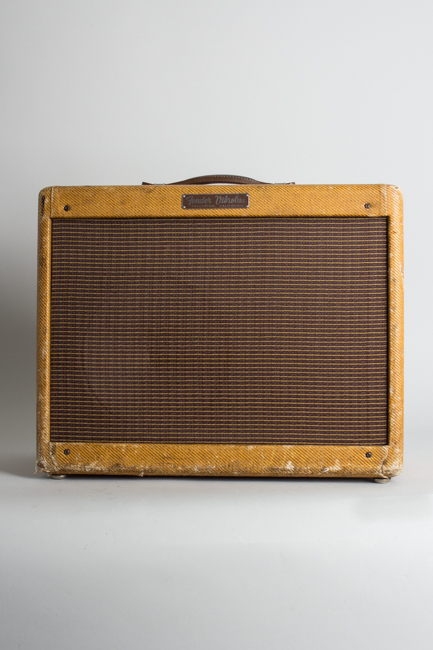 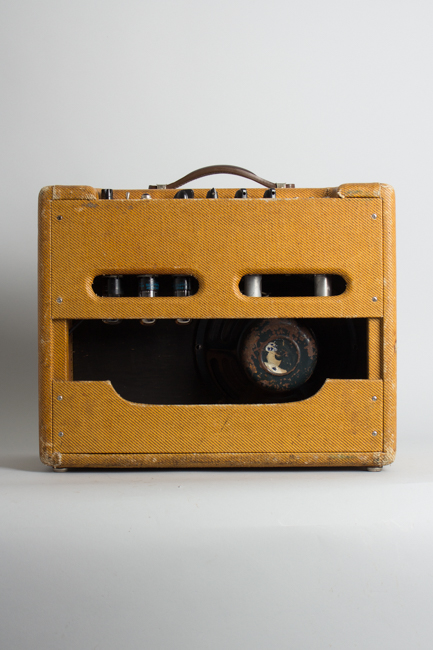 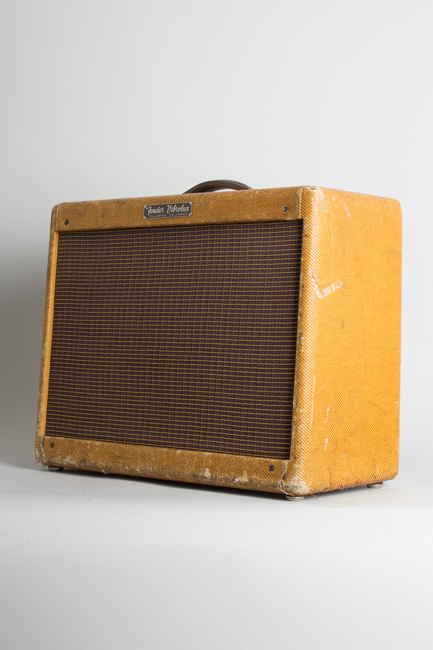 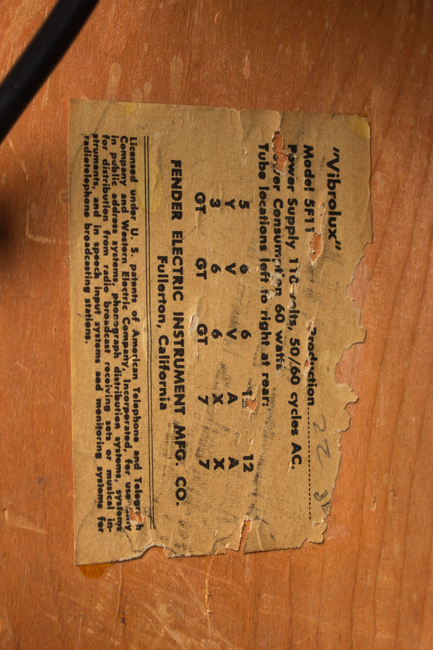 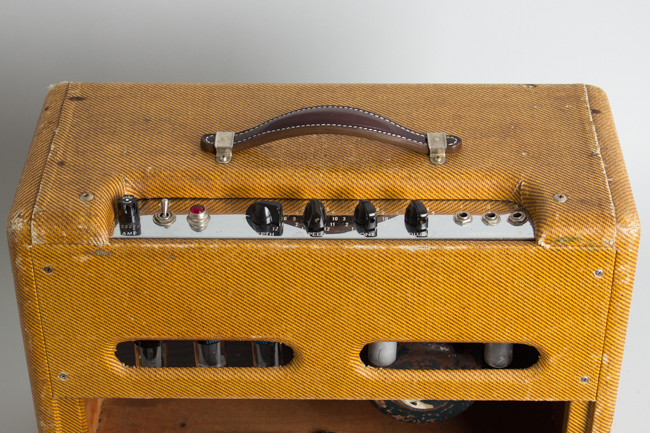 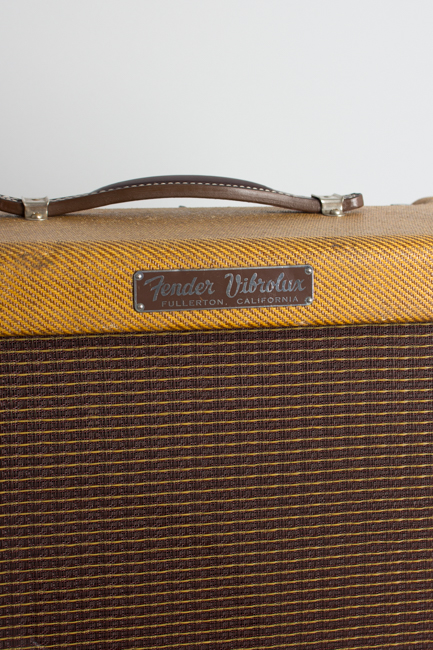 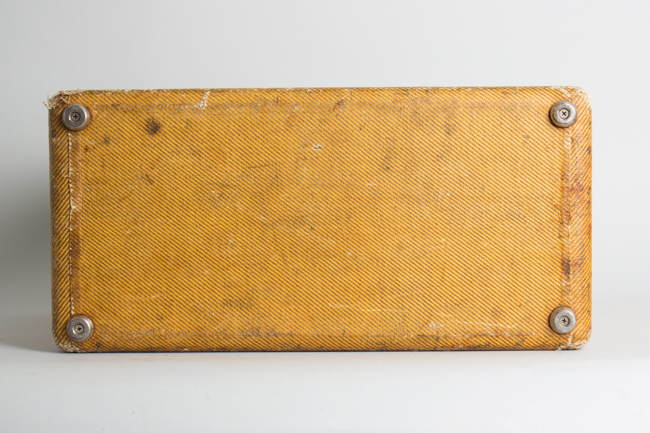 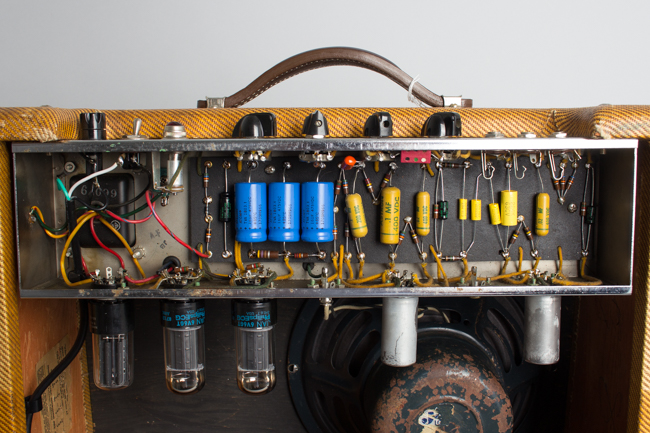 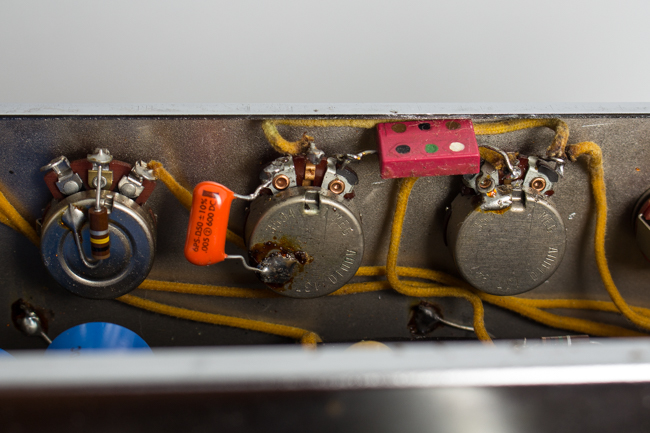 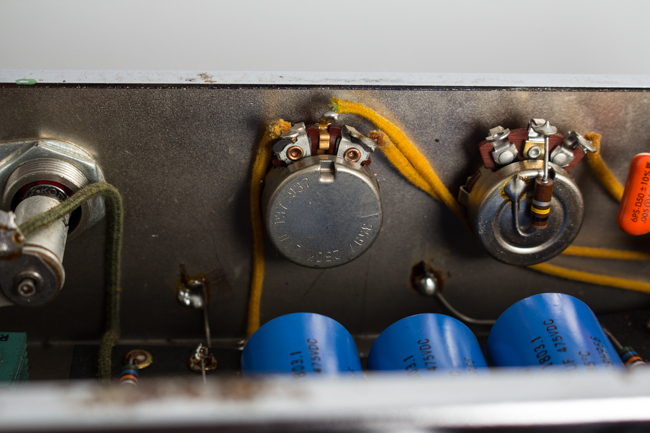 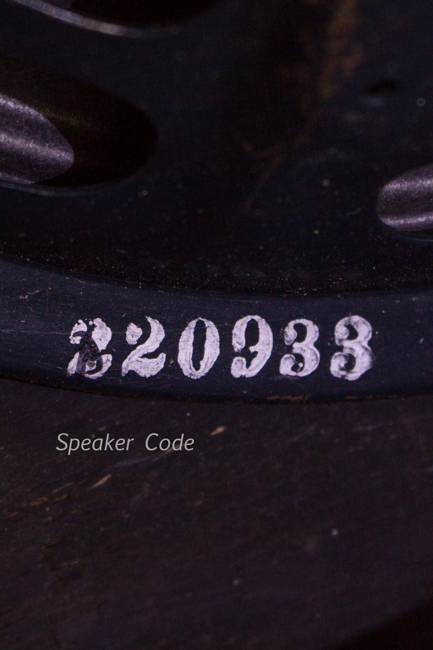 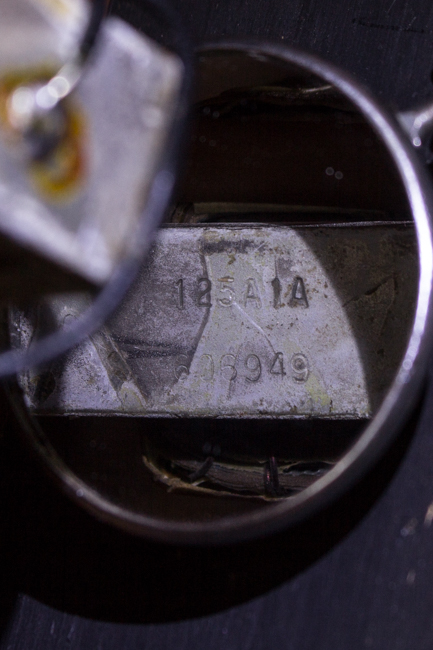 The 1950s tweed Vibrolux is a very different animal than its more common Tolex-era descendant -- this example from 1960 would be one of the last ones made before the complete re-design took over. The original 10" Jensen speaker has a stamped code 220 933, the pot codes are 137-937 and 947 all indicating manufacture in 1959, while the Fender Tube chart code is partially missing visibly reading J* (B, D or E) indicating assembly sometime in early 1960, wired up by Lupe.

This version of the Vibrolux is still a relatively compact combo amp with one 10" speaker putting out about 10 watts. The circuit is basically the same as the tweed Harvard with a tremolo feature added, on introduction in 1956 this was the smallest Fender amp with built-in tremolo. Unlike the 6AT6/6AV6 first stage found in the Harvard, the Vibrolux uses the dual-triode 12AX7, with the added half powering the tremolo. The rest of the circuit is virtually identical.

Also like the Harvard, and unlike many other contemporary Tweed models like the Deluxe, the Vibrolux is a fixed-bias amp, allowing it to have surprisingly high headroom and volume for a dual 6V6 layout. This original Vibrolux was on the edge of the student/professional grade amp dividing line in the 1950s but offers plenty of volume for most small gigging and recording situations today, with a tone that's hard to beat.

This amp has some general wear externally to the tweed covering including some fraying around the base and a couple of "classic" cigarette burns on the top. The control plate is relatively clean with a slight bend around the far-right jack, where a cord must have taken a hit long ago. The handle is a new high-grade repro. The original Jensen has some flaking and corrosion to the frame paint but still sounds great.

Internally the amp remains largely original with some recent maintenance service including a new grounded power cord, replaced selenium diode, and recapping all electrolytics. The "Vibro" effect has been strengthened tremolo by replacing the tremolo circuit caps. This is a great-sounding amp; a lower-power monster that goes from sweet to growl quickly and smoothly. Excellent - Condition.
×