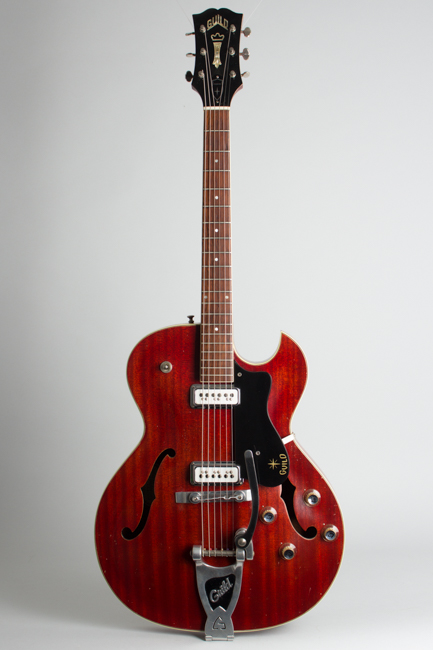 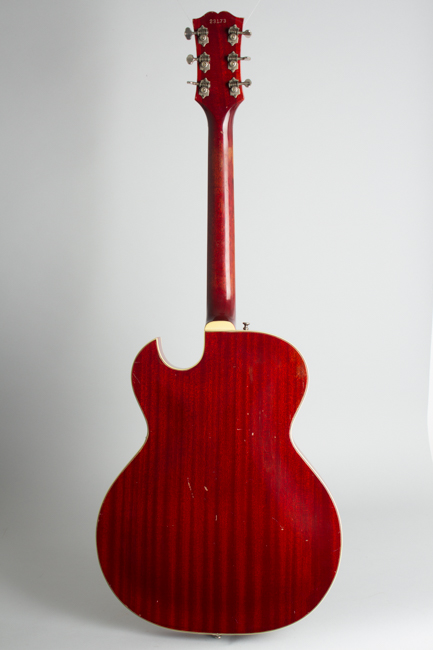 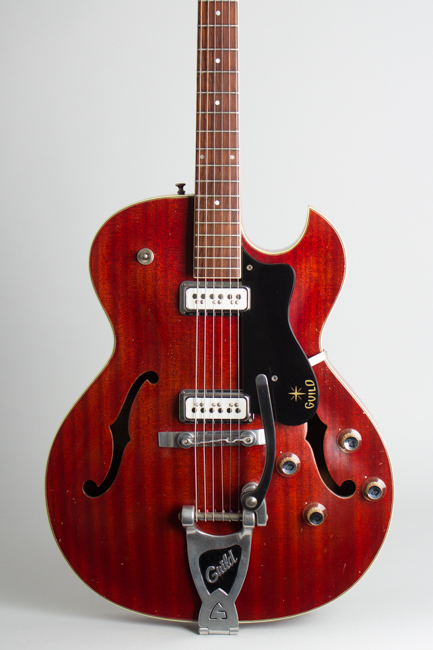 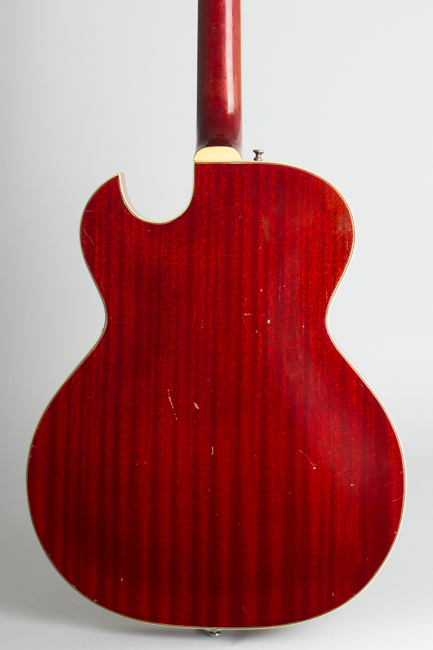 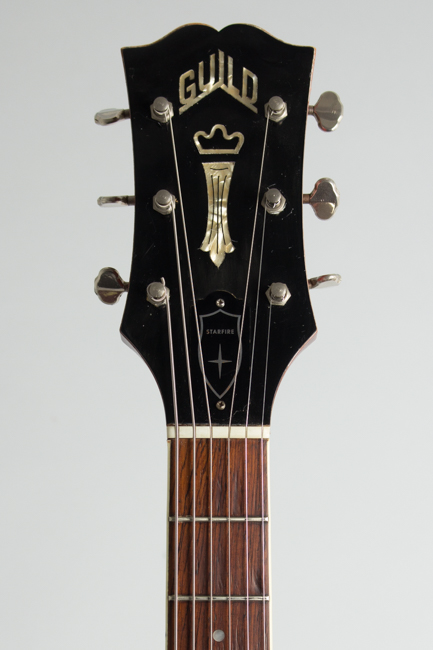 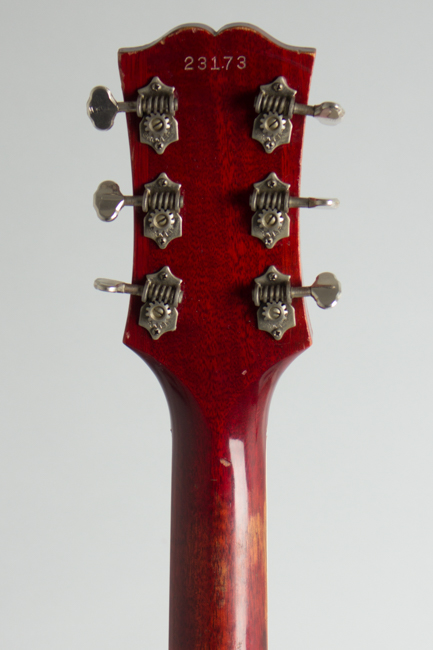 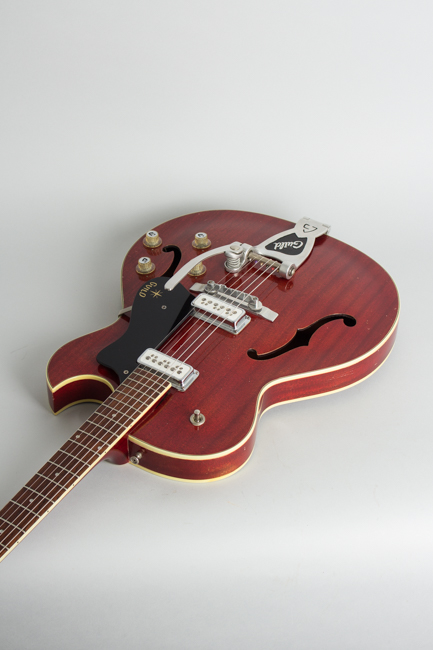 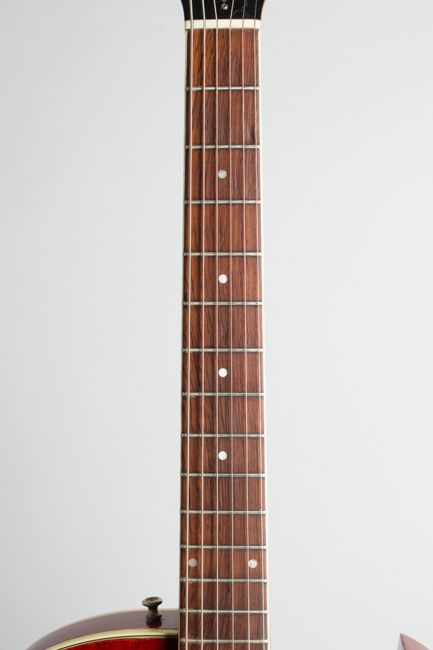 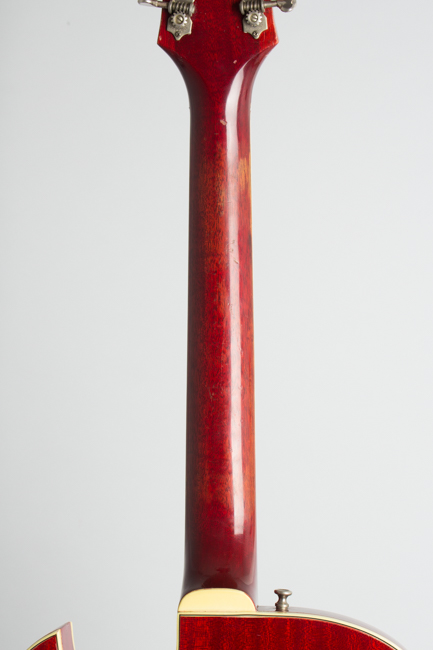 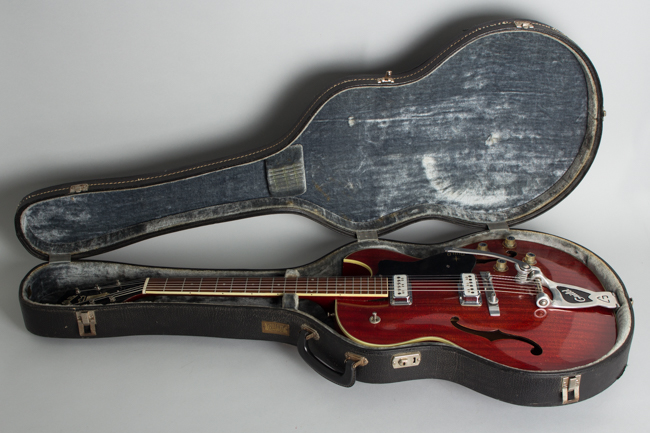 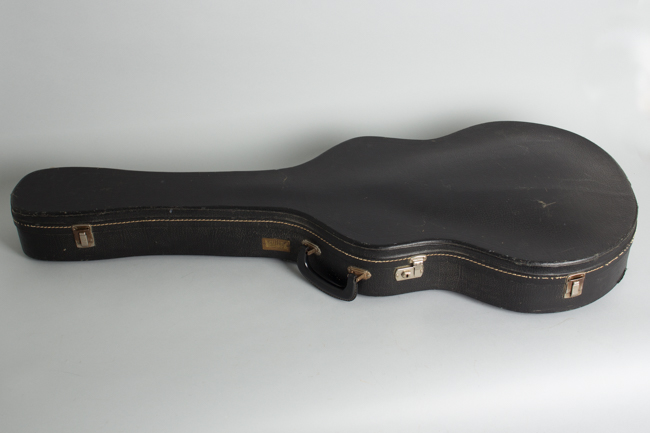 This is a very nice example of an earlier Guild Starfire III, the original "top of the line" of this long-running electric guitar series. The thin hollow and semi-hollow body Starfires have been Guild's most consistently successful electrics since their introduction, and earlier 1960s models are the finest of their type. This guitar dates to the beginning of 1963...the original Starfire models I and II had been introduced in summer 1960. The Starfire III was added slightly later, the same thinline, single cutaway, double pickup guitar as the Model II with the addition of a Bigsby vibrato tailpiece and bridge and the most expensive of the series at the time.

This guitar mounts a pair of white-topped DeArmond pickups, the same units Gretsch famously used in the 1950s except for the differently colored plastic faceplate. The Starfire models featured these pickups up into mid-1963 when Guild substituted their own new humbucking units, so this would be a late example of a guitar so equipped. The pickguard is also the earlier style rounded-edge back-painted Lucite piece with a Guild logo and star emblem. Other fittings include individual Grover Sta-Tite openback tuners, transparent amber "G-logo" knobs and the proprietary Guild logo harp-shaped Bigsby introduced in 1961. The truss rod cover on the early "open-book" style headstock is a metal plate with the Starfire logo. The medium dark cherry finish body is faced with mahogany, with a triple-bound front but unbound on the back. The mahogany neck has a single-bound, dot inlaid rosewood fingerboard.

The Starfire III is a great '60s rock and roll guitar from the "Beat Boom" era, one of the classic American guitars of the period. This model was extensively used by many mid-1960s groups including the Kinks, Beau Brummels, Music Machine, Dakotas, and many more, and was Guild's defining professional grade electric guitar. This is a very classy and versatile thin-body electric; with the DeArmond pickups the sound is comparable to many 1950s Gretsch models and compared to these and similar vintage Gibsons, the Starfire remains something of a "sleeper" guitar.

This is a relatively clean and all-original example with just some typical light play wear. The finish shows dings to the top and back, but no major loss. The back of the neck is worn down somewhat from play and has small dings as well. The headstock facing has shrunk up a bit (as is typical) and been reglued at its top edge. The frets have been taken down a bit in the lower positions and there are a couple of small fingerboard divots but the guitar still plays well. The binding shows virtually no shrinkage. Overall a very nice package of 1963 pre-Beatle goodness including the original Guild-marked HSC. Excellent Condition.
×