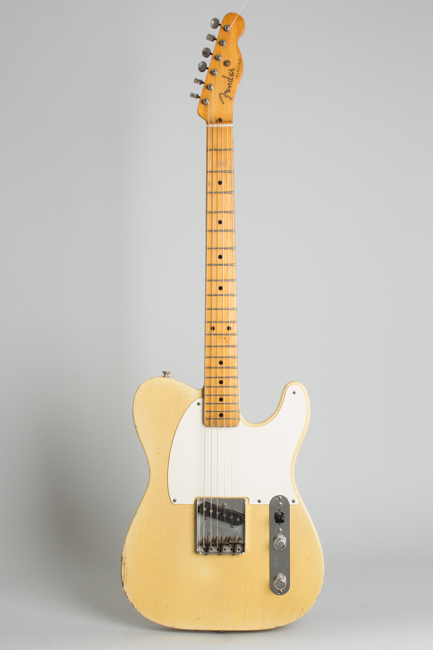 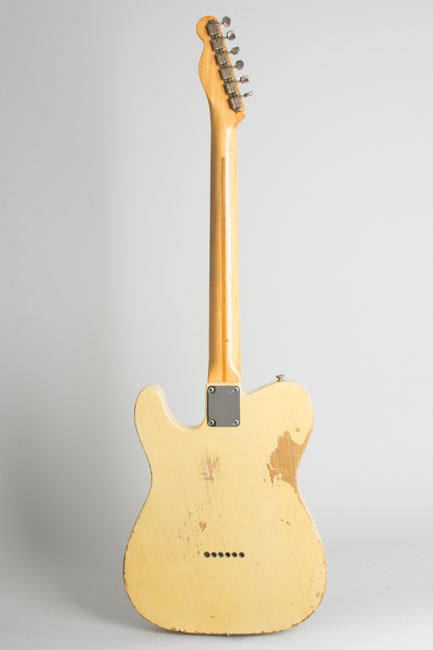 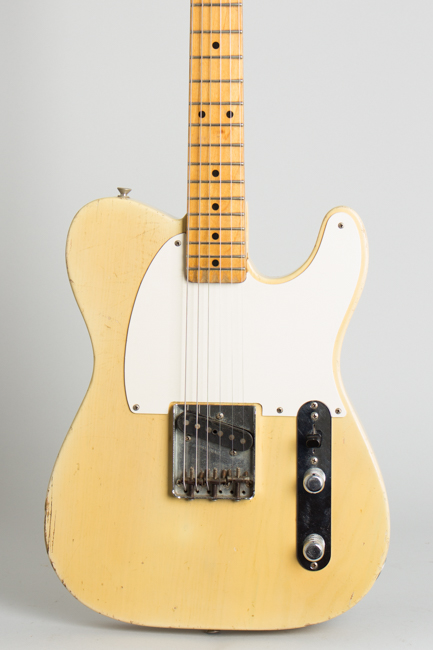 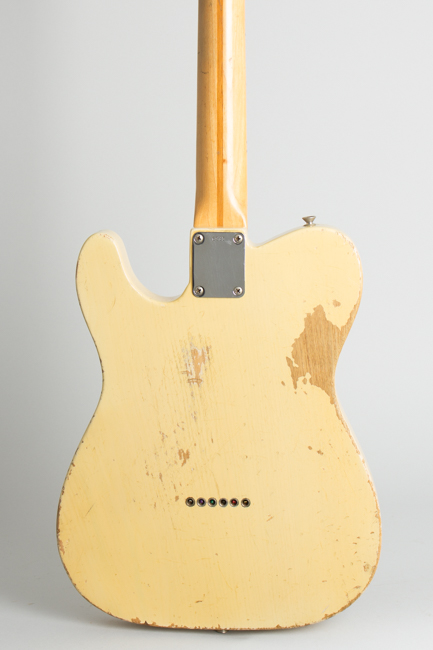 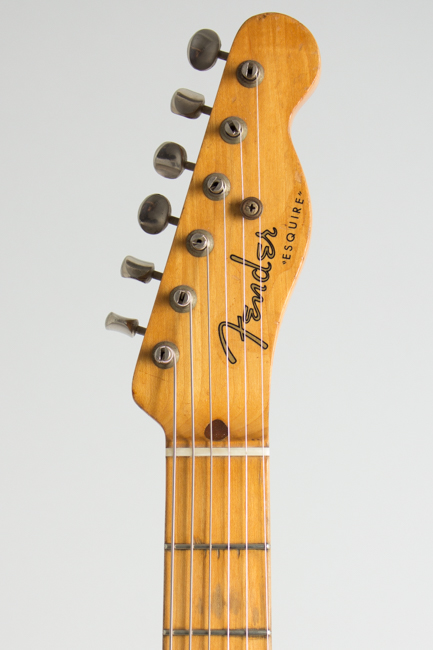 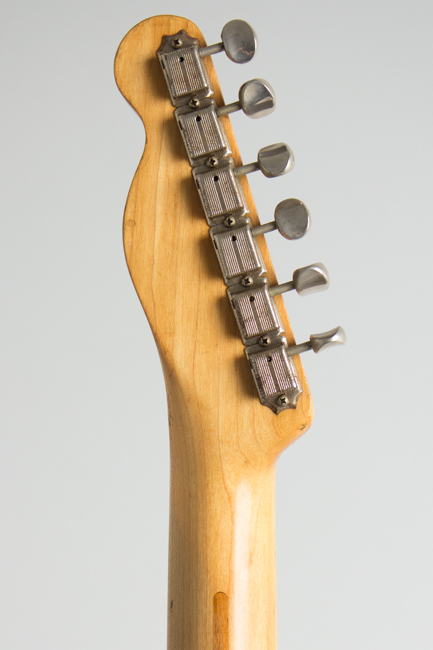 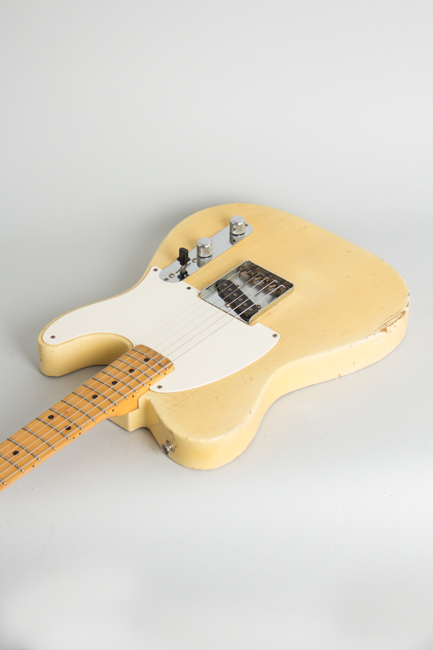 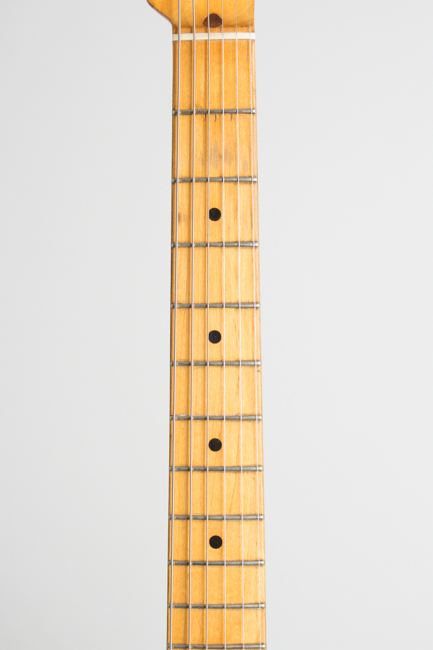 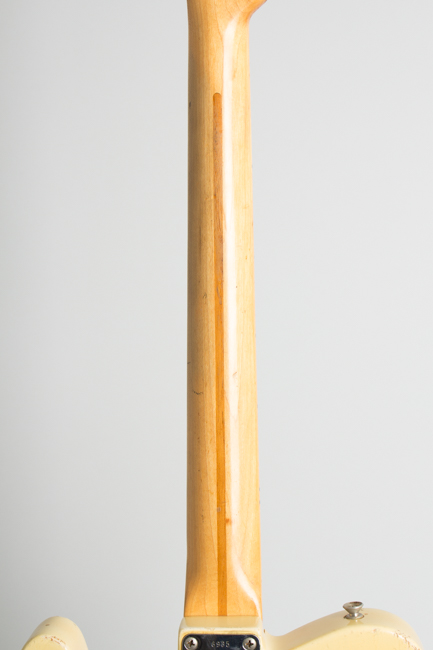 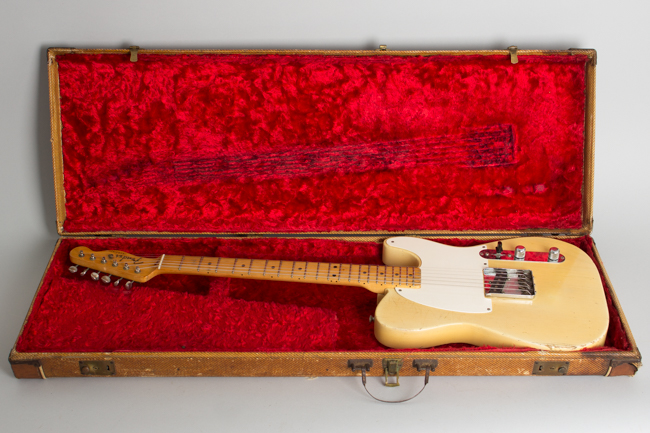 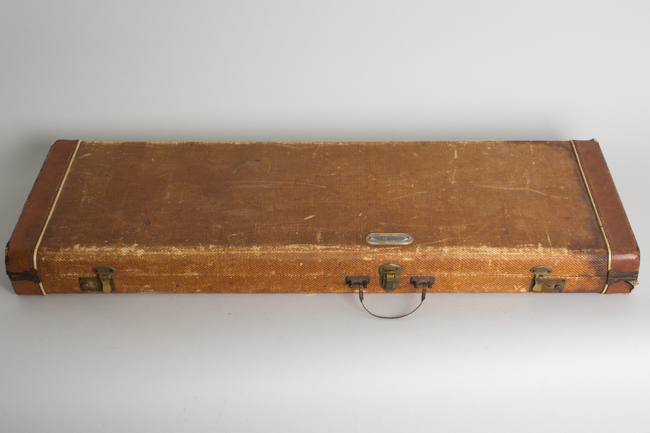 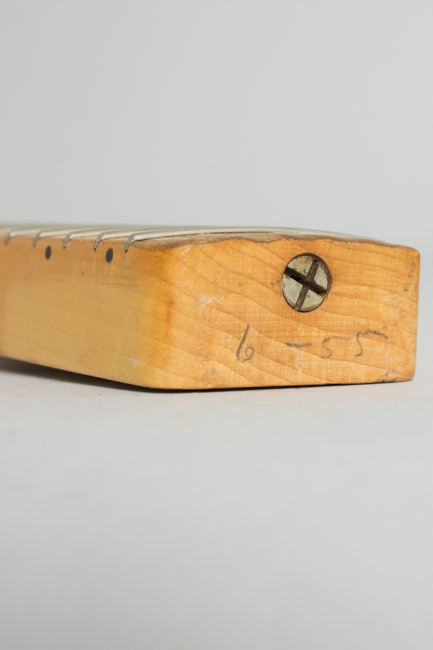 This is a lovely second-generation "whiteguard" Esquire, a superb example of 1950s Fender greatness and an extremely fine-sounding guitar. The Esquire was cataloged as a separate model but was really just a single-pickup Telecaster, which allowed Fender sales to offer a slightly cheaper alternative for the buyer who couldn't quite spring for the Tele's $189.50 pricetag. This one is one of the early versions of the newer "whiteguard" Fenders and shows typical features for this period including the single-ply white plastic pickguard (standard by 1955, replacing the earlier black phenolic) and the old script Fender logo decal above the original-style round-style string tree.

The grainy ash body has a slightly yellowed blonde finish, not as dark as the earlier '50s style but more transparent than the early 1960s "white-blonde". The body is dated 5-55 in the neck cavity, and there is a script "esq" penciled on the body under the pickguard. The neck is dated 6-55 with a very chunky profile that shows the beginnings of the "V" that became more prominent in 1957. The serial number now stamped on the neck plate is still the older 4-digit series.

The single flat-pole pickup back at the bridge is still in "blackguard" territory sonically. It is controlled by a volume, tone, and 3-way switch with a "top hat" tip offering three tonal options: the #1 bass-heavy rolloff setting, the #2 straight tone control, and #3 "bypass" sending the signal straight to the jack. This last setting is the Esquire's secret bonus, offering some of the finest, snarliest tones ever to emerge from the Fullerton factory. This one was wired up by Mary on 6-17-55, and her masking tape tag is still intact in the cavity.

This early "Whiteguard" is a fantastic-sounding guitar, a joy to play...even to just hold! As used by Paul Burlison with the Johnny Burnette Trio, and many other early rock'n'roll and country players. It still resides in a very battered original early-version side-pocket tweed HSC, which has a cool old plastic music store plaque pinned over the handle.

Overall this is a nicely original guitar, with only an old refret keeping it from being 100% unaltered. The body and neck finish show some typical wear with small dings, scratches and scuffs, and one deep dent to the body edge on the top in the armwear area. The upper back has one large area of belt buckle wear and there is another smaller patch below. The neck finish has fairly light wear to the back, through to the wood on the treble side in the lower positions. The only notable fingerboard wear is in the "cowboy chord" zone and at the bottom end, where somebody strummed long ago.

All hardware on the instrument is original including the tuners, pickup, wiring, knobs, and bridge components. The pickguard is also original and quite well-preserved with some light scratching on the top surface. Oddly the neck pickup cavity does show two small screwholes from where a pickup would have been installed; the instrument shows no other signs of this having ever happened, and the Esquire-specific electronics appear undisturbed. This is likely either a factory error, or someone started to add a neck pickup then (thankfully) decided against it. At any rate, this is an invisible oddity.

The fretwork is very good although the removal of the original frets long ago left some scars on the maple fingerboard, most notable by the first and last frets. The wire is a bit larger than '50s standard in both width and height but not in oversize jumbo territory. The guitar plays and sounds fantastic and overall is one of the nicer early "Whiteguards" we have had, a twang machine par excellence. The original case is pretty well-worn but still functional, with a new handle. Very Good + Condition.
×