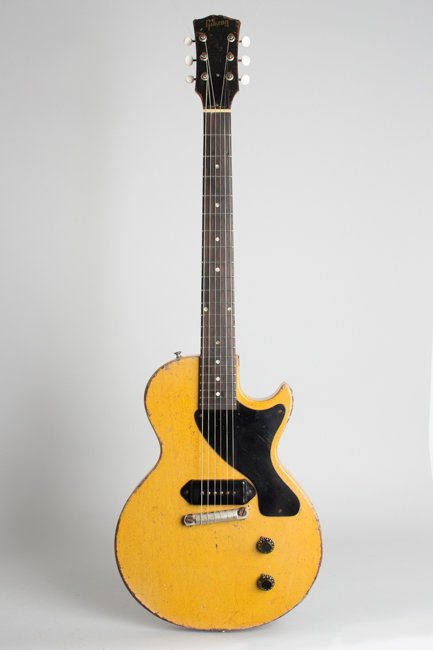 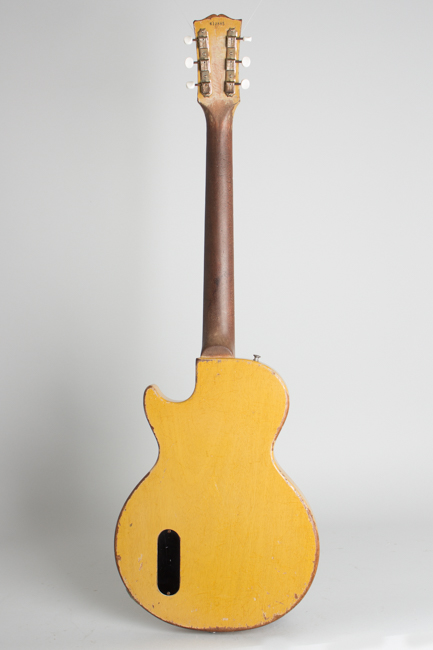 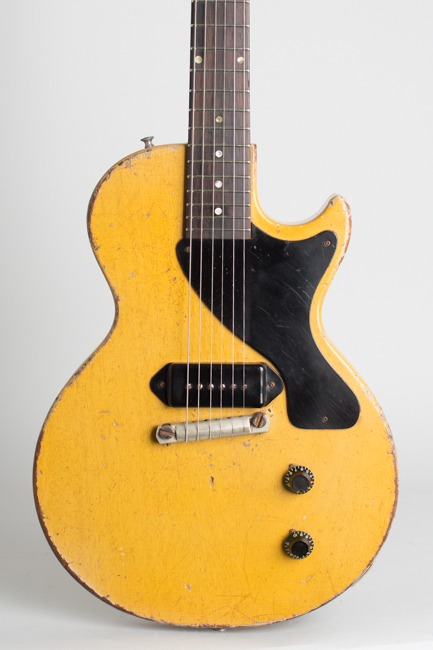 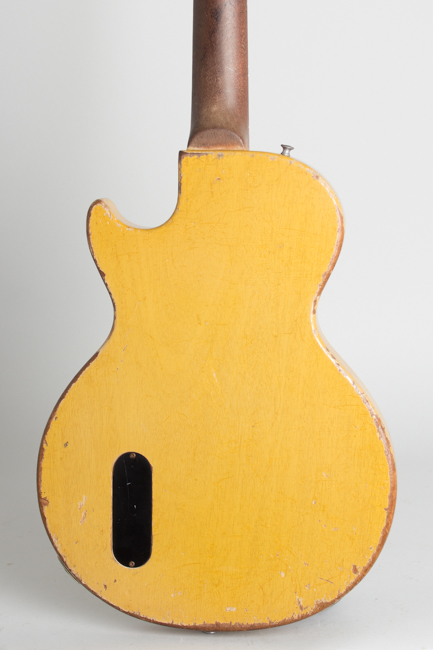 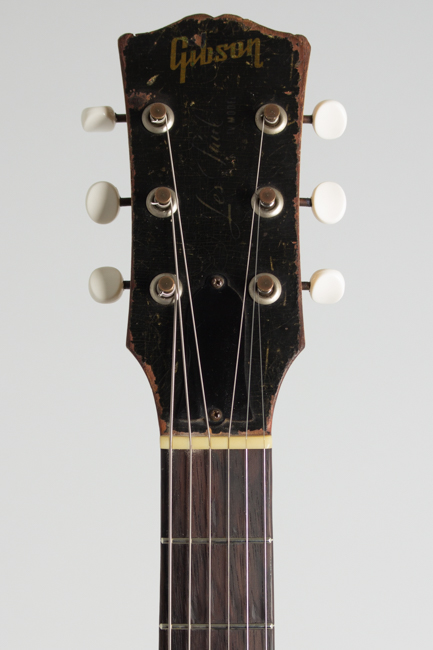 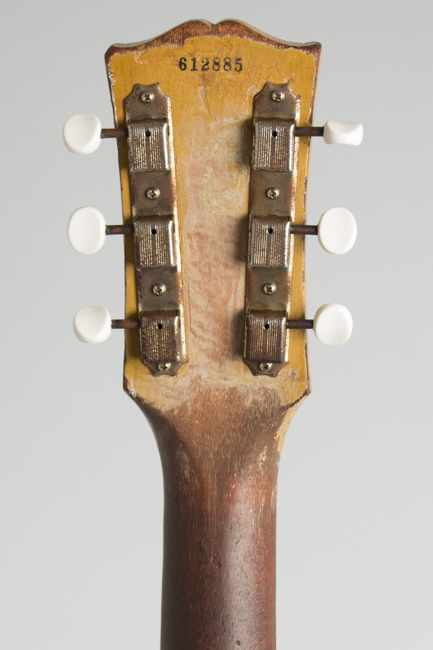 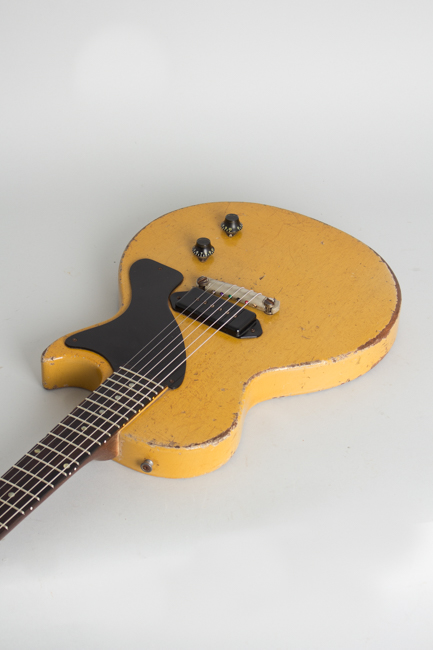 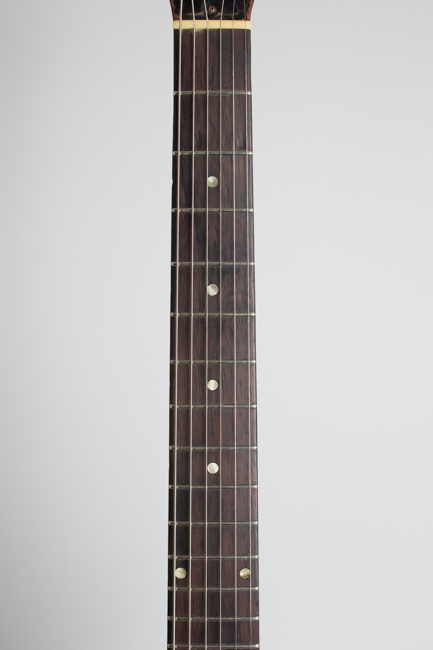 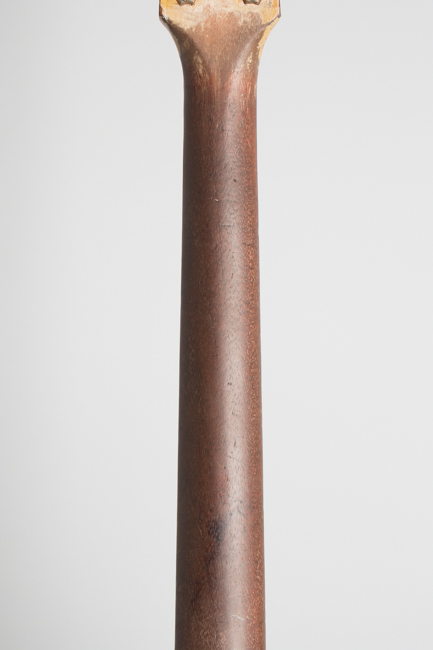 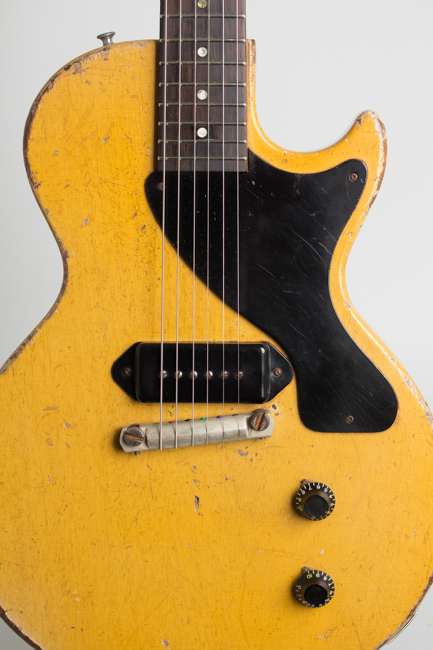 This is a great-sounding if rather well-worn example of a 1956 Les Paul "TV Model", a variation on the classic '50s solid-body LP Junior. It features a fairly lightweight (just under 7LBs) mahogany body and a single, very punchy P-90 pickup. The "TV" is structurally the same as the Les Paul Junior, distinguished by a lighter "limed mahogany" finish on the body and neck instead of a dark sunburst and a "Les Paul TV Model" silkscreen on the headstock. This variant is quite a bit rarer than the standard sunburst version -- only 511 TV Models shipped in 1956 compared to over 3,100 of the standard sunburst Juniors.

The "TV" designation supposedly refers to the increased visibility the light-finished guitar would offer on the flickering monochrome sets of the day. It seems a bit odd though, as this was marketed as a student model. Who might actually be seen playing it on television is an open question; maybe on the Major Bowes Amateur Hour…?

The neck on this one has a typical round-backed '56 profile; the finish has been sanded off the back but the contour not substantially altered. The P-90 pickup is mounted under the "dogear" plastic cover close to the strings, giving it a very powerful output. The wiring is completely untouched including the now-venerated "Bumblebee" tone cap, and the black numbered knobs typical of the late '50s. The tuners are strip Kluson Deluxes, and the designation "Les Paul TV Model" is stenciled on the headstock under the Gibson logo.

As the name implies, the Junior was the most basic of Gibson's 1950s Les Paul line, with a single pickup, tone and volume knobs, and simple bar bridge/tailpiece. This lack of complexity has stood it in good stead in the 1950s and beyond. While designed as a student guitar, the Junior has become justly renowned as one of the crunchiest and most powerful of straight rock guitars, with fantastic natural overdrive capabilities when paired with the right amp. The combination of the solid, thick mahogany body and neck with the single solidly mounted P-90 and bar bridge maximizes tonal response.

Many players prefer this model to all others for both crunch rhythm and searing lead. From Leslie West to Mick Ralphs, and Johnny Thunders to Paul Westerberg to Billie Joe Armstrong, Gibson's original 1950s Les Paul Junior and TV models has proven itself over and over to be the most basic of rock machines, as simple and effective as they come.

Overall length is 39 in. (99.1 cm.), 13 in. (33 cm.) wide at lower bout, and 1 11/16 in. (4.3 cm.) in depth, measured at side of rim. Scale length is 24 3/4 in. (629 mm.). Width of nut is 1 11/16 in. (43 mm.). This guitar shows fairly heavy wear all over, though the face is actually free of major finish loss there are dings, dents and scrapes everywhere. The body edges have a decent amount of finish worn away, but the back is cleaner than one might expect. The back of the neck has been sanded down to the bare wood but not substantially re-shaped in the process. It does feel just a bit slimmer than it likely once did, and there are some soft dents in the surface.

Whoever did this sanding project long ago thankfully stopped when they got halfway up the back of the headstock, so the serial number is undisturbed. The center of the headstock rear between the tuner strips is a sort of no-mans land of partially wet sanded finish. The peghead face is not affected; the Les Paul TV markings are intact if very faded and the edges show substantial wear. The tuners are the original Kluson Deluxe strips with new buttons.

The pickup and electronics are original and undisturbed; the original plastic jackplate somehow survived with an added washer to secure a widened hole at the center. The bridge/tailpiece is a high grade modern repro on the original studs; the original is included but broken at one end. It has been refretted and the fingerboard trued, making for a fantastic playing instrument that wears its scars proudly. The sound is rip-roaring as expected and this is a real relic of a '50's Gibson that will be rocking on for decades to come! Incudes the battered original alligator-grain chipboard case that is still useful for storage, at least. Very Good + Condition.
×