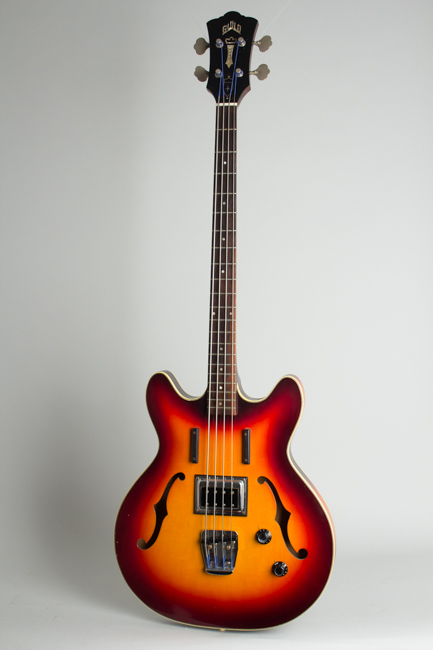 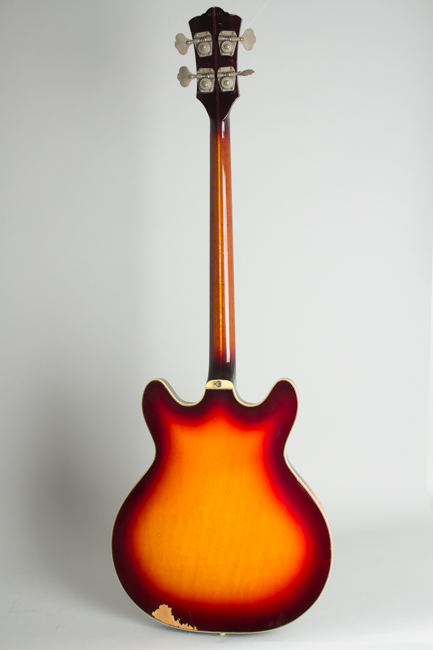 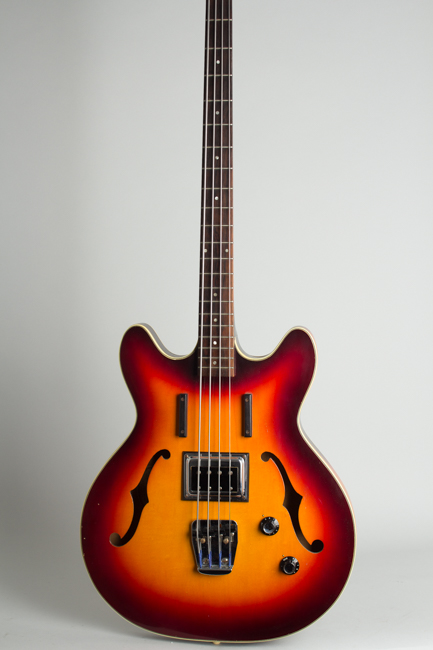 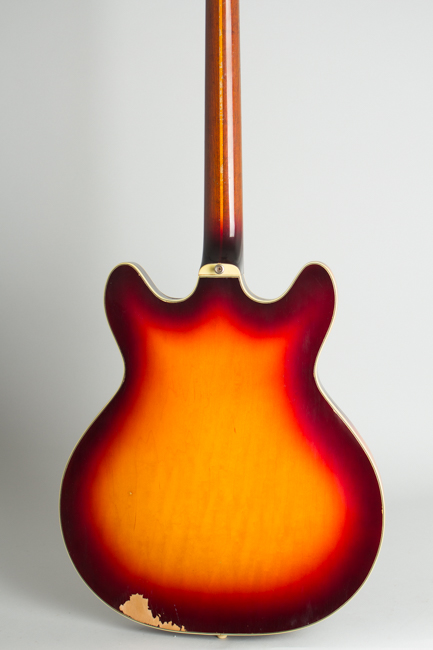 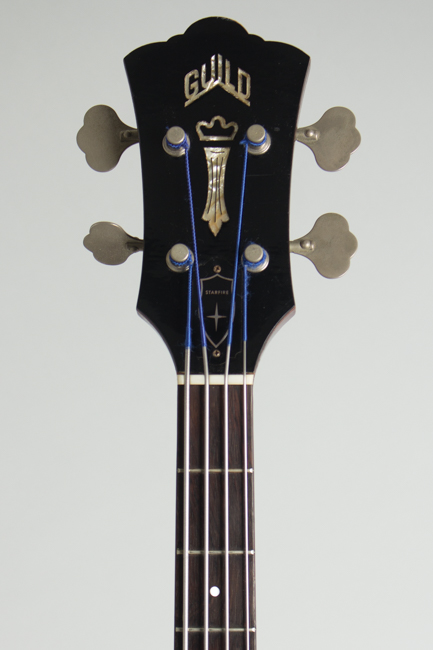 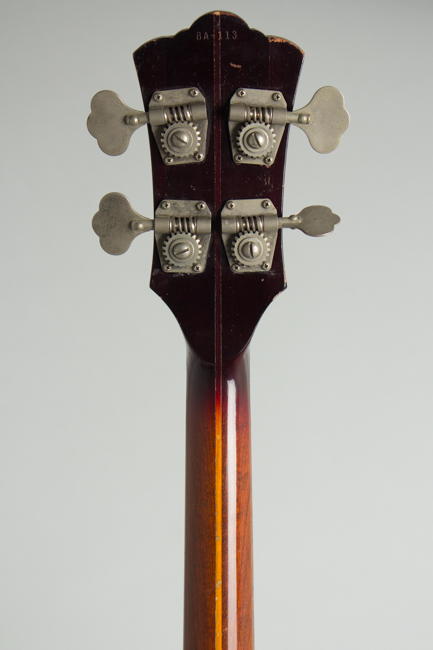 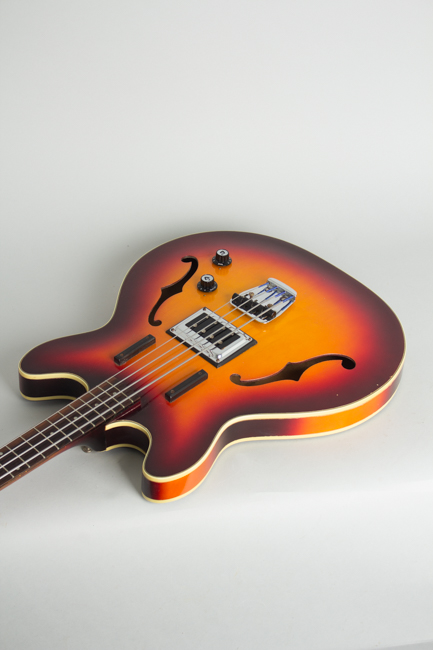 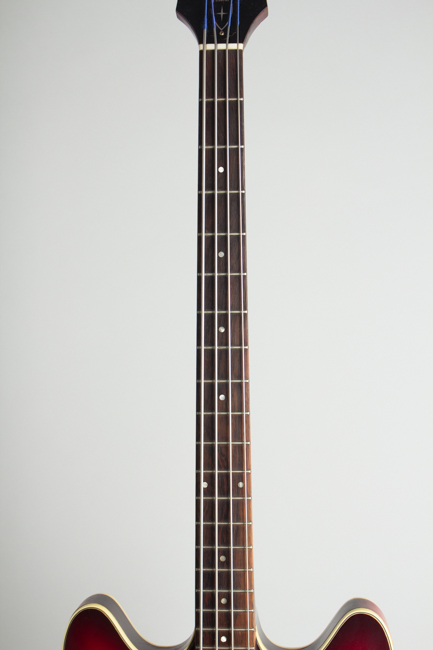 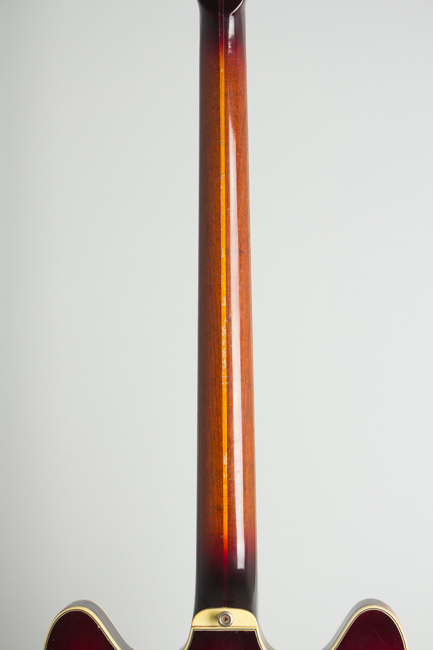 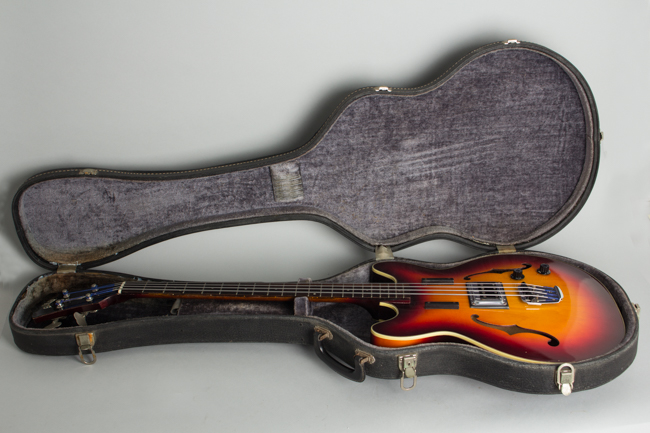 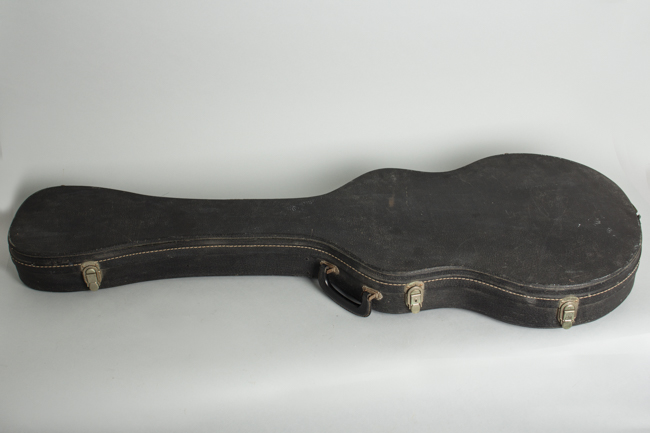 This is a rare and super cool example of the very earliest Guild electric basses. This Starfire Bass is from the model's introductory year of 1965 and bears a very low serial number. Guild's Starfire bass remains one of the 1960s' most distinctive bass guitars. Despite a general resemblance to the Gibson EB-2 and Epiphone Rivoli, the Starfire is a completely different animal sonically, putting out a very clear and powerful sound with a wide frequency range and an almost piano-like growl unusual in a hollow-body bass.

Guild did not enter the electric bass arena until 1965, when the semi-hollow double-cutaway Starfire line and the solid-body line both had a single-pickup bass added. While the solid-body Jetstar soon crashed and burned, the Starfire soon became one of the company's most popular items. The 30 1/2" scale neck is very slim and comfortable to play, especially compared to most other American basses of the 1960s. The body is not fully hollow; there is a solid block running through the center in the manner of a Gibson ES-335, giving a tighter response and more resistance to feedback than a true hollow-body bass.

The real secret to this Guild bass' unique sound is the large Hagstrom-made Bi-sonic pickup, which looks like a double-coil unit but is in fact more akin to a giant single-coil DeArmond. With large magnet slugs for polepieces, this pickup has a very powerful attack and a broad harmonic range quite unlike either the more familiar giant Gibson bass humbucker or the Guild humbucking pickup which replaced it in 1970. Some of the early Starfires have different Hagstrom pickups built on a smaller coil that are not as sonically impressive.

This particular Starfire is from early-mid 1965 and is numbered BA-113; that series specific to this model starts at BA-101. While a handful of basses were built before the inception of the individual series numbers, so few are extant as to suggest they are virtually pre-production models. These carry the standard cumulative Guild serial numbers that were superseded in mid-1965 by the model-specific series. Starfire bass numbers for 1965 run only up to BA-177, so likely well under 100 basses were shipped that first year.

This bass is one of the first, with features specific to that period. The major difference from the later models is the pickup position, mounted fairly close to the bridge for a much tighter attack. This bass has a single tone and volume knob set, pre-dating the introduction of the baritone tone switch added in 1967. The neck is very slim without much taper, with a dot-inlaid rosewood fingerboard. The headstock is faced in plastic and mounts American-made Kluson bass pegs; some others of these very first models had Dutch-made Van Gents. The triple-bound body is finished in a vibrant 3-color sunburst, somewhat less common than the cherry red finish.

Starfire basses found some enthusiastic users right away; The Lovin' Spoonful's Steve Boone used them exclusively, while Chris Hillman of The Byrds used an early model identical to this one for much of 1965-66. Later the Starfire Bass became a prominent part of the San Francisco sound with both Phil Lesh of the Grateful Dead and Jack Casady of the Jefferson Airplane choosing the model for their psychedelic explorations of the low end.

With a very slim and fast-playing neck, the Starfire is the perfect bass to "take off" on and remains as unique as when first designed. This is the earliest we have ever had, and a truly superb instrument. If you've been looking for the exact bass correct to play "Turn Turn Turn" and "8 Miles High" in your Byrds cover band, this is it!

This bass has some minor signs of wear but remains a fine, original, and rather rare version of this 1960s 4-string classic. The finish is bright and unfaded with beautiful color; it shows very little play wear but has a few flaked areas -- notable on the lower back -- from exposure to moisture. The neck laminations can be felt along the back but there are no separations; there is some finish wear along the spine. All hardware is original and complete and the bass plays and sounds exceptionally fine, about the nicest Starfire we have had. A true connoisseur's delight in a 1960s Guild bass, complete in the original HSC. Excellent + Condition.
×