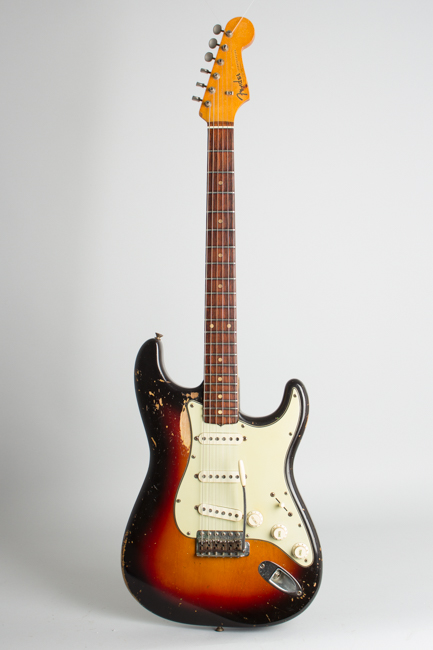 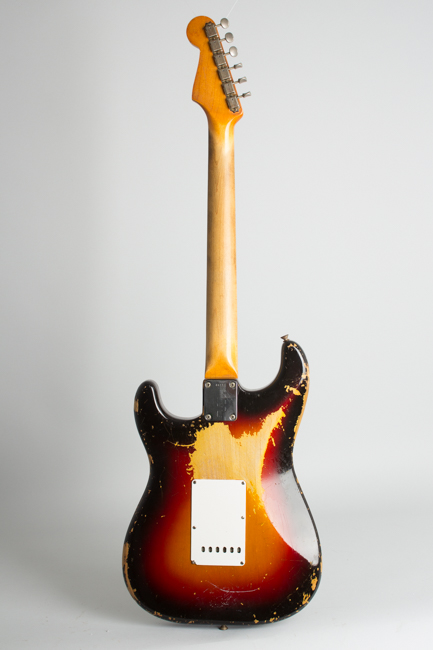 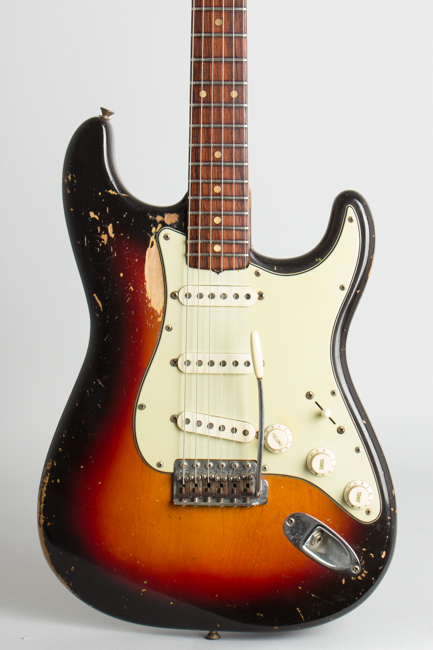 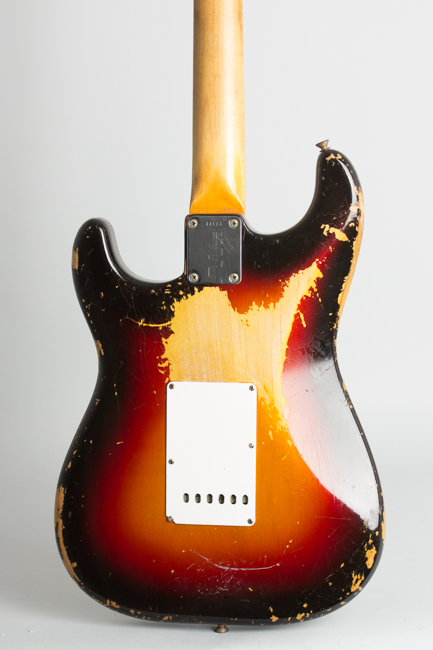 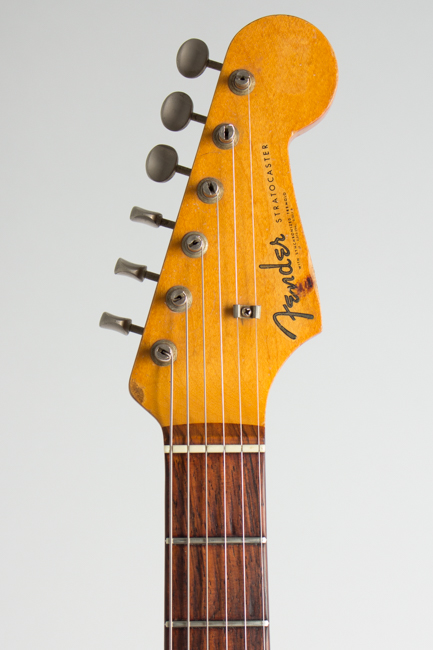 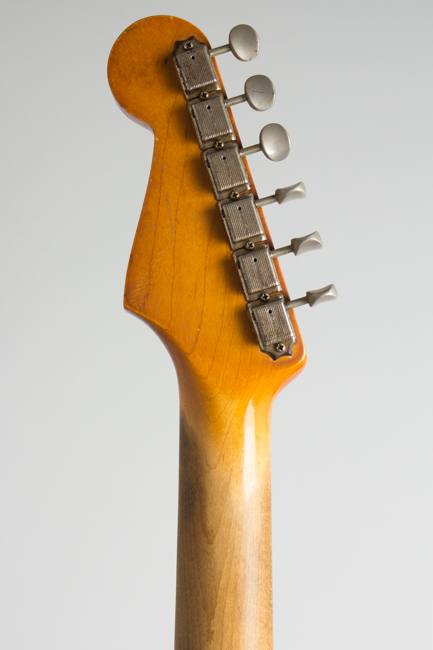 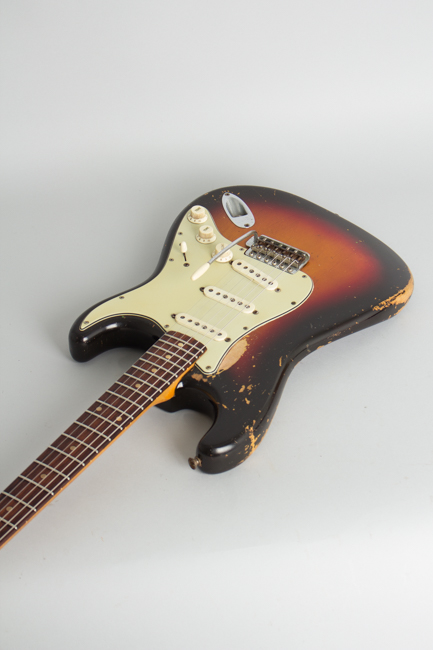 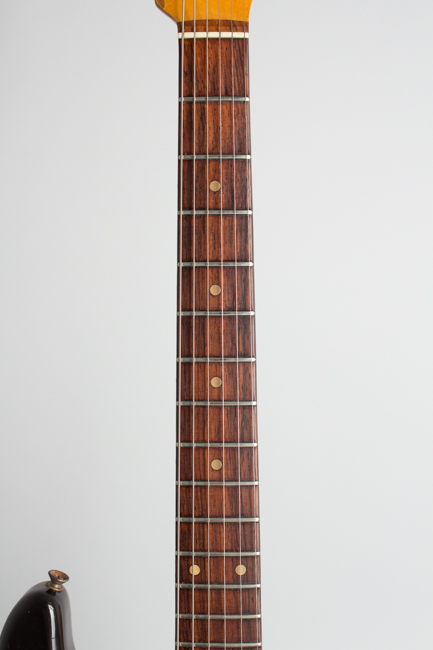 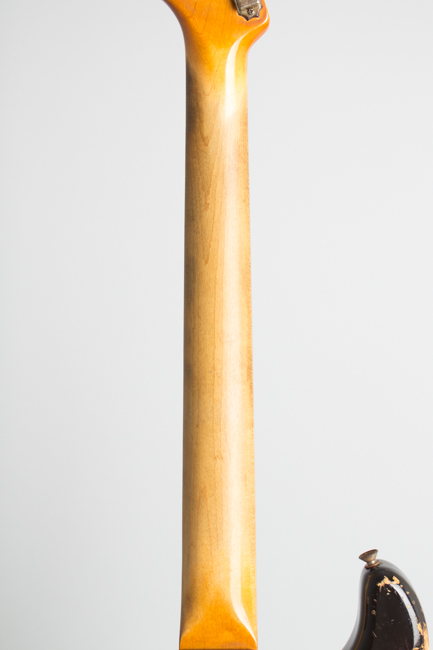 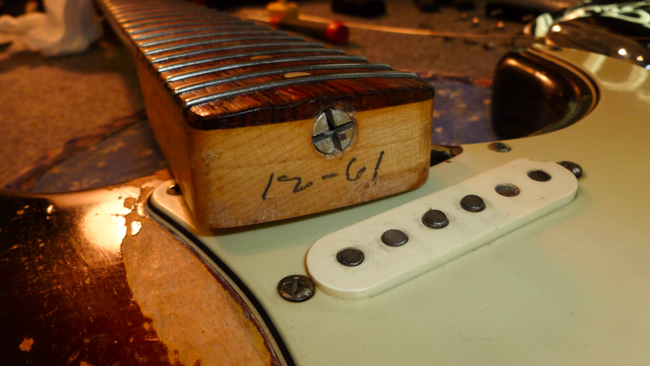 This is a very well-played-in slab-board Pre-CBS Stratocaster, heavily used but not abused with a super cool vibe. It shows typical features for the period, when the Stratocaster was still a very popular model but no longer Fender's top of the line offering. The neck carries the smaller Pre-CBS style headstock with the older gold "Spaghetti" logo decal phased out in 1964. The rosewood fingerboard is the thicker version used from 1959, referred to later on as the "slab board" to distinguish it from the much thinner laminates Fender began using soon after. It is inlaid with the earlier pattern "clay" dots that would also be phased out at the end of 1964.

The sunburst finish is a deep and nicely blended 3-color sunburst that still retains good color despite the years of wear. The pickguard is the lovely greenish nitrocellulose that would also disappear beginning in 1965, replaced by plain white plastic. The neck is dated 12-61, so the guitar would have likely been assembled and sold in early 1962; nonetheless, as we mostly accept the neck date as the guitar's "birthday", it is considered a 1961 model. Split-hairs aside, this is simply a great-sounding Strat built well before "things started a-changin" in Fullerton after the January 1965 sell-out to CBS.

All three pickups have a strong tone, and the "in between" settings offer up a "Stratty" quack without sounding as glassy as some later models. The early 1960s slab board Stratocaster has become a player's favorite over the last few decades, often offering up a meatier tone than either the earlier maple fingerboard guitars or the later CBS period examples. This particular guitar has been in a single family for decades, played in R&B and blues bands in the Detroit area much of that time. A fabulous example of the undying appeal of prime Fender mojo, still housed in its battered original brown Tolex case.

As noted this is a very heavily used guitar, but still a great-sounding and playing one! The body finish shows a LOT of wear, specifically a large belt-buckle swath on the back, some typical edge wear, and an unusually deep area worn into the wood above the top forward corner of the pickguard. This looks like someone rested their thumb there for years, and is the sort of thing more common on Fender basses than guitars. The finish on the back of the neck is also mostly worn away, giving it that glorious "played-in" Fender feel. There is a small cigarette burn on the headstock in an unusual spot, just over the bottom edge of the decal. Someone left their smoke under the high E string instead of the "classic" low E string burn spot.

All hardware remains original including the Kluson tuners, pickups, wiring, pots, switch, and primary bridge components. The saddle height adjustment screws are the correct style but probably later, as they are not rusted enough! All plastic and even the trem are original as well; the pickguard has no cracks or heavy shrinkage, but there is some notching from decades of truss rod adjustment. The rear trem spring cover has a corner chipped off and a few replaced screws. Internally the electronics appear unaltered, the original masking tape wrap on the pickup leads is intact. The solder joints appear original and untouched except the grounds to the volume pot.

The guitar has been refretted and the frets are later style, larger than the 1960s wire in both height and width. They are well crowned and would be typically preferred by players doing a lot of string bending in a heavy rock or blues context. We have left this intact although the wire could be modified or replaced as desired to something closer to original spec. As it stands the guitar plays very well as a "No Guilt" jumbo fret experience! This is a super player's guitar, a fabulous "Genuine Relic' Fender that remains true to its original character, and simply feels and sounds great. Very Good + Condition.
×