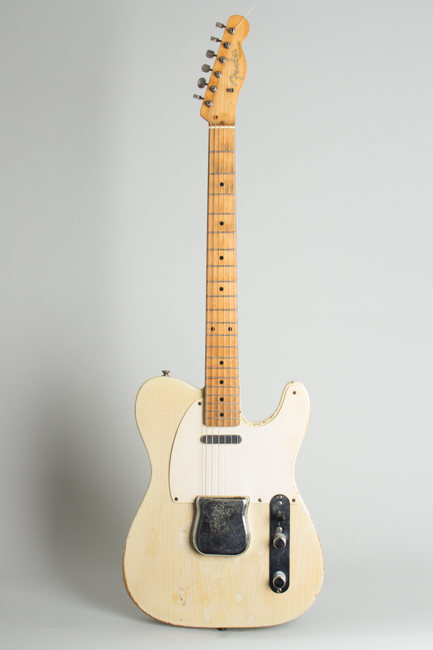 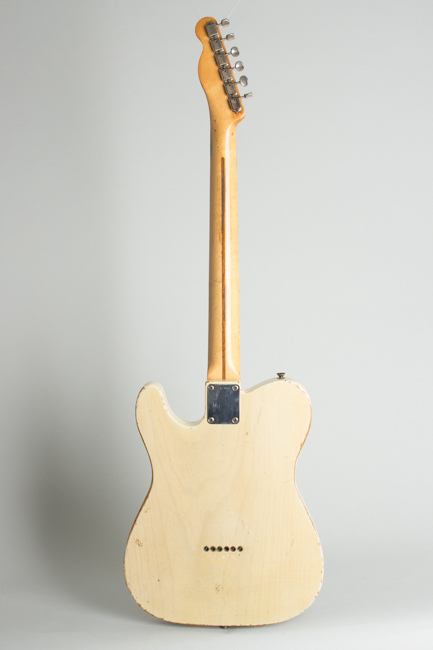 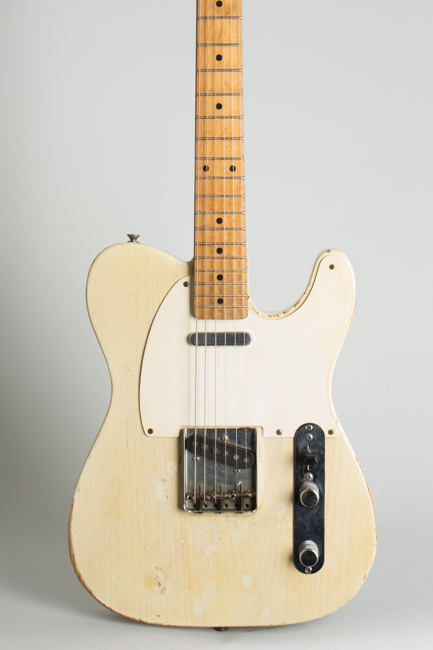 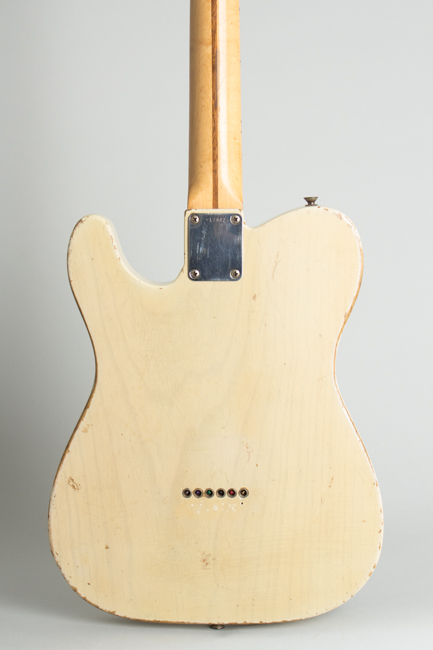 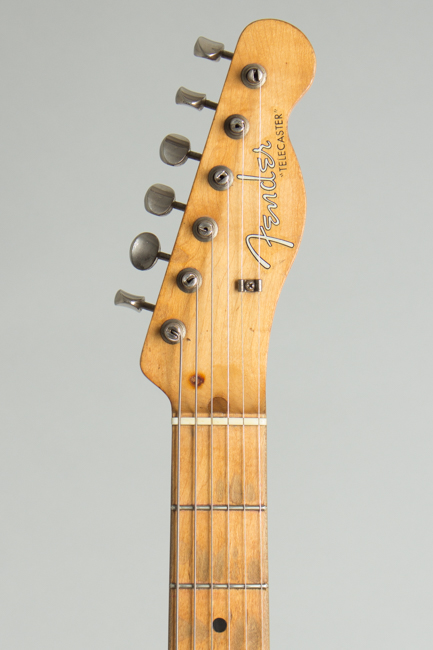 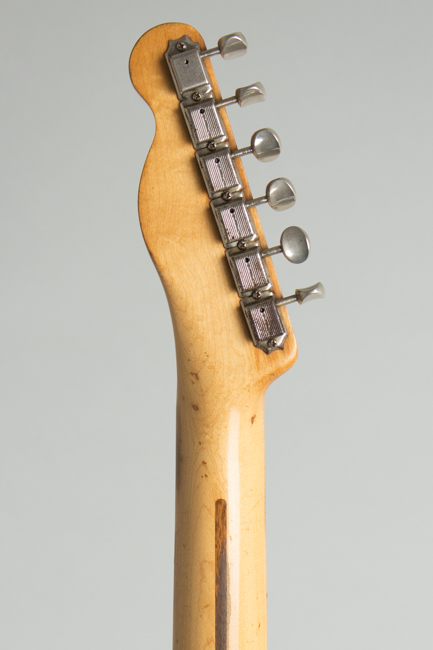 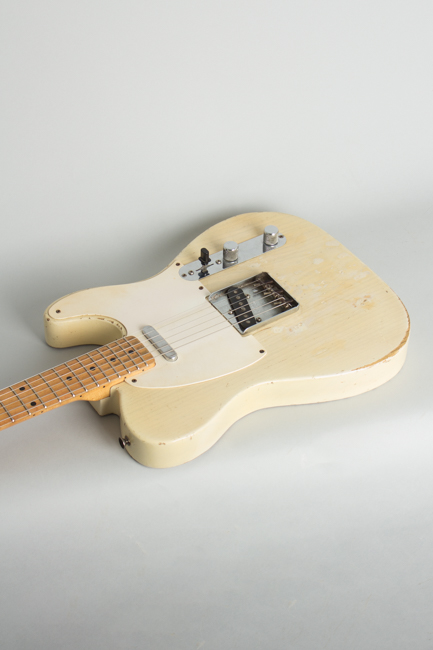 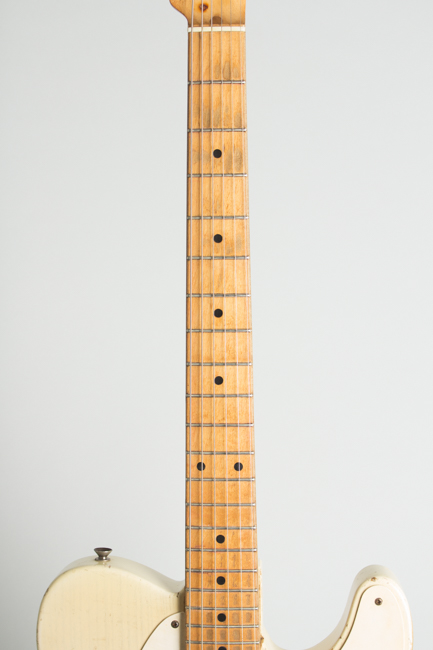 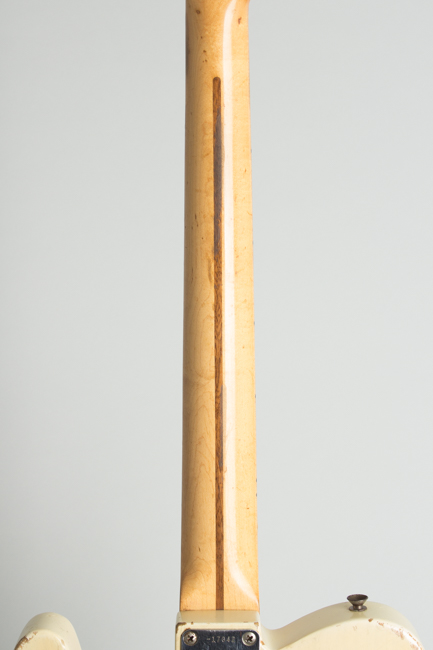 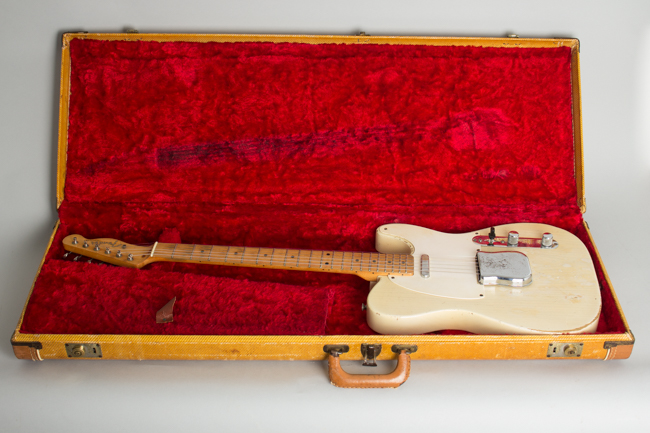 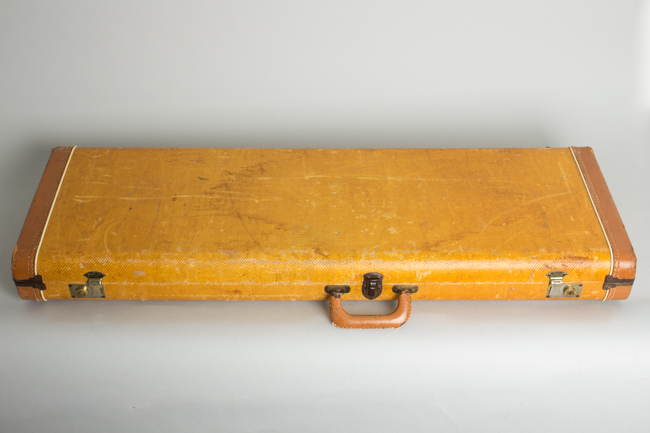 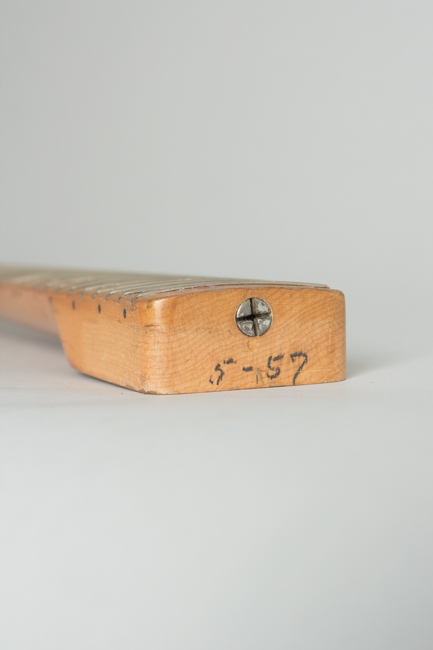 This played-in but still original "white guard" 1957 Telecaster guitar shows some wear and touch-up, mostly to the front, but retains the characteristic features of this period in Tele history. The most immediately noticeable is the single-ply white plastic pickguard which had in 1954-5 replaced the earlier black phenolic piece on Teles and Precision Basses, making the look and production materials consistent with the then-new Stratocaster.

The one-piece maple neck is dated 5-57 at the heel. The back of the neck has a medium "V" contour, with less shoulder than earlier necks but not too sharp a spine. The visible pot date is the 3rd week of 1957. On the headstock the old-style script Fender "Telecaster" logo decal is positioned above the recently adopted "butterfly" string tree. The nicely-grained ash body has a much lighter and "whiter" blonde finish compared to the darker earlier '50s-style butterscotch hue. This "white-blonde" look would be the norm in the late '50s, continuing up into the CBS era.

The staggered-pole lead pickup is the earliest version of this newer design, generally similar to earlier Telecaster units but with the altered magnet layout; the center poles are raised slightly. This guitar's wiring has been not been altered to "modern" spec and the original "mud cap" is still in place so the center switch has to be carefully balanced to engage a blend of both pickups. The original wiring and control parts are still intact and unaltered.

The serial number is stamped on the neck plate having been moved there from the bridge tray a couple of years earlier when Fender harmonized all their electric guitars into one number series in 1955. This number is preceded by a minus sign, a quirk of Fender neckplates from this specific period. The knobs are a smoother-sided knurl with a flat top and the switch tip is the new "top hat" style recently introduced.

This 1957 Telecaster has seen a decent amount of use; the face of the body has had some unusual wear and finish touchup and has an authentic "relic" look to it. It remains a fantastic-sounding guitar and a joy to play, with that genuine "worn-in Fender" feel that is very difficult to capture. By 1957 the Telecaster had become a success, renowned as a popular tool used by working musicians, including a host of early rock'n'roll and country players. Many have been played for decades and worn virtually into the ground; this one has its road scars but is still a truly great instrument and a genuine relic.

This old Telecaster has seen its share of play time and some minor work over the years, but nothing that alters its essential character. The original blonde lacquer finish is mostly intact with some general wear on all surfaces. There is some finish touch up work to the top of the body that is hard to explain; it looks like a number of dings, dents, and scratches were inflicted and later touched up, giving a somewhat uneven appearance now decades on. It almost looks like the guitar got caught in the periphery of a shotgun blast, and then cleaned up. This is all topical; there is no overall overspray or refinish.

The pickups and all the components of the wiring rig are still original, including all solder joints. The single-layer white plastic pickguard has some "smoky" patina to it but is intact. All other body hardware including the control plate, knobs, and strap buttons appear original and unaltered. Even the "ash tray" cover is present, with some wear to the chrome on top and evidence underneath it was actually used as an ashtray long ago!

The neck shows some general finish wear but less than many from this period. It has been neatly refretted with period appropriate wire, which shows virtually no wear. There are some light divots to the maple board in the lower positions and "strum wear" up near the body end. The headstock has a couple of spots near the top edge where it looks like small cigarette burns were scraped off, and one small burn mark remains on the headstock under the A string.

The only really notable flaw to this instrument is the finish work to the face, which is more noticeable under a blacklight examination than the naked eye. Other than this it retains all of its vintage character, free of the modifications inflicted on many old Telecasters. The phrase "genuine relic" pretty much sums it up. It's just one of those guitars you don't want to put down. Great-feeling and fantastic-sounding with a meatier lead tone than many mid-'50s Telecasters and some nicely transparent blended tones as well. Ready to go back out into the world, and housed in a relatively well-preserved original tweed case. Overall Very Good + Condition.
×