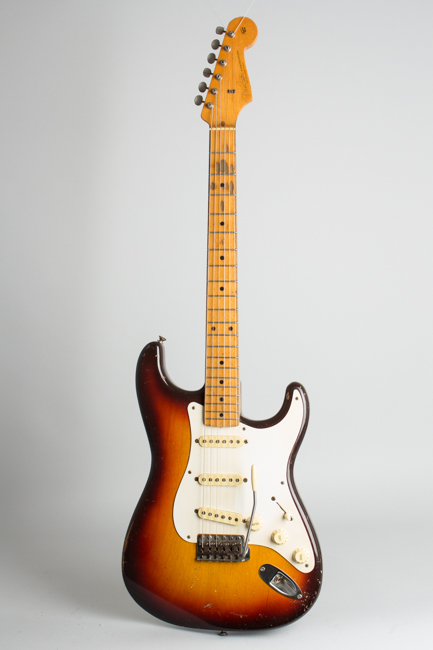 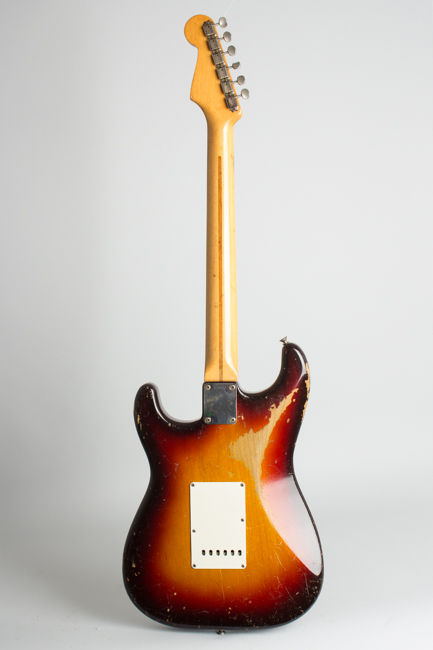 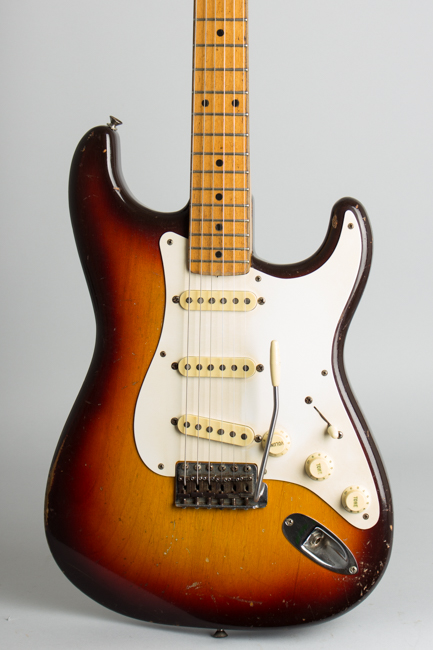 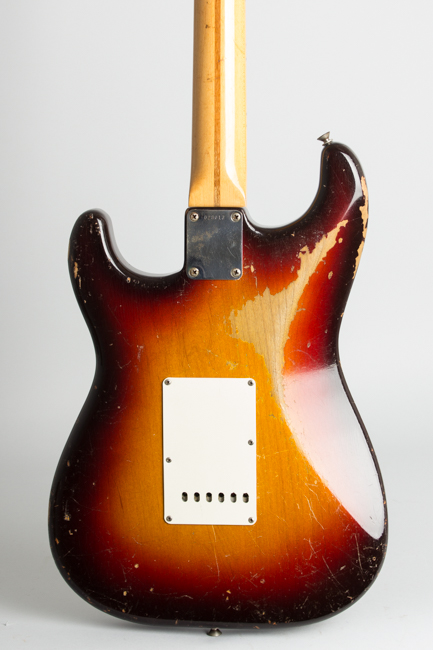 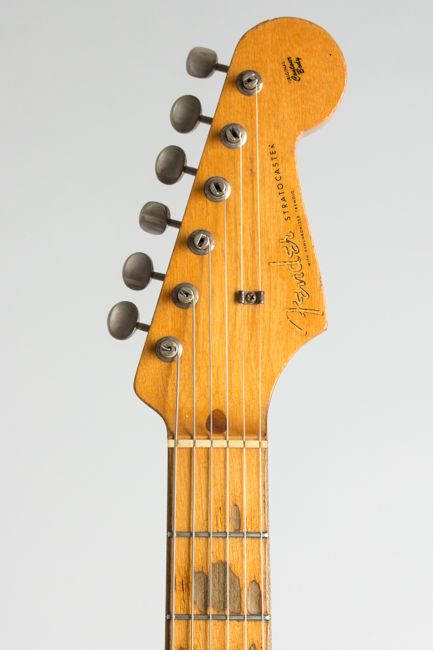 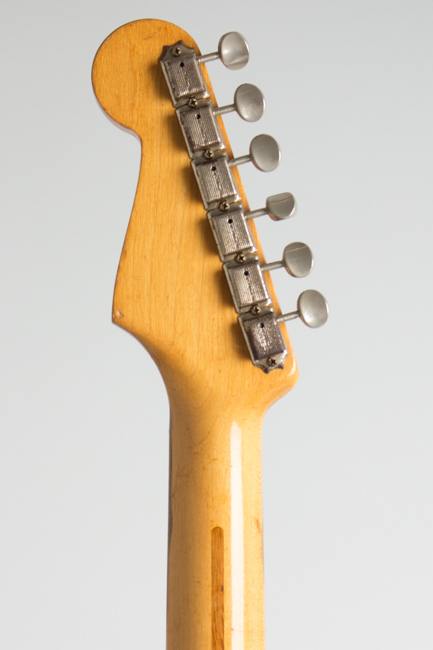 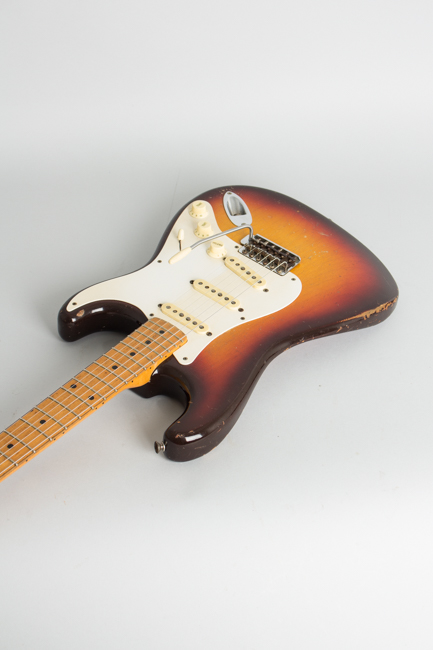 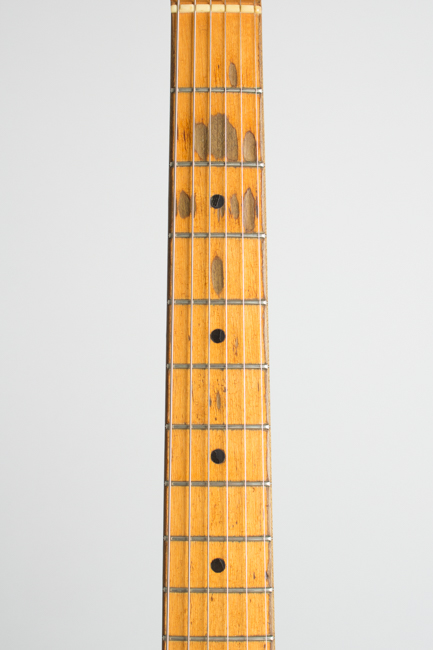 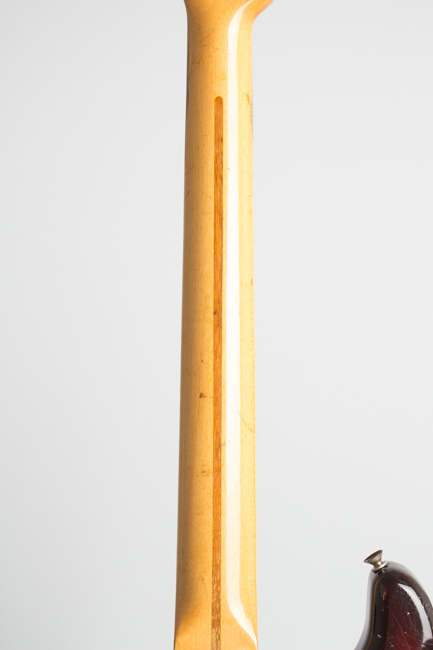 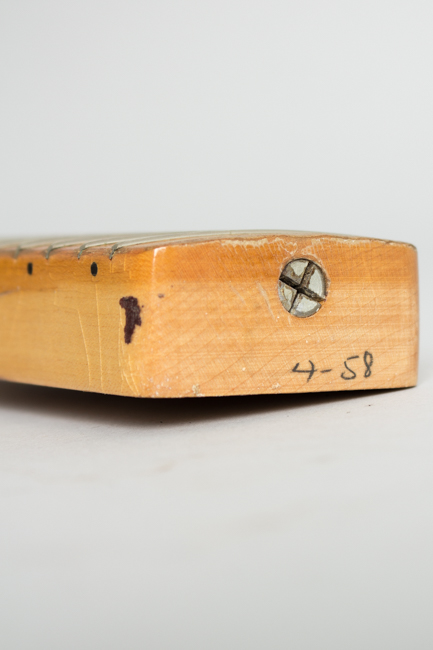 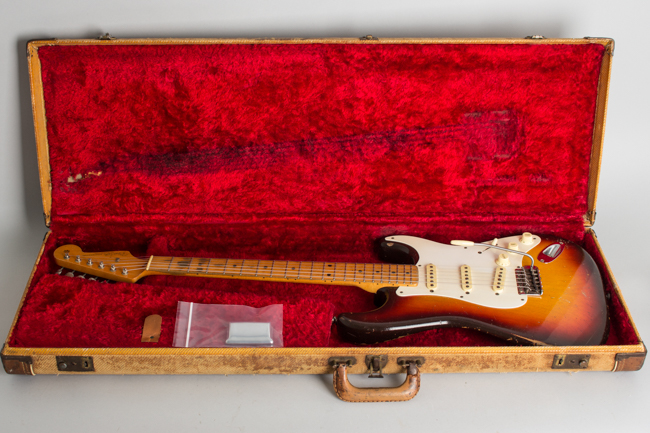 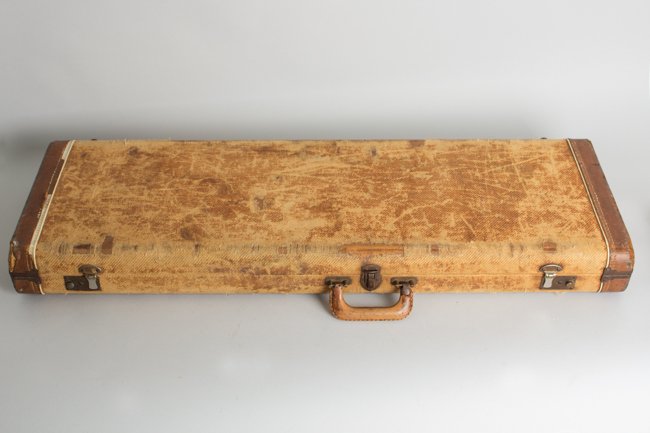 This Stratocaster dates to early 1958, several years after the model's introduction but a time when it was still the most futuristic fretted instrument on the market and a showpiece for Fender. The body sports the recently introduced 3-color sunburst lacquer finish which added a red layer to the previously more staid two-tone brown livery. This one is dated 4-58 in the center pickup cavity so is a very early example of the new look. The great-feeling round-profile neck is also pencil dated 4-58, made shortly after the 1956-7 "V" profile was superseded by this more subtle shaping. The natural lacquer finish is still clear, with light checking, and the fingerboard showing typical wear. There is one surprising oddity -- the side of the neck has double dots at the 9th fret as well as the 12th, a factory error we have never seen before. This is under the lacquer and factory original.

"Under the hood" all is original except for a later volume pot, a fairly common situation as often it was the only one that got much use! The two tone pots are a matched set date coded to mid-1957, and all other wiring and solder joints remain original. All three pickups are fully original and sound great, and the three-way switch has a very solid feel selecting the "in-between" tones easily.

This guitar has seen some moderately heavy use but has managed to avoid the indignities that many old Fenders went through like refinishes, humbucker routs, jumbo refrets, and locking tremolos. It remains as Leo and his crew intended, a versatile tone machine par excellence. It is simply a wonderful-feeling 7 lb. 12 oz. guitar and a great reminder why the world fell in love with the Stratocaster in the first place! We call it the "double double" in honor of its dot oddity and feel this is a lucky Strat for sure!

Overall this is a fine-playing and sounding 60+ year old Stratocaster with the only notable alteration being the replaced volume pot noted above. The three-tone body finish shows less fade than many but has numerous dings, scrapes, and dents; the only large area of loss is a long belt buckle spot on the upper back. The clear lacquer is relatively clean on the back of the neck, with a decent amount of wear to the fingerboard, mostly below the 7th fret -- especially in the "Cowboy Chord" area and to the edges. The metallic center fill in the "Fender" logo part of the headstock decal is mostly gone, leaving a ghostly black outline; all the rest of the lettering is still intact.

The hardware and fittings appear original including the Kluson tuners, pickups, switch, tone pots with "Chicklet" capacitor, single layer white pickguard, bridge, and saddles. The saddle adjustment screws are newer on all but the low E; it's likely they became rusted and were changed out some time ago. The trem arm looks newer as well, although the tip appears period. The original white plastic pickup covers and knobs have a slightly yellowed patina, typical of guitars played in the smoky environment of decades past. The fret wire is the correct original style; based on the fingerboard wear we would assume the guitar was refretted at some point, but if so it is a clean and very accurate job.

This one has played a lot of E, D, C, and G chords, and has the wear and patina to prove it. It is still an excellent-playing and sounding Stratocaster with a slightly less "glassy" tone than some '58s and a particularly lively bridge pickup. It has a killer vibe, and resides in its original tweed case, which is worn but still functional with the bottom part of the interior case pocket MIA. Very Good + Condition.
×