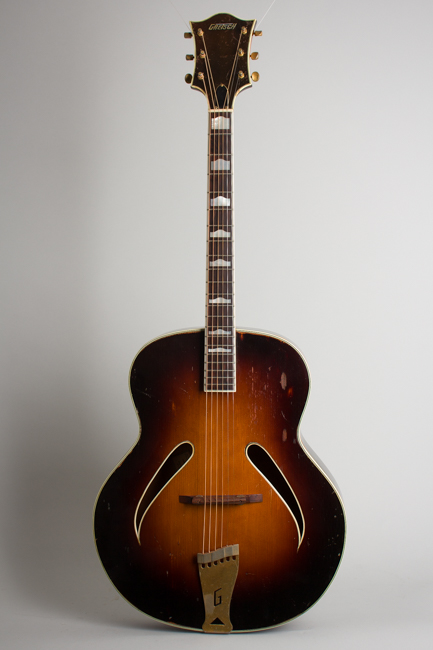 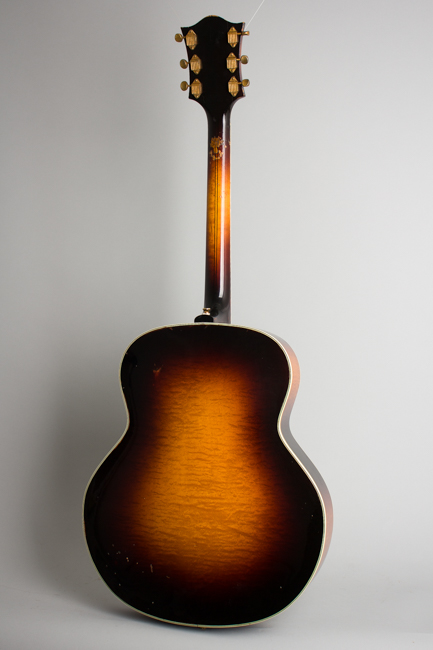 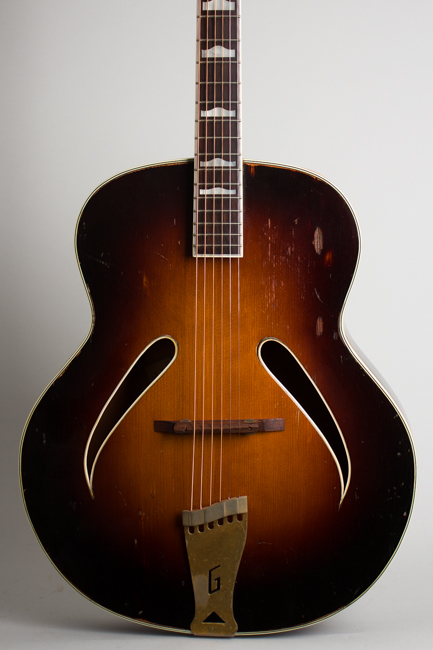 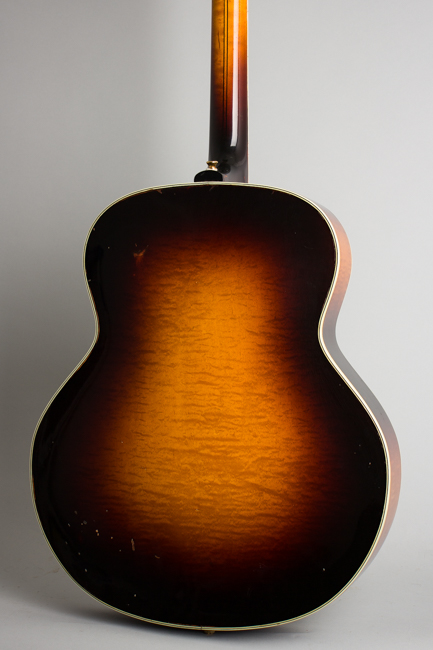 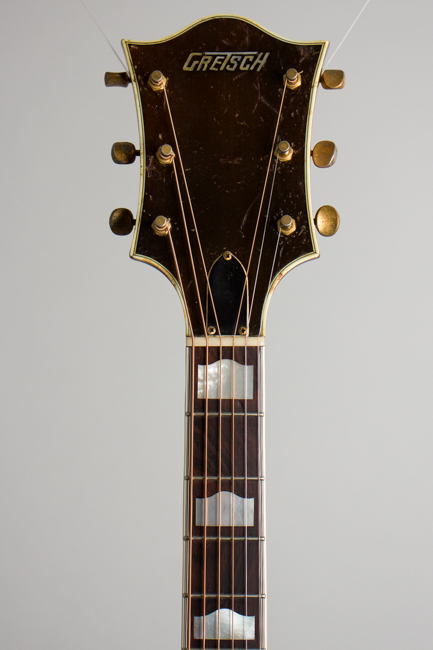 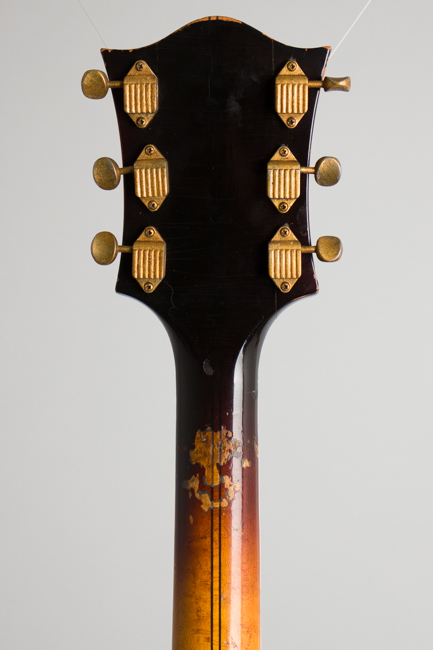 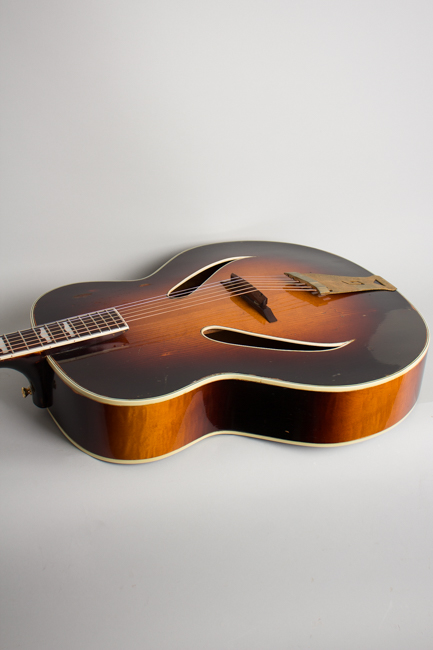 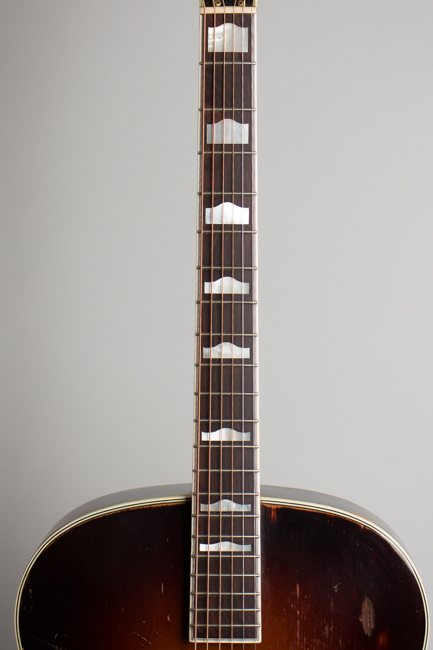 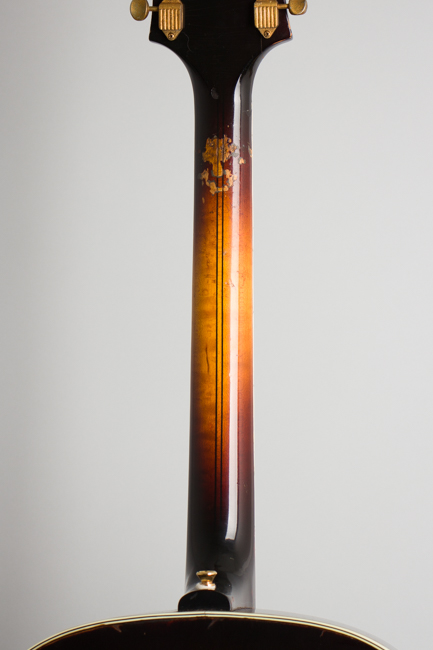 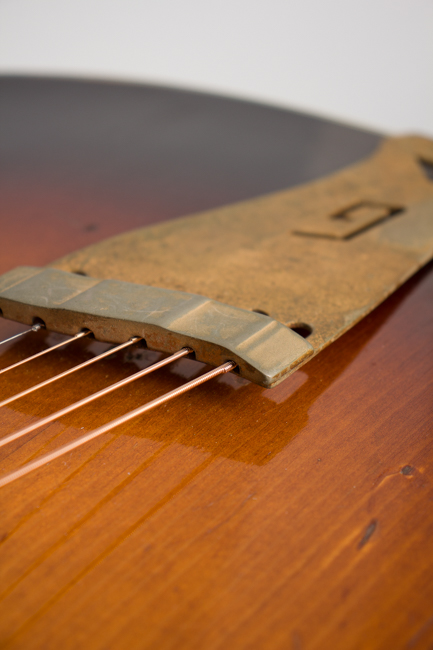 This big and bold 17" acoustic arch top is one of the more unusual 1950s Gretsch instruments we have seen, and that's saying something! While labeled as a Model 6028, this is a unique probably one-off creation from 1954 with a mix of features. The serial number (13773) belongs to a specific batch of 50 labels set aside at the Gretsch offices for non-standard or prototype models,; samples of the proposed signature model sent to Chet Atkins are numbered from this same roll. This instrument is most likely a custom order piece; the specific features (especially the older Synchromatic-style "cat's eye" soundholes) make it unlikely it was intended as the prototype of a new model.

The original Gretsch Synchromatic archtops were among the more distinctive designs of the 1940s, but saw only limited commercial success. By the middle of the '50s the company was moving away from most of their unique features into more conventional (and eventually more profitable) designs. Gretsch eventually found their footing with electrics; the acoustic line is not something the company is particularly well remembered for. In 1954 Gretsch was making only limited numbers of purely acoustic archtops, mostly low-grade ones. They scored a high-end endorser with Basie rhythm man Freddie Green but it was Chet Atkins who really put them on the map with electric players.

Sometime in the middle of all these changes, this guitar was born. The serial number would suggest it was made in early/mid 1954, but this block of 50 labels may have been doled out more slowly than most as they were used on one-off instruments. That label identifies it as a Model 6028, a 17" Synchromatic 160 model discontinued around 1951. The 17" wide body with cat's eye soundholes would be a carryover from that model, but the hump-block inlaid neck, G-cutout tailpiece and most noticeably huge extra-wide headstock are all new territory.

This is a medium/high end instrument but like most 1950's Gretsch guitars is made of laminated woods; as far as we can tell that includes the spruce top. The back has a nice curly maple veneer; all surfaces have a well-blended golden-red-brown sunburst. The top, back, neck and headstock are multi-bound; there is even triple binding on the cat's eye soundholes. The neck is 5-ply laminate maple, with a rosewood fingerboard inlaid with Gretsch's trademark "humped" pearl blocks and fitted with the earlier '50s truss rod. The neck contour is slim, round-backed and quite comfortable.

Besides the eye-catching Synchromatic soundholes the most notable visual element is the almost comically enormous headstock, unusually square and a full 4 1/2" wide at the pointed tips. Gretsch used some large pegheads at the time, but this one goes beyond any we have ever seen! Oddly enough it is fitted with fairly small Kluson "waffleback" tuners (gold plated) and no ornament on the face except the pearl Gretsch logo. The other hardware includes the typical gold plated Gretsch "G" cutout tailpiece and an adjustable rosewood bridge.

We've seen some odd Gretsch instruments from the 1950s and '60s, as the company was known to accept custom orders from dealers to make a customer happy. Whoever ordered this instrument wanted the older Synchromatic soundholes on a slightly more modern guitar, at a pro-grade but not top-line price. What they got was a very playable arch top guitar, with a nice chunky acoustic sound but not in the league of a carved top Gibson or D'Angelico. This is not a subtle guitar; it is big but fairly lightly built and more responsive than one might expect. It was likely intended as a rhythm instruments in a combo and would work well in that role. What it undeniably offers is visual impact; it's big, bold and a stunner to look at. At some point a floating DeArmond was mounted off the fingerboard; adding one would turn this fabulous looking acoustic into a quite functional amplified guitar that would really turn heads!

This guitar shows numerous signs of use but remains an excellent playing instrument, something not always found with vintage Gretsch acoustics. There is a decent amount of finish wear overall, with dings, dents and scrapes visible most heavily on the top. The back of the neck has a deep wear spot with finish missing and dings into the wood behind the first position; this can be felt but is not too distracting. The rest of its length is relatively clean with a couple other smaller dents. The headstock has a lot of wear spots to the face and not much on the back. The top has some deeper pickwear spots below where the pickguard once was.

That guard is long gone, but the rest of the hardware is intact and original. The gold plating shows typical wear, especially the tailpiece. The original binding is almost all intact, with some light shrinkage here and there and one small spot of chipping on the headstock There are several sets of small "vampire bites" on the sides of the fingerboard extension from old DeArmond brackets. A recent gold-plated strap button has been added at the heel.

The neck has been nicely reset and the fingerboard trued and refretted with vintage-style wire, making for a better playing guitar than many would expect. This is simply a super cool guitar, perhaps not the finest acoustic arch top to leave the Brooklyn Gretsch factory but really a solid playing instrument and a better sounding one than many would expect. And, it was somebody's dream guitar once! The case is long gone but it resides in a well-fitted gig bag. Overall Very Good + Condition.
×