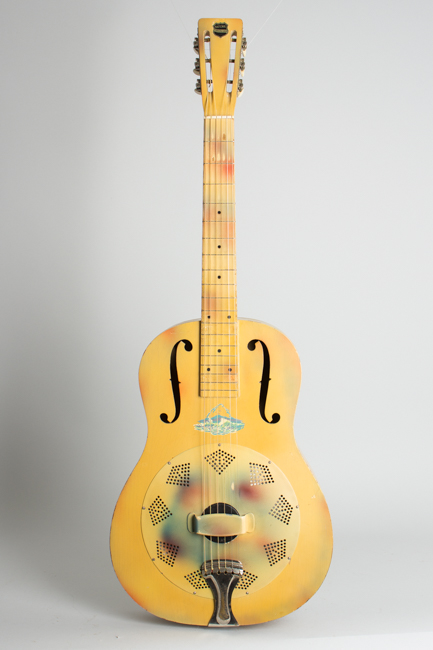 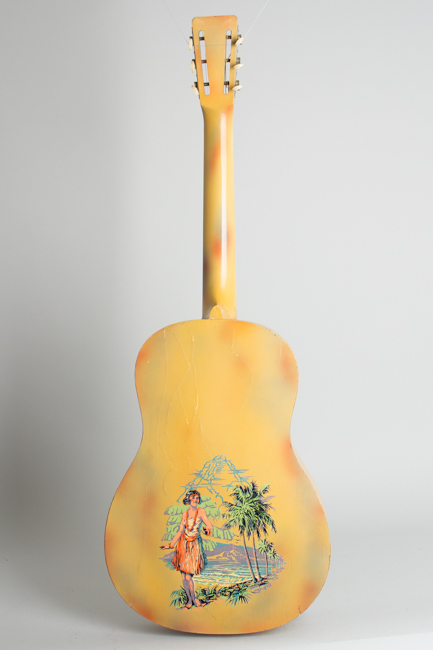 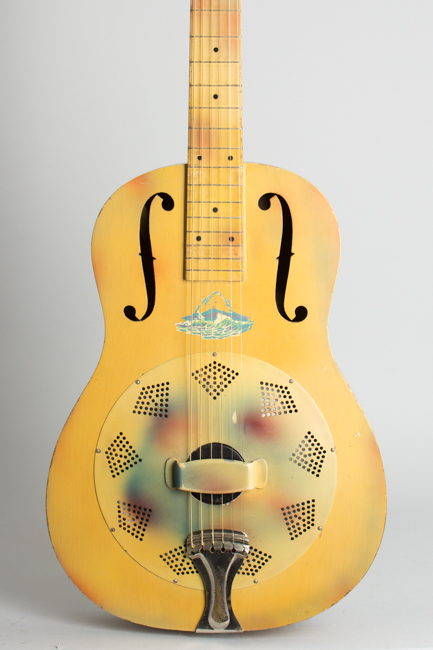 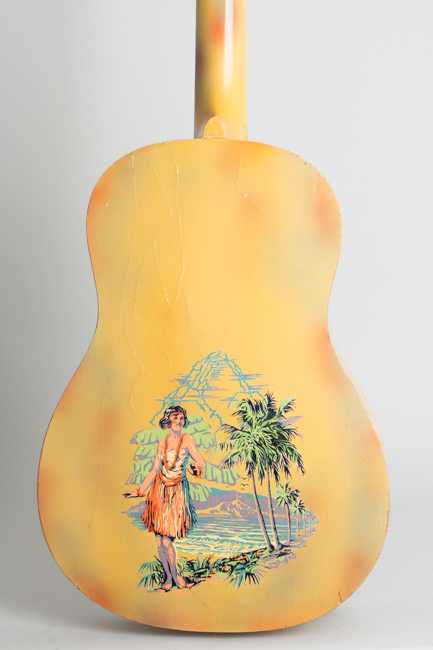 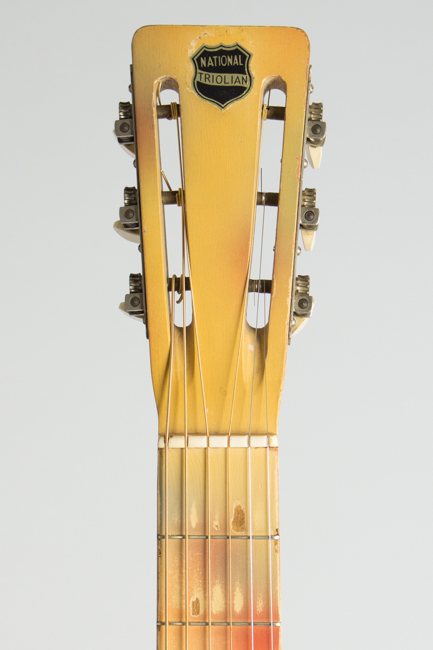 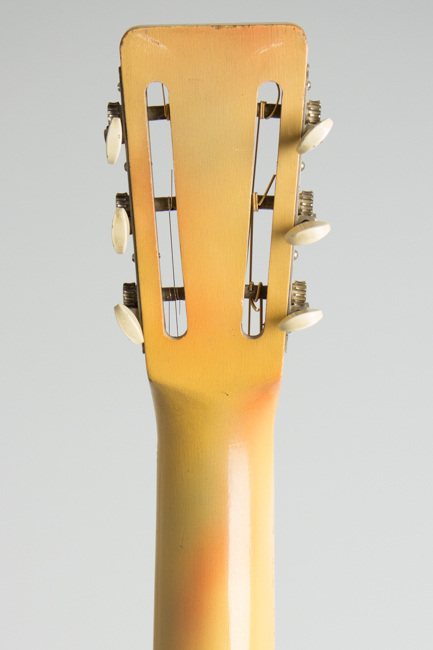 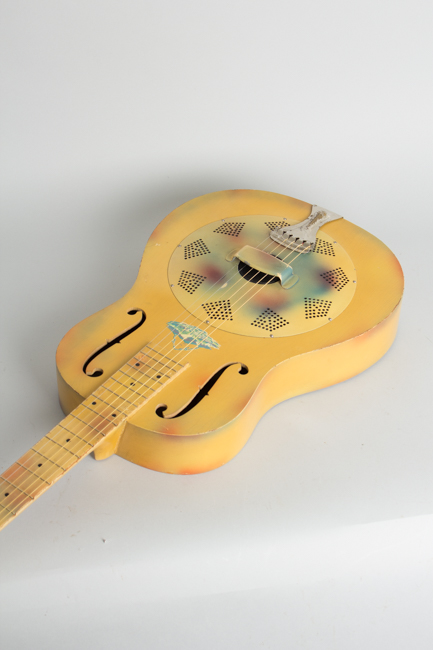 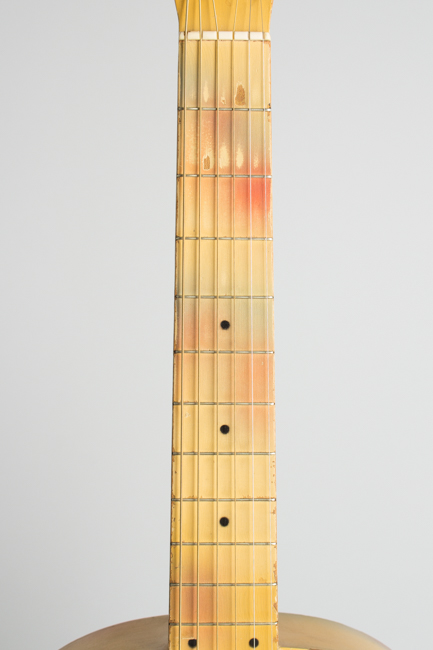 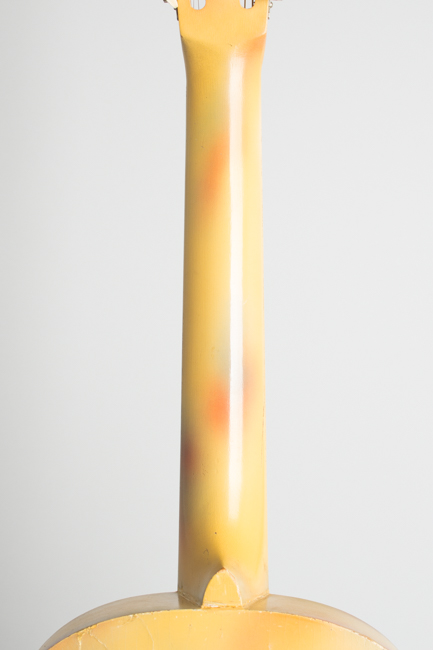 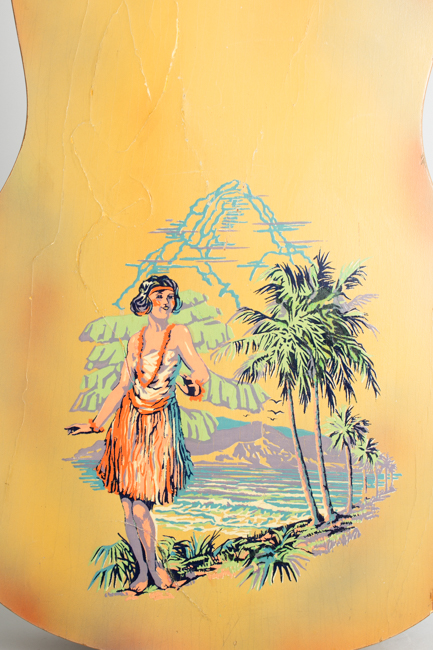 This rare guitar is from the first series of single-cone National resonator guitars built, designed just before the Great Depression made such lower-priced instruments a necessity. This wood-body version of the Triolian was available for only a fairly brief period, introduced in late 1928 and discontinued in the last quarter of 1929. National had tried a triple-cone version of this wood-body instrument (hence the name "Triolian"), but quickly found the concept of a budget Tricone uneconomical to produce. The single-cone design was easier and cheaper to make, but as National was more equipped to work with metal than wood, this version was quickly replaced by the metal body Triolian, which went on to be built in the thousands through the 1930s.

This guitar likely dates from mid-1929. There are many differences between this original style Triolian and the far more common models with stamped metal bodies. This guitar's twelve fret basswood neck has an unbound, painted fingerboard with black dot position markers stenciled on. The laminated wood body is painted medium yellow with subtle airbrushed red and blue highlights. "PATAPP FOR" is stamped into the top just above the resonator cover. The coverplate itself is the second version with holes rather than screens, decorated with a very bold multi-hued spray pattern compared to the body. There is a beautiful full-color stencil of Hula girl on back and an ocean wave on front, both unique to this model. The tuners are the same fairly fancy engraved-plate Waverly strips used on the Tricones of the period.

The single-cone guitars that descended from this first model ensured the National company's survival during the Depression, being far less expensive to produce than the elaborate Tricone that had previously been their sole product. This style Triolian is historically significant, representative of both the earliest commercial single-cone guitar and the first wooden body resonator instrument. It is also a wonderful-sounding guitar, with a deep and surprisingly sweet tone quite unlike its steel-bodied brothers in both feel and tone. These early Triolians are a house favorite and we are always pleased to get one in stock.

This Triolian is very nicely preserved overall, and actually does not seem to have been used very much in 90 years. The somewhat fragile painted finish in better condition than many, with some small chips and dings but mostly wear to the edges. Everything appears original including the cone and biscuit, tailpiece, and tuners. Some plating is worn away on the tailpiece.

The finish on the steel coverplate and handrest is very well-preserved with only some small rubbed away areas, none of the wholesale flaking off common with these early models. The back of the body has a pattern of odd spidery lines that appear to be cracks in the lamination under the finish, as if the top layer of wood was poorly glued in the first place. This is not a structural issue but is odd-looking...we have never seen this before, and it appears to be a factory error of some sort! The body stencils remain in excellent shape and look great; the headstock decal is a later repro.

This guitar has had a neck reset and is in fine-playing condition. The finish patching to the fingerboard end over the body and around the heel is a bit sloppy, but this is a difficult paint to match exactly and it is not distracting. The fingerboard itself is in excellent condition with only small wear spots in the first position. The overall look of the rather fragile painted board finish is much better than most, and the original frets show minimal wear. This is a very nice-playing example of this extremely rare and rather historic National, and it sounds lovely as well. Excellent Condition.
×