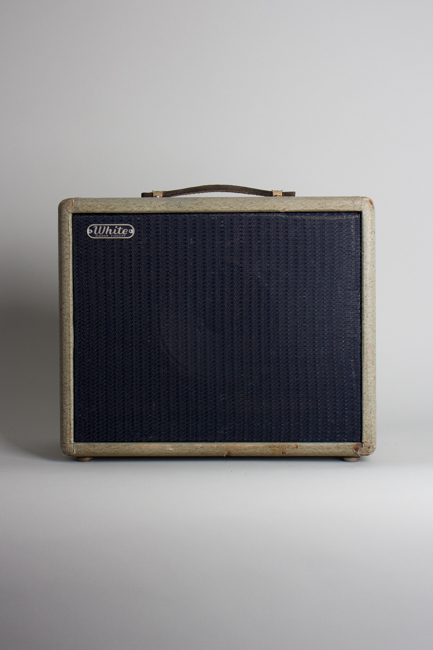 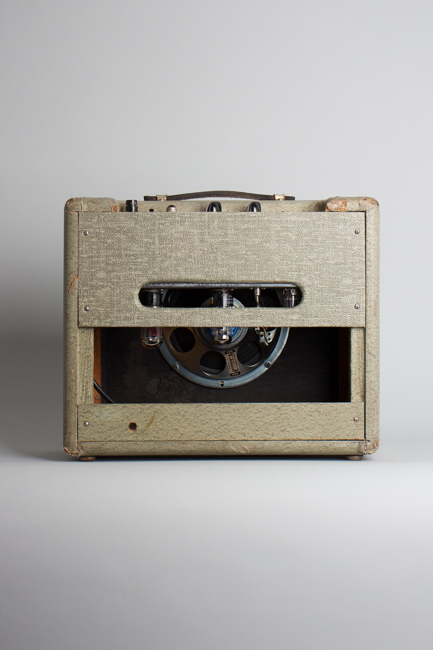 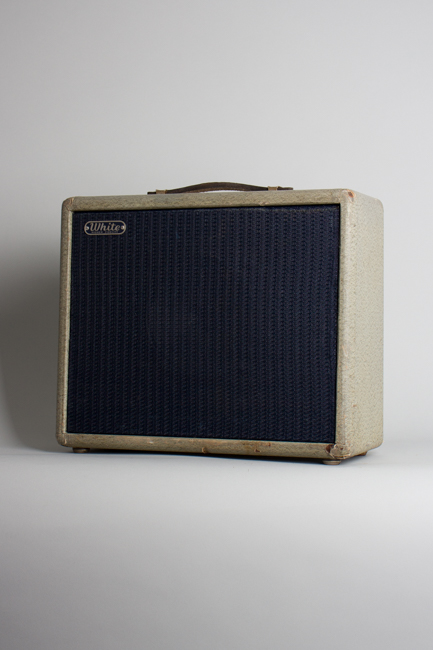 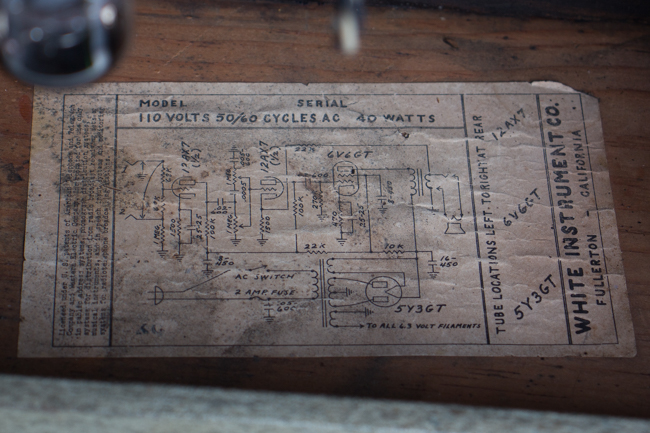 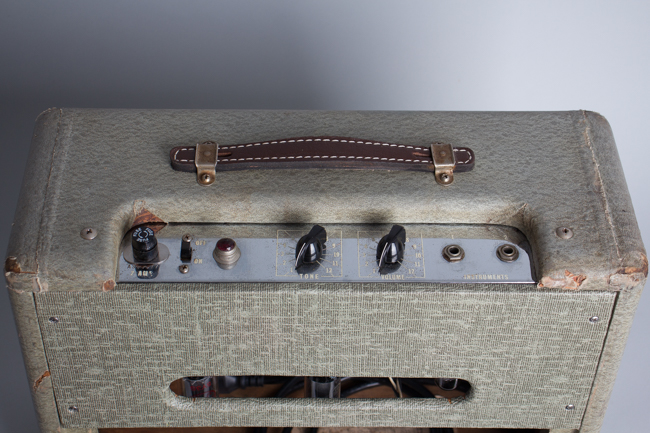 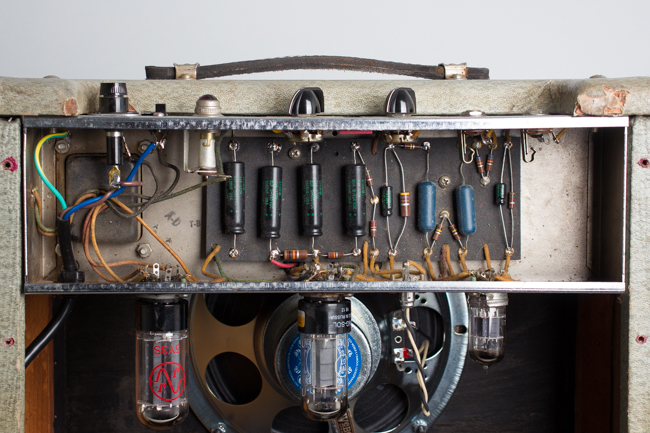 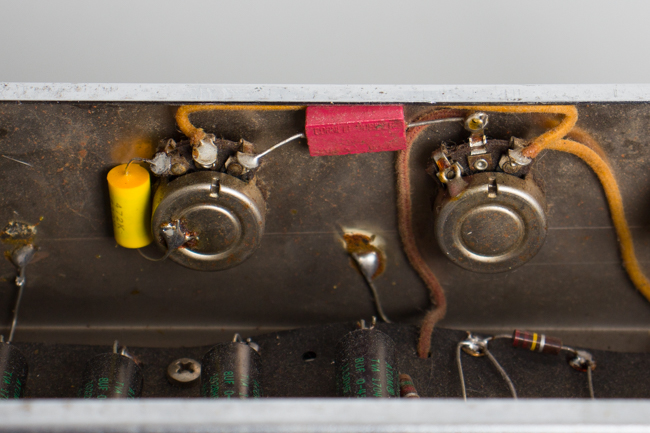 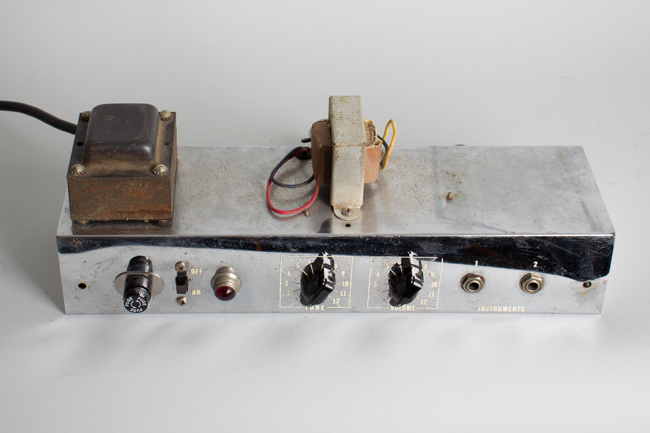 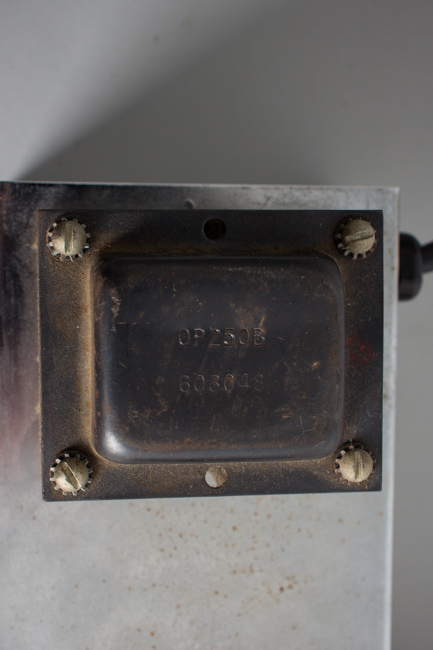 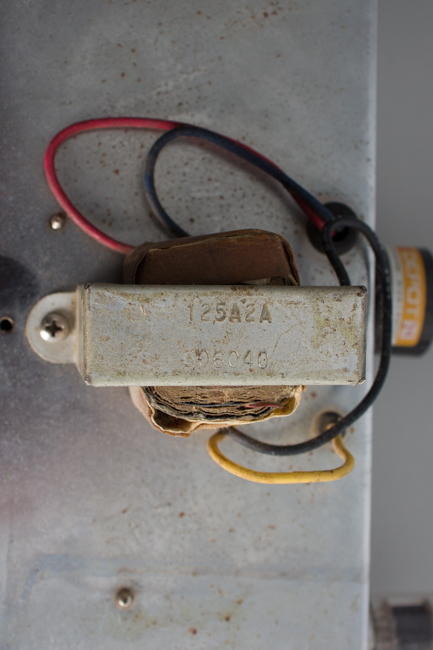 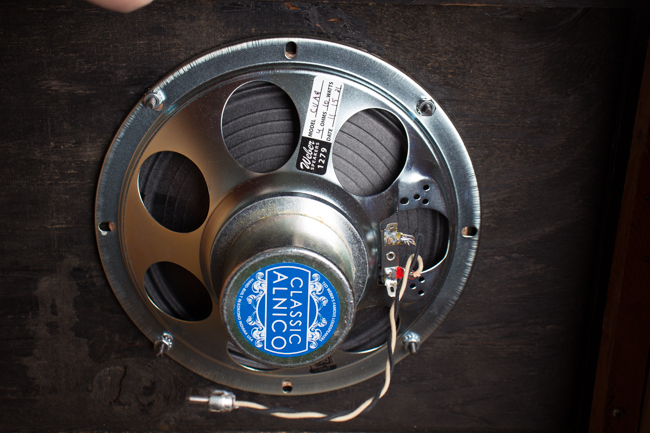 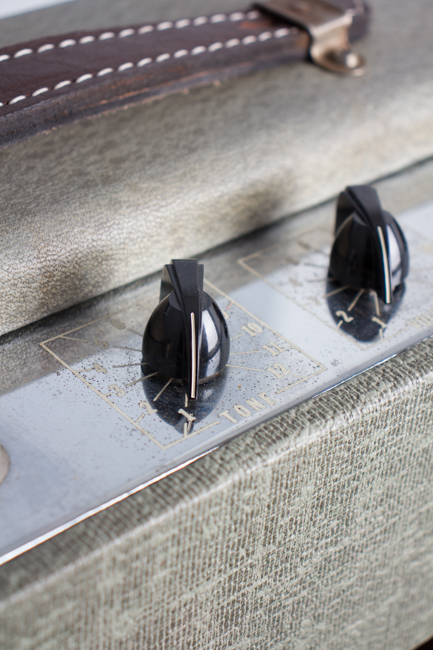 This great-sounding and rather rare little White-brand amp is one of the most obscure Fender products of the 1950's, intended as a secondary product line to sell to teaching studios. This was still a big market for Fender products at the time, especially student grade steel guitars and amps. So as not to undercut franchised Fender dealers in the same town, a special studio-only line (consisting of one steel guitar and amp model) was offered wholesale to studios only. The story goes that Fender plant manager Forrest White was not even aware that Leo had named this line for him until the nameplates started appearing at the factory!

The White Model 80 amp is similar to the period 5F2 Princeton, with a tone and volume control and driven by a single 6V6 power tube. It puts out around 5-6 watts into a single 8" speaker and has enough differences in its form factor and cabinet construction to give it a unique tonal character of its own.

This particular amp is a nicely restored example, with a tube chart stamped KC, indicating assembly in March, 1961. It carries a very low serial number and remains in very fine condition overall. The rather fragile and unusual lightly-speckled "frog skin" fabric covering is in very good shape for the age of the amp save for a few minor signs of wear, particularly around the edges and corners. The unique blue grille cloth is in great condition and has been repositioned and re-attached to the baffle due to a tear along one of the edges. The baffle is original and in great shape. The back panel is a reproduction with as closely matched and tinted covering as possible and the handle is a replacement as well. The faceplate remains in excellent condition with nearly all of the stenciled lettering intact and virtually no signs of corrosion.

Electrically, the amplifier is nicely original except for the speaker, which has been replaced with a Weber CV8. Both the power and output transformers are original, both made by Schumacher and marked 606-048 and 606-040, dating each to the 48th and 40th week of 1960, respectively. The fuse holder has been replaced with the correct style and a washer was added to support it due to an oversized hole drilled at one point. The amp has received our usual servicing including replacement of all electrolytics, cleaning of all sockets, pots and jacks, install of three-prong power cord and biased to spec.

This is a very rare and truly great sounding amp that starts out crisp and quickly slides into growly overdrive. The White "Higher Fidelity" Model 80 is a mostly forgotten part of the Fender story-amaze your friends with one of the coolest and most offbeat amps of the era that most players have never seen or heard before! Very Good + Condition.
×