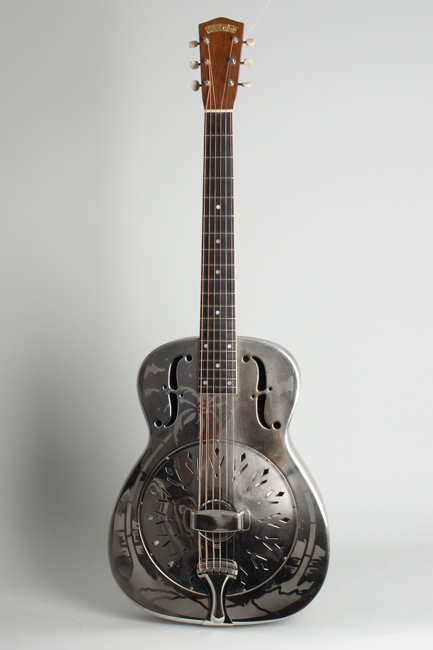 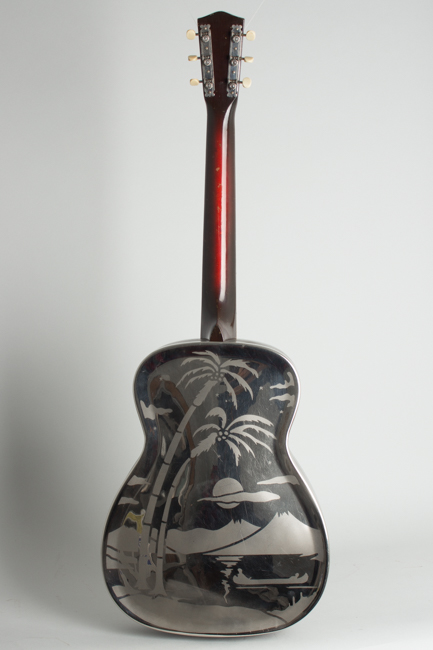 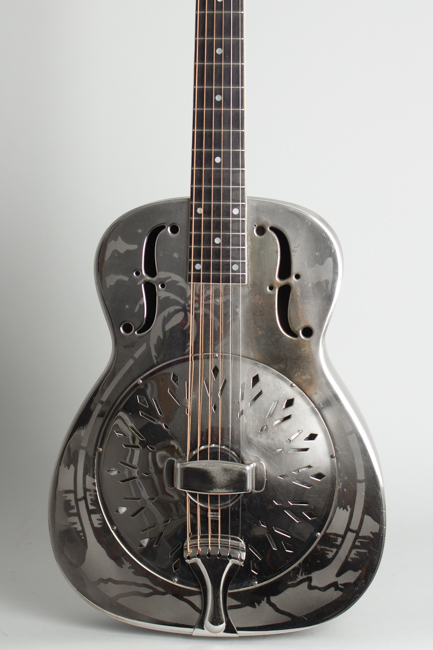 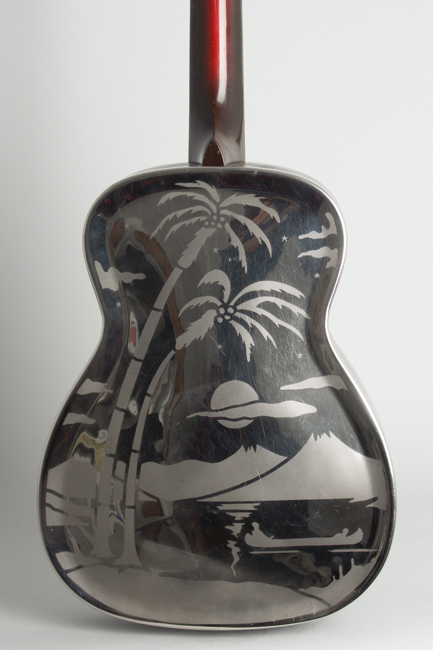 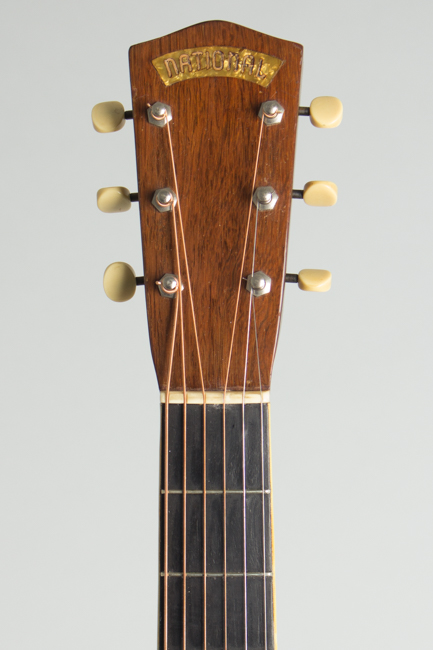 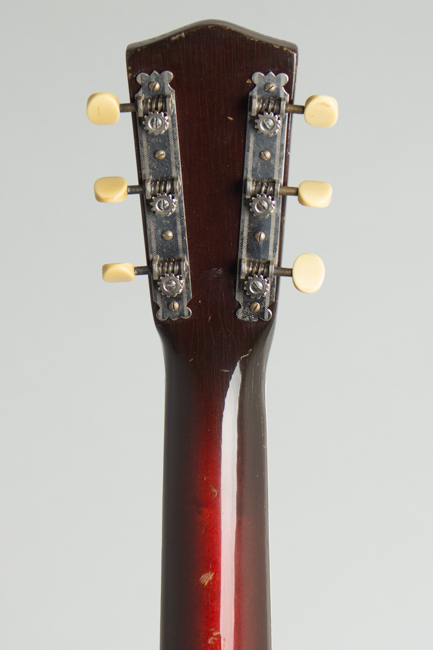 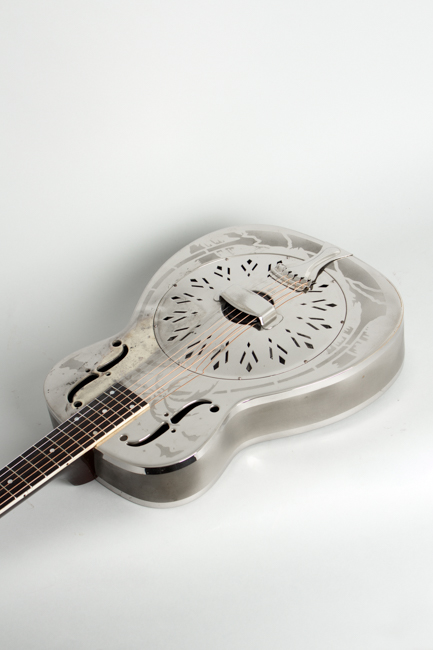 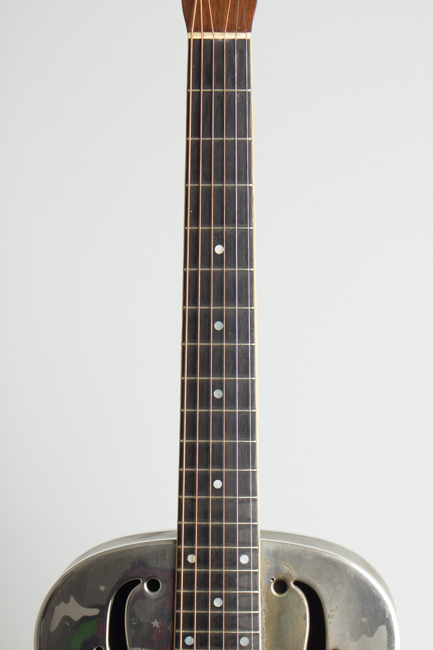 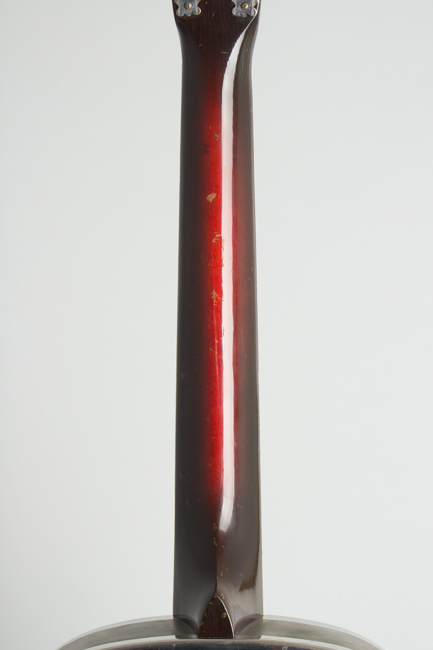 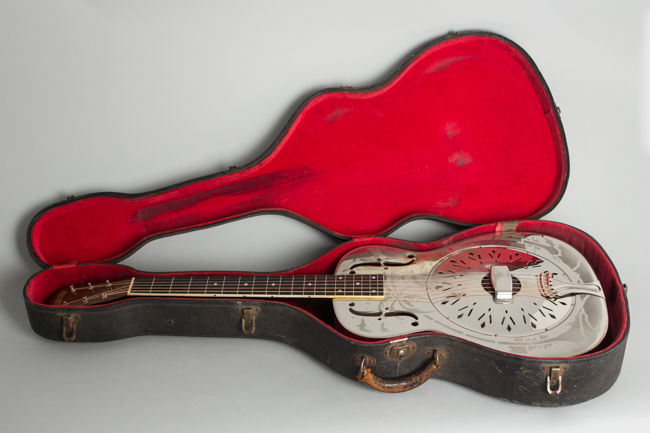 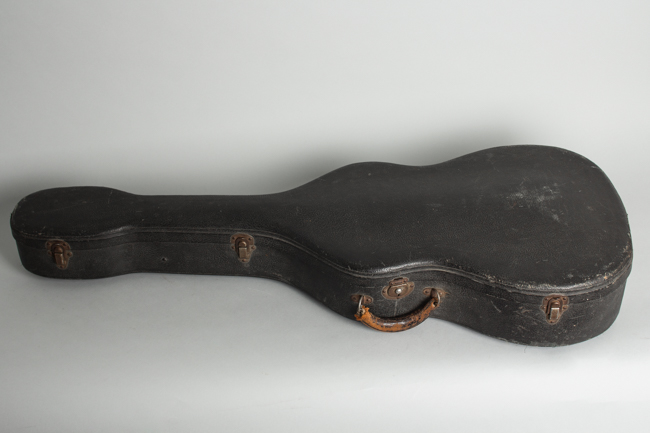 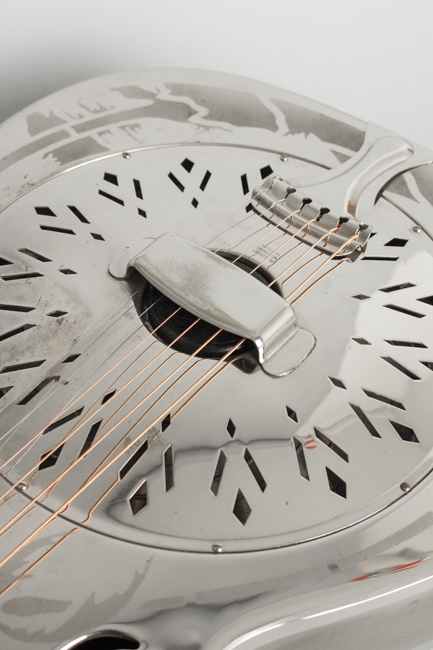 This is a slightly worn-in but great-playing and sounding 14-fret Style O from the mid-1930s, a time when this classic National model had been somewhat modernized from its original style. It is still a brass-bodied single-cone guitar with rolled-edge f-holes, decorated with a sandblasted pattern that features double palm trees and numerous clouds in the starry sky! The sunburst-finished poplar neck now joins at the 14th fret with a single-bound ebonized fingerboard with a 9-dot inlay pattern and the "ivory" grain in the binding running the wrong way...typical of National in this era!

The neck is a 14-fret design, rather chunky with a deep "V" contour and an arched "ebonized" fingerboard. The solid headstock has an inset pearl celluloid piece with an engraved National logo. The resonator coverplate is a later type typical of this period with small diamond cut-outs, nicknamed the "Chicken feet" design by collectors.

This is the Style 0 variant generally considered the "Dire Straits" model, due to use by Mark Knopfler in the 1980s and the iconic appearance of one on the band's "Brothers in Arms" album cover. There are a number of small variations in the cosmetics but for all functional purposes this is the same version. Some National aficionados consider this the ultimate Style 0, while others prefer the original 12-fret series. We think that both iterations can sound great, and this is a nice player with a well-rounded sound.

This Style 0 has had its 100,000 mile checkup, and while it shows some cosmetic wear is playing better than ever. The neck has been reset, with a graphite reinforcing rod added under the fingerboard and a refret with period style wire. All this was done with no finish added except a few small touch ups. Everything else on the instrument remains original including the cone, biscuit, tailpiece, coverplate, and tuners.

Cosmetically the finish has some general wear, some from play but mostly from the disintegration of the original celluloid pickguard, which is unfortunately nearly ubiquitous on these later '30s models. There is a spot under where the guard once sat where the plating is pretty much gone down to the brass with some spots of corrosion. The rest of the plating is relatively well-preserved with just typical scuffing and some scratches but no other notable loss. The neck finish shows some small dings and dents and a patched in piece of binding on the bass side.

This later '30s "Dire Straits" style model is actually rather harder to find than the early 12-fret Style 0; this is the nicest one we have had in quite some time. The sound is exquisite, with a deeper and sweeter tone than players weaned mostly on modern resonator generally expect. A lovely and versatile resonator guitar, fabulous for vintage blues sounds as most older Nationals are but with a unique tonal palette that can also range far afield from these roots...just ask Mark Knopfler! Very Good + Condition.
×