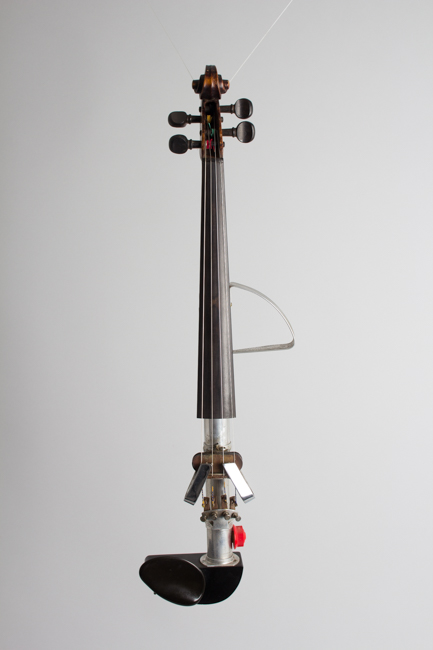 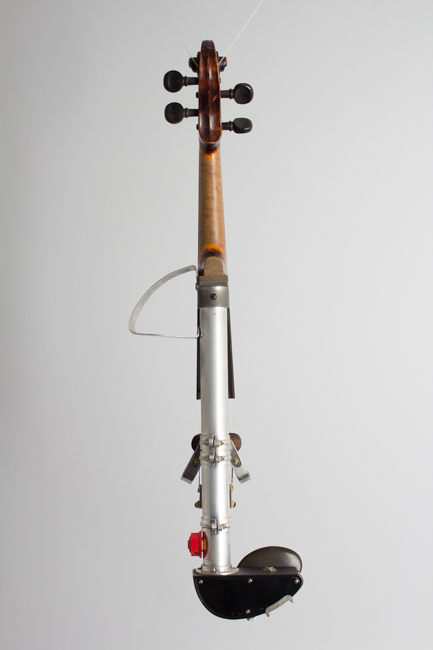 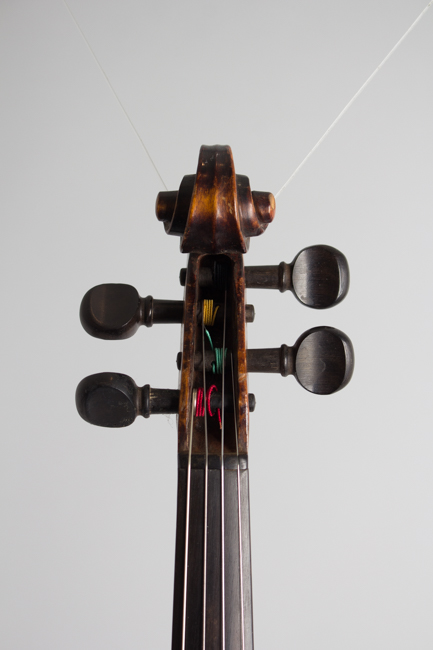 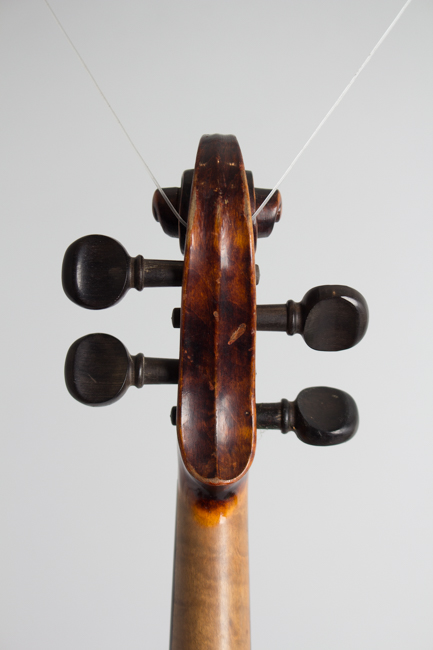 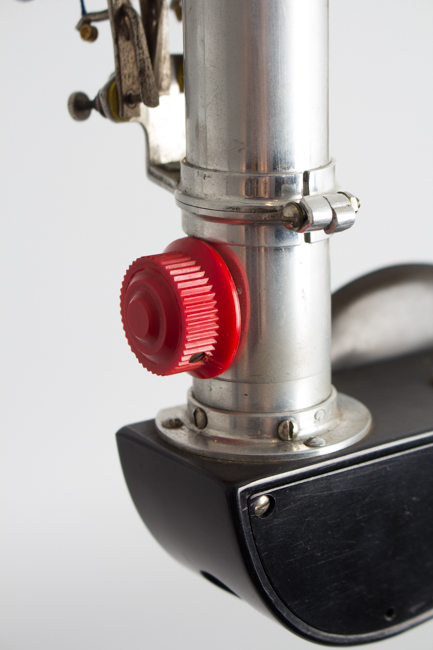 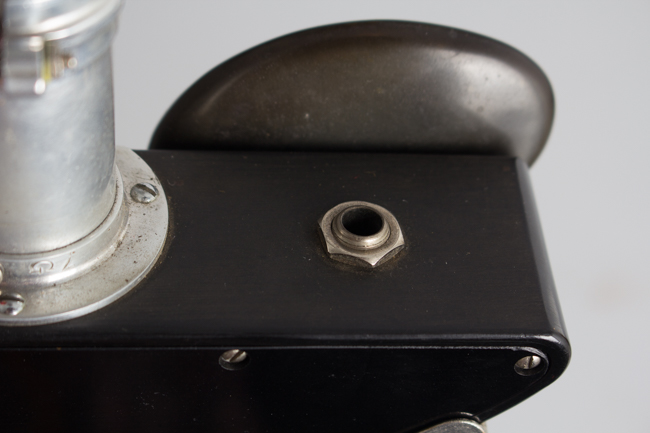 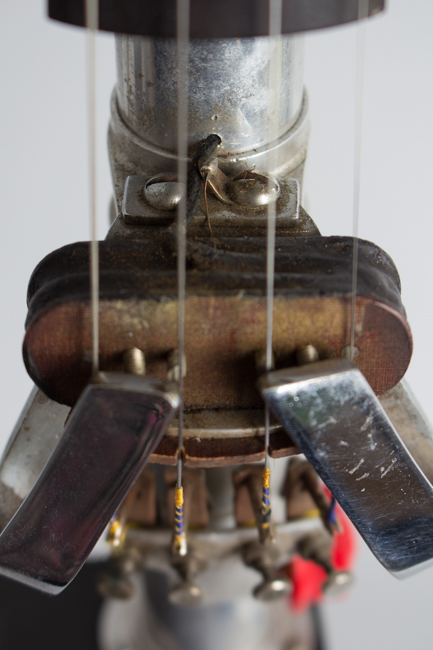 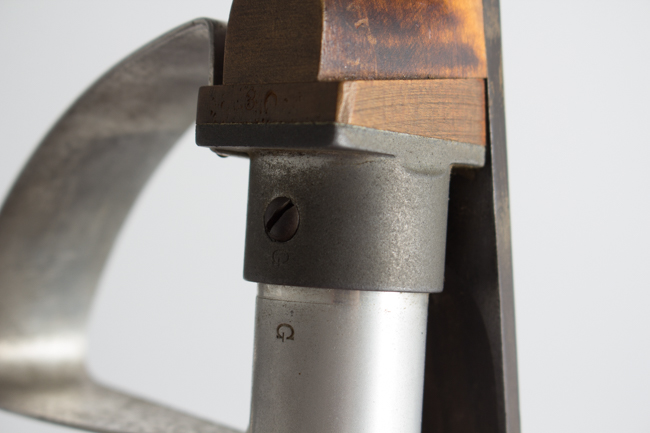 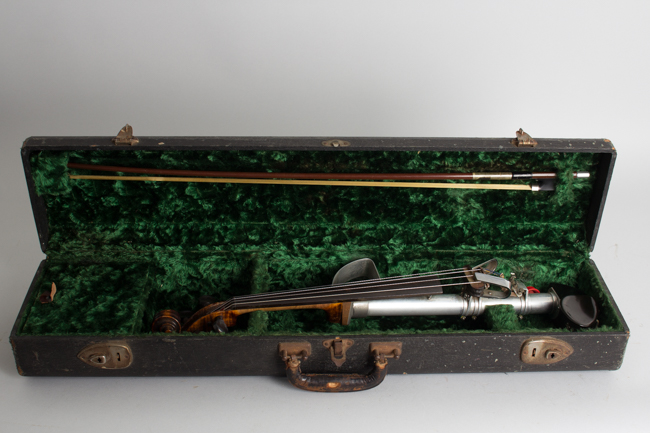 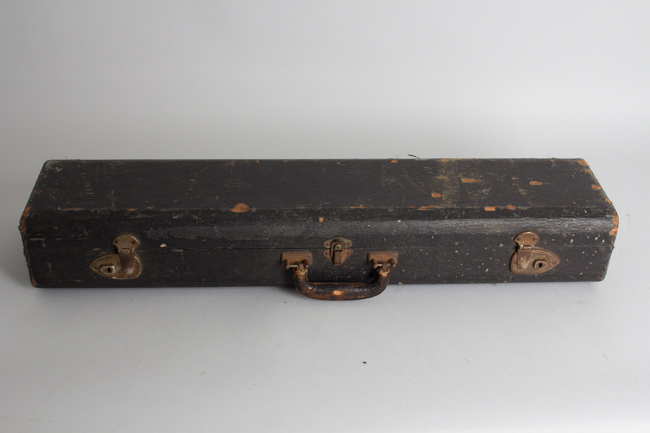 One of the rarest and most unusual American string instruments ever created, this second generation Rickenbacker Electric Violin was a product of the late 1930s but STILL looks out of time! The design is more radical even than the stylishly minimalist Hawaiian steel guitars that made Rickenbacker famous; this might well have confused even the most forward-looking violinist in 1938-9. With the body consisting of a tubular metal frame attached to the conventional neck and headstock, it resembles what is in the 21st century termed a "Steampunk" aesthetic, although when created it was simply a modernistic statement.

Rickenbacker/Electro designer George Beauchamp's original ambition was to create a whole family of purely electric string instruments. This never came to fruition, but besides a variety of guitars, at least the violin and bass appear to have been commercially produced -- albeit on a very small scale. Several "All-Electric" acts in the 1930s used a full outfit of Electro orchestral instruments, including violas and cellos, but commercial production of the bowed instruments appears to have been minimal. These became at best an experimental sideline to the company compared to the success of the Rickenbacker Electro Hawaiian guitar, which quickly became the market leader.

Beauchamp was a pioneer in using plastics and metal for musical instrument construction. Around 1930 he had experimented with Bakelite necks for National guitars, and then moved on to the first Electro steel guitars which were the cast aluminum "Frying Pans" of 1932-3. The earliest style Rickenbacker violin was an incredibly radical minimalist design molded in solid Bakelite, but with very few sold in 1935-6 it was an apparent market failure.

The idea was quickly revised so that by 1938-9 Rickenbacker was offering this entirely different Electric Violin with the tubular metal body mated to a conventional violin neck and headstock, likely bought in. It's possible the more conventional wooden neck was suggested by actual violinists who tried the first molded Bakelite design. That used a headless layout with the tuners on the body (presaging Steinberger by almost 50 years) and had unfamiliar balance and handling characteristics. On this second version at least the neck itself has a familiar wooden feel, even if the balance is still eccentric.

This tubular metal instrument is still far from a conventional violin. The body is an aluminum tube with the pickup and fittings attached by slim brackets encircling it. The patented Rickenbacker horseshoe magnet pickup is mounted just ahead of the bridge with the slim magnet pieces curving up from behind. It must have been a major design effort to create a over-string pickup that would not restrict bowing to any great degree.

A single volume pot is mounted towards the rear of the "body" operated by a bright red "flying saucer" knob. Behind this is a small enclosed Bakelite "box" under which carries the forward facing jack and chin rest. An unused jack port is mounted on the back rim of this section in what would have been about the worst possible place to attach a cord, directly in the player's face! There is a bent metal bracket mounted where the upper bout of the body would be, mimicking the feel of the non-existent sound chamber so the player does not get lost on an endless neck.

Despite the many unconventional aspects, this instrument is fully functional and actually sounds quite good. The tonality is definitely electric, but the famous Rickenbacker pickup works quite well in a bowed context. The violin is still housed in the original box-like hard shell case lined with green plush and long enough to accommodate a bow, a need which Rickenbacker had apparently forgotten to consider in the 1935 models.

While it looks rather like something Flash Gordon might have encountered in Mongo, this is a practical and well-designed instrument nonetheless, an enduring statement of Deco modernism and one of the most striking violins ever designed.

This instrument remains in completely original and playable condition with only some minor wear. As noted, there are two jack locations but this appears to be a factory modification. There is some light wear overall, primarily to the surface of the metal, most notably to the bent bracket where the player's hand contacts the phantom body. The case has more wear externally but is fully functional, and a period bow is included. Overall a spectacular example of this exceptionally rare piece; a true museum-quality instrument. Excellent Condition.
×