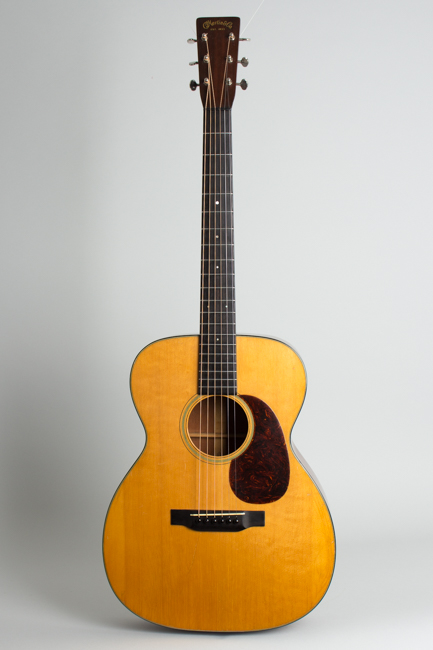 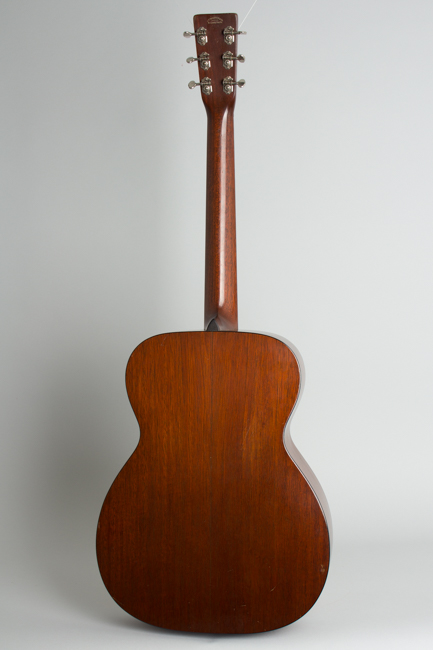 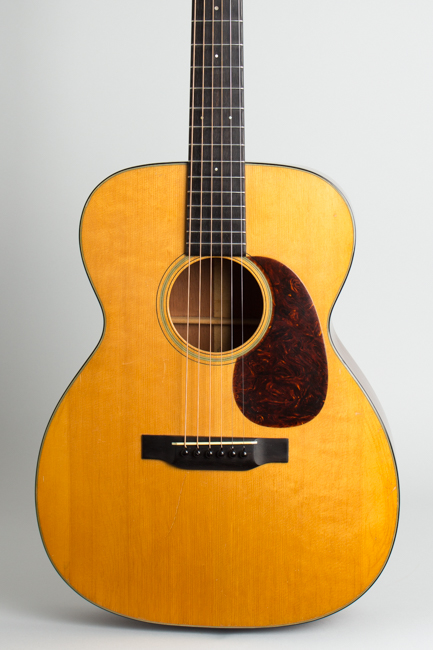 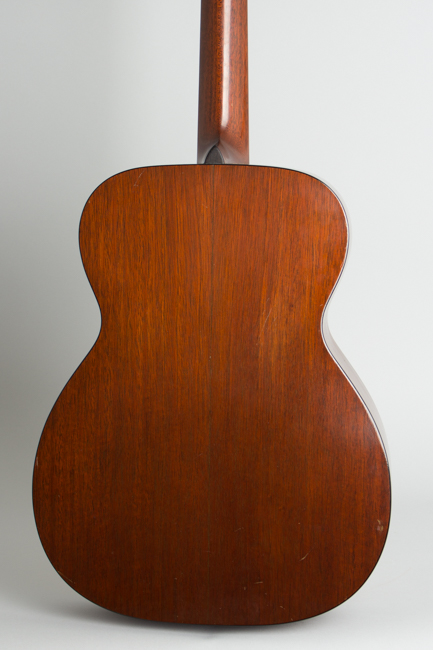 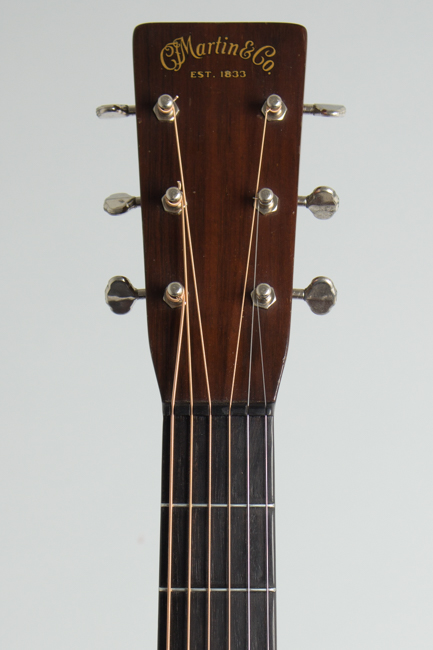 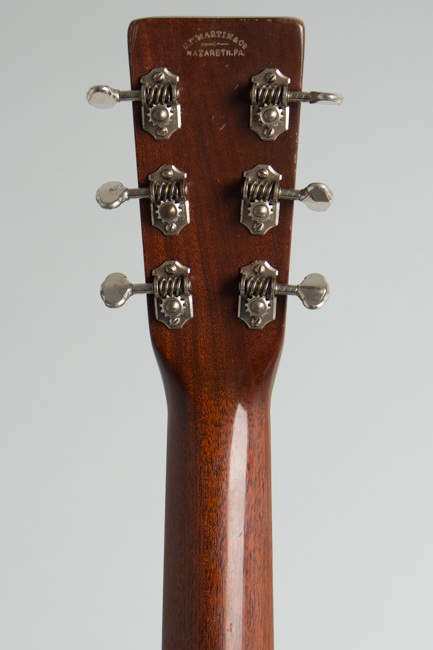 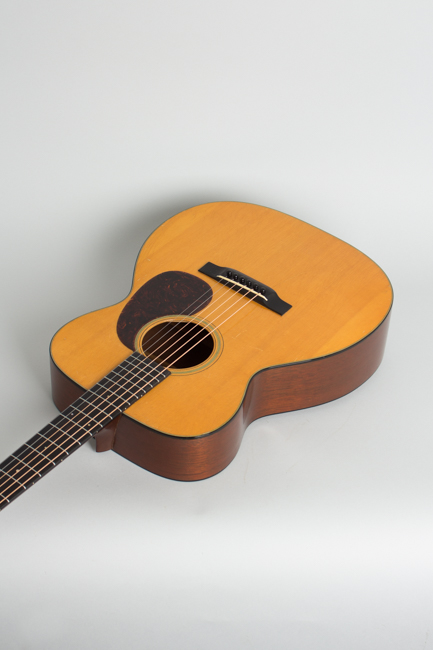 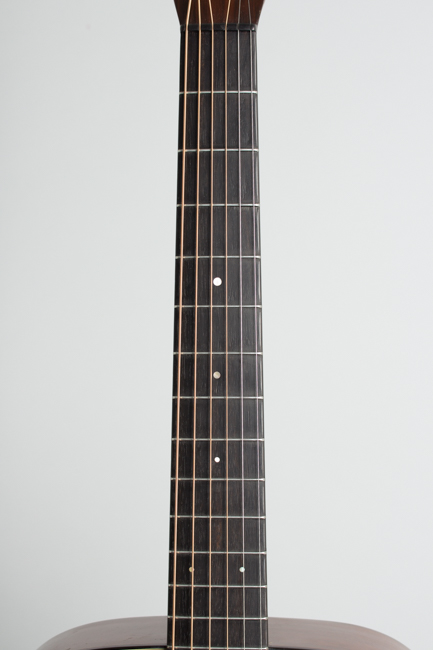 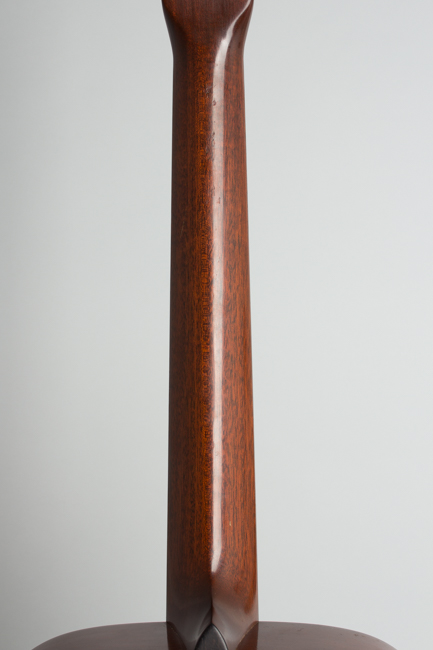 To many players and Martin fans, prewar examples of the 000-18 constitute one of the company's most propitious and beloved combinations of wood, wire, and inspiration. This guitar was built in 1934 and remains a wonderful instrument, a real testament to the enduring quality of these true "Golden Age" Martins. The light mahogany body coupled with a scallop-braced Adirondack spruce top makes for a very responsive guitar; the 15" wide narrow-waisted 000 size body contributes both depth and clarity to the sound. This first-quarter-of-1934 guitar still retains the longer OM scale length that contributes some extra power and punch to the formula.

The 000 sized mahogany body with a 14-fret neck joint was introduced as the OM-18 in 1930, as a less expensive alternative to the rosewood OM-28 already in production. The combination was so successful that after 1933 nearly all Martin guitars were being built in this new "Orchestra Model" format, so the OM designation was dropped, and this model was simply called the 000-18. The original OM-18 used a long 25.4" scale length, but Martin somewhat inexplicably changed this to slightly shorter 24.9" scale in later 1934. This guitar predates that change, so it is technically an OM-18 in all but name.

The 14-fret 000-18 has remained one of Martin's mainstays since the early Depression era. While not a particularly expensive guitar by 1934 standards, listing at $55.00 (plus case) the instrument still represented a substantial investment to most period players. This is not a flashy guitar; the trim is discreet with tortoise celluloid for the pickguard and the body binding and a simple multiply sound hole ring. In classic Martin style, the elegant understatement speaks for itself. Despite its lack of flash this was always a fully professional instrument and became very popular with radio entertainers, most obviously the country acts common in the Southeast.

This example is one of a total of 326 000-18s shipped out in 1934, most of which were the new shorter scale version. Besides the slightly longer neck it incorporates typical pre-war features including lovely mahogany on the back and sides, a superb straight-grained Adirondack spruce top, ebony fingerboard and bridge, and tortoise celluloid pickguard and body binding. The neck is mahogany with a fairly slim profile with hints of a "V" along the spine that becomes more pronounced as it gets closer to the body. The original bar frets are still fully intact. The fingerboard inlay is small mixed size dots and the tuners are the earliest version of the individual Grover G-98s with "butterbean" buttons and riveted shafts.

Besides the longer scale neck the most notable feature of this 1934 000-18 is the very light scalloped bracing under the top. This is built in what is now termed the "Advanced" or "Forward shifted" position, although at the time it was just the way Martin had designed the OM top. Later in the 1930s, the X brace was moved slightly farther back towards the bridge to stiffen that area, as with the heavy strings common at the time Martin was already seeing a lot of warranty repair. While all scallop-braced 000s are very fine-sounding guitars, many players feel this earlier pattern gives the guitar a deeper response, especially attractive when combined with the characteristic bite of an Adirondack top and the OM scale neck.

This 000 appears to have seen surprisingly little use since new; it remains in excellent-playing condition and sounds absolutely sublime. While it is an exceptional fingerpicker's instrument -- something the OM is considered unmatched for -- it also has a lot of punch and superb clarity as a straight rhythm machine, played in open or "chop chord" style. That's how many were used in the Cowboy and "Hillbilly" radio bands of the 1930s, anyway. Whatever the style of music one might prefer, mahogany flat-top guitars simply don't get much any than this.

This is an absolutely superb example of this spectacular Martin guitar, in a state of preservation we rarely see anymore with flat-tops of this vintage. The finish shows typical light wear overall with some fine checking and small dings, scratches, and dents. There is very little pickwear, and except for one notable scratch behind the bridge, the top is very clean. Amazingly there are NO cracks at all, not even the almost inevitable one by the pickguard edge...almost miraculous for a Martin of this vintage.

Very few of these early Depression-era 000s have survived 80+ years in this state of preservation. The instrument plays effortlessly and the sound is fantastically detailed -- it has plenty of volume, and even played softly responds immediately to the lightest touch, every note shimmering with a life of its own. Simply a fantastic example of one of the most sought-after of flat-top guitars, in a worn (slightly later) period HSC with the name "Mousey" added in appropriately tiny letter tape letters by the center latch. Overall Excellent + Condition.
×