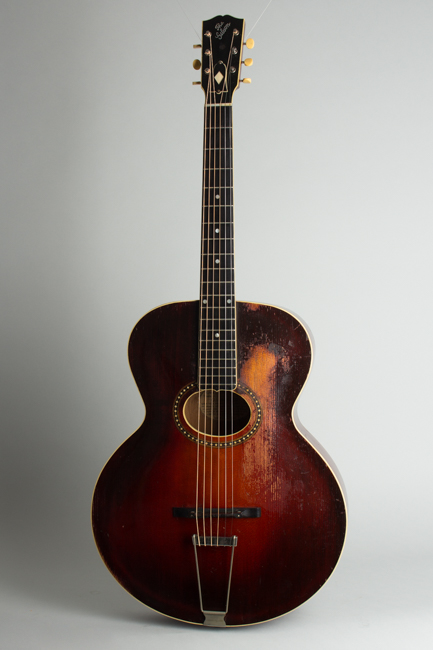 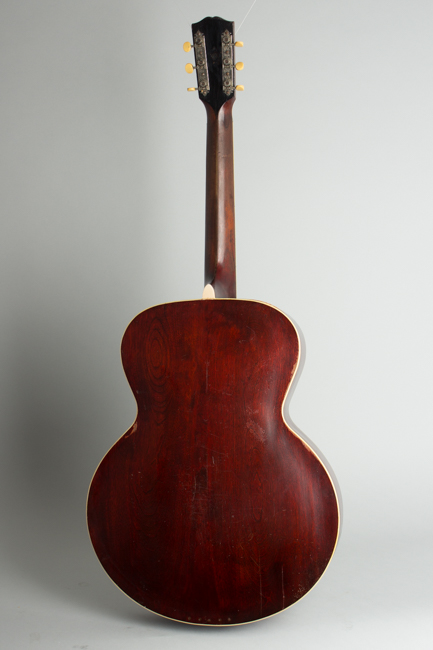 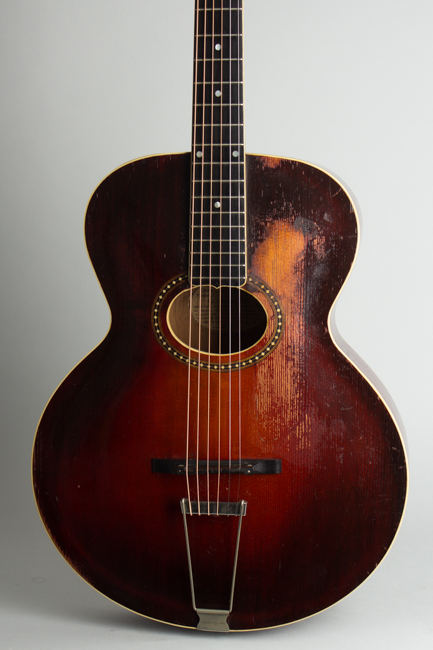 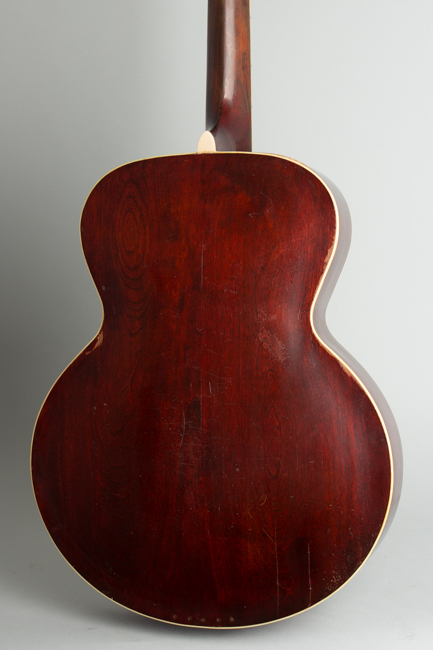 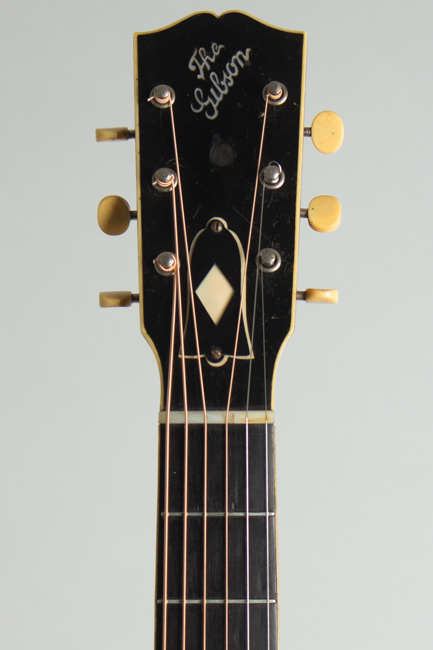 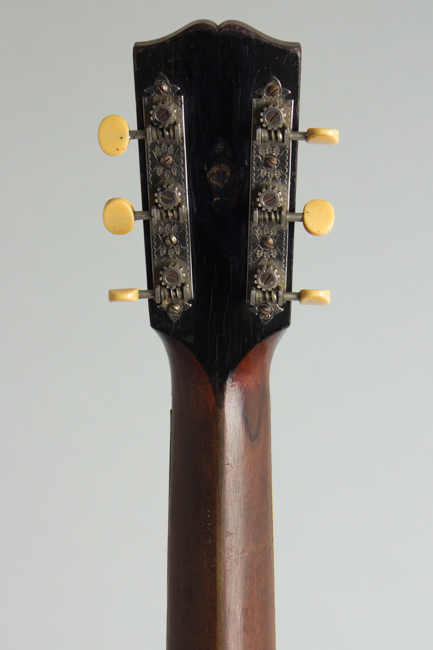 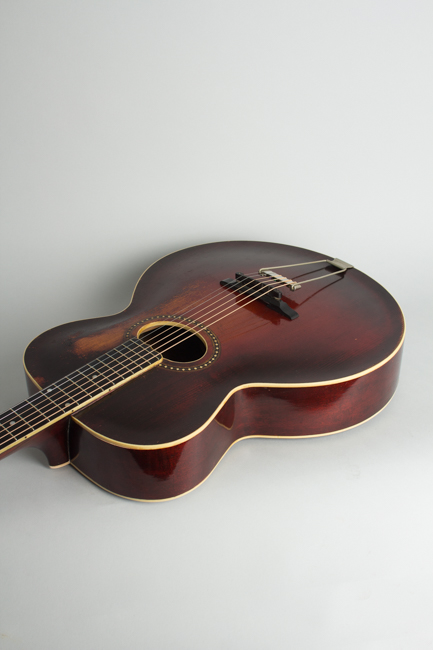 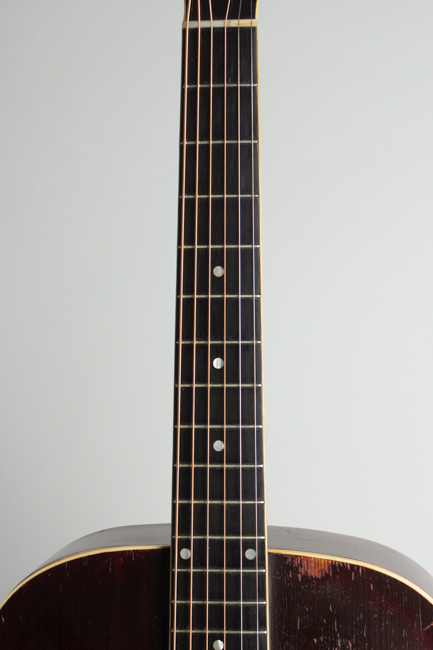 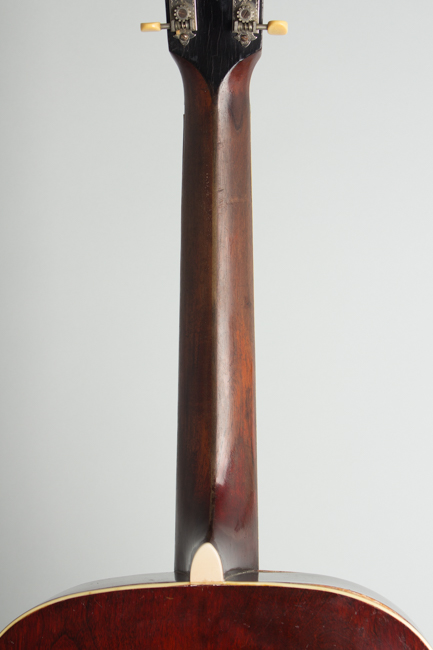 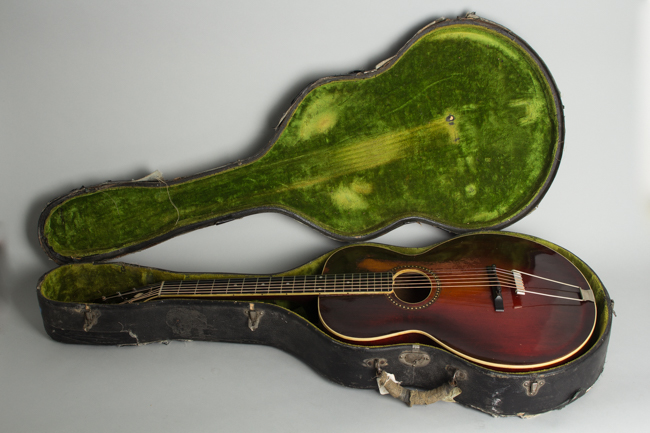 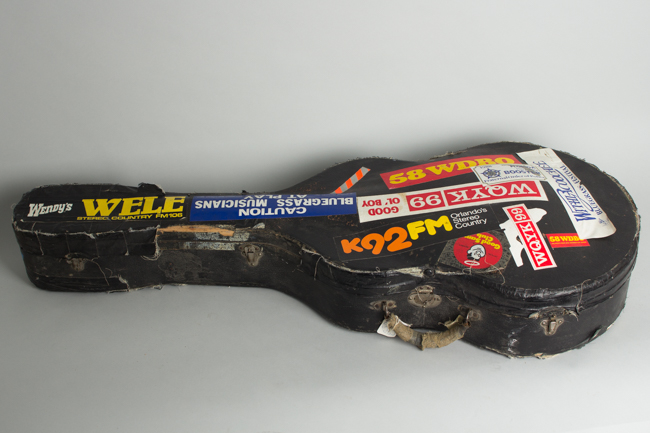 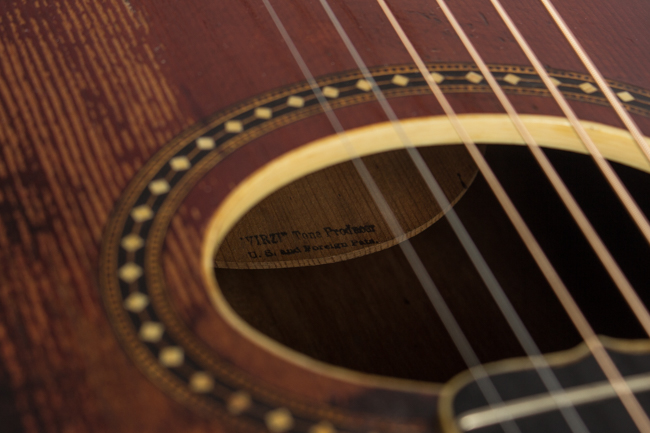 This is a very interesting, fairly rare, heavily played and mostly just way cool arch-top guitar -- an L-4 from the "Loar Era" at Gibson. It includes one of Loar's most oddball obsessions, the "Virzi Tone Producer", a flat wooden disc mounted under the top. It is very well used with the reminders of one ancient modification but plays and sounds great with a wonderful vibe. The factory order number indicates it was built in later 1924 just before "Master Loar" left the building, and the serial number suggests was shipped out in early-mid 1925

The guitar is generally similar to earlier L-4s with a red sunburst finish and a wide, chunky "V" profile neck. It has several "Modern" Gibson features introduced around this time including the adjustable ebony bridge, adjustable truss rod in the neck and solid tailpiece bar in place of the earlier pin variant. The slanted "The Gibson" logo sits on its single-bound peghead above the then-new truss rod cover. The wide oval sound hole is bound bordered with an elaborate diamond marquetry motif.

The Virzi Tone Producer was marketed by Virzi Bros. violin company in New York. This flat thin spruce disc was mounted under the top and supposed to boost vibrations in the sound chamber, supposedly enhancing harmonic partials. Championed by Loar, it was offered by Gibson as an optional extra cost feature at the time. The Virzi was mostly seen in the expensive Gibson Master Model mandolins, and it is very uncommon to find one in an L-4.

While the $150 L-4 was not Gibson's top-line guitar in 1925 only the Style U Harp Guitar and new-for-1924 Master Model L-5 exceeded it in price. With a large 16" wide body and carved top and back, it was unlike any other guitar available at the time. Martins of this era were still mostly gut-string instruments, and the L-4's combination of steel-string power and punch was unique.

Many early jazz greats used similar L-4s extensively into the late 1920s, including Eddie Lang and Freddy Guy with Duke Ellington's Orchestra. Besides being something of a rarity, this Loar-era L-4 is a powerful-sounding guitar with a big open tone compared to earlier Gibsons. There is an old small paper label attached to this guitar's case handle identifying it as belonging to one Ron Reinhardt (probably not the jazz keyboardist of that name) and if the stickers on the case lid are any indication he took this guitar along a country and even bluegrass festival path. Wherever it has been this is a cool and fairly unusual old Gibson with some great stories to tell.

Overall length is 39 1/8 in. (99.4 cm.), 16 in. (40.6 cm.) wide at lower bout, and 3 7/16 in. (8.7 cm.) in depth at side, taken at the end block. Scale length is 25 in. (635 mm.). Width of nut is 1 3/4 in. (44 mm.).
This is -- obviously -- a heavily played and well-worn guitar. It also bears the marks of an ancient and oddball modification: for a time, at least, it was played as a 7-string instrument. There are extra notches in the original bridge and pearl nut for a doubled "G" string, an unusual addition currently championed by Byrds founder Roger McGuinn on his Martin signature model. The most notable reminder is filled hole in the center of the headstock where an old two-tab Grover banjo tuner was once fitted. There are two small filled screw holes on the headstock rear as souvenirs as well. We have only seen this a few times and can only wonder who so modified this once rather expensive Gibson in this manner!

Except for this eccentricity (which is not overly conspicuous) and the pickguard having gone missing long ago (evidenced by wear where it used to be) this guitar remains surprisingly original. The lovely engraved-plate tuners, pearl nut, adjustable bridge and "wrap over" tailpiece are all still intact and functional. The truss rod cover is an unusual two-layered piece with a diamond cutout in the center of the black top to reveal the grained ivoroid underneath. This is not a standard fitting but appears factory or at least period. Even the original wood endpin is still present.

The finish shows wear overall but mostly to the top, where the area below the fingerboard and soundhole have been heavily strummed into the wood. There is an old ossified tape mark in this area as well. There is some very old topical touch-up here and on the back of the headstock, but otherwise the thin early nitro finish is original. The back of the neck is fairly well worn down to the wood, but most of the rest of the original lacquer is intact.

There are a couple of neatly closed back cracks to the back edge of the lower bass bout. The guitar shows no other cracks. There are marks along the back at the rim where it looks like five small pins were added to help secure the back to the tailblock and touched up long ago, or something. The rims show no shrinking or separations.

Maybe it's the sheer amount of playing time it has seen but this is about the best sounding of these 1920's L-4's we have had, with a less "archaic" and more open tone than most. Maybe it's the Virzi, though history generally suggests not! The neck is nice and straight with an excellent angle, the truss rod still works perfectly and the original frets are very thin wire but surprisingly intact and playable. The original HSC is amazingly still more or less intact and functional, with some duct tape edging and festooned with old stickers on the lid. This guitar is definitely not for the "clean freak" but is still a very fine and definitely vibe-rich instrument 95 years along! Very Good Condition.
×