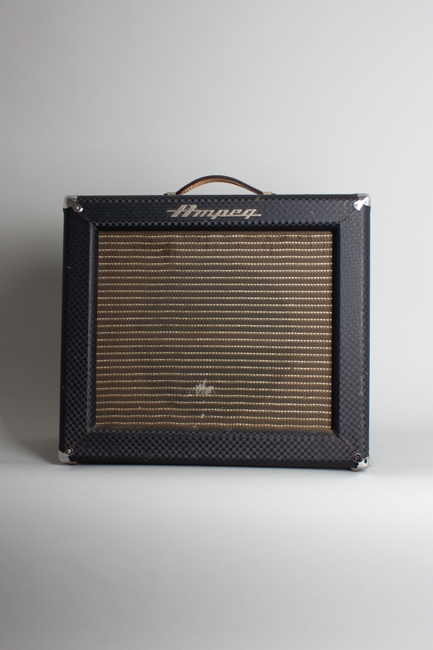 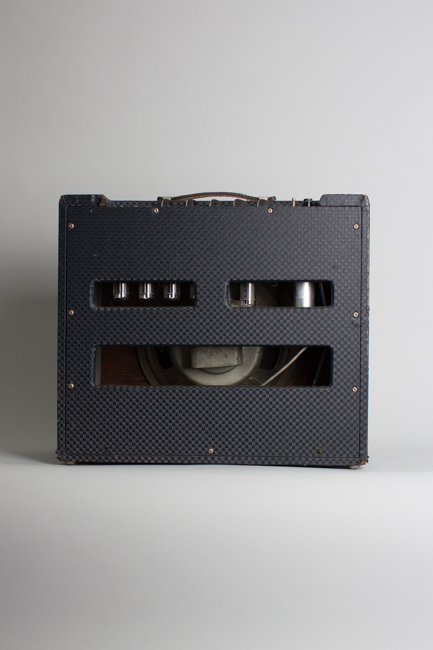 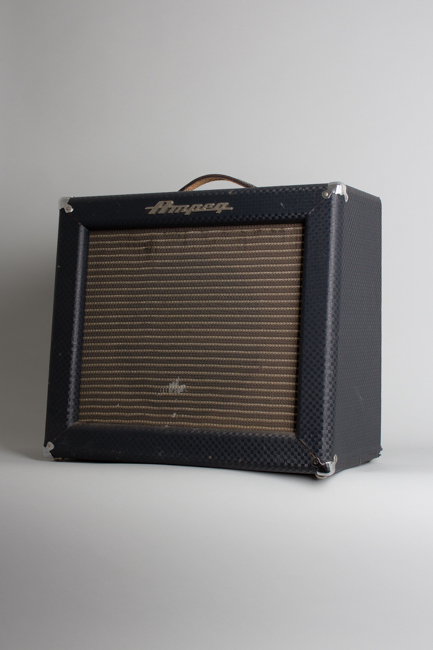 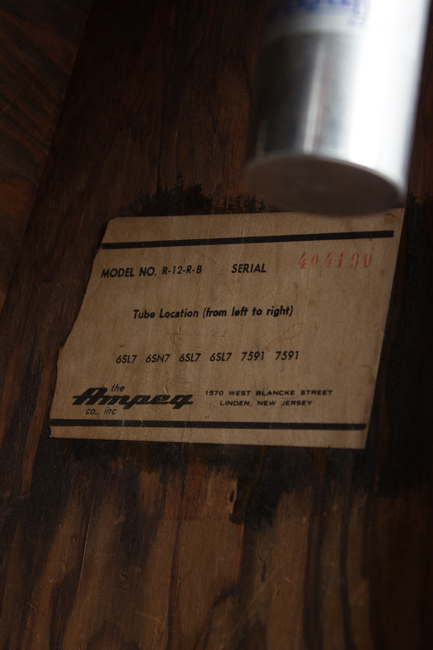 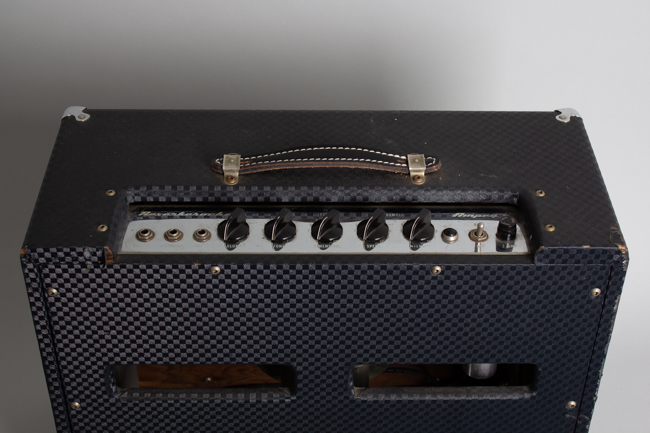 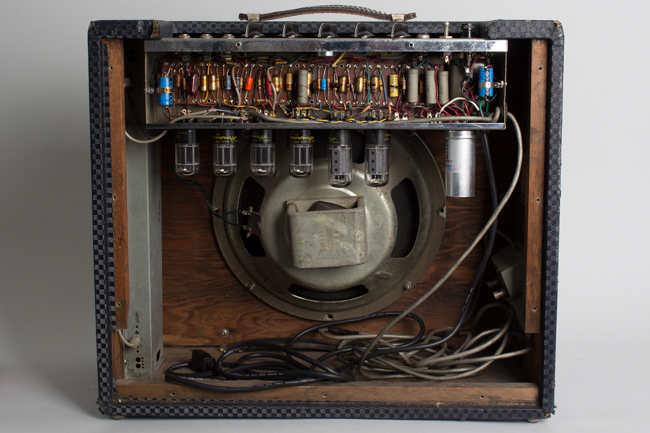 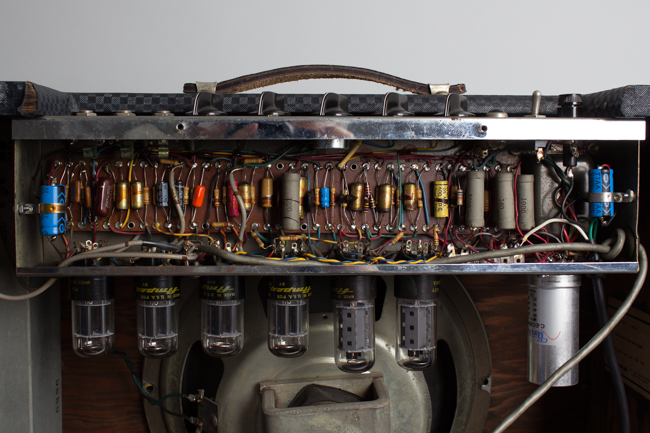 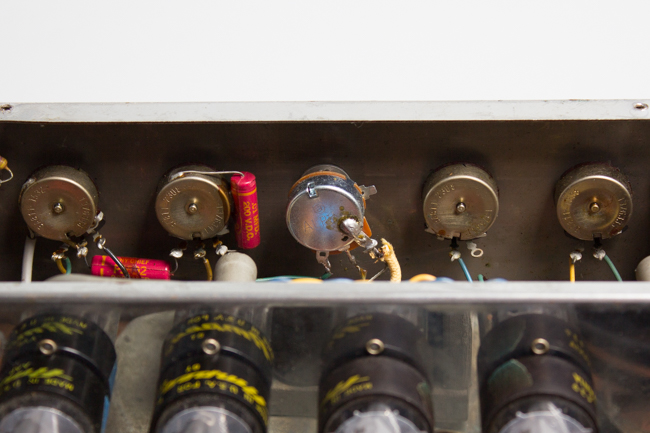 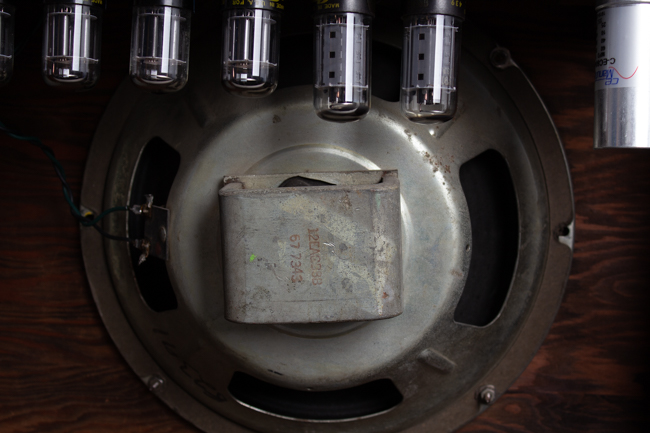 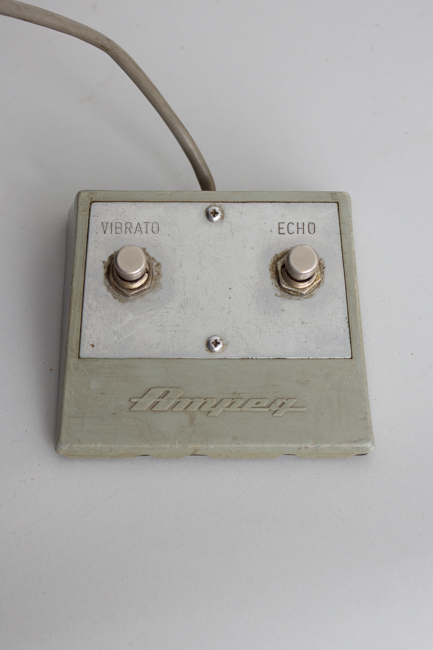 The R-12-R Reverberocket is a great-sounding mid-'60s Ampeg combo creation, with a somewhat brighter and twangier tone than many earlier models from the New Jersey based company. This blue-check Tolex covered 1964 example is not as hot-headed as the 6V6-equipped version; the dual 7591 output section stays a fair bit cleaner than that counterpart. It is still the earlier design with controls on the top rear like a 1950's Fender; around 1965, the Reverberocket II would be redesigned with a front-mounted panel like the newer Fender amps. It features three inputs marked for guitar, accordion and microphone with master volume and tone controls.

The reverb and tremolo circuits of the R-12-R are particularly lively, and have long been considered the amp's most well regarded sonic feature. The reverb, which Ampeg called "Echo", has a "Dimension" control for the lush and watery effect these amps are known for, as well as "Speed" and "Intensity" controls for the on-board tremolo. The two 7591 power tubes put out around 15 watts in push-pull into a 12" speaker.

This model makes for an excellent general purpose amp with a different tone than the more common Fenders; they overdrive on a different curve with a slightly trashy edge perfect for surf, instrumental rock and roll and garage sounds. These Ampeg amps were the standard east cost rig in the 1960s for thousands of players both amateur and professional and seem undervalued today compared to many other period units.

This amp is in excellent shape overall, considering is over 56 years old. The navy-blue "diamond" vinyl covering is beautifully intact with only a few minor scuffs around corner areas. The faceplate is clean with minor wear and nearly all the stenciled lettering is intact, save for a few small spots. The grille cloth is in good shape overall with a bit of what looks like a white paint stain in the lower-center area. The amp retains the original reverb (or "echo") and tremolo footswitch, mounted inside the cabinet opposite of the reverb tank. The handle looks like a newer correct replacement.

Electrically, the amp remains nicely original. The speaker is original and bears the stamp 677-343, dating it to the 43rd week of 1963. All pots date between the 38th and the 41st week of 1963. The reverb control pot has been replaced. The amp has received our typical servicing and maintenance including replacement of all electrolytic caps, a grounded 3-prong power cord, cleaning of all sockets, pots and jacks and biased to spec. and sounds lovely. Excellent Condition.
×