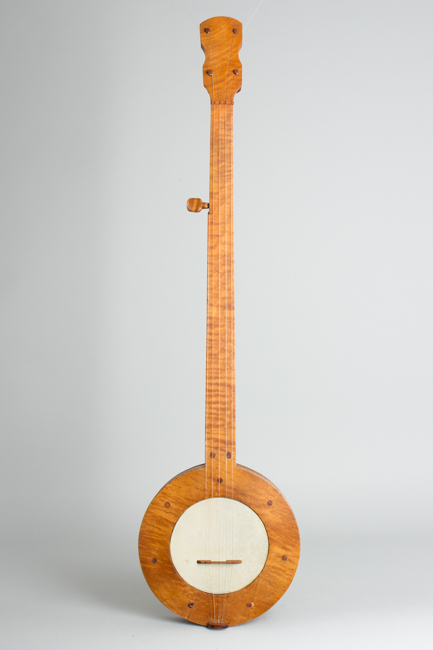 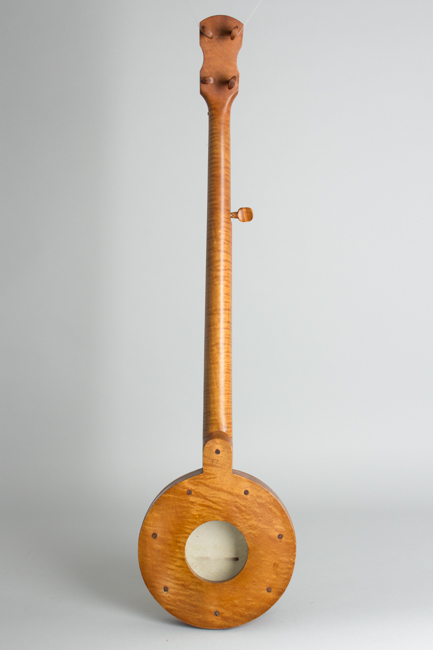 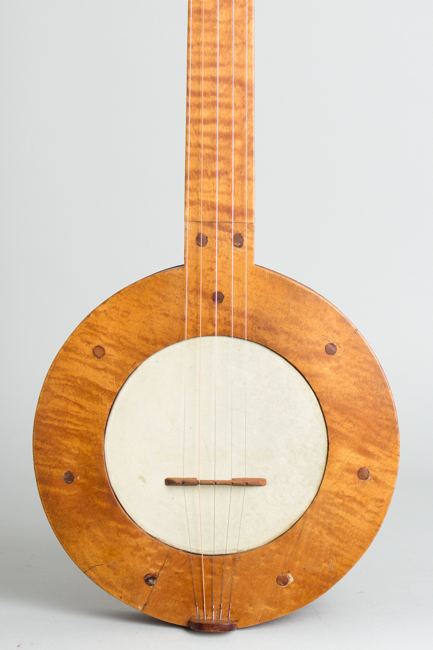 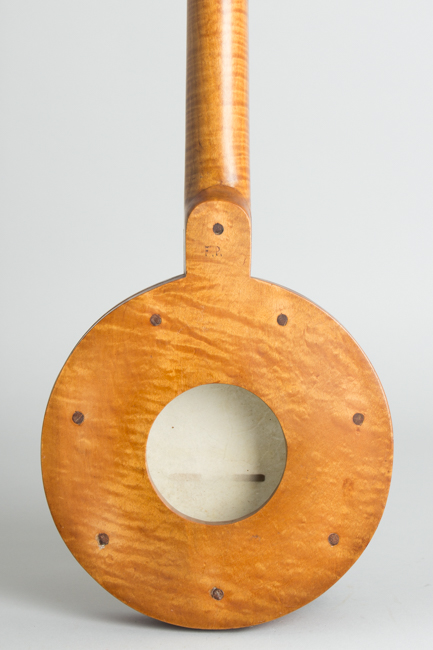 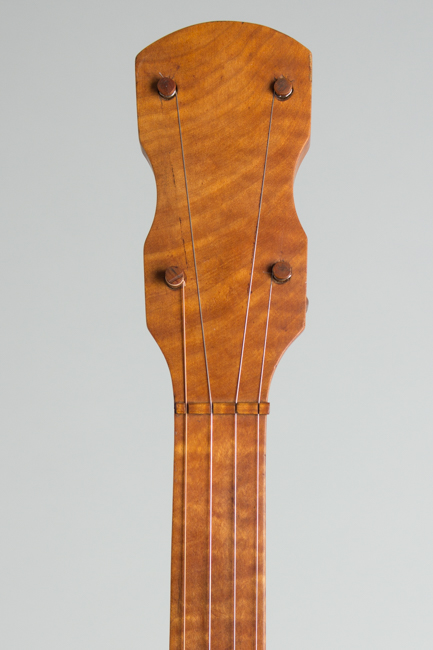 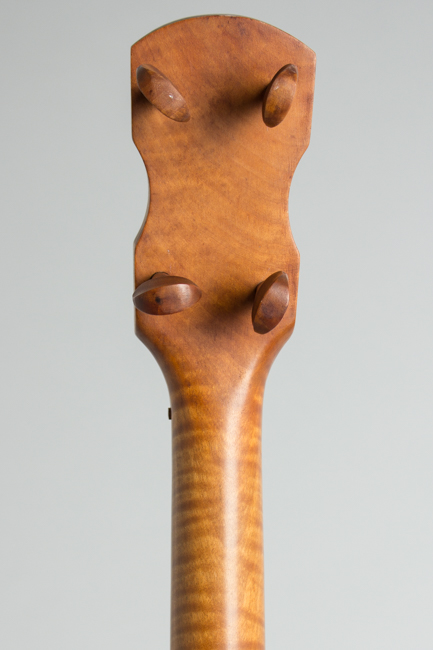 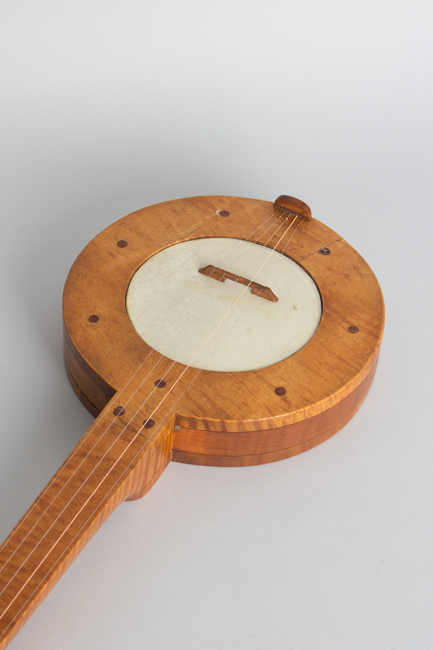 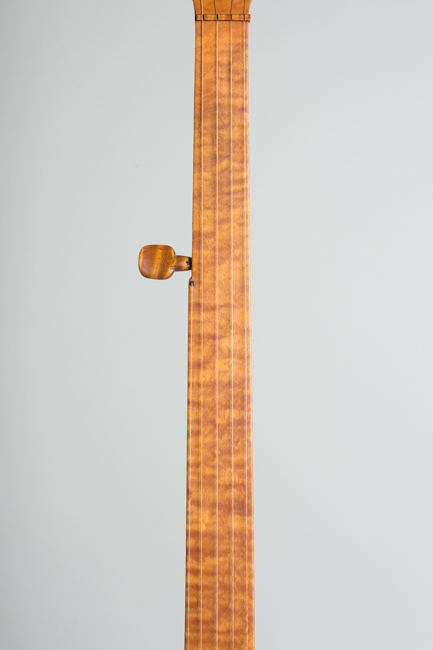 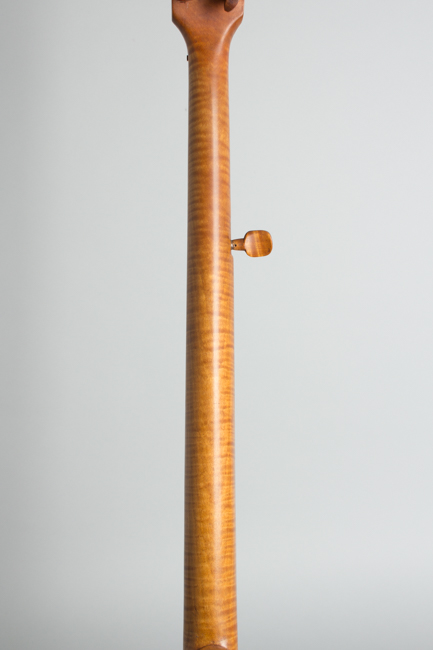 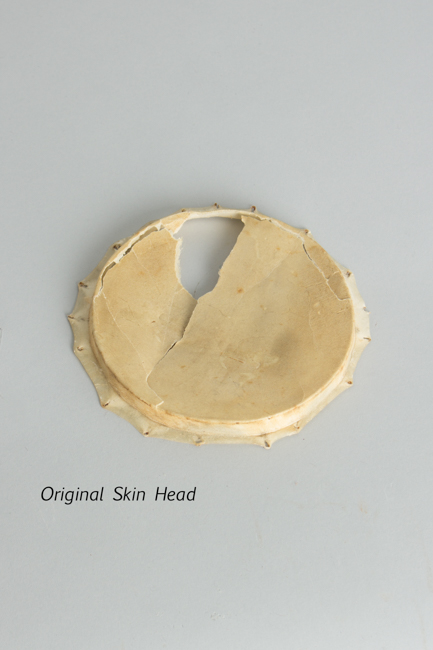 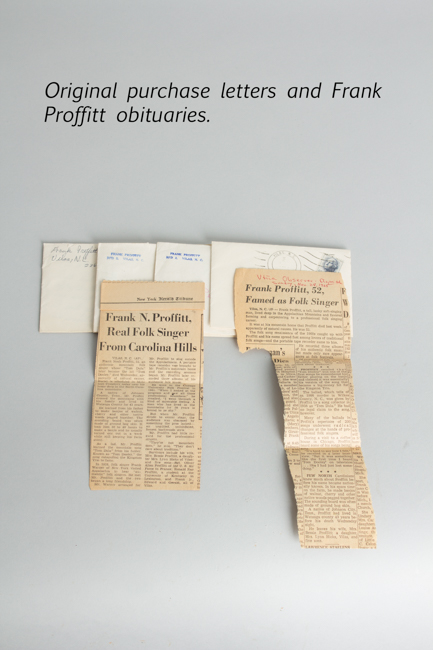 This beautiful and unusual instrument is a completely handmade "Mountain banjo" by the celebrated maker and player Frank Proffitt of Vilas, North Carolina. This style of handmade fretless "Mountain banjo" was a specialty of the region of North Carolina where the Proffitt family lived. When Frank Proffitt Sr. began making banjos and dulcimers some of the area folk could not afford commercial banjos, no matter how basic, so he sold them locally. Proffitt's design was functional and economical; using hand tooling and locally sourced materials he crafted instruments well-suited to the traditional songs and ballads still played in the mountains. At first these instruments saw mostly local use, but by the later 1950s Frank did begin selling a limited number of his handmade banjos and dulcimers to players outside the region seeking their unique character.

This banjo was ordered by a young folk banjo enthusiast attending college in upstate New York in November 1964. It was purchased directly through the mail and a set of handwritten letters from Proffitt (including a canceled deposit check!) is included documenting the order. Sadly Frank Proffitt passed away at age 52 in November 1965, just about a year after crafting this instrument. His son Frank Jr. continued building after his father's death in 1965, but most enthusiasts feel the original Proffitt Sr. instruments are the finest specimens. This is a genuine Proffitt Sr. with his initials incised into the heel, and has remained with the original owner since it was received in 1964. It is very rare to find an authentic original Proffitt banjo for sale, let alone one with provenance to the original order from the maker.

This banjo is built with a beautiful one-piece curly maple neck with a fantastic grain pattern and a comfortable deep "U" profile. The body is built of sections of maple, with a piece of 6" stovepipe inside to hold the (originally) possum skin head. It is fretless with no markers on the fingerboard and hand-carved wooden friction pegs and tailpiece. There is a traditional school of playing that these banjos excel at; the sound is more intimate than a more standard factory instrument, with less overring but surprising volume when played hard. Authentic examples of these banjos rarely come up for sale; this hand-wrought "Mountain banjo" is playable Americana at its most basic and beautiful.

Frank Proffitt Sr. is not only renowned as a builder, but as a folk performer who made a major contribution to American musical history. Collectors Frank and Anne Warner traveled to Beech Mountain in 1937 and recorded Proffitt singing the local ballad "Tom Dula" and other tunes on the banjo and dulcimer. Subsequently Alan Lomax published the song in his "Folk Songs of North America". It was through this that the Kingston Trio found the song, which as "Tom Dooley" became a massive hit and effectively kick-started the folk revival of the early '60s. Proffitt himself ironically never profited from this, and in interviews allowed he "felt he had lost something" seeing clean-cut young performers proffering their streamlined versions of the old mountain ballad. While Frank Proffitt himself rarely performed far from his home of Vilas, NC, his music and instruments have left an indelible mark on American folk culture.

This instrument has no case (they came in a handmade bag, if anything) but includes a fantastic package of documentation, including several letters from Frank Proffitt confirming the order at a price of $60 and including the cancelled check for the $20 deposit. Proffitt informs the buyer that due to some "forgetful" customers, he must now collect the full amount in advance before completing the banjo. Also included are several items related to Frank Proffit's death not long after; two original obituary clippings, a card from the Proffitt family thanking the writer for his sympathy note, and a final letter from Frank Proffitt Junior (after his father's death) about supplying a dulcimer, stating he will continue to make instruments "to the best of his ability".

This folkloric banjo remains in very good playable condition, with some minor wear and repair. It has been played over the years; there are scratches and scuffs, mostly to the back, but the finish is organic enough to make any but the heaviest wear relatively inconsequential. The skin head has been replaced, as the original split badly some time back...it is included for posterity's sake. Reheading this instrument involves basically dismantling it, and the small plugs covering the assembly joints on the top and back must be removed and reseated. This has all been done neatly and with minimal alteration to preserve originality.

There are several repaired cracks in the maple top piece of the rim near the tailpiece, all well-sealed up. The original hand-carved bridge is worn but still functional. The neck has a slight relief (needed on a fretless) and the fingerboard has very little wear. While some modern players might prefer gut or nylon strings on this style of instrument, Proffitt banjos were originally built for and fitted with steel strings. The banjo plays very well to the standards of these instruments; with steel strings and hand-made friction pegs it is not the easiest to tune, but rewards the effort with a beautiful and uniquely evocative sound. Overall Excellent Condition.
×