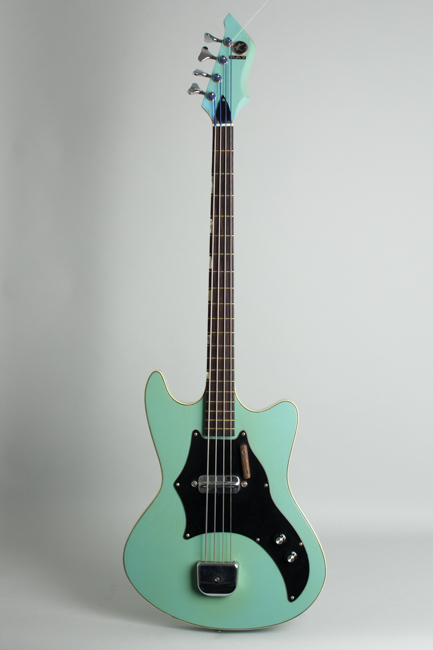 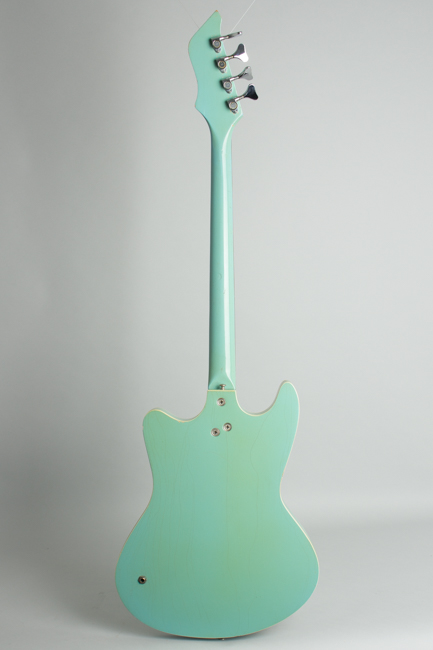 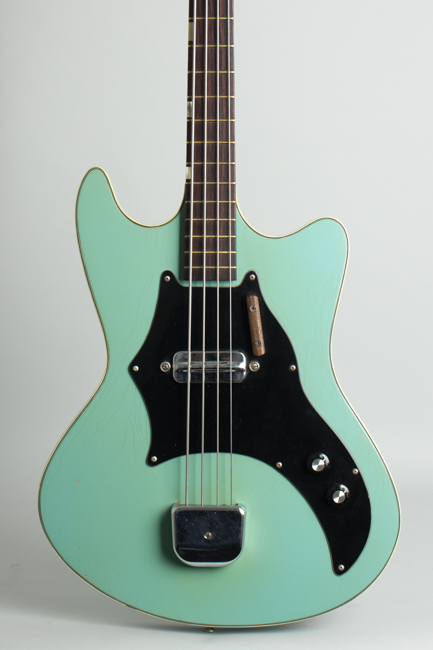 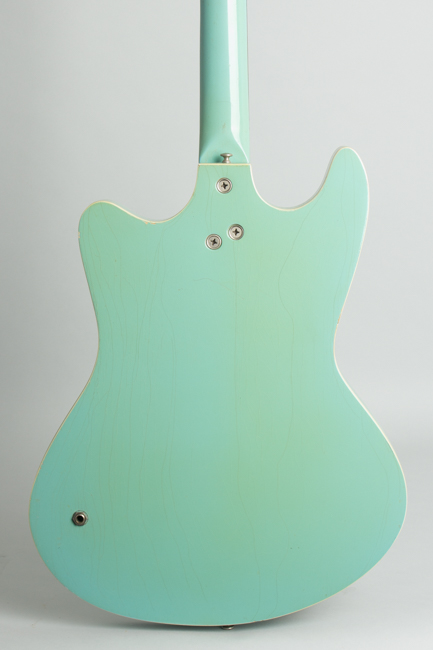 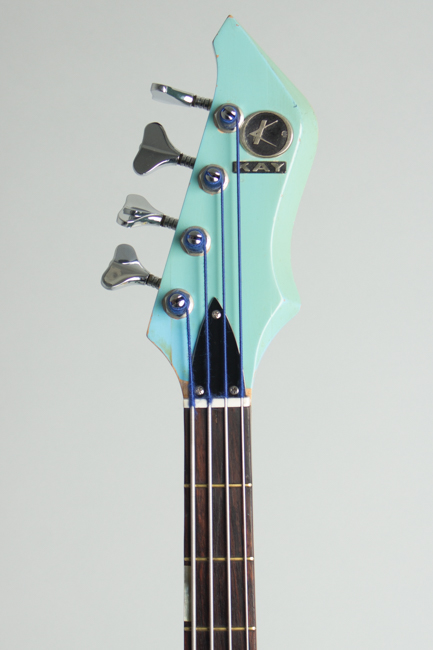 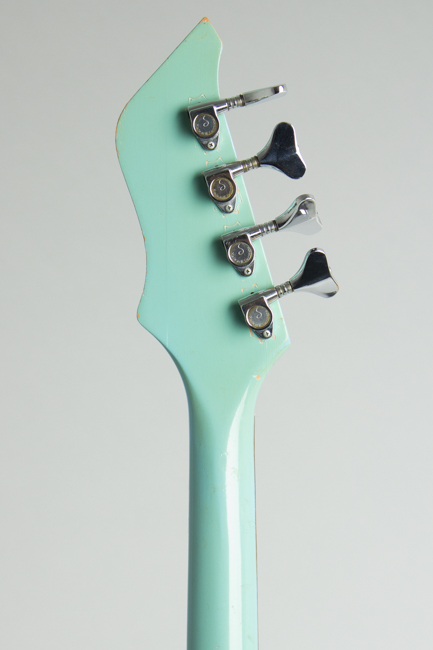 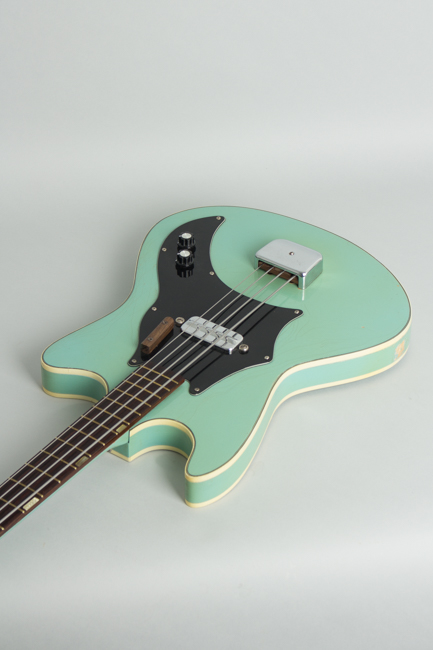 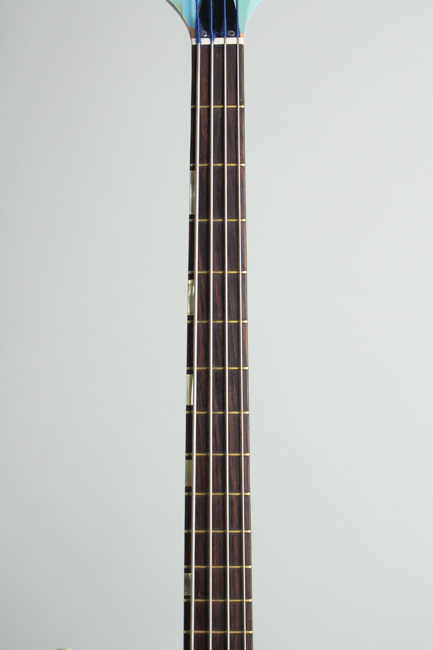 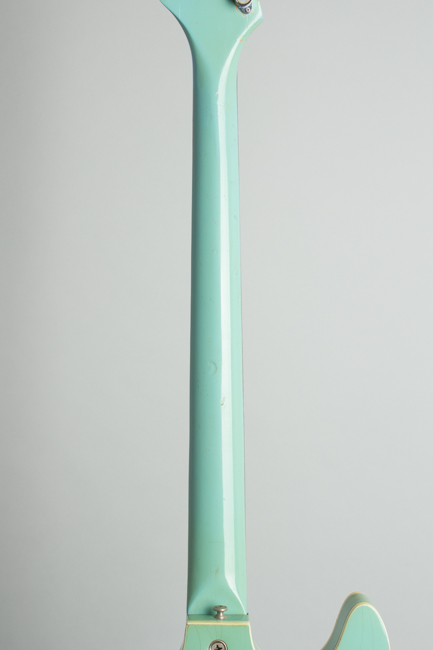 By the late 1960's the Kay company in Chicago was on its last legs, having struggled with mostly outdated or just odd designs through the early years of the guitar boom and then ceding the low end of the marked to imported competition. Their flashy 1966-67 line included some modern looking instruments with a more Fender-y character including this striking looking bass. Unfortunately these were not much of a success, and the Kay company did not survive a series of buyouts and mergers before the end of the decade

This model K-5925 bass was described in the Kay catalog as a solid body but is actually more semi-hollow, with a short-scale neck and single "speed bump" pickup. The most striking feature is the lovely finish, described by Kay as "Soft Teal Blue" and accented with black-and-white binding on the edges. The fluid-shaped headstock and back of the neck are painted to match. Kay offered this basic design in both single and double pickup versions in red, white or blue; all are quite rare but this is teal one of the most visually striking instruments in the line and a real looker from any angle! Oddly enough there is no exact guitar equivalent to this model, the design was only offered as a bass.

Most other features are fairly conventional. The short-scale neck has a rosewood fingerboard with a sort of Gretsch-like top edge inlay. The neck itself is quite slim with a soft "U" profile, slightly reminiscent of Kay's upright bass roots. The single-coil pickup is centrally located on the body giving a nice midrangey sound, with a volume and tone control and rosewood fingerrest mounted on the laminated black pickguard. The one howlingly weird feature is the jack, located on the BACK of the body instead of the side or top; perhaps someone at Kay thought this was nice and discreet (or something) but it pretty much necessitates a right-angle cord to avoid constantly banging it into the players leg! Still, this one shore is a looker guaranteed to be a conversation piece in any context.

While we usually specialize in instruments that are all original, this very cool looking bass has had some modifications to make it more player friendly into the 21st century. The original pretty much useless truss rod has been replaced with a sturdier Gibson-style piece, which has a slightly differently shaped custom-made cover on the headstock. The original tuners were small guitar-size pieces of dubious functionality on a bass; they have been replaced with a set of older Schallers that are heavier but do indeed tune the bass easily and securely. Everything else is original except the knobs, which are period but a generic style.

The beautiful blue finish…really this instrument's shining feature…is generally well preserved, faded a bit to a nice aqua tint with some light checking and small dings and dents. There is one big scrape on the upper side and a bit of loss on the headstock just above the nut from the truss rod installation. A chip of binding is missing from the upper back edge but the celluloid binding is not shrinking heavily or crumbling. Everything else on the bass is original, including the somewhat worn-down rosewood bridge and the usually lost chrome cover for it.

We can't promise this is the greatest playing vintage bass out there, but it certainly sounds good and plays as well as many other 4-strings from the period…that aren't Fenders! The neck is quite slim with a fairly narrow string spacing, and the original brass Kay frets show very little wear. The central-body pickup position gives it a nice midrangey growl, in the same sonic category as a Fender Mustang. Absolutely a looker, though, and a relatively nice example of this end-of-the-line Kay offering in a superbly cool finish. It rests in a period lower-grade HSC that might be original…it looks fitted to the bass, though a bit tight in spots. Excellent - Condition.
×