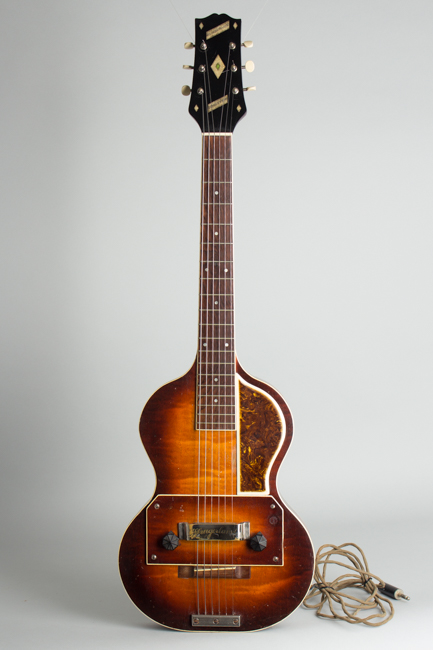 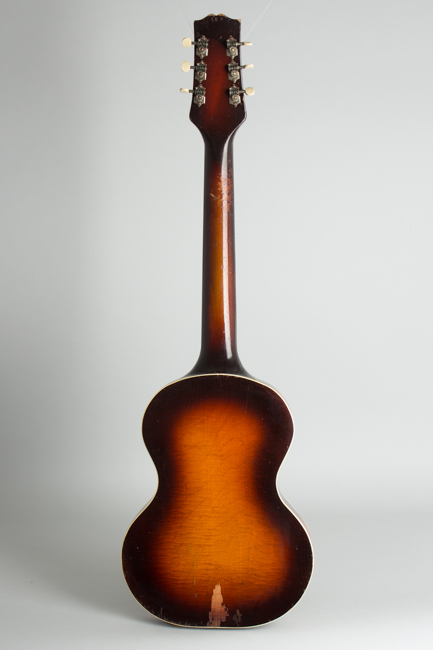 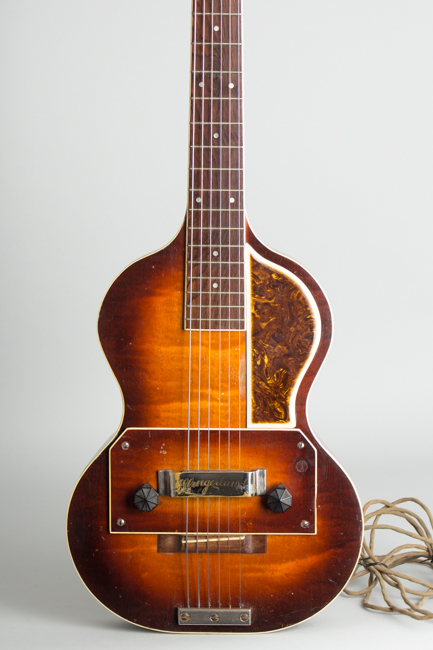 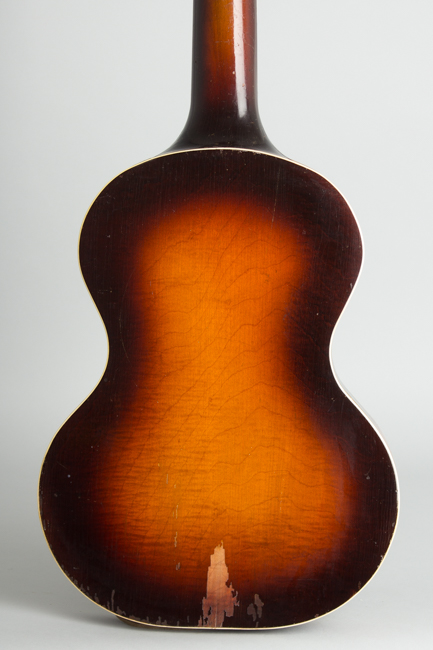 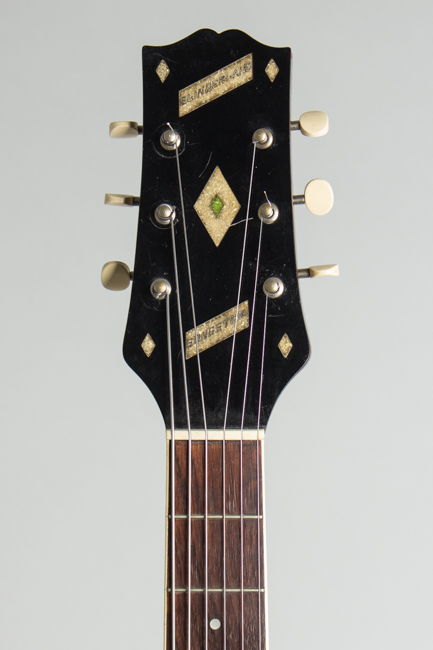 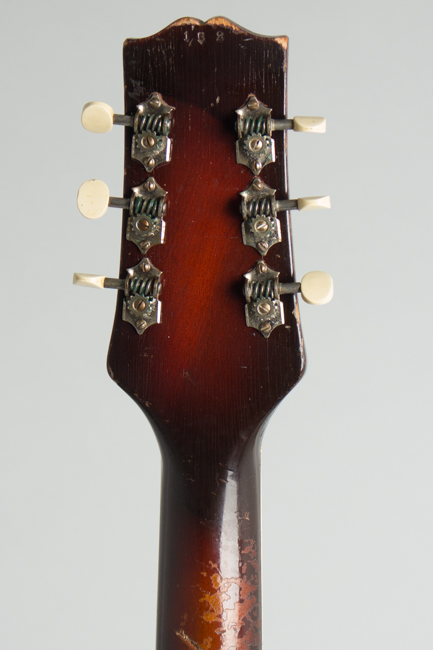 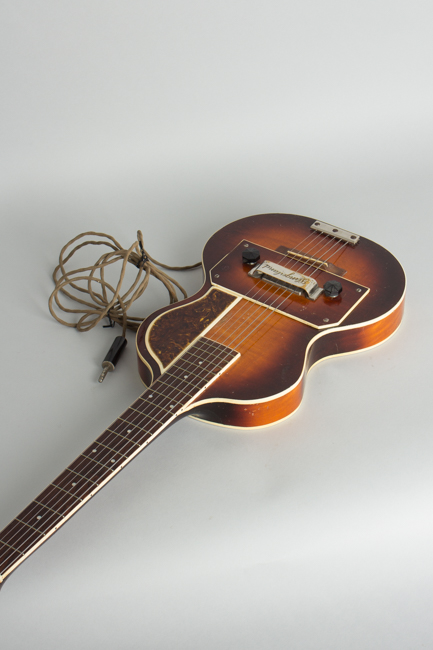 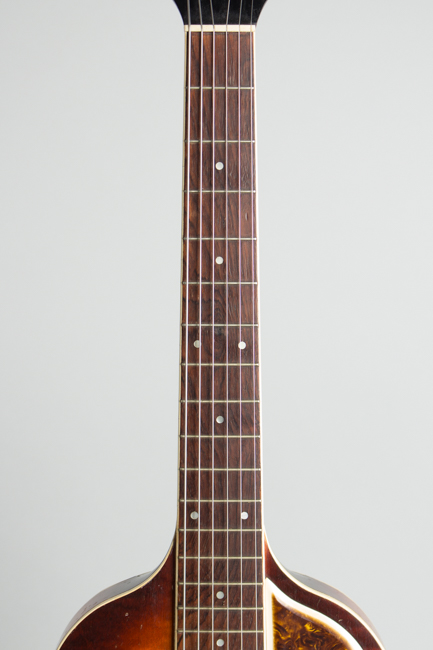 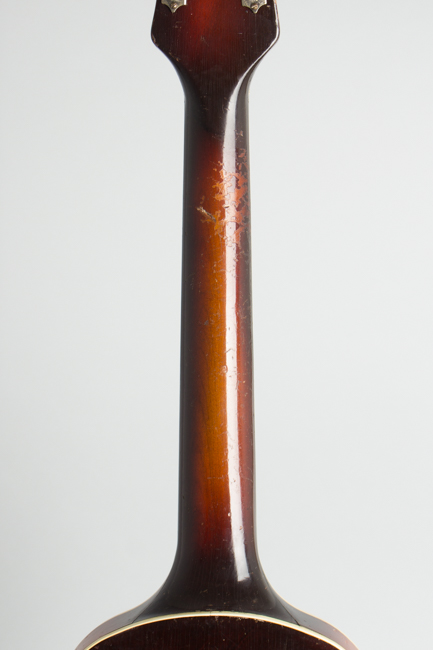 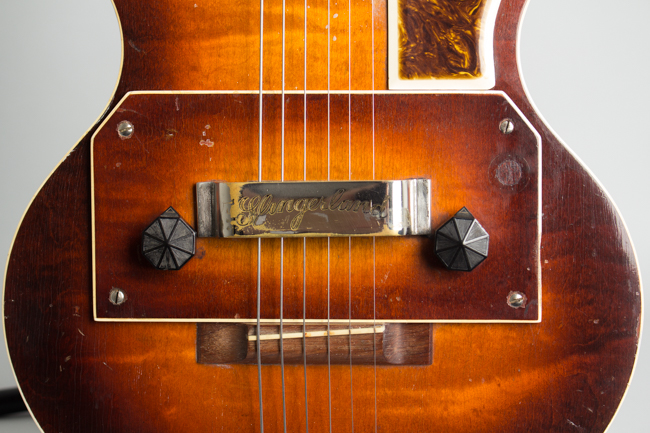 This very interesting -- if rather diminutive -- electric guitar is one of the most obscure yet historical of all early electric instruments. Although hardly remembered today, the Model 401 Slingerland Songster was the most forward-looking electric guitar of its time, and its design actually predicts many of the modern developments in electric guitars of the 1950s and beyond. Slingerland basically had the elements that would make up Gibson's Les Paul in place by 1937, but never followed through!

The Slingerland name is generally associated with drums; the company's "Radio King" line of the 1930s was a definitive instrument of the big-band era and established the layout of the modern drum kit. The brand is otherwise mostly familiar to vintage banjo enthusiasts, as they made thousands of the cheaper banjos of the '20s and '30s. Even when primarily prospering with drums, the company continued to make a full line of stringed instruments up until World War II. Their acoustic flat-top and arch-top guitars, mandolins, and ukuleles ranged from cheap student-level "bangers" to professional-quality instruments; the best were solidly built and good-sounding.

In the mid-1930s Slingerland introduced two unique electric models, unique unto themselves but variants on the same plan. The "Songster 400 Hawaiian" appeared broadly similar to the contemporary Gibson EH-150, though there were a number of design differences. This fairly rare steel is prized among connoisseurs for its great tone and stylish Deco look. Its far more obscure sister instrument, the "Model 401 Spanish", is something else altogether. Representing a major historic step forward for amplified instruments, this was the first wooden round neck, solid-body electric Spanish guitar.

There are a few earlier claimants to the title "earliest solid-body guitar". The Vivi-tone company introduced an electric in 1933 that was effectively a flat-top acoustic without back or sides built around an inefficient vibration-sensing pickup. Another candidate is the Rickenbacher Electro Spanish model, introduced in 1935. It was a variant of their popular Model B Bakelite lap steel but with a round, Spanish-style molded Bakelite neck. While the Hawaiian model B went on to great success, the Spanish model with molded-in frets was an eccentric player at best and proved a commercial dud.

The oddly visionary Slingerland 401 comes much closer than these predecessors to what became the accepted solid-body guitar layout. Not only is it the first Spanish electric with a solid wood body, it was the first to be built with a through-neck design. The maple center section is joined to two maple wings, and flamed maple veneers cover the top and back. The unique pickup is a quite powerful six-coil design with humbucking properties -- two decades before Gibson claimed that idea. Each string has its own coil beneath it, with a large magnet hidden under the wooden coverplate providing the "juice" to sense the strings above.

Tone and volume controls are located on either side of the metal handrest/pickup cover, which is daintily engraved with the company's name in flowing script. The black plastic-covered headstock matches the Songster guitar and mandolin line, with diamonds of sparkle-infused plastic inlaid into the veneer; a typical touch for a company that made drums. The guitar connects to the amplifier with a hard-wired cloth-covered cord; this seems awkward to modern players, but was fairly common on 1930s steels.

The Model 401 is believed to have been introduced around mid/late 1936 and discontinued by 1939. It was offered as a set with a matching amp that seems equally rare. The guitar was priced at $75, plus $15 for the fairly deluxe case and another $75 for the amp. This was exactly in line with Gibson's pricing, and as with the Kalamazoo rival you could purchase the set of guitar, amp, and case together for $150.

In common with the few other attempts at electric solid-body designs in the '30s, the very electric-sounding Slingerland 401 was alien to the primarily rhythmic guitar styles of the day. The styles of playing calling for such an instrument simply did not exist yet; players saw no reason to adapt to its quirky feel and VERY few were sold. The Slingerland Songster model 401 may be nearly forgotten except by historians today, but it is one of the most significant of all early amplified guitars, and the most advanced electric fretted concept of its day. And it still SOUNDS fantastic!

This is a moderately well-worn but still original example of this extremely rare guitar. There is wear to the finish overall, with some loss to the lacquer on the back and bottom edge which appears to have flaked from exposure to moisture. The top shows checking and an area of pickwear slightly into the wood just above the pickguard. The back of the neck shows fairly heavy wear mostly on the lower bass side with a deep ding behind the third fret area. These dings and scrapes to the finish on the back of the neck are possibly from the jackplug on the hard-wired output cord being loosely packed inside the case over the years.

The only alteration to this very historic instrument is some routing under the coverplate for another pot; the round hole on the wooden coverplate above this has been filled. The instrument is restored to the original wiring scheme; the pickup is completely original, but the pots are more recent. The glued-on Celluloid pickguard has two tight shrinkage cracks across the face but is better preserved than others we have seen. There is a chip off the top edge of headstock on the treble side.

It is important to note that this guitar, although marketed as a Spanish-style instrument, is not easily playable in that manner due to the action being higher than most modern players would accept. The neck has some minor forward bow but essentially this appears due to a design flaw that Slingerland did not really think through. The instrument has the architecture of a lap steel, with the fingerboard built flat to the body. The action could be made comfortable by a structural alteration of a tapered shim under the fingerboard, which would not be overly conspicuous. As it stands the instrument is just about playable, although not to modern standards. Still, this is one of the rarest and most historically important of all early electric guitars, a very rare find. Very Good + Condition.
×