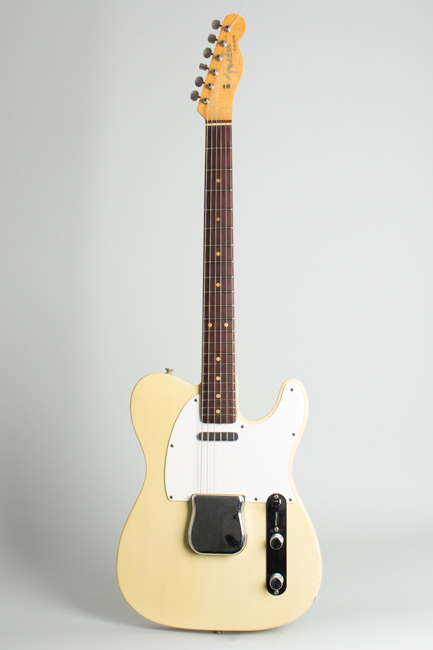 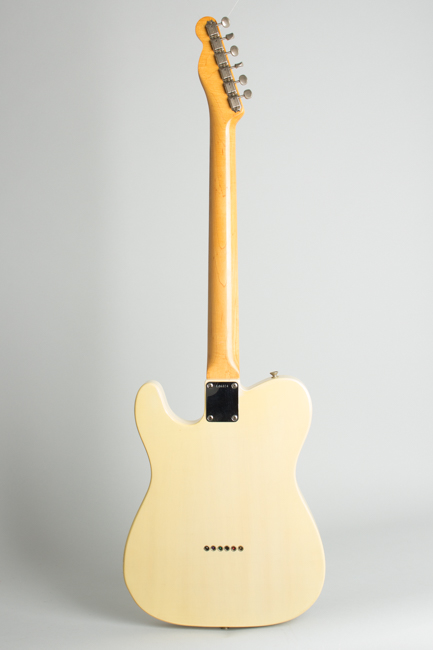 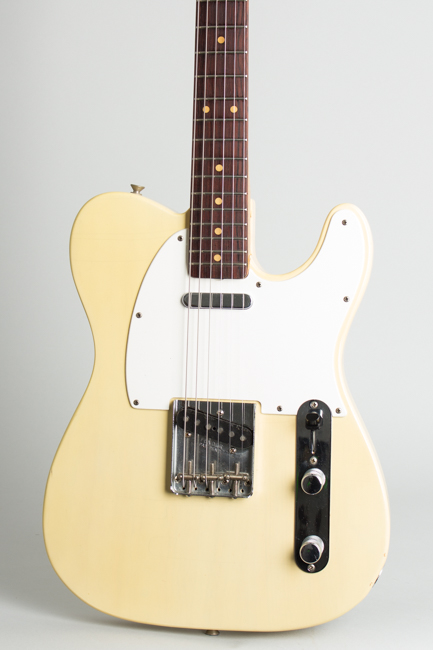 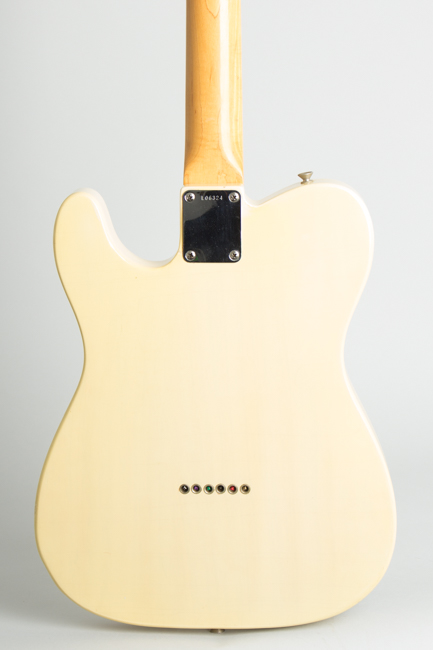 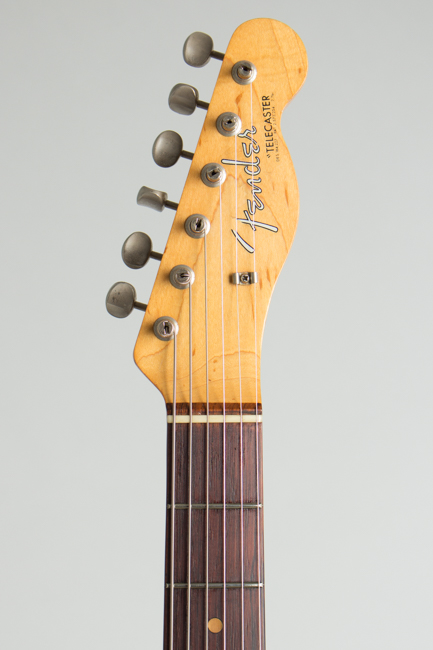 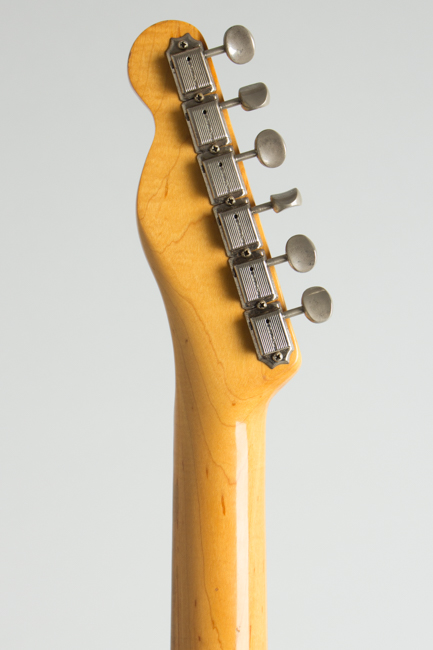 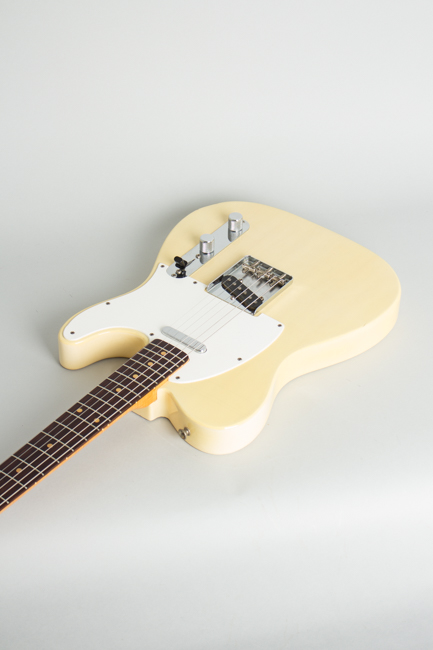 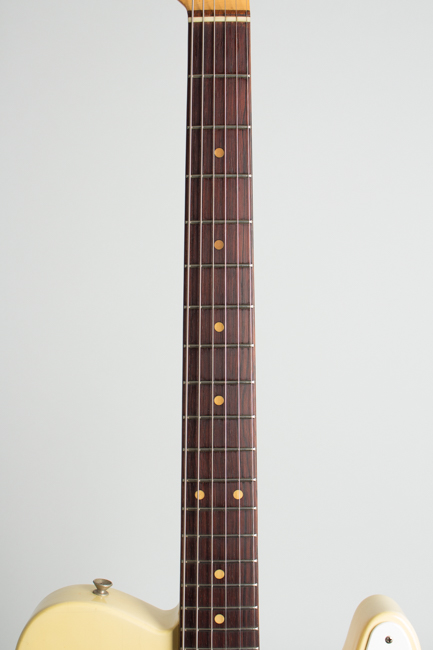 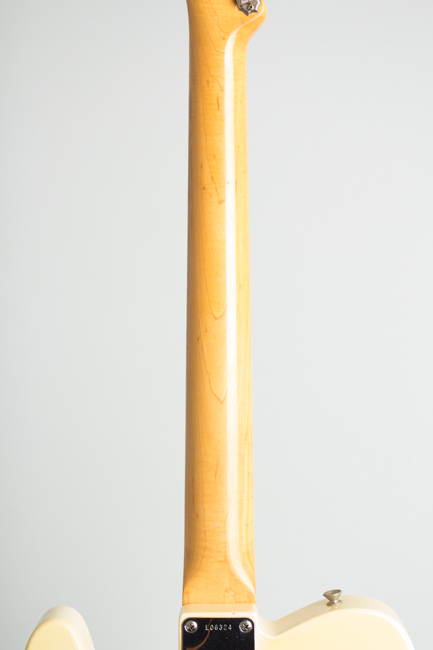 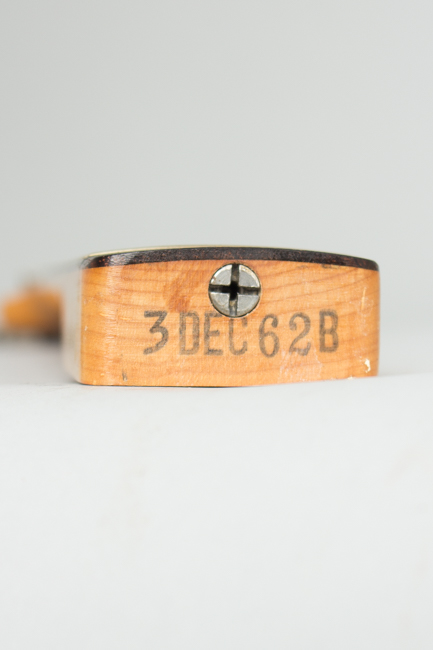 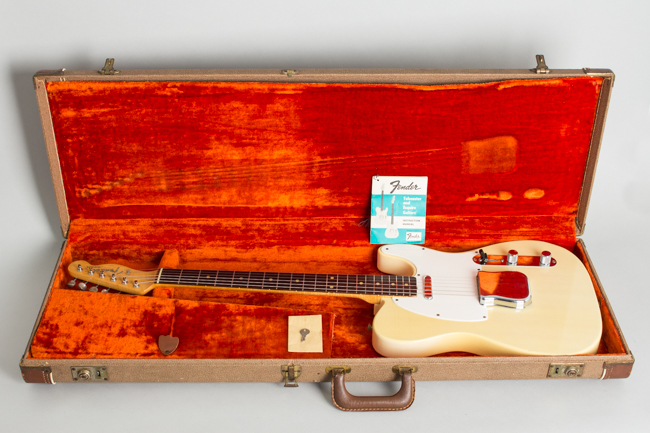 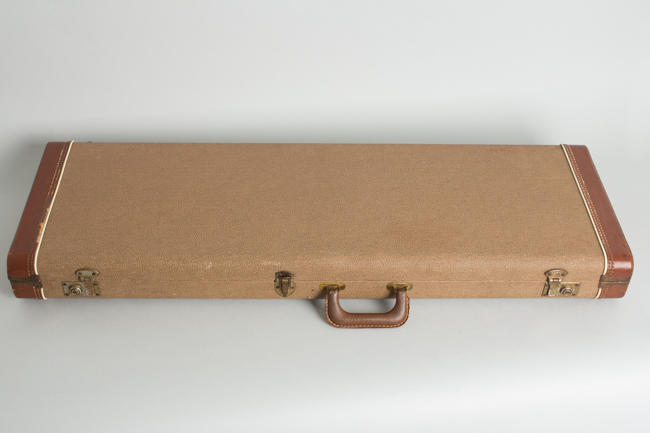 This lovely blonde Telecaster is a late Pre-CBS flag-bearer for the original Fender guitar model, assembled around mid-1963. This is one of the best preserved vintage Teles from any era we have ever had, and the sound is glorious as well. It is in superb original condition, with some very minor wear but 100% original with no alterations and only minimal signs of use.

The features specific to this period include the very last of the original single-ply white plastic pickguards, the curved rosewood fingerboard fitted with clay dots, a thin blonde lacquer finish with plenty of grain showing, older-style "Spaghetti" logo decal, early "L" series serial number, and "single line" Kluson Deluxe tuners. The guitar's electronics are unaltered and it is still wired in the original 1952 pattern with a deep bass capacitor on the forward switch position. This technically does not allow the pickups to be blended, but the switch holds the 3/4 back position well enough that this is easy enough to do. This Tele's ash body balances perfectly, and the very comfortable C-profile neck plays effortlessly with the original small frets. The neck even has a bit of flame to the maple.

This guitar's neck is actually dated to December 1962 but the pots carry a code from the 20th week of the next year, suggesting the guitar was assembled that summer of '63. This timing gap is not uncommon for Telecasters from this period; they are actually quite rare, even compared to the coveted early 1950s "Blackguards". The Telecaster was considered an "outdated" 10 year old design at this point, only ordered by Fender dealers in very small numbers as the model was overshadowed by newer and flashier Fender instruments like the Jazzmaster and Jaguar. The model experienced a renaissance later in the decade, making a grand comeback in the late '60s, but great '63s preserved like this one are rare gems indeed!

This is simply one of the cleanest pre-CBS Fender guitars we have ever seen, made during the Kennedy administration and still shining like Johnson was in office. There is some light scuffing overall and some tiny dings and chips to the edges, but really this guitar has survived nearly 60 years on earth far better than most things! The most notable flaw is the headstock decal has flaked in a couple of spots; a piece of the upper curve of the Fender "F" is missing.

The body finish shows a bit of very light checking. Everything is original -- every solder joint and screw is as it left Fullerton. The bridge unit and saddles still look new; the metal cover must have been left on most of the time since new. There is a tiny amount of fret wear in the lower position and some finish rubbed off that end of the neck on the treble side, but really the instrument appears to have been handled on and off since 1963 but very rarely actually played.

The original brown Tolex case and rare pre-CBS Telecaster hangtag are still present. The case has more handling wear than the guitar but is still a wonderfully preserved example. This one really feels like a time capsule find, looking as it might have in a second-hand shop in 1964 -- "Oh, you like them Beatles, do ya? Well, this Fender is maybe not the most popular but it'll do ya well for only..." Well...we can still dream! Excellent + Condition.
×