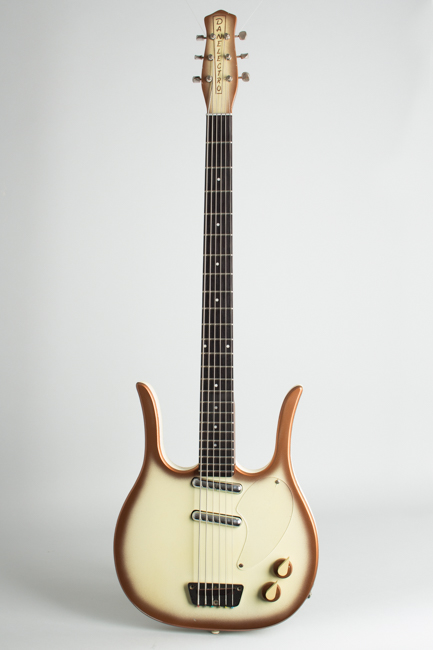 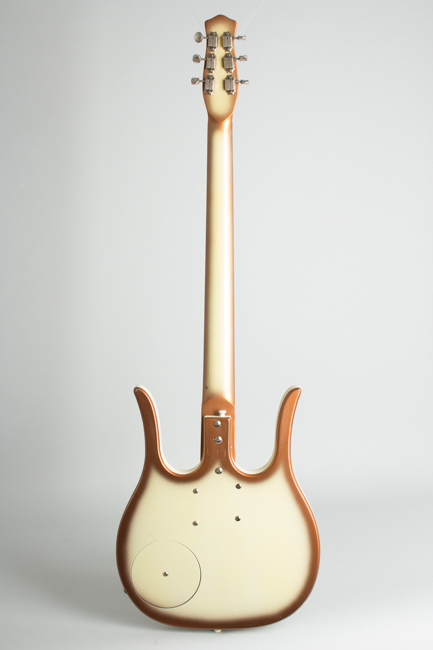 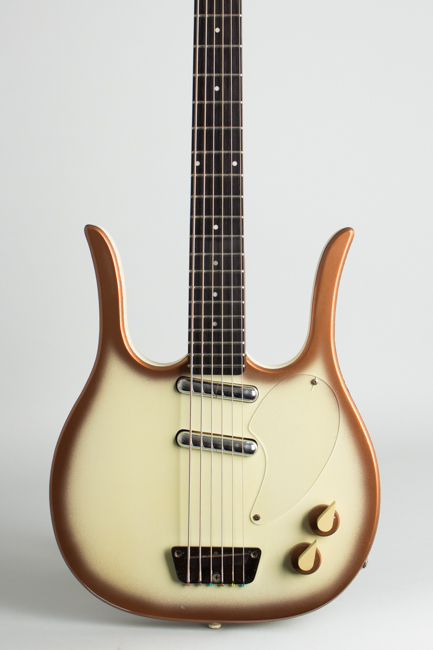 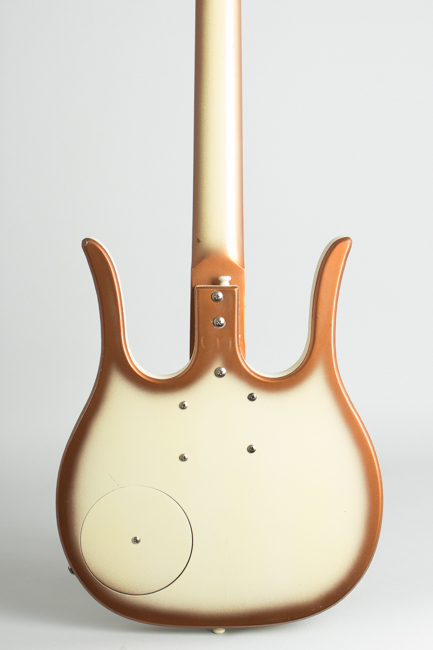 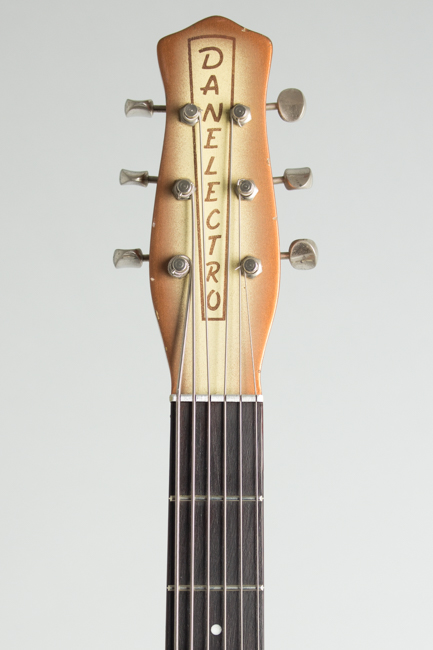 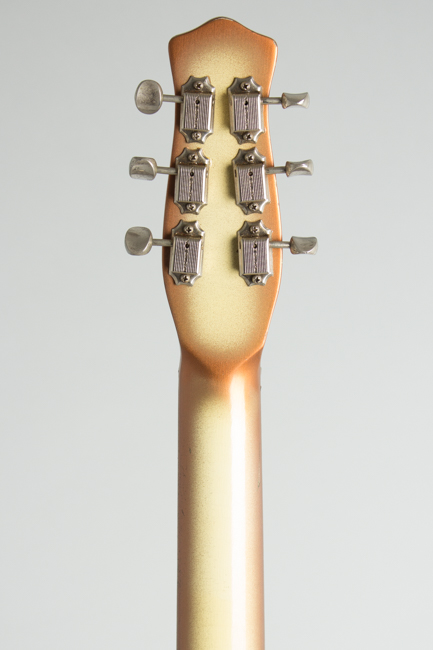 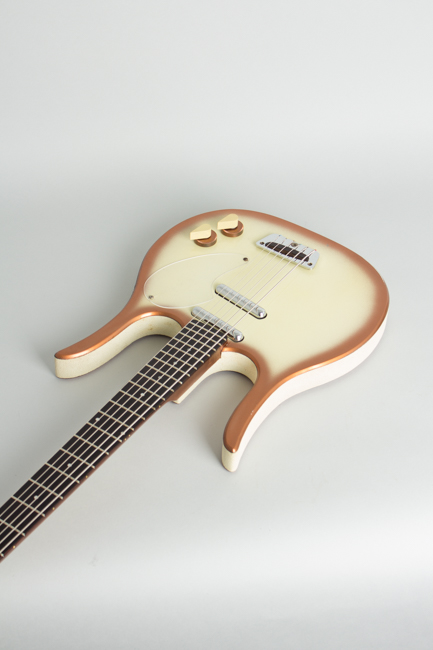 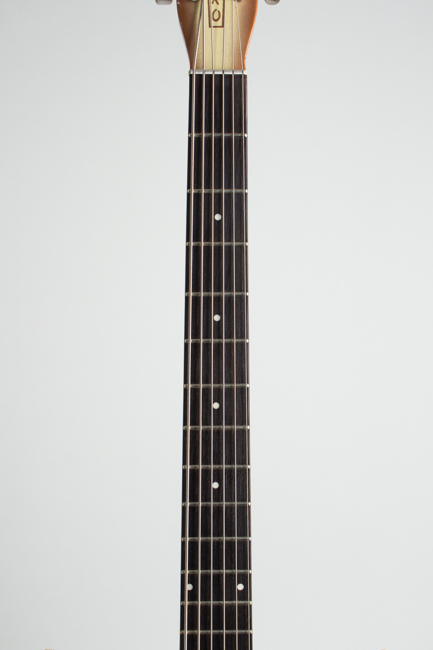 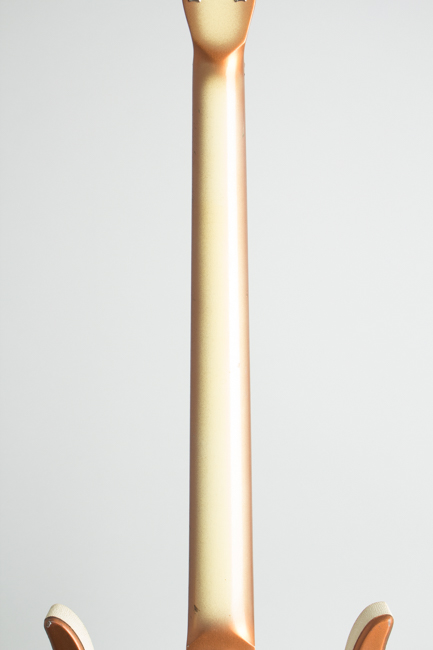 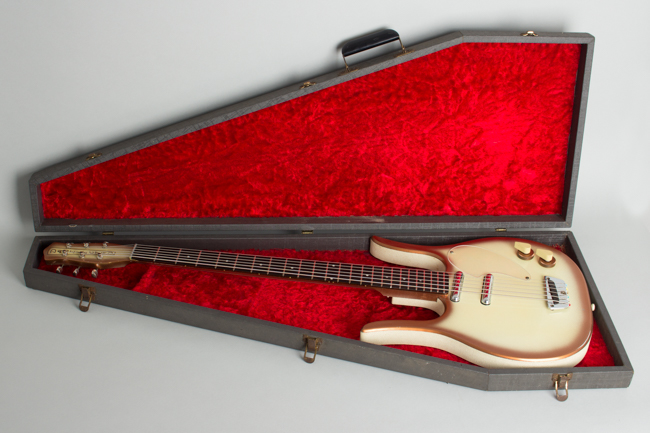 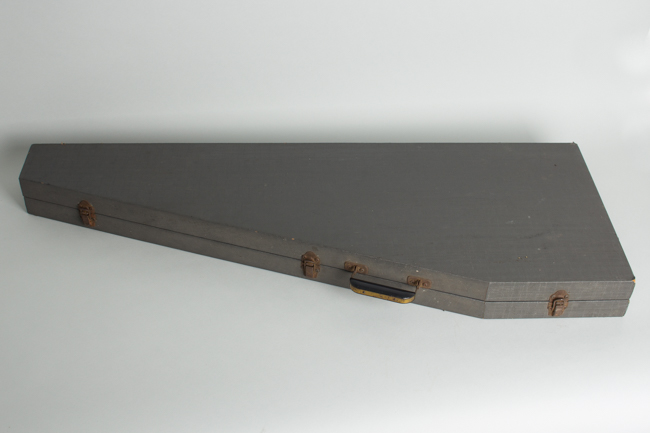 This 6-string Danelectro Longhorn Bass is a serious rarity and simply one of the coolest twang machines ever designed! The Model 4623 was introduced in 1958 alongside the matching 6-string "Guitarlin" guitar and "regular" 4-string bass. This example is one of those first-year models, of which very few appear to have been sold. After a quick re-location of the treble pickup farther back on the body in 1959, the Longhorn basses survived through the 1960s with only minor alterations.

Listed at $150.00, this was Danelectro's most expensive bass instrument up until the late '60s. Despite being one of the New Jersey company's best-remembered creations, the Longhorn series are all actually fairly rare, especially in this long-neck 6-string format. All Longhorns were heavily outsold by the "Standard" models (called "shorthorns" in retrospect) that retailed around $50.00 less in the '50s and '60s.

Then and now, the Longhorn is a delight to play. The body size and shape is identical on all three Longhorns, the basses just having a longer 29 1/2" scale neck. Daniel felt he had given bass players "two extra strings for free" and the instrument would be a natural for both bassists and guitarists. The small, light semi-hollow body is extremely handy and the two Danelectro "lipstick tube" pickups produce a tight and punchy sound. With the short-scale neck set deep into the extreme cutaway body and the bridge near the bottom end, the instrument is very compact, no longer than many guitars.

All Longhorns have an eccentric wiring scheme with two concentric pots: the upper shaft carries an on/off flipper for each pickup with a volume knob on the lower section. The tones are pre-set with pre-set capacitors wired to the pots, so the bass pickup is permanently "bassy" and the middle pickup much brighter. The tone can be adjusted by blending the levels of the two pickups; many users found this system confusing in actual use and most surviving examples have been modified. This instrument has all the original electronics with pots dated to the 40th week of 1958 and has never been altered at all.

This particular bass dates to late 1958, the model's introductory year. It has distinctive features from that period, the most notable being it shares the body of the "Guitarlin" guitar with both pickups mounted down near the neck. It does not have later Danno features such as the "Totally Shielded" sticker on the headstock or "tilt-neck" adjustment screw on the back. The headstock mounts individual Kluson Deluxe tuners. The bridge is the standard Dann-O item, a metal plate adjustable for height with a sliding rosewood saddle. The unique bronze/white sunburst finish was the only color offered.

While rarely seen onstage, Nathan Daniel's guitar-like bass WAS a hit in recording studios, especially in Nashville. Session players developed a style of playing with a palm-muted pick, dubbed "Tic-Tac" bass. Within a short time this became a widely heard sound. Well before the Fender Bass was accepted on many record sessions, a Danelectro was the hot new sound...many twanged away in the late '50s and '60s, unseen but easily heard on hundreds of recordings and particularly in TV and film soundtracks. One would think the looks would have inspired more live use -- vintage-style rocker Dave Edmunds used one prominently on his INFORMATION album in the early 1980s, and duly posed with it on the cover. We are extremely pleased to offer this spectacular and very rare 6-string example of one of our favorite instruments, the immortal Longhorn.

This is one of the cleanest and most original 1960s Danelectros we have seen in a long time, showing very little play time from the last 55 years. If not for some small dings, dents, and dirt spots, this one would rate an EX++. The only alteration to this amazingly well-kept bass is the original thin acetate pickguard has shriveled up rather dramatically, and is included (in the case) but not mounted. In its place is a good repro with one small crack at the forward mounting screw hole.

This is also a fine player with a nice straight neck. Except for the pickguard it is completely original, everything as God and Nathan Daniel intended when it left the loading dock at Neptune (New Jersey, that is). This instrument was designed as a 6-string bass (tuned E-E) and is currently strung and tuned in that style. It would also be easily adapted to the more currently fashionable B-B Baritone setup. This amazing rarity sounds fantastic in either tuning and looks wicked as all get-out doing it. As cool as they come; so sparkling in its white-bronze appliance burst it looks like a re-issue, but this is THE genuine 1960s American Masonite and poplar here. Excellent + Condition.
×