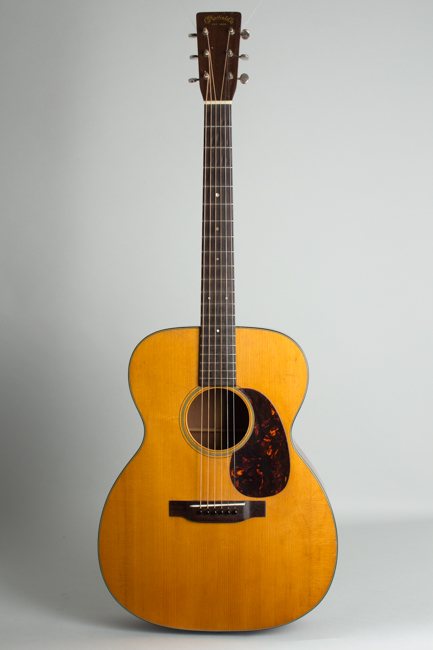 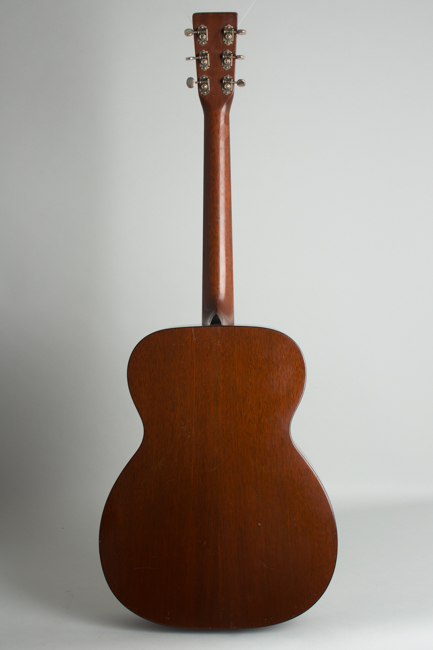 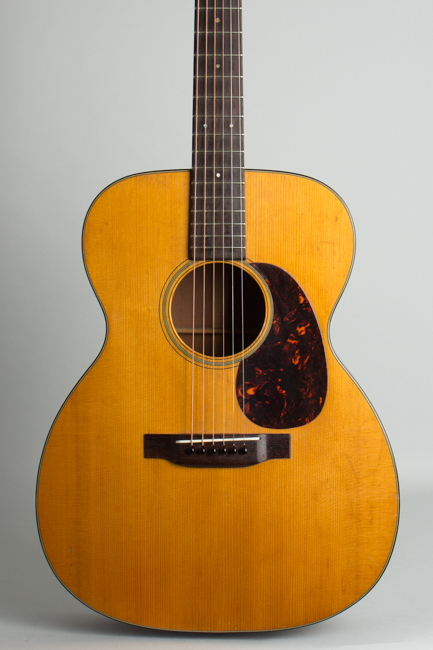 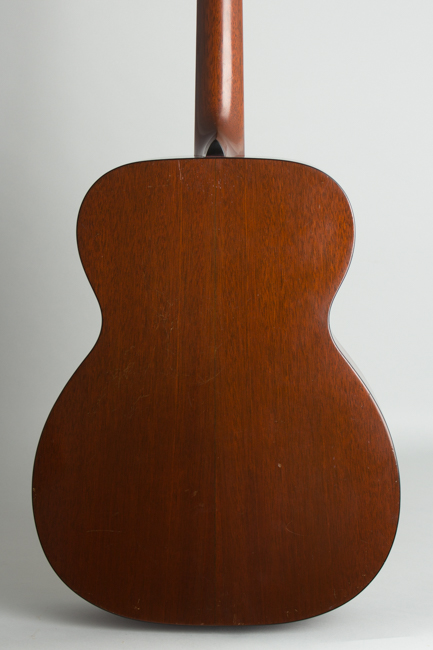 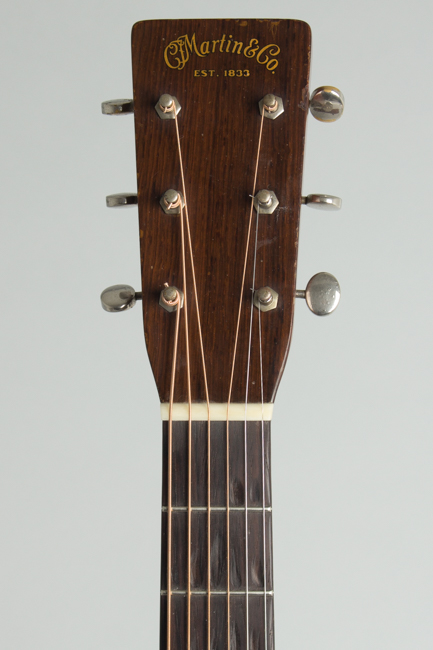 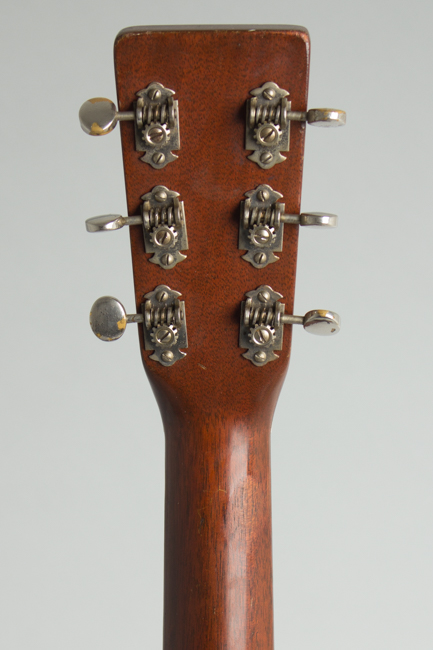 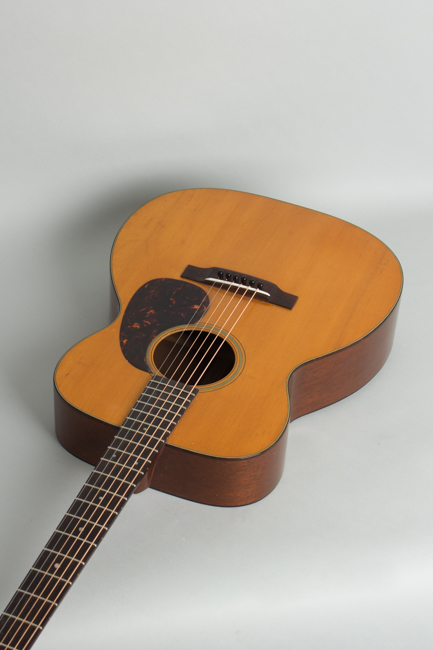 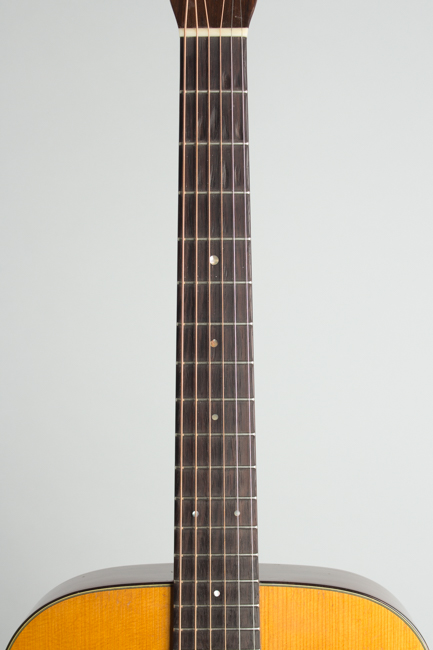 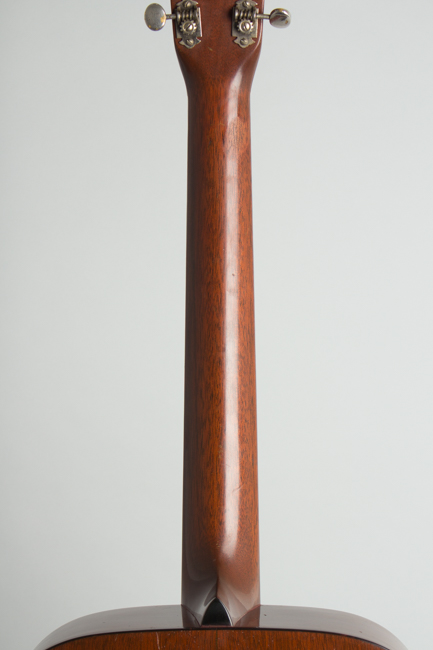 To many players and Martin fans, Pre-WWII examples of the 000-18 constitute one of the company's most propitious and beloved combinations of wood, wire, and inspiration. The light mahogany body coupled with a scallop-braced Adirondack spruce top makes for a very responsive guitar; the 15" wide narrow-waisted 000 size body contributes both depth and clarity to the sound.

The 14-fret 000 sized body was introduced with the OM-18 in 1930; after 1933 nearly all Martin guitars were being built in this new "Orchestra Model" format so the OM designation was dropped, and the model simply called the 000-18. The original OM-18 used a long 25.5" scale length, but Martin changed this to a slightly shorter scale in 1934. The 000-18 has remained one of the company's mainstays ever since.

While not a tremendously expensive guitar by 1941 standards, listing at $60.00 (plus case, just raised from $55) the 000-18 still represented a substantial investment to many players. This is not a flashy guitar; the trim is discreet with tortoise celluloid on the body edges and a simple multiply sound hole ring. In classic Martin style, the elegant understatement speaks for itself. Despite its lack of flash this was always a fully professional instrument popular with radio entertainers, most obviously the country acts common in the Southeast.

This example was built in the first quarter of 1941, just months before the US was plunged into conflict. It is one of a total of 326 000-18s shipped in that year of peace on the home front. It shows typical late pre-war features including lovely mahogany on the back and sides, a superb straight-grained Adirondack spruce top, Brazilian rosewood fingerboard and bridge and dark tortoise celluloid for the pickguard and body binding. The light scalloped X bracing is the "back shifted" pattern adopted at the end of the 1930's to give the top a bit more resistance to the heavy strings of the day; scalloped bracing was discontinued entirely in 1944. The neck is mahogany, made to a fairly slim "C" profile with hints of a "V" along the spine as it gets closer to the body. The fingerboard inlay is small mixed size pearl dots and the tuners are individual open back Waverly units with metal buttons

While this 000 has seen some use and wear it remains far less well-worn than many of these veteran instruments. It is in excellent playing condition and sounds truly sublime. The mahogany 000 is a very fine finger picker's instrument but offers a lot of punch and clarity as a straight rhythm machine as well. That's how many were played in the Cowboy and "Hillbilly" radio bands of the 1930s, anyway. Whatever the style of music one might prefer, mahogany flat-top guitars simply don't get a whole lot better than this.

Overall length is 39 3/4 in. (101 cm.), 15 3/16 in. (38.6 cm.) wide at lower bout, and 4 1/8 in. (10.5 cm.) in depth at side, taken at the end block. Scale length is 24 3/4 in. (629 mm.). Width of nut is 1 11/16 in. (43 mm.).
This is a very clean and great playing example of this pre-war (Just!) Martin classic. There is some general wear but nothing that detracts from its character or originality. The finish shows very fine checking mostly to the top, and there are minor scratches, dings and dents overall. The top has some pick wear mostly around the pickguard but far less than we often see. There is belt buckle scuffing to the finish on the back into but not through the finish, with a few deeper dings and scrapes.

The rosewood bridge is old and the correct style but appears to be a somewhat later replacement; the small maple bridgeplate remains original and in excellent condition. Internally the guitar is very clean showing no repairs. There is one tiny edge crack on the treble side waist over the kerfing but otherwise this is an amazingly crack-free guitar, even the nearly unavoidable pickguard cracks are absent. The spruce top is in very fine condition having escaped the ravages of dryness and heavy cowboy-style strumming that have left their mark in many old Martins.

Thanks to a recent neck reset and refret with correct style wire this is a wonderful playing guitar. The bone nut and saddle are newer as well. The fingerboard shows some fairly heavy divoting in the first position but not enough to cause any playability issues. There is some finish rubbed away on the back of the neck from thumbwear in the first position. The original Waverly tuners are still intact and working well. This is simply a wonderful playing guitar, with a very full slightly dry sound typical of old mahogany 000's. It has survived the years during and since WWII far batter than many and will continue to shine well through the 21st century. Excellent Condition.
×