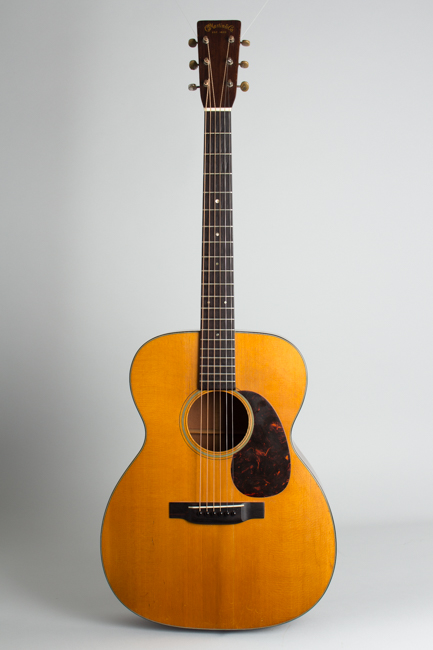 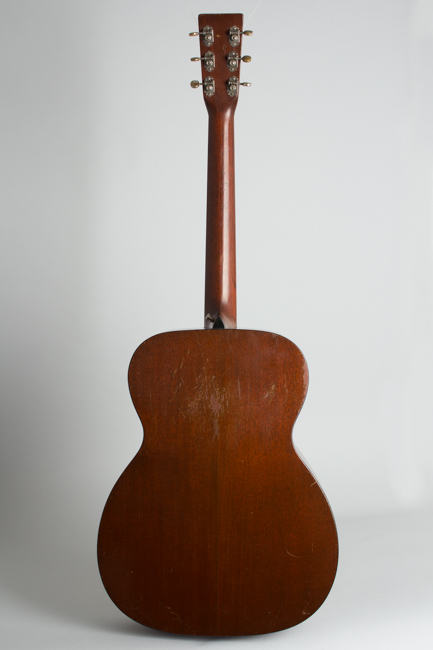 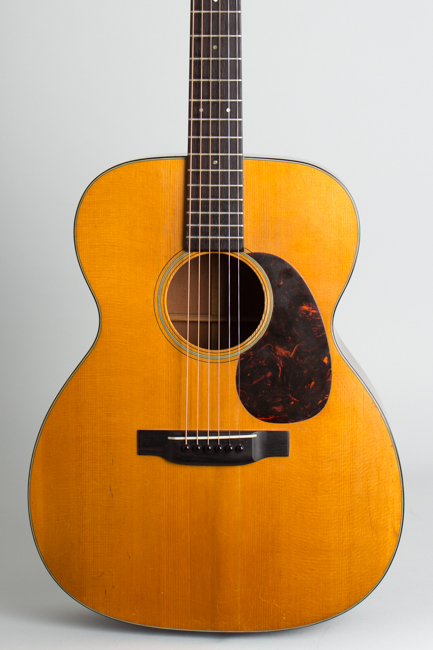 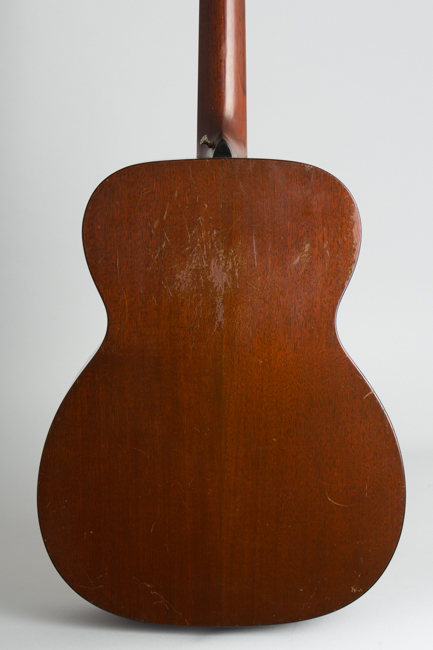 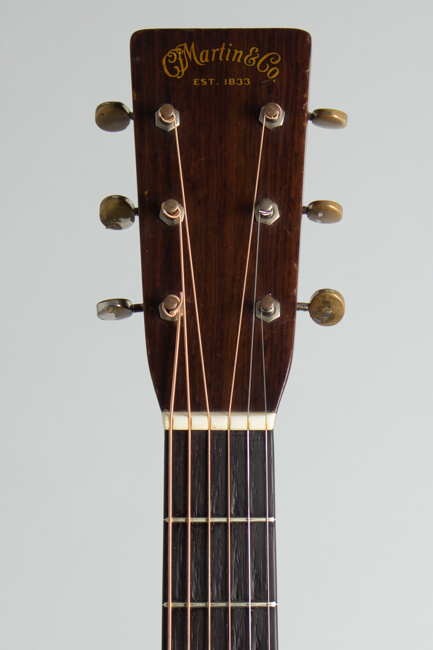 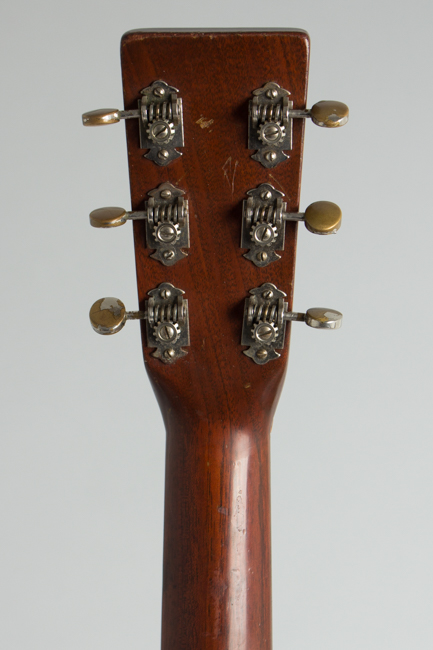 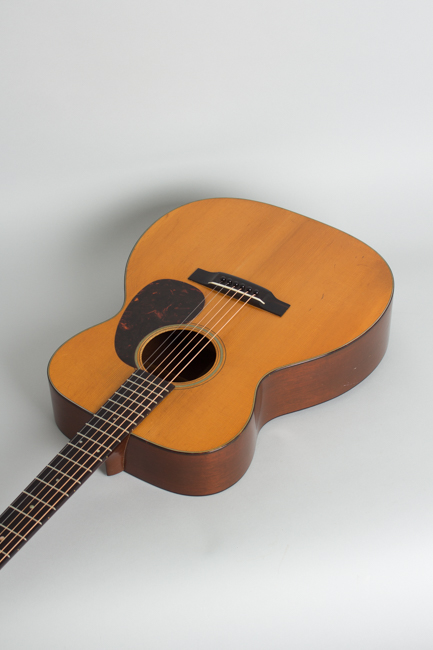 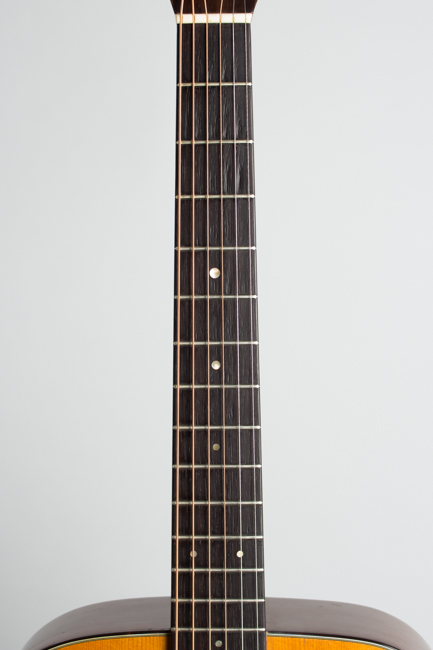 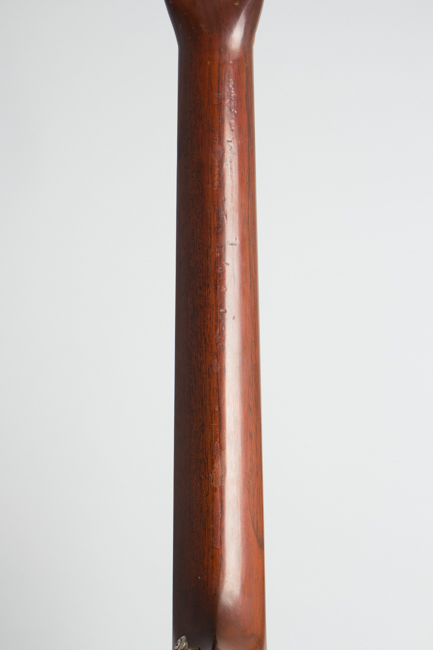 To many players and Martin fans, pre-WWII examples of the 000-18 constitute one of the company's most propitious and beloved combinations of wood, wire, and inspiration. The light mahogany body coupled with a scallop-braced Adirondack spruce top makes for a superbly responsive guitar; the 15" wide narrow-waisted 000-size body contributes both depth and clarity to the sound.

While not a particularly expensive guitar by 1941 standards, listing at $60.00 (plus case) the 000-18 still represented a substantial investment to most era players. This is not a flashy guitar; the trim is discreet with tortoise celluloid on the body edges and a simple multiply sound hole ring. In classic Martin style, the elegant understatement speaks for itself. Despite its lack of flash, this was always a fully professional instrument popular with radio entertainers, most obviously the country acts common in the Southeast.

This example was built around the middle of 1941, one of a total of 326 000-18s shipped in that last year of peace on the home front just before the US entered WWII. It incorporates typical pre-war features including lovely mahogany on the back and sides, a superb straight-grained Adirondack spruce top, ebony fingerboard and bridge, and tortoise celluloid pickguard and body binding. The most distinctive feature of this 1941 000 is not visible...it is the very light scalloped bracing under the top, which was altered in 1944 to a heavier design. The neck is mahogany with a fairly slim "C" profile with hints of a "V" along the spine. The fingerboard inlay is small mixed size dots and the tuners are openback pre-war Waverlys with metal buttons.

This 000 has seen use and wear but is in excellent-playing condition and sounds truly sublime. It is an excellent fingerpicker's instrument but also has a lot of punch and clarity as a straight rhythm machine as well. That's how many were played in the Cowboy and "Hillbilly" radio bands of the 1930s, anyway. Whatever the style of music one might prefer, mahogany flat-top guitars simply don't get much better than this.

Overall this is a nicely original and well-preserved guitar, with much less wear than many of this vintage. The most notable repairs are a replaced bridge and bridgeplate, both very neatly done to the original spec. The guitar was also refretted some time ago, and has a newer nut. The fingerboard has light divoting still visible in the lower positions. The finish shows dings, dents, and scuffs, mostly to the back which has some fairly deep belt buckle wear. The lower edge of the sound hole has some finish loss; otherwise, the top has only relatively shallow pickwear and small dings and scrapes.

There is one long top crack running from the top edge of the pickguard back to the bottom edge of the guitar, cleanly sealed and cleated. There are no other apparent cracks. The tuner buttons show some plating loss but the tuners are original and have never been off the guitar. This is a fantastic player with a dry, woody sound that has a surprising depth and power when pushed. A truly superlative pre-WWII mahogany Martin, ready to ride the range again. Excellent - Condition.
×