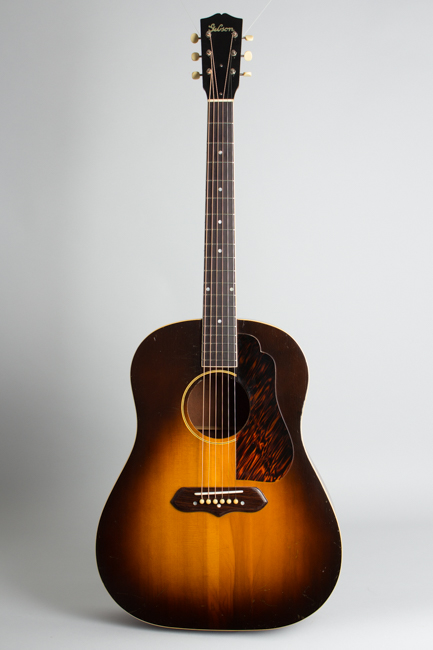 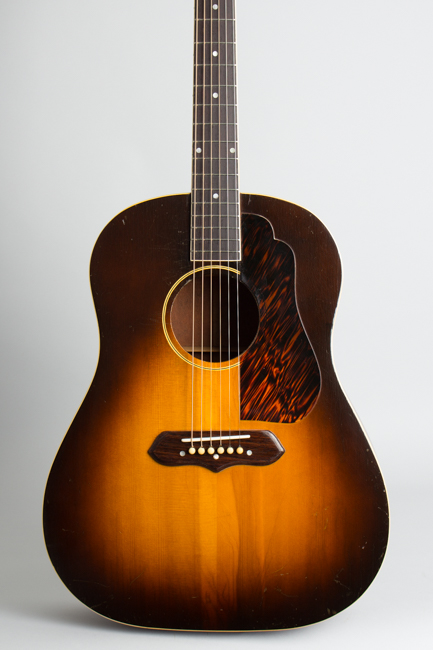 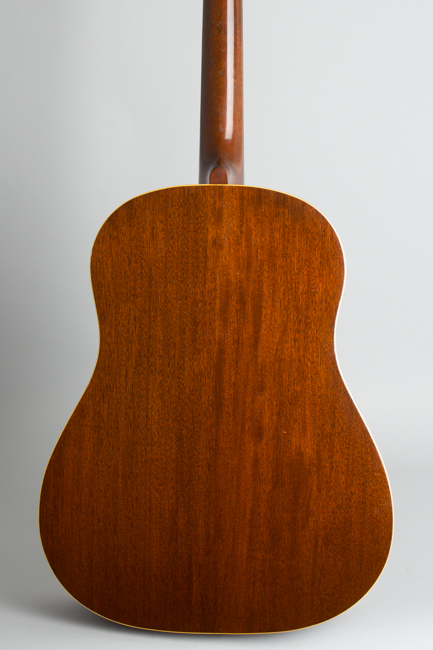 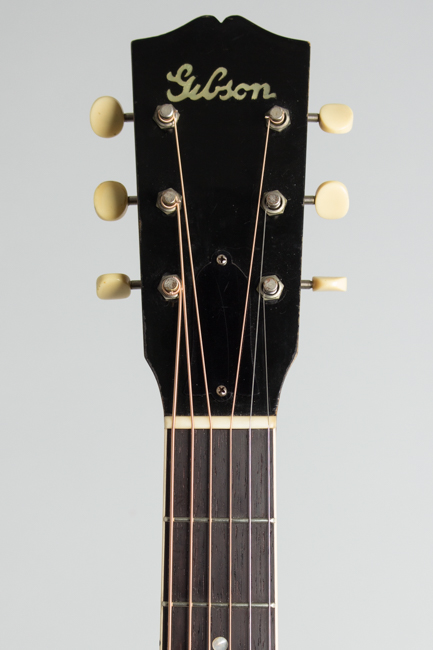 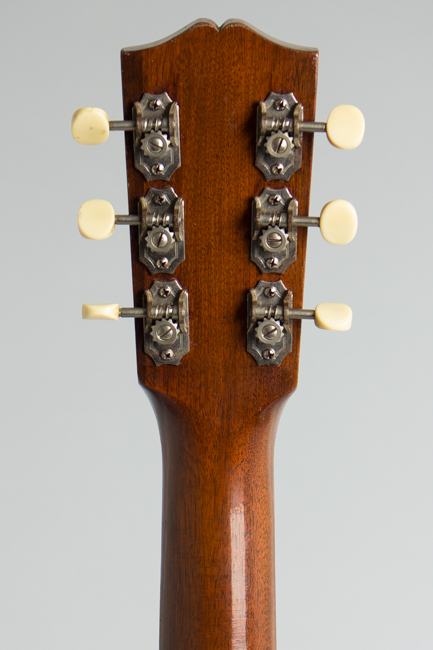 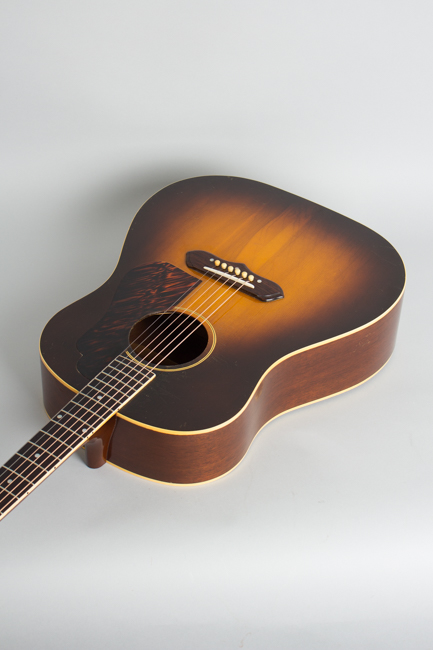 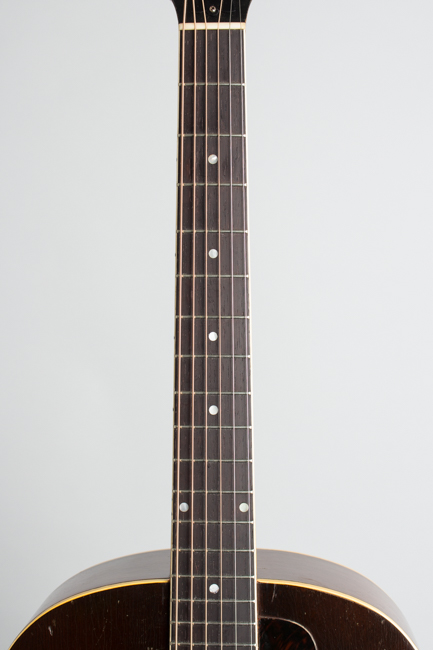 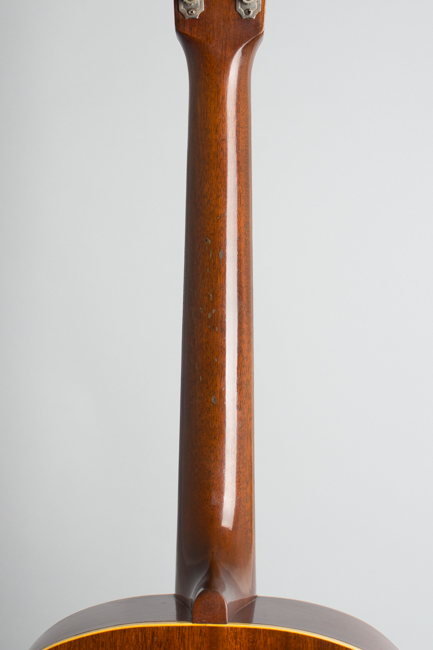 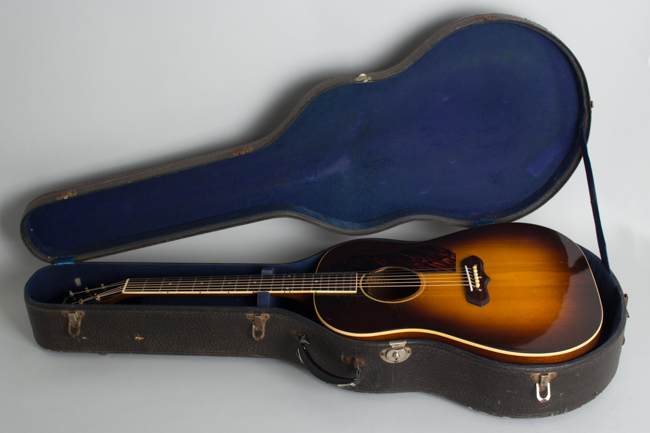 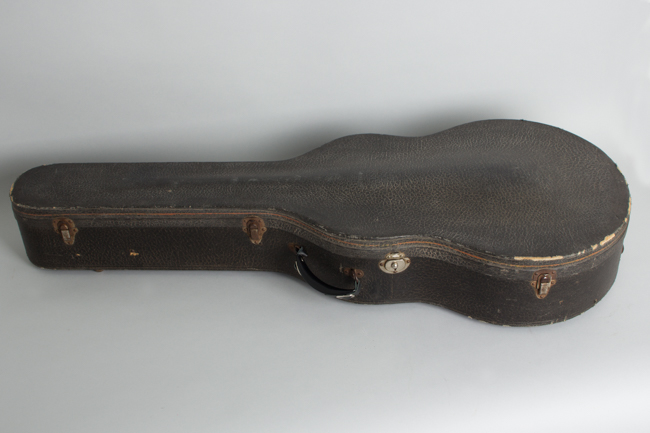 The J-55 remains one of Gibson's most engaging flat-top creations, a striking deluxe Jumbo flat-top available for only a short time just before WWII. This 16" round-shoulder model replaced the celebrated Advanced Jumbo in the line, selling at the somewhat lower price of $55.00 instead of $80.00. The J-55's features marked a return to a more Gibson-standard layout and did not continue the "AJ's" Martin-influenced long scale neck and rosewood body. With a spruce top, mahogany back and sides, and 24 3/4" scale, this J-55 is essentially a fancier J-35, with more upscale cosmetics including a pearl headstock logo and single-bound fingerboard. Distinctive appointments include a large carved two-tiered rosewood bridge and an unusual stepped-edge pickguard that covers the sound hole ring.

These unique features were shared with the equally rare SJ-100, both models being intended for the hard-strumming Cowboy singers of the era. This 1941 J-55 is slightly streamlined from the first 1939 version, with a straight-sided headstock in place of the odd "stepped" design used in 1939 and a new smaller bridge. The tuners are openback Klusons with plastic buttons, and the pickguard is made of the flashy Gibson "firestripe" celluloid seen only on pre-war instruments. This guitar plays perfectly and the sound is big, rich, and powerful, it rings out with plenty of punch and an epic sustain. With fewer than 400 of all variants built, the J-55 is an extremely rare guitar, and examples as finely preserved as this one are seldom encountered.

This guitar remains in fantastic original condition with only some light wear, most notably a few small dings and scrapes to the top finish. The back, sides, and neck finish are extremely clean. The guitar has had a superbly executed neck reset and period correct refret but no other notable repair work. The fittings are all original including the tuners, bridge pins, endpin, and truss rod cover -- there were modern repro tuners on at some point, but the original open-back Klusons have been seamlessly restored.

The original carved rosewood bridge was lowered just very slightly at some point, very neatly, and fitted with a new saddle. We rarely see Gibsons from this period in this level of preservation, as many were played hard for years. This one sounds as good as it looks, with the warm but punchy characteristic Gibson Jumbo sound. It includes a splendid original red-line HSC, with some wear to the edges. A fantastic piece of pre-war Gibson flat-top greatness and the nicest of this model we have ever had. Excellent Condition.
×